Thank you for following our coverage of Stoke City vs Bristol City on VAVEL. Keep visiting the VAVEL website to keep up to date with the world of sport.
11:56 AMa month ago

Match ends, Bristol City wins away win and moves up to mid-table position
11:47 AMa month ago

GOOOOOOOOOL FOR BRISTOL CITY! DASILVA SENDS THE BALL INTO THE BACK OF THE NET!
11:35 AMa month ago

Brown's cross shot ends up in the goalkeeper's hands.
11:25 AMa month ago

Forrester joined the attack and sent in a cross that was headed by Brown but again the ball ended up out of bounds.
11:18 AMa month ago

Stoke had another chance! Fletcher took a cross shot and his attempt ended in a goal kick for the rival goalkeeper.
11:10 AMa month ago

The second 45 minutes of the match begins, Stoke City and Bristol City continue to draw at the moment.
10:51 AMa month ago

The first 45 minutes of the match are over, Stoke City and Bristol City are tied at the moment by the minimum difference.
10:38 AMa month ago

Baker heads in from a corner kick but Bristol's defensive saga resolves brilliantly and clears the danger.
10:21 AMa month ago

Tymon sent a dangerous cross across the box but no Stoke player managed to make contact with the ball.
10:14 AMa month ago

Bristol City responds, Semenyo sends his shot just wide of the goalkeeper's far post for the first goal of the game.
10:06 AMa month ago

Brown's shot on goal ends up in the goalkeeper's hands
10:03 AMa month ago

The match between Stoke City and Bristol City kicks off, both teams will be looking for three more points at the end of the Championship campaign.
9:49 AMa month ago

In a couple of minutes we will start with the broadcast of Stoke City vs Bristol City, matchday 42 of the EFL Championship.
9:43 AMa month ago

On the other hand, Bristol City is in the lower part of the table but very close to enter the mid-table, like their similar team, the visiting team will not be able to be promoted to the Premier League this season and will have to look for another opportunity until the next one.
9:38 AMa month ago

At the moment Stoke City is located in mid-table with 55 points, having 15 wins, 10 draws and 16 defeats. Despite being in a regular zone, this result is bad because the hopes of fighting for a ticket to the Premier League are over and the best they can aspire to in this closing of the campaign is to climb one more place.
9:29 AMa month ago

This is the starting eleven that Bristol City sends to the field to face Stoke City. 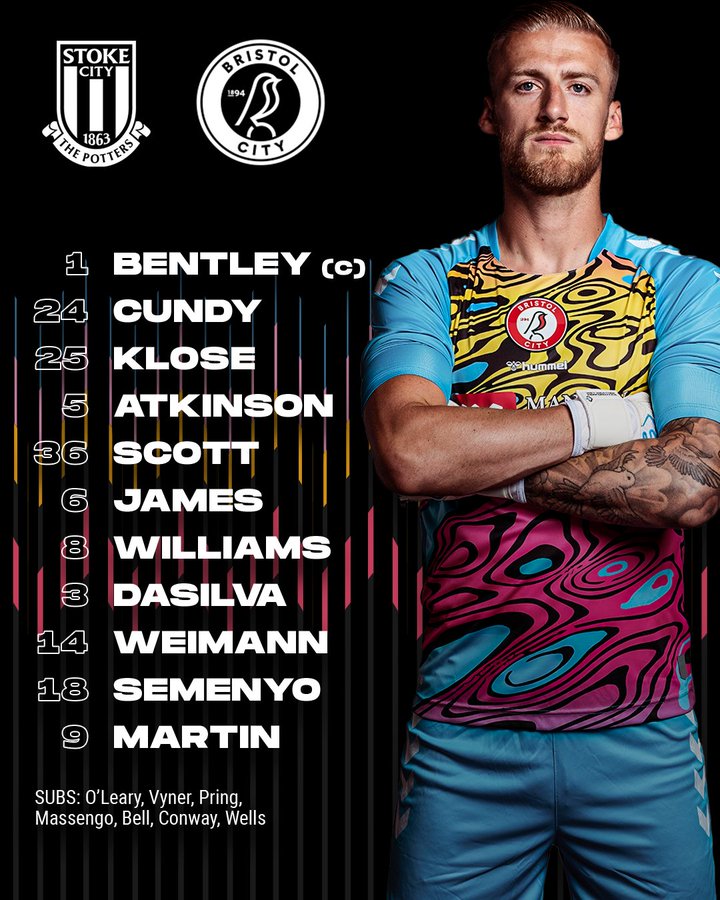 This is the starting eleven that Stoke City sends to the field to face Bristol City. 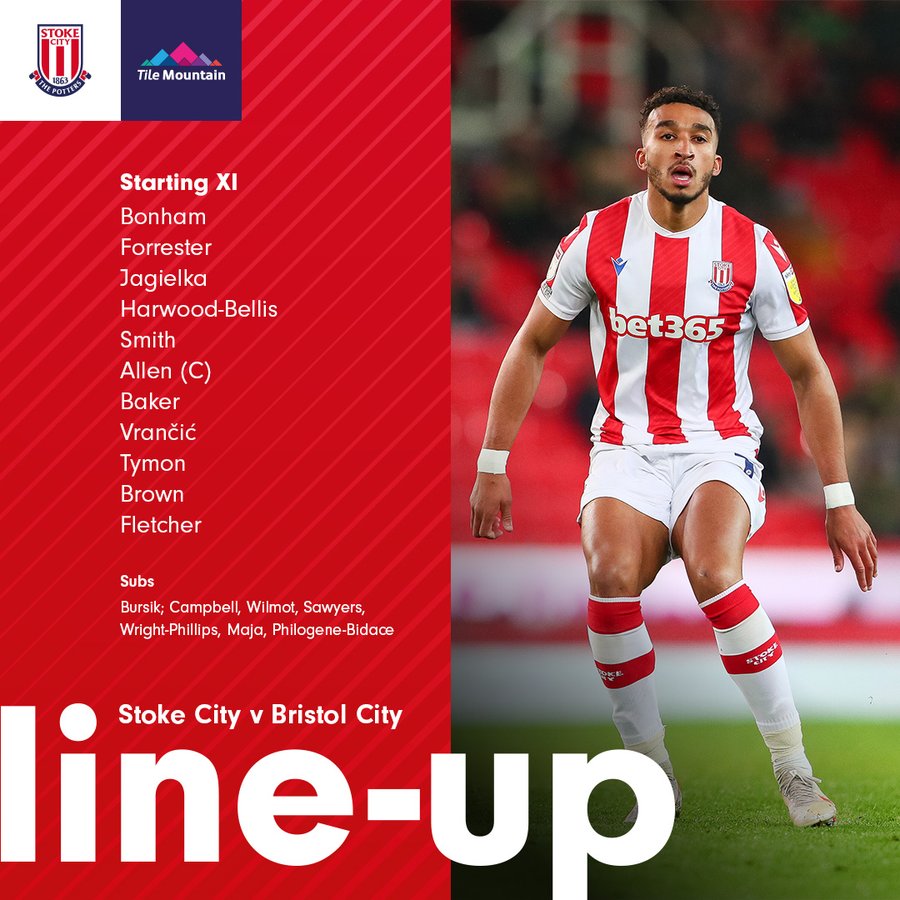 The last time the two teams met was on November 24, 2021, that match ended with the score in favor of Stoke City by the minimum difference. Bristol City is the clear favorite, however, Stoke is currently the one who comes in a better moment to this match.
9:01 AMa month ago

The wait is over in the English Football League Championship, round 42 kicks off and the teams are only 4 rounds away from the end of another season. For Stoke and Bristol City, this duel and the 3 remaining ones will be a compromise because neither can be promoted to the Premier League and they will have to spend another season in the Championship in the search of one day having the ticket that will take them directly to England's top circuit.
12:45 PMa month ago

Do not miss a detail of the match with the live updates and commentaries of VAVEL. Follow along with us all the details, commentaries, analysis and lineups for this Stoke City vs Bristol City match.
12:40 PMa month ago

What time is Stoke City vs Bristol City match for Football League Championship?

This is the start time of the game Stoke City vs Bristol City of 15th April in several countries:

Watch out for this Bristol City player:

One of the pillar players in Bristol City's midfield, Andreas Weimann will be the player to watch throughout the 90 minutes. The experienced midfielder will have the mission to give creativity and depth to the team, to look to hurt the rival team and try to collaborate with the three points for this game. 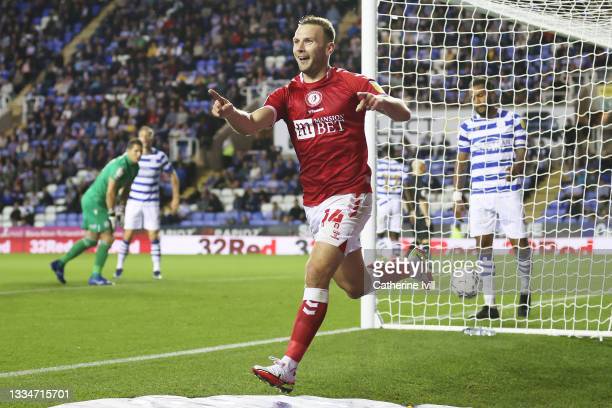 Watch out for this Stoke City player:

The player to watch for that game will be Jacob Brown, Stoke City's killer and goal scorer who has been a future to follow to one day be signed by some Premier League side. Last game he scored a goal and broke the nets, so any time he could break the nets in favor of Stoke City and give them 3 points from this duel. 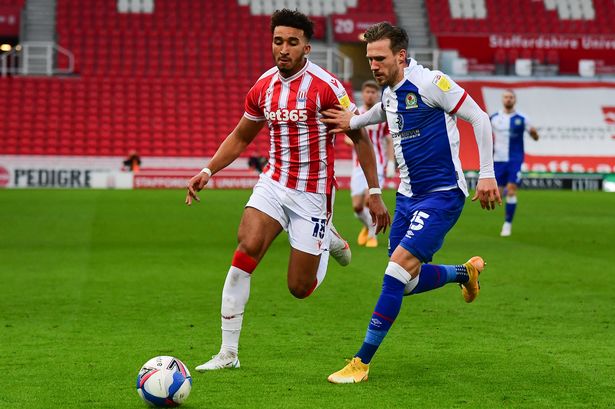 Stoke City and Bristol City have met 57 times (24 wins for Stoke City, 15 draws and 18 wins for Bristol City) where the balance is in favor of the home side. In terms of goals scored, it is Stoke City who have the advantage with 75 goals to Bristol City's 70 goals. Their last meeting dates back to matchday 19 of the Championship where Bristol City won by the minimum difference.
12:10 PMa month ago

Britannia Stadium is a soccer stadium in Stoke-on-Trent, England. This is the home ground of Stoke City. The club had played at Victoria Ground until 1997 and the move was the brainchild of then chairman Jez Moxey. The club manager at this time was Chic Bates. It was initially a shared ownership between Stoke City, Stoke-on-Trent City Council and Stoke-on-Trent Regeneration Ltd. However, Stoke City bought the entire stadium property in a GBP 6 million deal dated December 2007.

In the first match of an official nature played at this stadium was against Rochdale FC in the Worthington Cup in front of 15 439 spectators and its result was 1-1, and four days later, the first League match took place against Swindon Town in front of a crowd of 23 859 spectators in which the Potters would end up losing the match 1-2.

Looking to close in the best way

Bristol City is in 19th place in the general table with 55 points from 12 wins, 9 draws and 20 defeats. They also average a total of 52 goals for and 73 goals against, which leaves them with a negative goal difference of 21 goals. For this team, the opportunity to fight for promotion to the Premier League is lost, however, they can still close the season in a good way and try to finish in the 11-15 positions overall.
12:00 PMa month ago

Looking to break into the top 10

Stoke City is in the mid-table zone, specifically in 15th place overall with 55 points that have been the product of 15 wins, 10 draws and 16 defeats, also, in the statistics they have 53 goals and 47 goals against, a situation that leaves them with a difference of -6. Stoke City has chances to enter the top 10 of the Championship if they close with a victory all their remaining matches of the season and finish this campaign in a good way even if they do not enter the play offs for the pass to the Premier League.
11:55 AMa month ago

The season is coming to an end

The Championship is about to come to an end after 41 games played, 7 remain to define the team that will be promoted to the Premier League and those that will fight in a final phase tournament to return to the top league of soccer in England. For Stoke City and Bristol City, this will be only one match per commitment as well as the 7 remaining matches, since being in mid-table places and with a huge difference compared to the first places, they cannot think about being promoted to the Premier League this season, their opportunity will have to be reconsidered for the next one where they will try to achieve that dream that for now will be impossible.
11:50 AMa month ago

The Stoke City vs Bristol City match will be played at the Britannia Stadium, in Stoke City, England. The kick-off is scheduled at 10:00 am ET.
11:45 AMa month ago