The match ends. The referee blows the final whistle and Guadalajara gets the three away points.
12:02 AMa month ago

Corner kick for the home team
11:57 PMa month ago

Miguel Ponce takes a shot that Jurado saves by lying on his right side.
11:42 PMa month ago

Free kick in favor of La Máquina.  Rómulo Otero gets the cross on two occasions and Uriel Antuna gets the corner kick on the second play.
11:37 PMa month ago

Free kick in favor of Cruz Azul. La Máquina tries to take advantage of the opportunity but can't find the space.
11:22 PMa month ago

Expulsion for Alexis Vega, the Chivas 10 leaves the game after seeing the red card.
11:12 PMa month ago

Jurado sends the ball to a corner kick after an approach from Guadalajara
11:07 PMa month ago

GOAL. Cristian Calderón capitalizes on a corner kick and headers it into the net.
10:52 PMa month ago

Hiram Mier takes a corner kick for Chivas, but Jurado keeps the ball out with two hands.
10:42 PMa month ago

Newcomer Alejandro Mayorga gets the preventive catón
10:37 PMa month ago

Angel Romero surprises with a mid-range shot but the ball goes out of bounds.
10:32 PMa month ago

The second half begins.

The first half ends. Celestes and rojiblancos draw goalless in the first half.
10:22 PMa month ago

Vega makes a mistake! The striker gets the ball from three quarters of the field and in front of a hasty exit of Jurado he has the goal alone and misses it.
10:17 PMa month ago

2 minutes of compensation are added
10:12 PMa month ago

Off-side. Alexis Vega sent the first goal for the visitors into the net, but the flag flag flag indicates off-side.
10:07 PMa month ago

He misses it! Zaldívar has a one-on-one with Jurado but the goalkeeper comes out to press and the striker sends the ball into the stands.
10:02 PMa month ago

Antuna runs down the right and puts in a high cross that finds no one in the area to be finished off.
9:57 PMa month ago

Tight game in the center circle, misplaced passes on each side
9:52 PMa month ago

Iván Morales tries a mid-range shot but the ball goes wide of the crossbar.
9:47 PMa month ago

Uriel Antuna's cross is deflected by a header from the center back La Máquina gets another corner kick
9:42 PMa month ago

Free kick for Cruz Azul. Uriel Antuna takes the kick but Calderón sends it for a corner kick.
9:32 PMa month ago

The pace of the game slows down a bit and the home fans try to get their team back into the game.
9:27 PMa month ago

Angel Romero gets the ball in midfield and tries a diagonal into the box but Orozco's leg prevents him from passing.
9:22 PMa month ago

Another corner kick for La Máquina that does not result in a foul in favor of the visitors.
9:17 PMa month ago

Cruz Azul takes a corner kick. Antuna sends the cross but the rojibanca defense rejects it and initiates the counterattack
9:12 PMa month ago

Set piece for Cruz Azul, Ángel Romero takes the ball but Alvarado can't make the reception in the area.
9:07 PMa month ago

Goalkeeper! Jurado has his first intervention of the match after deflecting a counter generated by Alexis Vega.
9:02 PMa month ago

Cruz Azul gradually gained possession of the ball and tried the flanks to invade the opposing goal.
8:57 PMa month ago

The match kicks off, the ball is rolling at the Azteca Stadium.
8:52 PMa month ago

We are just a few minutes away from Perez Duran blowing his whistle to start the match, so stay tuned for the minute-by-minute coverage!
8:47 PMa month ago

The teams have taken to the field for warm-up exercises prior to the whistle. 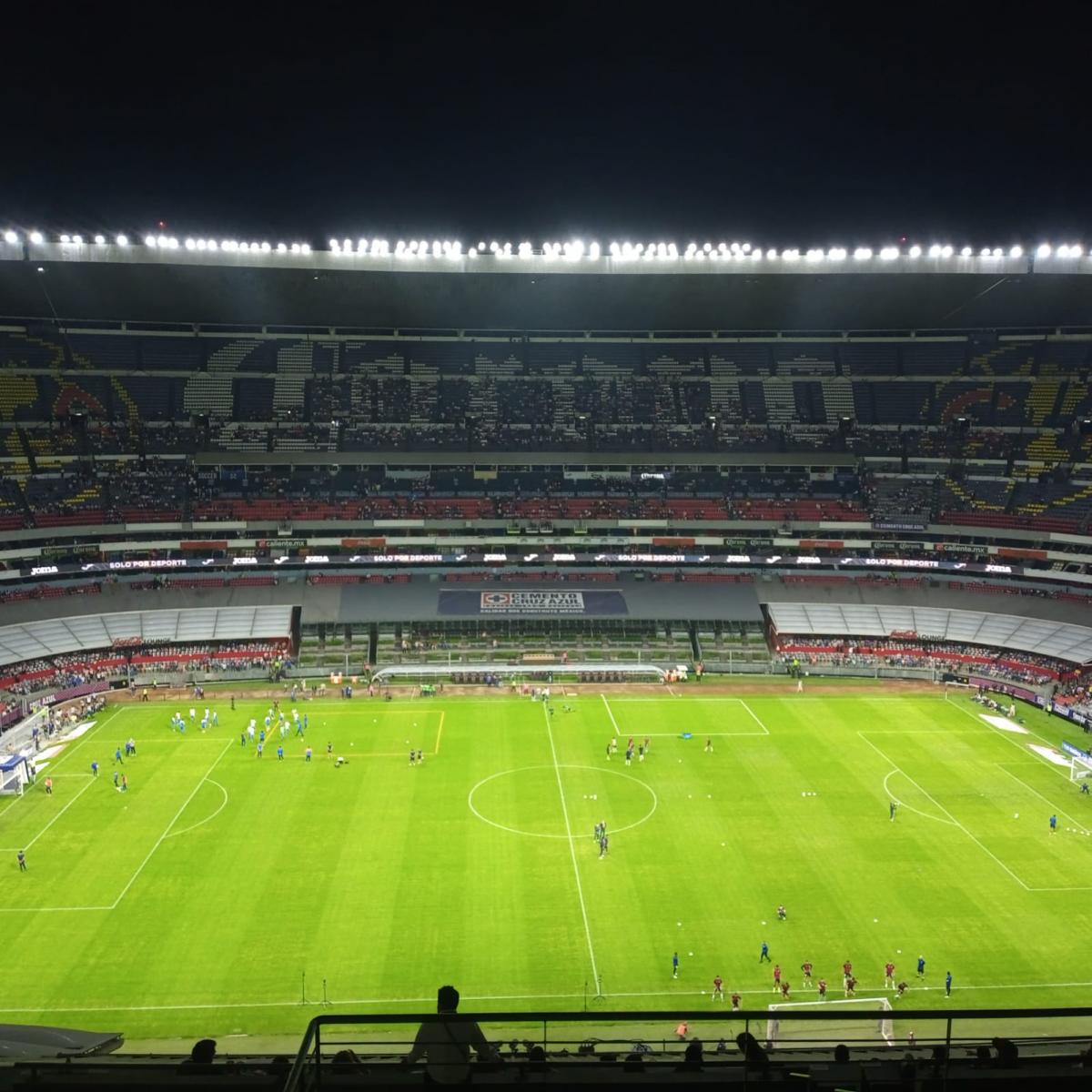 The Celestes are also already in the building. Sebastián Jurado and Adrián Aldrete lead the Cementera's arrival.

Chivas are already at the Azteca Stadium

El Rebaño is already at El Coloso de Santo Ursula, the red and white team needs to lift its spirits within the group and getting the three points would be a great achievement.

In the history of matches between the two teams, the numbers are very similar: out of 57 encounters, Cruz Azul dominates with 17 victories to 16 for the red-and-whites with 24 ties and 77 goals for each side. 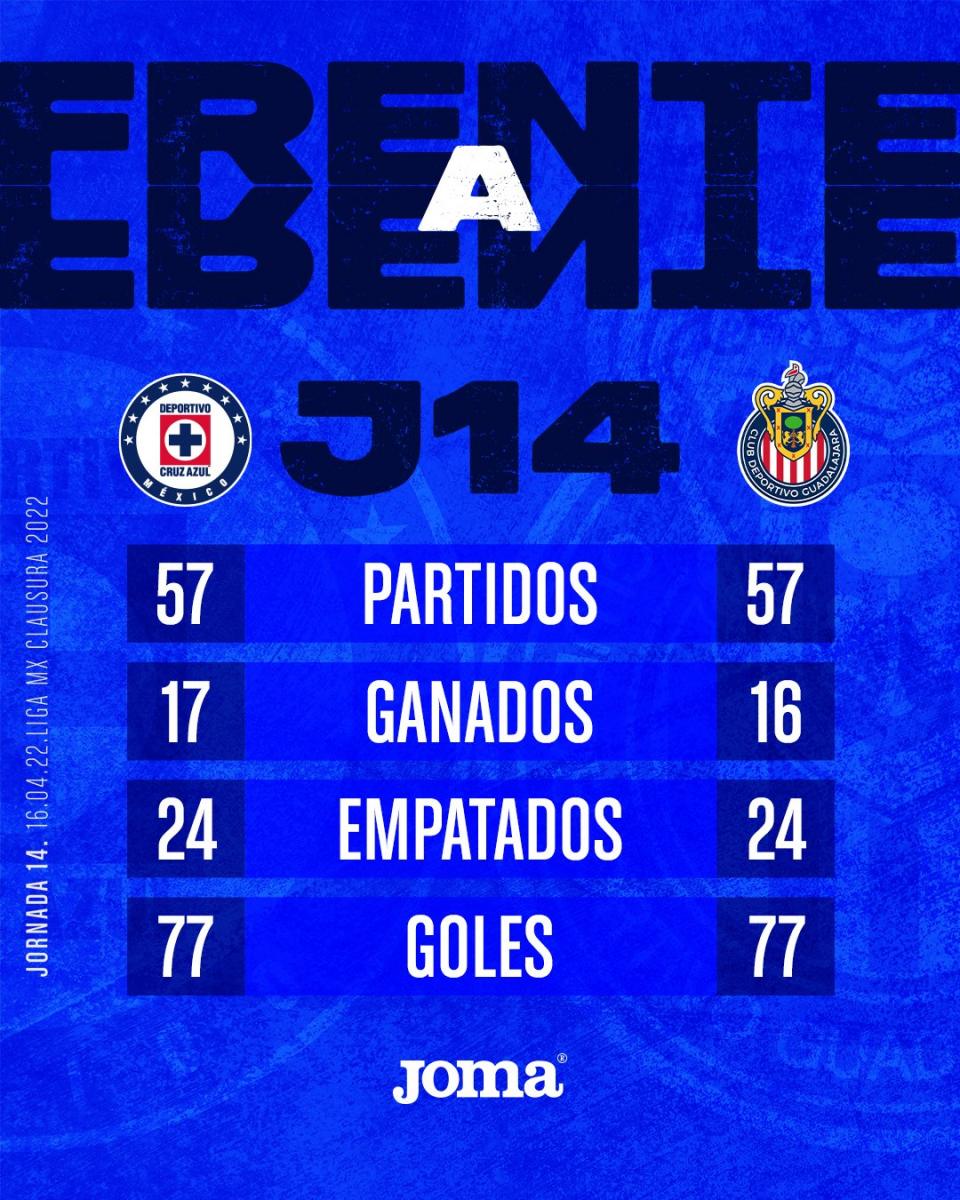 Bad news for the celestial arc

Everything indicates that Jesús Corona is far from recovering and there are rumors that the veteran will have to undergo surgery, which means that he will not only be out of action against Chivas, but will also miss the Clasico Joven and the closing game of the tournament. Juan Escobar continues to be a doubt for tonight
7:57 PMa month ago

Chivas also pointed out that several media outlets participated in a non-active way in generating violence by creating a hostile environment. The treatment of information by some media outlets has been the subject of discussion as to how much responsibility and influence they have in these types of issues.

In a tense atmosphere following yesterday's acts of violence at the Red and White's training camp, and the unfortunate events at La Corregidora a few weeks ago that set off alarm bells in Liga MX, a security operation of 1,800 CDMX police officers was deployed for Cruz Azul vs Chivas.
7:47 PMa month ago

Please continue with us and do not miss a detail of the match Cruz Azul vs Chivas live updates and commentaries of VAVEL.
7:42 PMa month ago

How to watch Cruz Azul vs Chivas Live Stream on TV and Online?

If you want to watch the game Cruz Azul vs Chivas live on TV, your options is: TUDN.

What time is Cruz Azul vs Chivas match for Liga MX?

This is the start time of the game Cruz Azul vs Chivas of 16th April 2022 in several countries:

Although violent acts continue to be condemned after what happened in Querétaro on previous days, soccer-related violence was once again present. This time with Chivas fans as the main actors. Guadalajara traveled to the country's capital to face the Cementeros and upon their arrival it was strange that the fans did not accompany them to their hotel. On Friday night, a group of fans arrived at the hotel to demand better results from the team. In response, several players went out to talk to the fans, but the situation got out of control and the members of the red and black supporters' club overcame the security, causing vandalism inside the hotel and taking the dialogue with the players to a more intimidating tone. Chivas immediately issued a statement condemning any type of violence. It should be noted that according to recent security and violence prevention measures taken by the FMF, the entry of visiting supporters' clubs is prohibited in Mexican soccer.

Following Cruz Azul's elimination from the semifinal of the CONCACAF Champions League at the hands of Pumas de la UNAM, the team issued a statement announcing the arrest of Joaquín "N", technical assistant to Juan Reynoso. The arrest took place while the former manager of La Máquina was on his way to the Azteca Stadium on the day of the match. The bulletin states that the club was unaware of the legal proceedings that had been brought against its collaborator since 2018. Everything indicated that little by little, the off-field problems were moving away from the team's atmosphere after several months of calming the waters with the issue of Guillermo "Billy" Álvarez, however, once again the distractions for the Celeste team come from outside at a critical moment of the tournament, so Juan Reynoso must take care of the team's interior from any distraction.
7:12 PMa month ago

José Juan Macías returned to Mexico after his time with Getafe to join the Red and White ranks and although he has not been able to consolidate his place in the starting lineup, he has been able to help the team by scoring two goals. Due to the drought of results for El Rebaño, J.J. can be an important man in the attack of the "tapatíos". 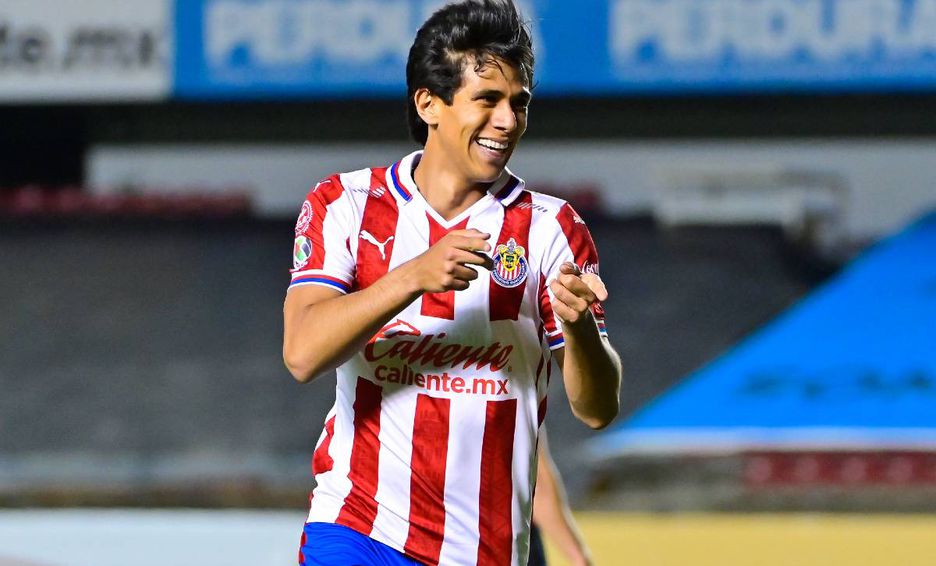 Christian Tabó arrived to reinforce La Máquina at the beginning of this Clausura 2022 after a magnificent season with Puebla, however, the number 11 jersey had not been able to show regularly with the team due to a couple of injuries, in this closing of the campaign for the sky-blue team, the charrúa will be able to demonstrate if he is the "killer" of the area that Reynoso has missed so much since the departure of Jonathan Rodríguez. 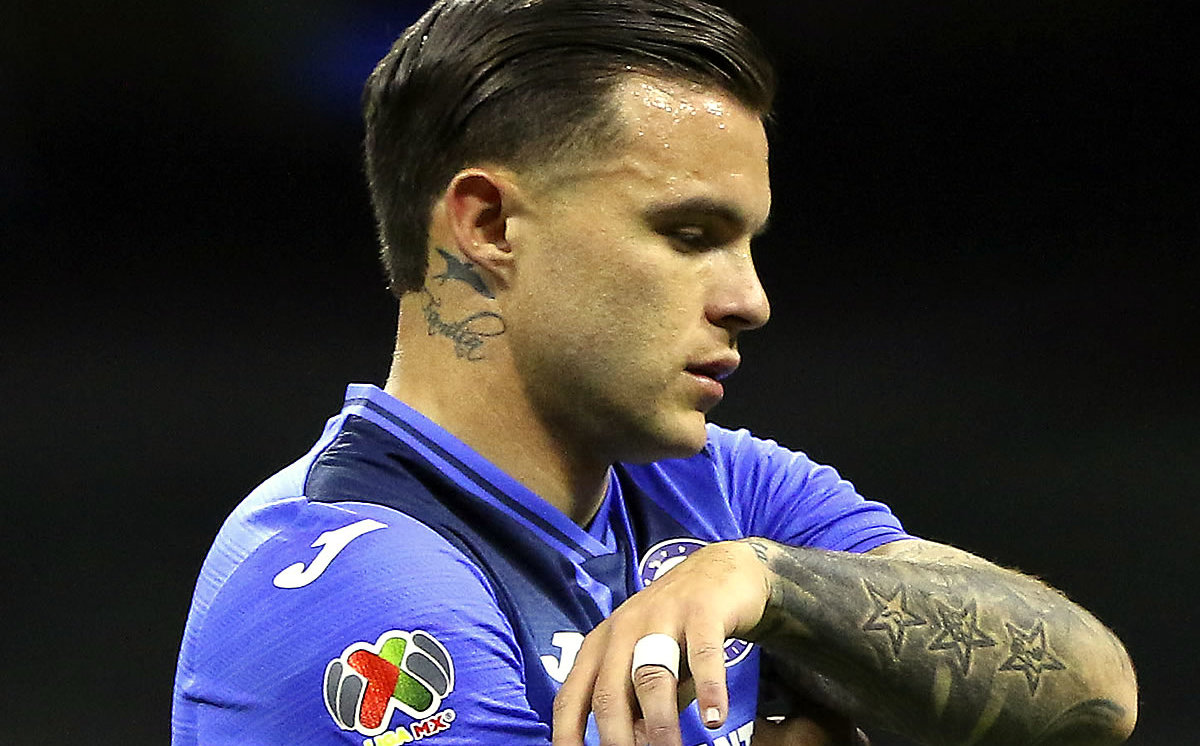 Chivas is facing a very complicated situation and it seems that things are not going in the best way at the Rebaño Sagrado. Given the poor results of the campaign, the team is in 15th place in the table, which is why the board of directors decided to dispense with the services of Marcelo Michel Leaño as the team's coach, leaving the Guadalajara club in an even more vulnerable position with just three dates left before the end of the Clausura 2022. Club Deportivo Guadalajara has only managed to win on three occasions this season, drawing and losing on five occasions. The negative statistics do not stop here, in addition to the fact that the team has a goal difference of -1, with 18 goals scored for 19 conceded, and that during the six visits they have made, they have only been able to win in one of them, tying three times and losing twice. Guadalajara will have to play a perfect game in order to salvage points from the Azteca Stadium.
6:57 PMa month ago

Cruz Azul welcomes La Perla Tapatía to the Coloso de Santa Ursula with only three games remaining in the regular phase of the Mexican tournament. La Máquina remains in a comfortable position in sixth place; however, it is a reality that La Máquina's play has been declining, leaving much to be desired by its fans. The Celestes have 21 points with six wins, three draws and four defeats. They have scored 19 goals and conceded 15. During the 7 home games they have received, they have won 4 of them.
6:52 PMa month ago

Columbus vs LAFC, and weather; lose 0-2 at home 6 hours ago