Thank you very much for joining us for the Athletic vs Celta LaLiga match. Follow the sports information on VAVEL.com.
2:24 PMa month ago

Nico Williams (Athletic) gets in a shot on goal but the goalkeeper comes out to prevent Athletic from scoring.
2:22 PMa month ago

Nico Serrano (Athletic) tries to score for his team with a header but it ends up in the goalkeeper's hands.
2:16 PMa month ago

The VAR has decided that the ball was cleanly removed and does not call a penalty.
2:15 PMa month ago

VAR was called for an alleged penalty kick in favor of Berenguer (Athletic).
2:13 PMa month ago

Nico Serrano (Athletic) gets in a great run but is denied by a Celta rebound.
2:12 PMa month ago

Galán (Celta) starts a dangerous move that he passes to Brais, who passes to Nolito, who shoots unsuccessfully.
2:09 PMa month ago

Missed shot by Aidoo (Celta) following a pass from Beltrán.
2:03 PMa month ago

Aidoo (Celta) has a header following a corner but it misses the target.
1:50 PMa month ago

Dituro (Celta) clears an Athletic set piece with his fists.
1:40 PMa month ago

Kevin Vázquez (Celta) is shown the yellow card for a foul on Muniain (Athletic).
1:36 PMa month ago

The second half begins in San Mamés.
1:20 PMa month ago

End of the first half

Total dominance of the visiting team as Athletic has made many mistakes in defense that have already cost them two goals against.
1:18 PMa month ago

End of the first half with no minutes of added time.
1:17 PMa month ago

Corner for Athletic.
1:15 PMa month ago

GOOOOOOAL FOR CELTA, the dominance is reflected in the result and Fran Beltrán shoots from distance after a pass from Denis Suárez.

Celta's dominance is clear despite Athletic's attempts.
1:04 PMa month ago

Brais (Celta) had a strong shot at goal but it went wide.
12:59 PMa month ago

Celta does not allow Athletic to get into their own half.
12:56 PMa month ago

Sancet (Athletic) follows up a cross following a corner kick.
12:52 PMa month ago

Sancet (Athletic) has a left footed shot that skims the post and goes wide.
12:47 PMa month ago

Berenguer (Athletic) shot that ends up in the goalkeeper's hands.
12:44 PMa month ago

GOOOOOOOOOOAL FOR CELTA, Iago Aspas finishes with everything after a pass from Brais Méndez.
12:40 PMa month ago

Cervi (Celta) fails to finish after a pass from Yeray.
12:38 PMa month ago

The teams take the field to begin the ceremonial acts.
12:27 PMa month ago

It will be a very close match because they are only nine points apart. Due to their positions, Athletic is likely to win.
12:16 PMa month ago

The designated judge for this match is Alejandro José Hernández.
12:14 PMa month ago

The teams are already in the dressing rooms to begin warm-up exercises.
12:01 PMa month ago

In 45 minutes the match will start in San Mames. Both teams have already confirmed their line-ups.
1:30 AMa month ago

In a few moments we will share with you the starting lineups for the Athletic vs Celta live match, as well as the latest information from the San Mamés Stadium. Don't miss a single detail of the live match updates and commentary from VAVEL's coverage.
1:25 AMa month ago

How to watch Athletic vs Celta Live Stream on TV and Online?

If you want to watch Athletic vs Celta live on TV, your options are: DirecTV Sports.

If you want to watch it directly by streaming: DirecTV

What time is Athletic vs Celta for LaLiga?

This is the start time of the game Athletic vs Celta of April 17th 2022 in several countries:

In the last eight meetings between the two teams, three have been won by Athletic, two by Celta and the other three have ended in draws.
1:10 AMa month ago

Iago Aspas continues to be Celta's man of the match. The 34-year-old striker has 13 goals and four assists in 30 games.
1:05 AMa month ago

Iñaki Williams is the team's leading scorer. The 27-year-old Spaniard has seven goals and three assists on the season and has played in all 31 games of the tournament.
1:00 AMa month ago

Celta are not far behind their opponents. They are four places lower, in 12th place with 36 points, but they have not won since March 6 and have already accumulated three defeats and a draw.
12:55 AMa month ago

The Bilbao team is in eighth place in the table with 45 points. They are coming from an uneven streak: two draws, two wins and one loss.
12:50 AMa month ago

This match will be played at the San Mamés stadium in Bilbao, Spain. It has been the home of Athletic Club since 1913 when it was still the old San Mamés. It has a capacity of 53,331 spectators. 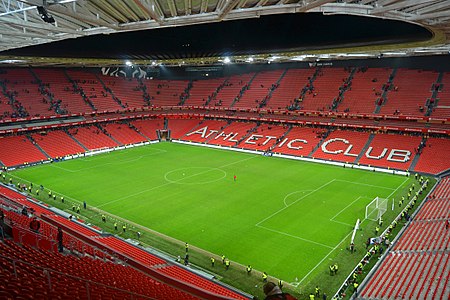 Welcome to VAVEL.com's coverage of the LaLiga: Athletic vs Celta Live Updates!