FOR4
END2 hours ago

Thanks for following this match on VAVEL USA. Until the next time!
12:04 AM25 days ago

The match ended in a goalless draw. América enters the playoffs directly after this result.
11:59 PM25 days ago

Cruz Azul: Pablo Aguilar is injured and Uriel Antuna are out; Alejandro Mayorga and Rodrigo Huescas are in.
11:44 PM25 days ago

OCHOA! A mistake in Jorge Sánchez's exit, where Antuna picks up the ball and gets into the box, but Ochoa dives and deflects the shot.
11:42 PM25 days ago

América: Pedro Aquino and Federico Viñas are out; Jonathan Dos Santos and Henry Martín are in.
11:40 PM25 days ago

Juan Otero turns around to take a shot inside the box, but Jurado deflects his shot for a corner kick.
11:38 PM25 days ago

América: Álvaro Fidalgo and Alejandro Zendejas are out; Salvador Reyes and Juan Otero are in.

Cruz Azul: Ángel Romero and Juan Escobar are out; Christian Tabó and Rafael Baca are in.

POST! Cruz Azul is saved. Corner kick by América where Aquino's header hits the post. On the rebound, Jurado makes a save to prevent the goal.
11:27 PM25 days ago

Richard Sanchez takes a free kick that was headed straight for goal, but Jurado covers his goal well and keeps the ball.
11:24 PM25 days ago

First minutes of the second half. Cruz Azul looks more proactive up front.
11:19 PM25 days ago

The referee adds two more minutes to the first half.
10:51 PM25 days ago

Medical assistants come in to attend to Escobar and Fuentes after a clash of heads.
10:51 PM25 days ago

Sanchez! Richard's shot is straight at the left corner, but goes just wide of the goal.
10:47 PM25 days ago

Yellow card for Álvaro Fidalgo for a foul on Erik Lira.
10:40 PM25 days ago

Yellow cards for Iván Morales and Richard Sánchez for complaining.
10:39 PM25 days ago

Romero turns and fires a shot on the edge of the box that goes just wide of the left post.
10:37 PM25 days ago

Half an hour into the match. América advances better armed but there is not much precision to shoot at goal. Cruz Azul still can't get forward with clarity.
10:35 PM25 days ago

Diego Valdés' header is saved by Jurado to keep the ball.
10:24 PM25 days ago

First quarter of the match. Cruz Azul has been more lively going forward, but both goals have not been in danger.
10:19 PM25 days ago

Romero was confident and sent a powerful shot that went over the goal.
10:16 PM25 days ago

Yellow card for Pedro Aquino after a foul on Rivero.
10:12 PM25 days ago

First minutes of the match, América has possession.
10:07 PM25 days ago

Both teams are already on the field of the Azteca Stadium doing warm-up exercises prior to the match that is just minutes away. 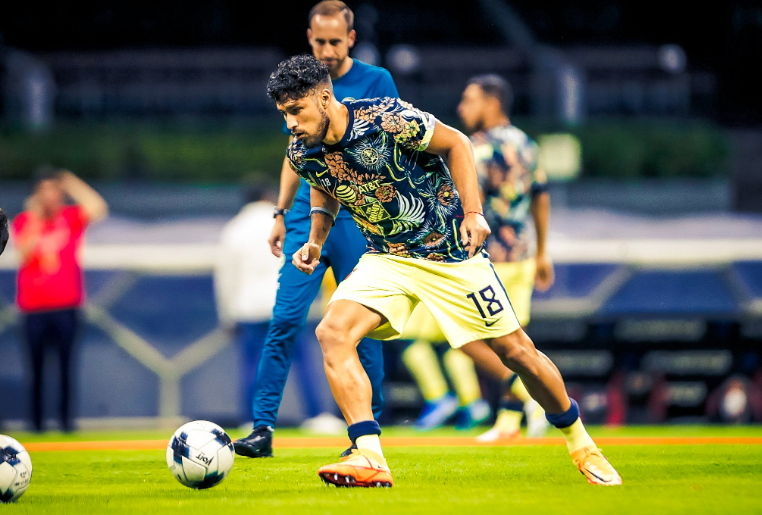 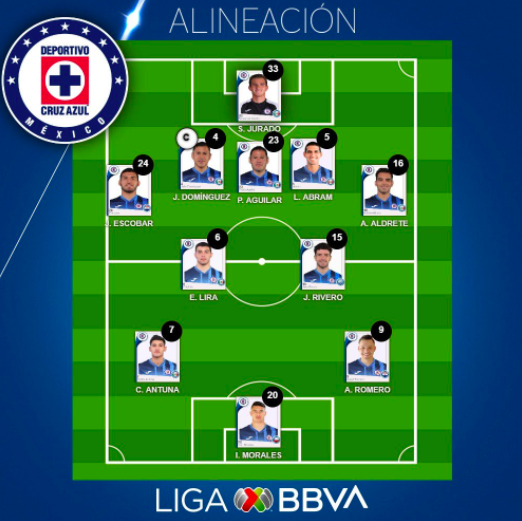 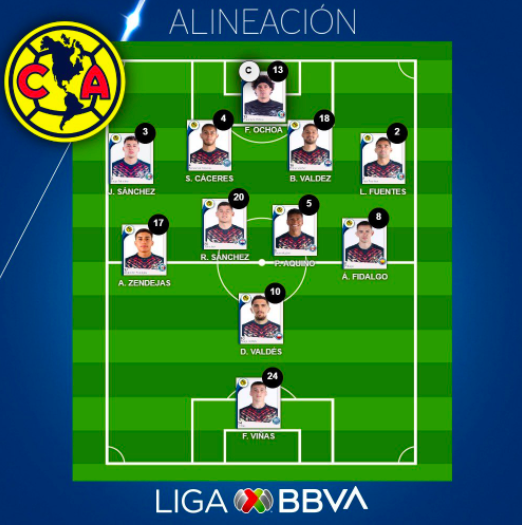 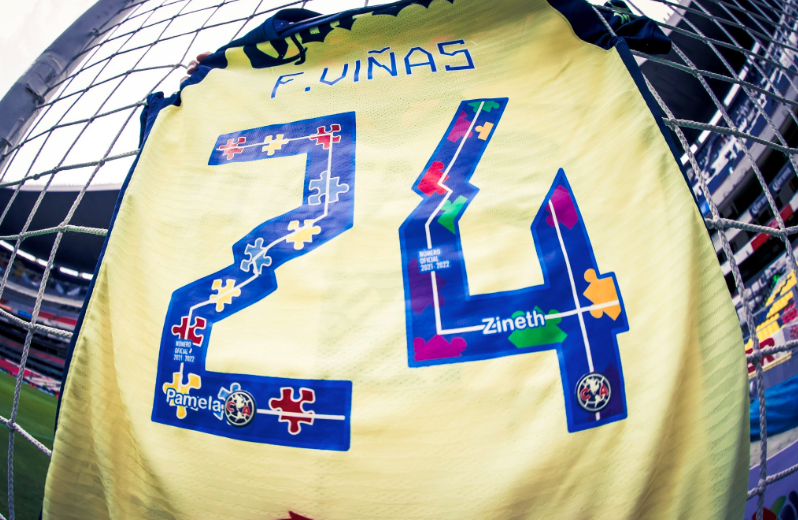 Players who have played for both clubs

Both América and Cruz Azul have already arrived at the Azteca Stadium for the match that is just minutes away. 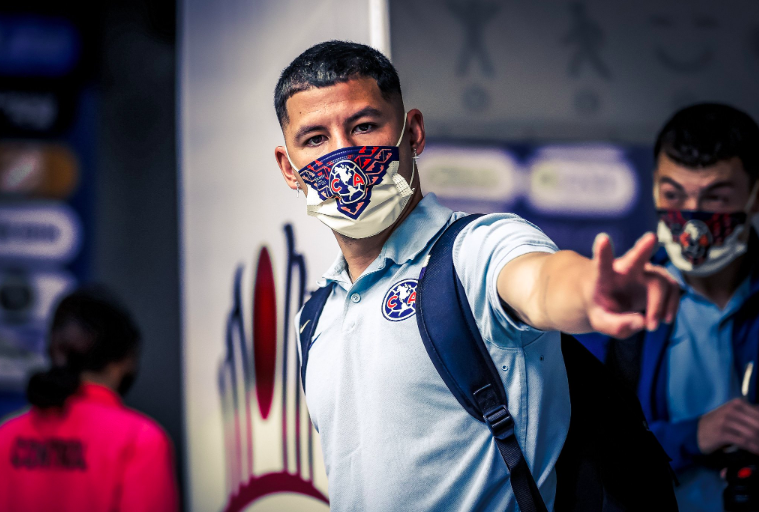 América and Cruz Azul have met 67 times in short tournaments. In this history, the Águilas have won 27 times, drawn 21 and lost 19. In these matches, goals abound and a total of 171 goals have been scored: 91 by América and 80 by Cruz Azul. In their most recent match, La Máquina won last October by a score of 2-1.
9:09 PM25 days ago

The Azteca Stadium is a soccer stadium located in Mexico City, and has a capacity of just over 87,000 spectators, making it the largest in Mexico, the third largest in the continent and the eleventh largest in the world. This stadium hosts Club América and Cruz Azul matches, so today both teams will feel at home in this edition of Clásico Joven. 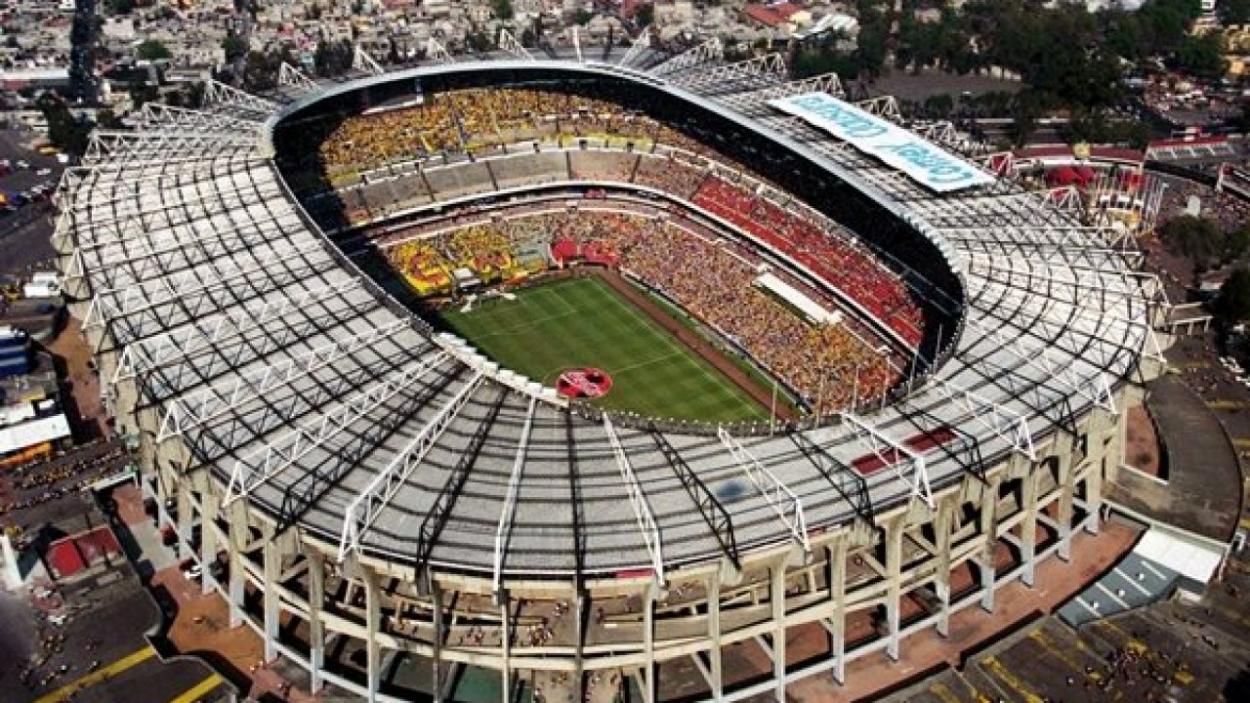 We are just under an hour away from another edition of the Clásico Joven kicking off at the Estadio Azteca. A match where more than three points are at stake since both teams can qualify directly, so both will be out to win. Will Fernando Ortiz's Aguilas be able to accumulate their seventh win in a row or will Reynoso's Cruz Azul ruin their plans? Follow our coverage on VAVEL USA.
7:33 PMa month ago

Do not miss a detail of the match America - Cruz Azul with the live updates and commentaries of VAVEL. Follow along with us all the details, commentaries, analysis and lineups for this match.
7:28 PMa month ago

How to watch America - Cruz Azul Stream on TV and Online?

If you want to watch the game America - Cruz Azul live on TV, your options are: TUDN USA and Univision

If you want to directly stream it: TUDN USA App and Univision Now

Santiago Gimenez | The Mexican striker was called up to the national team this week and may not see many minutes in this match, however, he is in charge of the Cementero attack along with Uriel Antuna, with whom he has been a good teammate. Santi has 3 goals and 1 assist in the current tournament and will be looking to increase his goalscoring quota because if Cruz Azul wants to win, it will have to get back to scoring. 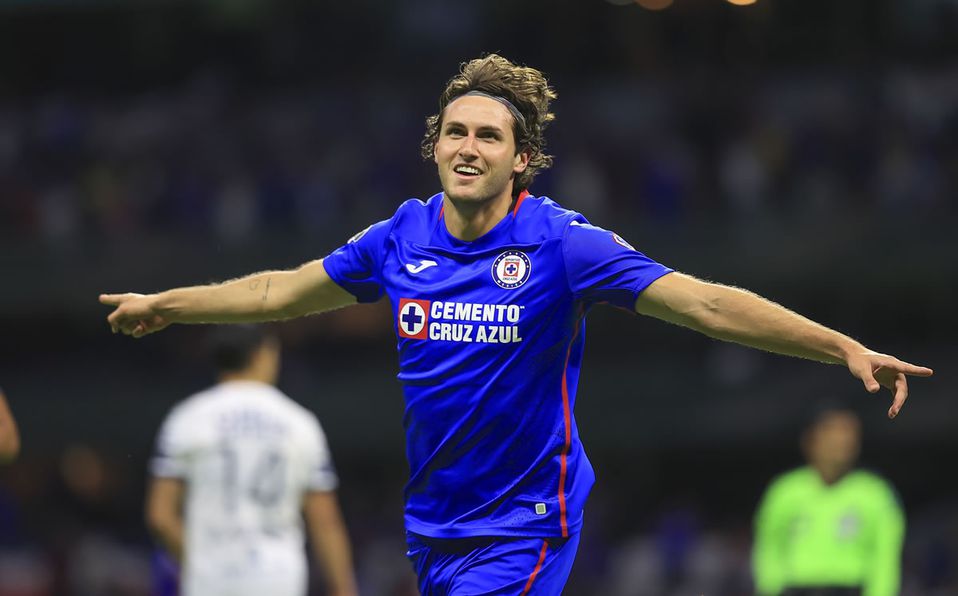 Diego Valdes | Although he struggled to adapt to the Azulcrema team at the beginning of the tournament, in the most recent match against Tigres he contributed with a great goal and was the man who gave fluency to the attack, so if he can return to the level he had with Santos, he will be a key element for the Águilas in the playoffs. This Chilean player has responded to pull the strings in the midfield. In the last match he scored a goal, had 5 shots and 3 crosses. 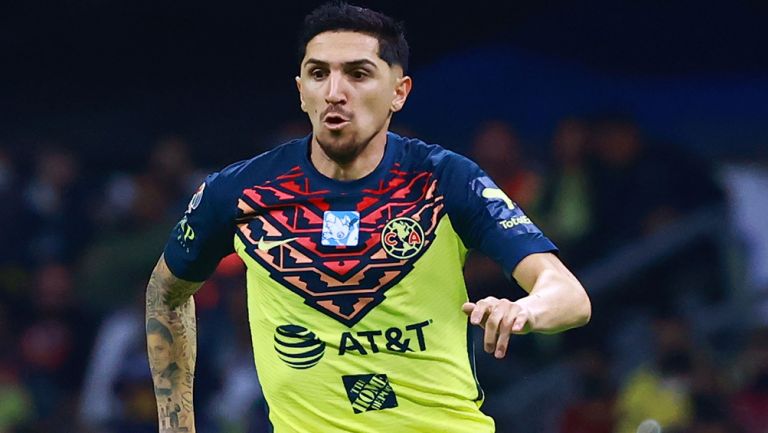 Cruz Azul: Back to winning ways

On the other hand, the Celeste team, led by Juan Reynoso, is going through a totally different moment than the Eagles of America. Unlike their archrivals, La Máquina started off well, but with the passing of the matchdays and after the failure in the Concachampions League, Cruz Azul has been fading in this final stretch of the tournament where it has registered 4 points out of a possible 12 in the last four matches. The Celestes are coming off a surprise defeat at home to Atletico de San Luis, their sixth loss in a row. They are currently below America in sixth place with 24 points from 7 wins, 3 ties and 6 losses. 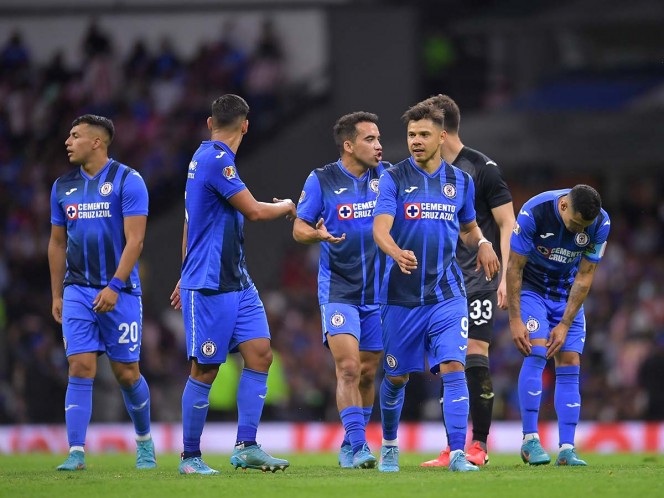 From hell to heaven in a matter of matchdays, that is how the Clausura 2022 tournament has been for the América eagles, who hit rock bottom almost halfway through the tournament and found themselves at the bottom of the table. However, thanks to Fernando Ortiz, the Azulcrema team is beginning to see the light and wants to build on its six-game winning streak. The Águilas need a win to be able to aspire to a possible direct play-off spot, but they would have to wait for results from Puebla and Atlas. America is currently in fifth place, with seven wins, four draws and five defeats, accumulating 25 points. In their most recent match, the Azulcremas went to the university stadium to snatch three points from Miguel Herrera's Tigres in a 2-0 win. 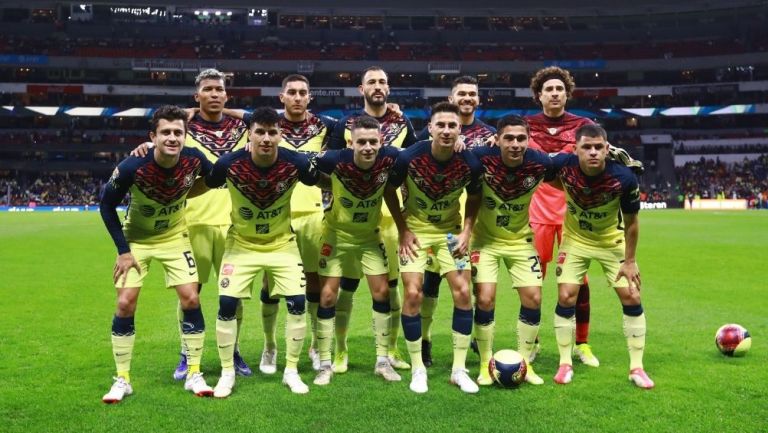 The America - Cruz Azul match will be played at the Stadium Azteca, in CDMX, Mexico. The kick-off is scheduled at 10:00 pm ET.
6:43 PMa month ago

The month is coming to an end and with it the regular phase of the Grita México Clausura 2022 tournament. Tonight, Saturday's activity, corresponding to matchday 17, will feature a very attractive and even match in the country's capital. The Azteca Stadium will be the venue for a match in which two teams will be looking for the three points and the chance to qualify for the Playoffs; without a doubt, a spicy touch for this Clasico Joven. On the one hand, America will need to take advantage of their good run against Cruz Azul, who are experiencing a complicated moment in this final phase of the tournament.
6:38 PMa month ago