We end tonight's broadcast and invite you to follow us next time.
10:21 PM21 days ago

With authority, hierarchy and good play, River was far superior and beat its rival.

Final stretch of the game, not much at stake in the last minutes, both teams let time pass and the game ends.
10:16 PM21 days ago

Milton Casco's shot inside the area was saved by the goalkeeper.
10:12 PM21 days ago

Mainero's shot from a set piece in the left zone went over the goal.
10:11 PM21 days ago

River has already lowered the intensity and is playing a lot in the midfield.
10:07 PM21 days ago

The game is played in Sarmiento's field, River wants to increase the score, Sarmiento simply holds on.
10:02 PM21 days ago

In Sarmiento, Torres comes out and Chico comes in.
10:02 PM21 days ago

The changes gave River a new air and increased the intensity.
10:00 PM21 days ago

A shot in the area was saved by the goalkeeper and Simón shot from behind into an empty net.
9:59 PM21 days ago

River lowers the intensity, Sarmiento is a bit lively and has a free kick from the left flank.
9:56 PM21 days ago

Julian Álvarez, who received a pass on the right flank and shot with his right foot to score the sixth goal.
9:53 PM21 days ago

More changes in the pipeline at River Plate
9:51 PM21 days ago

River does not lower the intensity, wants to increase the score and looks very comfortable on the field.
9:50 PM21 days ago

De La Cruz pressured the ball, won the ball and faced the ball, reached the goal, left the pass behind for Barco, who shot with his right foot to score the fifth goal.
9:49 PM21 days ago

Free kick for Sarmiento from the left flank with a lot of danger.
9:46 PM21 days ago

The first changes of the match are being prepared.
9:43 PM21 days ago

Fernandez received a filtered pass and shot with his right foot to beat Sarmineto's goalkeeper once again.
9:42 PM21 days ago

The visitors are still on top, and Sarmiento still can't reach the opponent's area.
9:40 PM21 days ago

The ball is moving at the Eva Perón and the last 45 minutes of the match are being played.
9:21 PM21 days ago

At the end of the first half, River was far superior and the scoreboard reflects it.
9:19 PM21 days ago

One more minute will be played in this first half.
9:19 PM21 days ago

Casco broke down the left flank, crossed to the far post and Álvarez arrived there to push it in with his right foot.
9:18 PM21 days ago

At times, the ball is very much disputed in midfield, and there is no clear dominator of possession in the midfield.
9:13 PM21 days ago

Sarmiento loses its defensive order, River looks for it on the right flank.
9:11 PM21 days ago

The visitors dominated and continued to look for more goals.
9:10 PM21 days ago

Julian Álvarez recovered the ball, faced the ball and entered the area to shoot and beat the goalkeeper for the second time.
9:09 PM21 days ago

Shot from the edge of the box by Pochettino and the ball went straight and hard into the top left corner of the goal.
9:07 PM21 days ago

Barco's shot from the right flank, the ball went through the front of the goal and no one managed to deflect it into the goal.
9:03 PM21 days ago

Álvarez shot inside the area, but the ball went wide.
9:01 PM21 days ago

Enzo Fernández's shot again, after a mistake in the home team's exit, which River was unable to take advantage of.
9:00 PM21 days ago

Fernández's shot inside the area, but the goalkeeper was well positioned and made a save.
8:59 PM21 days ago

The intensity of the match dropped, River moved away from the rival goal in the last minutes.
8:57 PM21 days ago

River comes close, but is very inaccurate in delivering value in the final quarter.
8:55 PM21 days ago

Sarmiento withdraws a bit and waits for its rival to counter after recovery.
8:52 PM21 days ago

Díaz's shot, but the goalkeeper was well stopped and deflected it to the corner.
8:51 PM21 days ago

The right flank is the sector where the visiting team looks for the most, but lacks depth.
8:51 PM21 days ago

Much more possession for River, who are unable to break through their opponents' defensive line.
8:49 PM21 days ago

Little happens in the match, everything is played on the edges of the area, but there is no offensive production that represents real danger.
8:48 PM21 days ago

Free kick for the home team for a foul in three-quarters of the field, with the possibility of sending the ball into the box through the air.

River's first offensive incursion with a ground ball ended in a foul by Sarmiento and a player was cautioned.
8:36 PM21 days ago

These first minutes were played close to River's area, but there was never any real danger of a goal.
8:34 PM21 days ago

In the first few minutes, there was a great deal of ball competition in the middle of the field, but with little attacking intent from the home team.
8:33 PM21 days ago

The ball moves at the Eva Perón stadium and the match between Sarmiento and River Plate gets underway.
8:29 PM21 days ago

The captains' draw has been made, everything is ready and the only thing missing is the referee's order to start tonight's match.
8:28 PM21 days ago

Teams on the court and protocol events

The referee gives the order and the two teams go out onto the field together.
They take the regulation photo and after that the captains are drawn.
8:27 PM21 days ago

Teams in the mixed zone, the players greet each other, they are friends and colleagues, only the order of the central referee is missing, so that they go out to the field and the match begins.
8:25 PM21 days ago

Everything is ready for the teams to take the field, it is expected that at any moment they will be in the mixed zone and together with the referee team, they will take the field to start tonight's match.
The stadium has a good atmosphere and the only thing missing is for the protagonists to move the ball.
8:24 PM21 days ago 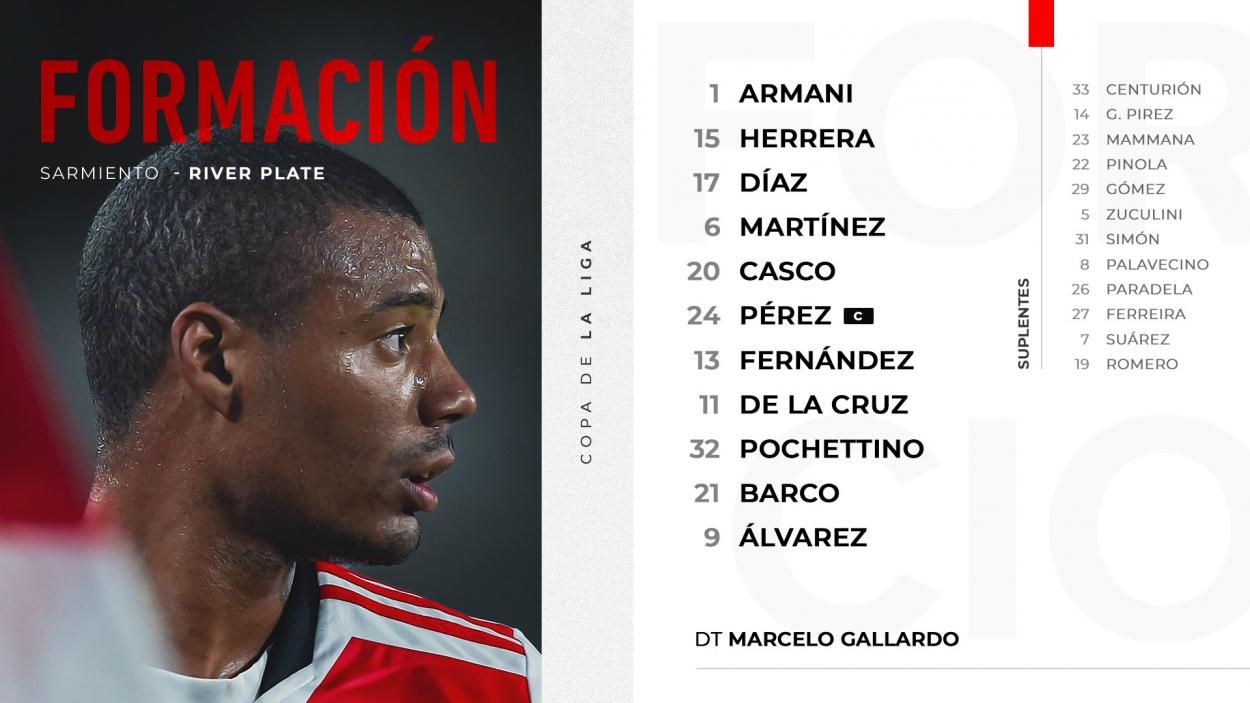 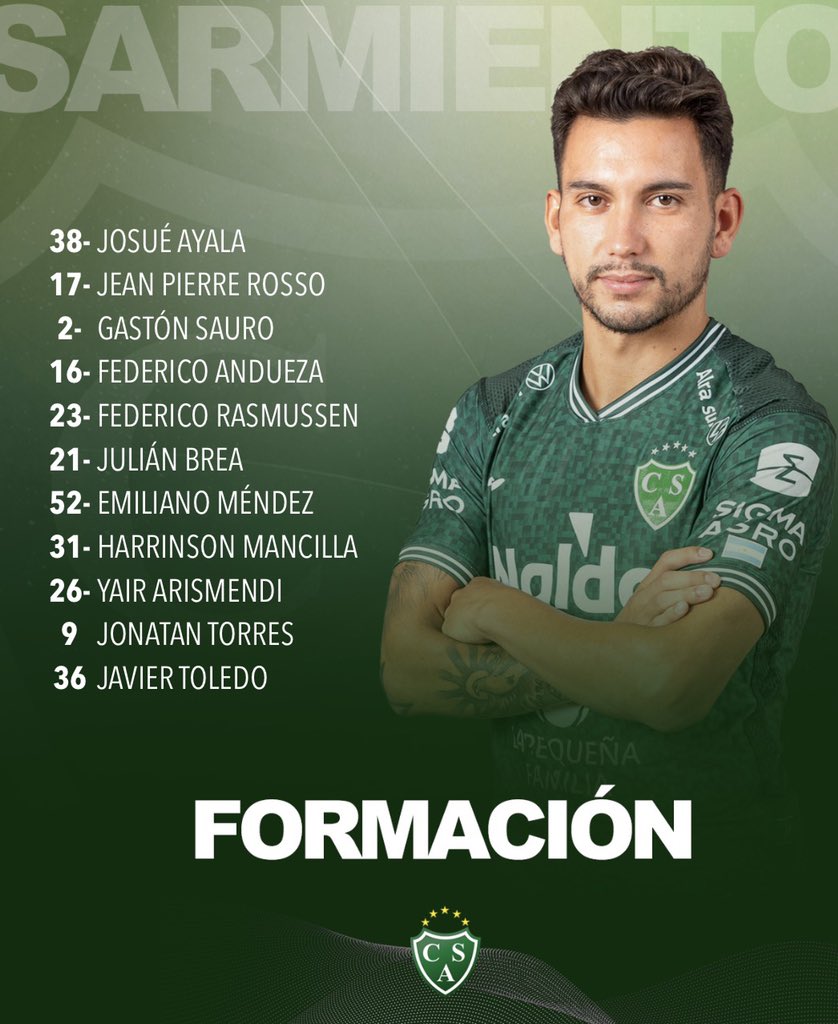 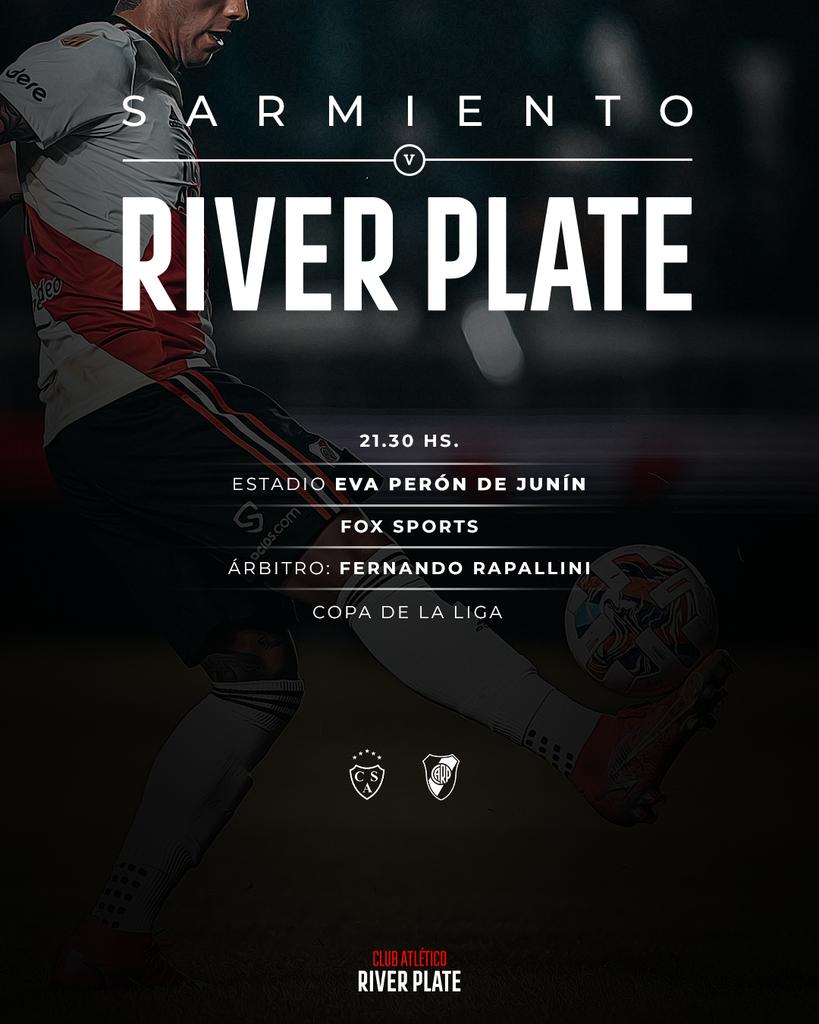 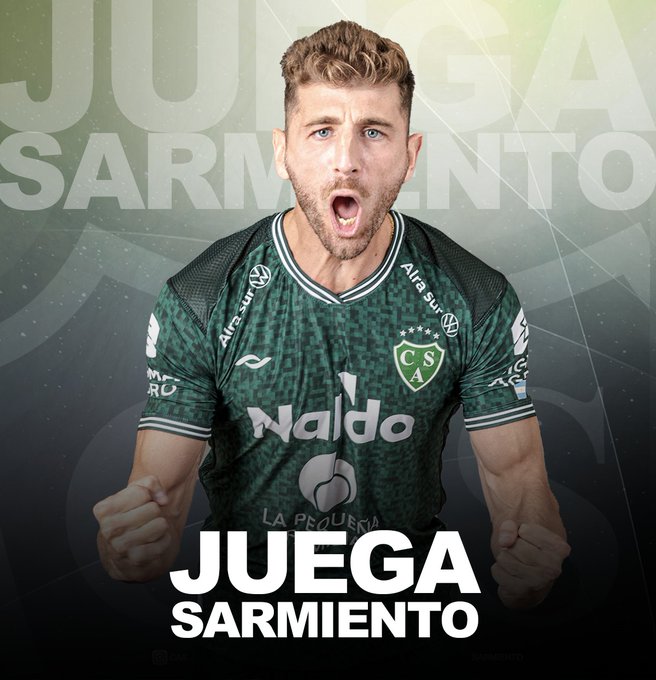 The teams are already living with intensity this game valid for the 13th date of the 2022 Professional League Cup. The teams are using social networks to live a preview with their fans and have a good relationship with their supporters.
7:56 PM21 days ago

In a few moments we will share with you the starting lineups for the Sarmiento vs River Plate live match, as well as the latest information from the Estadio Eva Peron. Stay tuned for up-to-the-minute live coverage of the match on VAVEL.
7:51 PM21 days ago

How to watch Sarmiento vs River Plate live?

What time is Sarmiento vs River Plate?

River's standout is striker Julián Álvarez, a key player in River's offensive play with a total of 4 goals in this tournament and 1 assist.

His average rating is 7.3

The outstanding player is Jonathan Torres, who has already scored 5 goals in this tournament and one assist, his rating per game is 7.1.
7:31 PM21 days ago

History shows that the two teams have faced each other on 4 occasions, with a very positive balance for the crossed band.

Of the 4 matches, 2 ended in a draw and 2 in a victory for River Plate.

The match will be played at the Eva Perón stadium.

The Eva Perón Stadium belongs to Club Atlético Sarmiento in the city of Junín, province of Buenos Aires, Argentina. It was inaugurated in 1951 and has a capacity of 22,000 spectators, with boxes, covered stalls, uncovered stalls and grandstands for locals and visitors.
7:11 PM21 days ago

The Rio de Janeiro team is currently ranked 2nd in Group A, has 23 points from 12 matches and a +11 differential. A win would secure a place in the quarterfinals of the Cup.

Today's away team won 3 of their last 5 matches.

Sarmiento wants to get into qualifying positions

Club Sarmiento Junín is currently sixth in the table, with 21 points after 12 games and with the same points as the last place in the quarterfinals.

The home team won 3 of their last 5 games.