Ángel Correa shoots inside the area and crashes the ball into the left post of the goal.
5:28 PM21 days ago

The referee signals the infraction and Alex Berenguer sees a yellow card.
5:28 PM21 days ago

Ángel Correa has a good chance when receiving a cross from the wing, but he makes an imprecise shot that goes well over the crossbar.
5:25 PM21 days ago

Yellow card for an entry by Renan Lodi. Antonio Mateu Lahoz has not hesitated to admonish the player.
5:25 PM21 days ago

BILBAO GOAL Williams defines in a good way in front of the goalkeeper
5:25 PM21 days ago

Antoine Griezmann takes a free kick just outside the area and tries to score with a magnificent shot that ends up bouncing off the crossbar.
5:24 PM21 days ago

Geoffrey Kondogbia breaks free inside the area and shoots on goal, but his shot is brilliantly blocked by a defender.
5:24 PM21 days ago

Both teams seek to cause fouls more than possession of the ball
5:23 PM21 days ago

Dani García is shown a yellow card for his illegal action.
5:07 PM21 days ago

Mario Hermoso is sanctioned with a yellow card for his illegal action.
4:28 PM21 days ago

Everything is ready for the match between Bilbao and Atletico de Madrid at the San Mamés stadium
2:41 PM21 days ago

This is the XI starter of Bilbao.

This is the XI starter of Atletico de Madrid.

Who is the referee

Antonio Mateu Lahoz is the appointed referee for this match
2:34 PM21 days ago

Bilbao has 2 absences for today.

Atletico de Madrid has 3 casualties for this game

Today's activity concludes with Matchday 34 with this match of vital importance for both, as Bilbao seeks a place in European competitions while Madrid will seek a place in the Champions League
2:06 PM21 days ago

Atlético de Madrid has gone to the break 0-0 in six of its last 7 games so it could continue that trend today as Bilbao also has several 0-0s at break
2:04 PM21 days ago

Atlético de Madrid come out as the wide favorite for today's game with odds of -200 according to bookmakers
1:55 AM22 days ago

Do not miss a detail of the LaLiga 2022 match Athletic Club vs Atlético de Madrid  live updates and commentaries of VAVEL.
1:50 AM22 days ago

If you want to watch the game Athletic Club  vs Atlético de Madrid Live on TV, your options is SKY

For his part, Angel Correa (G11, A5) recorded the best numbers, who has scored two goals in his career against Athletic, both in second halves.
1:35 AM22 days ago

Iñaki Williams, who according to some media has been tempted along with his brother Nico by the Ghana Federation to play for their national team, has directly participated in 11 of the 39 goals scored by Athletic in the current championship (G7, A4).
1:30 AM22 days ago

Qualifying for the Champions League for the tenth consecutive season is the objective of Atlético de Madrid, who have brought back Héctor Herrera and José María Giménez for this match, whose absence has been very noticeable in the red and white ranks. Diego Simeone's squad is being very irregular, and after beating Espanyol in extremis at the Metropolitano (2-1), they did not go beyond a draw in their feud against Granada (0-0).
Atleti can still finish second in a campaign in which 69% of their LL away games have seen goals scored by both teams, and in which the red-and-white defense registers an average of 1.5 goals conceded per away game in The league.
1:25 AM22 days ago

Athletic Club kept their hopes of qualifying for European competitions alive thanks to their 3-2 away win over Cádiz, achieved despite ending up with ten players due to Mikel Vesga being sent off. The lions are eighth, four points behind Villarreal and will need a perfect end to the season to achieve their goal. In three of the last four LaLiga Santander campaigns, Athletic have lost at least three of their final five matches.
In order to finish between 1st and 7th position for the first time since 2016-17, Athletic will have to make San Mamés a stronghold in their remaining matches. The red-and-white team, who had gone five league games undefeated at home ,fell 2-0 to Celta de Vigo in their last home game. Against their rival this Saturday, Athletic links three duels at home scoring, and four of the seven goals registered in them came after min 70.
1:20 AM22 days ago

The game will played at the Estadio de San Mamés

Inaugurated on 16 September 2013, the stadium replaced the "old" San Mamés as the home of Athletic Bilbao. With a capacity of 53,331 seats, San Mamés is the 7th-largest stadium in Spain and the largest in the Basque Country. 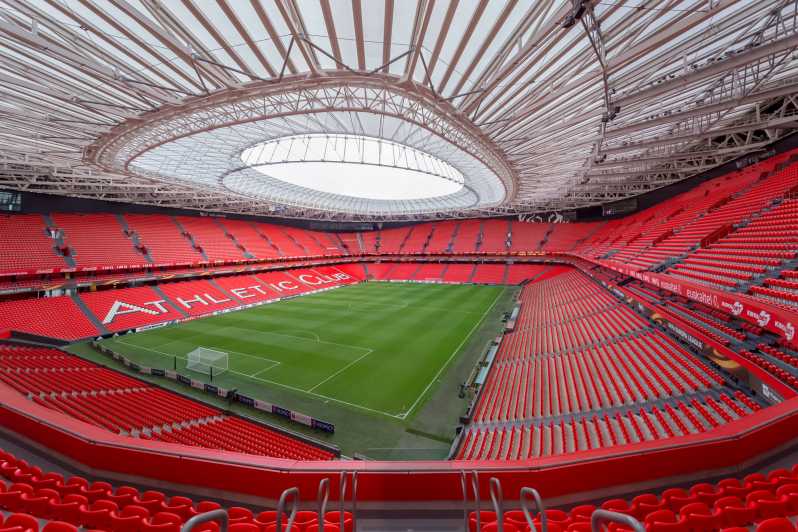