HER2
END4 hours ago

Thank you for listening to this latest LaLiga match here on VAVEL. Have a good night and see you next time!

Getafe return to the field on Sunday (8), when they face Rayo Vallecano. Betis plays on Saturday (7), when it receives Barcelona.

Without goals and in an even sleepy match, with one half for each team, Getafe and Betis draw 0-0 for La Liga!

Unal managed to get a shot off already inside the box, but sent the ball to the left side of the goal, without danger.
4:47 PM21 days ago

Substitution in Getafe: out went Maksimovic and in came Florentino (I swear there are only substitutions. It's difficult)
4:40 PM21 days ago

Substitution in Betis: Fekir is out and Joaquín is in. (yes, only substitutions happen at the moment, NO shots were taken in the last minutes).
4:33 PM21 days ago

Substitution in Betis: Borja Iglesias is out and Willian José is in.
4:31 PM21 days ago

Double substitution in Betis: Ruibal and Tello left to enter Juanmi and Lainez.
4:09 PM21 days ago

Yellow for Ruibal for a foul in the midfield, stopping a counter-attack.
4:07 PM21 days ago

Borja Mayoral headed the ball into the box, and Bravo kept his head out!
4:04 PM21 days ago

Borja Mayoral makes the first touch on the ball and it's off to the second half of the match!
4:03 PM21 days ago

The teams appear on the field to start the second half of the match!

Goalless and in an intense game, Getafe and Betis draw in the first leg that closes the LaLiga round!
3:44 PM21 days ago

Fekir took a long shot and hit it very hard, but Soria sprawled over the goal!
3:38 PM21 days ago

From another free-kick on the edge of the box now Fekir decided to hit it straight at goal, but it went into the net over the crossbar.
3:30 PM21 days ago

On the edge of the area Djene fouled Canales, which earned Djene a yellow card. The foul was hit and taken away by the defense.
3:12 PM21 days ago

Ruibal hit it from outside the area and sent it into Soria's hands.
3:03 PM21 days ago

The first dangerous play of the match was already by Betis, when Canales raised in the area and Pezzela deflected to the defense of Soria, who sent it over the goal!
3:01 PM21 days ago

Borja Iglesias makes the first touch on the ball and it rolls into the first half of the match!
2:58 PM21 days ago

The players take to the pitch to start the match. And now the famous pasillo rolls on, where the Getafe players make a run to applaud the Betis players, who won the Copa del Rey!

Then on Saturday Valencia drew 1-1 with Levante and on Sunday the other games also ended 1-1, which were Elche-Osasuna, Granda-Celta and Rayo Vallecano-Real Sociedad. The exception was Barcelona, who beat Mallorca 2-1.
2:42 PM21 days ago

The round began on Friday (29), with Sevilla's 1-1 draw with Cadiz. On Saturday the first match was between Alavés and Villarreal, which ended 2-1 to Alavés. Also on Saturday Bilbao beat Atlético de Madrid 2-0 and Real Madrid beat Espanyol 4-0 to win the La Liga title!

The players take to the field to start the warm-up work for the match.
2:17 PM21 days ago

Betis is lined up and will take the field with: 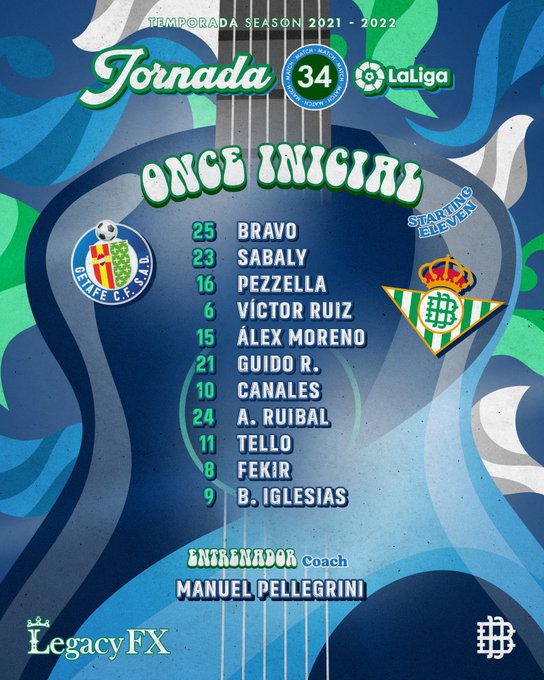 Getafe is lined up and will take the field with: 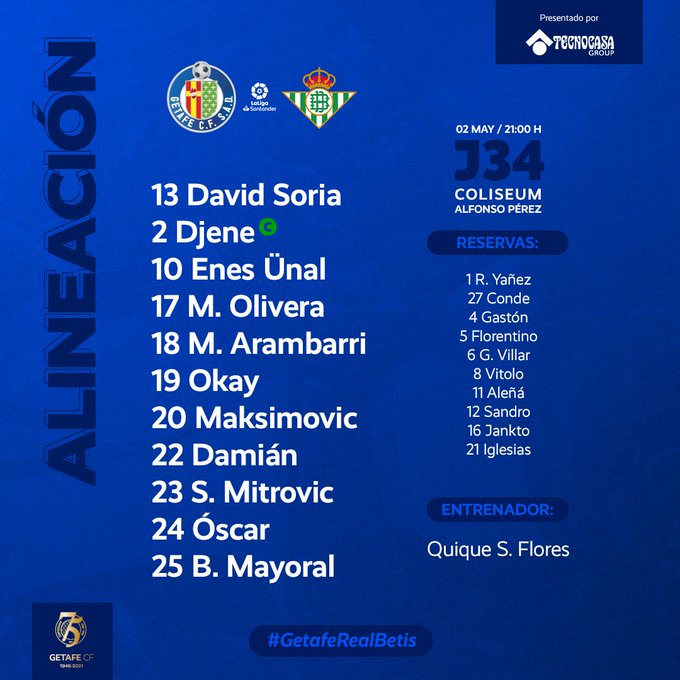 Now the broadcast of the LaLiga match between Getafe and Betis begins!

Do not miss a detail of the match with the live updates and commentaries of VAVEL. Follow along with us all the details, commentaries, analysis and lineups for this Getafe vs Betis match.
1:57 PM21 days ago

How to watch Getafe vs Betis Live in TV and Stream

If you want to watch the game Getafe vs Betis live on TV, your options is: none.

What time is Getafe vs Real Betis match for LaLiga?

This is the start time of the game Getafe vs Betis of 2nd May 2022 in several countries: 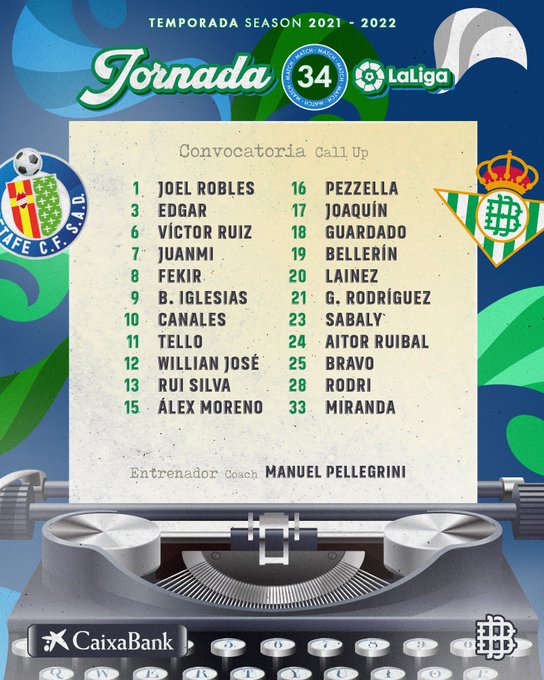 The probable Getafe team for the match is: Soria, Dakonam, Mitrovic and Villar; Suarez, Rodríguez, Arambarri, Luis and Oliveira; Unal and Borja Mayoral.
1:32 PM21 days ago

Getafe will not be able to use Jorge Cuenca, who is suspended, as well as Maksimovic, who is ill, and Jaime Mata, who is injured. Meanwhile Betis will be without Camarasa and Montoya, both injured, and Akoukou, suspended.
1:27 PM21 days ago

Betis are in fifth place with 57 points, four behind Atlético de Madrid and just one ahead of Real Sociedad, while Getafe have 35 points, four behind Espanyol and three ahead of Mallorca, and are in 15th place, but only four points behind Granada, the first team in the relegation zone.
1:22 PM21 days ago

Meanwhile Betis comes from a loss and a draw, but still a title won. On Tuesday (19) came the defeat, at home, to Elche, by 1-0, with a goal by Morente. The tie was in the final of the Copa del Rey, on Saturday (23), 1-1, with Valencia, with Borja Iglesias opening the scoring and Hugo Duro equalizing. In the penalty shootout Betis beat Valencia 5-4 and lifted the Cup!

Getafe come into the match on the back of a loss and a win in their last two matches. The defeat came on April 16, against Villarreal, 2-1, with goals from Gerard Moreno and Manu Trigueros, while Unal scored. The victory was 2-0, over Celta, on Wednesday (20), with goals from Borja Mayoral, who scored twice.
1:12 PM21 days ago

Welcome to VAVEL.com’s coverage of the 2021-22 LaLiga match: Getafe vs Betis Live Score!