Macron hands over the cup and Nantes are officially French Cup champions! I'm done here, celebrate Nantes fans and stay tuned here for the repercussions of this match. Have a good night, and see you next time!
4:58 PM10 days ago

22 years later, 22 years of waiting and the cry of champion can be shouted once again by the Nantes fans. Nantes are champions of the 2022 French Cup!

And there were yellows for Lemina and Kolo Mouani for general confusion after a foul, which was hit over the goal by Cyprien.
4:52 PM10 days ago

The referee gives four more minutes of extra time. Nantes are four minutes away from the cup, and Nice have four minutes to play for an equalizer!
4:48 PM10 days ago

Replacement in Nantes: out went Coco and in came Fabio.
4:41 PM10 days ago

Yellow for Dante, for another foul in the midfield.
4:34 PM10 days ago

Double substitution at Nantes: Chirivella and Simon left for Bukari and Cyprien.
4:33 PM10 days ago

Gouiri shot and Lafont saved, giving a rebound to the middle of the area, where Delort shot and Andrei Girotto, on the line, caught with his foot, saving Nantes!
4:24 PM10 days ago

Substitutions at Nice: Dolberg and Rosario left for Brahimi and Lemina.
4:19 PM10 days ago

Simon received Kolo Muani's pass and hit a goal, but he was stopped and the ball went out for a corner, beaten and taken by the defense for Nantes' possession.
4:18 PM10 days ago

Substitution in Nice: Boudaoui is out and Justin Kluivert is in.
4:16 PM10 days ago

For a hard tackle on the opponent in midfield, Boudaoui was shown a yellow card.
4:09 PM10 days ago

Blas flicked his foot into the right corner, with no chance for Bulka, who took the corner but could never get to the ball on top. The score is open!
4:09 PM10 days ago

Merlin tries a cross in the first move, and the ball clips the defender's arm, giving Nantes a penalty!

Simon makes the first touch on the ball and it rolls into the second half of the match!

The players return to the pitch to start the second half of the final!

No goals and few chances, first half of French Cup final ends in a draw!

Yellow card to Todibo, for a strong arrival in the midfield.
3:36 PM10 days ago

Rosario took a chance from outside the area and sent it over the goal.
3:32 PM10 days ago

Gouiri hit it from the half moon and sent it through the left side of the goal, out!
3:31 PM10 days ago

Blas received on the edge of the area, dominated invading the area and Bulka came out very well and saved Nantes!
3:16 PM10 days ago

Blas creates the first chance of the game and hits a low shot from the halfway line, but it hits Bulka's hand.
3:14 PM10 days ago

As expected in a final, the game starts tense, with no chances created. Nice is the one who tries to go up, but has done little so far.
3:03 PM10 days ago

Dolberg makes the first touch on the ball and it's off to the first half of the final!
3:02 PM10 days ago

In the round of 16 Nantes beat Stade Brestois, 2-0, while Nice drew 0-0 with PSG and went through on penalties, winning 6-5.

The players take to the field to begin their warm-up exercises.
2:20 PM10 days ago

Nice is scheduled for the match and will play with: 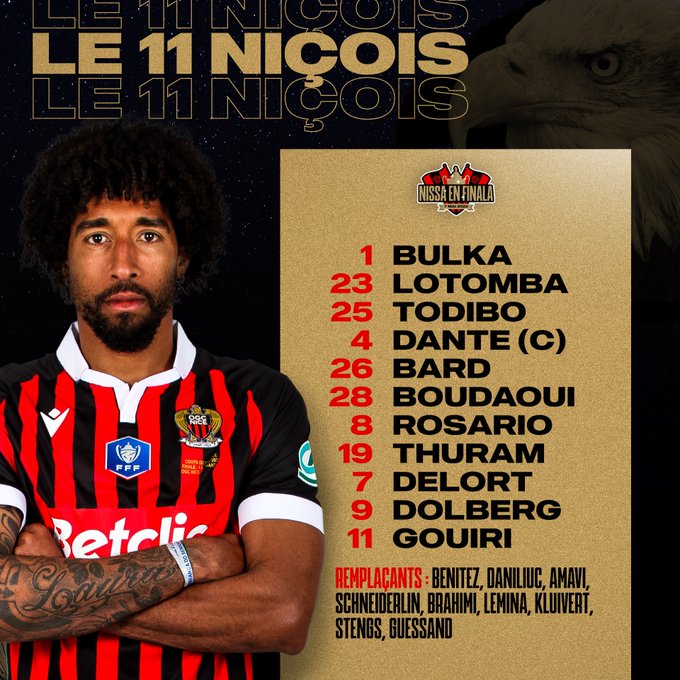 Nantes is scheduled for the match and will play with: 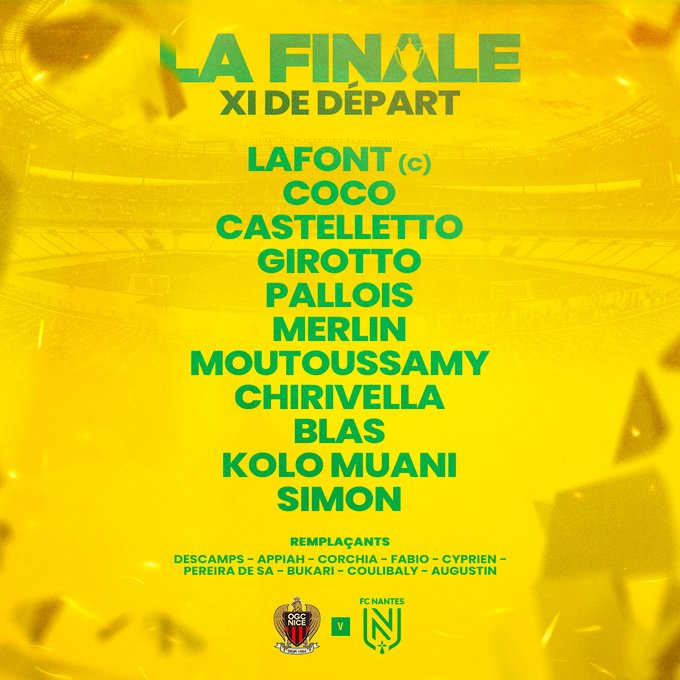 It's finals day, my friend! Now begins the broadcast of the French Cup final match between Nantes and Nice!

Do not miss a detail of the match with the live updates and commentaries of VAVEL. Follow along with us all the details, commentaries, analysis and lineups for this Nice vs Nantes match.
2:00 PM10 days ago

How to watch Nice vs Nantes Live in TV and Stream

If you want to watch the game Nice vs Nantes live on TV, your options is: none.

What time is Nice vs Nantes match for Coupe de France?

This is the start time of the game Nice vs Nantes of 7th May 2022 in several countries:

Stephanie Frappart will referee the match, with assistant referees Mikael Berchebru and Benjamin Pages. Jeremis Pignard will be in charge of VAR.
1:45 PM10 days ago

The probable Nice team for the match is: Benitez, Lotomba, Todibo, Dante and Bard; Bouadaoui, Thuram, Rosario and Kluivert; Gouiri and Delort.
1:35 PM10 days ago

Nice will not be able to use Atal and Calude-Maurice, both injured, while Schneidelin may be out. Nantes will be without Castelletto and Traoré, both injured.
1:30 PM10 days ago

Meanwhile, Nantes has had some intense games. On Sunday (24), the victory was over Bordeaux, 5-3, when Niang opened the scoring and Dilrosun extended the score for Bordeaux. Then Coulibaly decreased and Chaby (against) equalized. Then Kwateng put Bordeaux ahead again. Then Coulibaly, Simon and Bukari scored and turned the match into a rout. On Saturday (30) came the draw away 2-2 with Lens, when Simon opened the scoring and extended the lead for Nantes, who had one more, but Costa and Kalimuendo scored and tied the game.
1:20 PM10 days ago

Nice comes to the match of two wins and, the curious thing about it is: they are two wins by 1-0. Against Troyes, on Sunday (24), with a goal from Thuram-Ulien and against Bordeaux, on the following Sunday (01), with a goal from Derlot.
1:15 PM10 days ago