Thank you here for your audience on yet another LaLiga match. A good night and see you next time!

All games in the 37th round will be on the same day and time, on Sunday (15) at 11:30am. Atlético Madrid host Sevilla and Elche visit Celta.

Yellow card to Koke, for a foul in Atleti's defensive midfield.
5:20 PM7 days ago

Suárez received the ball in front of the goal, tabulated with his teammate and hit it into the net, leaving his own. But at the beginning of the play he was offside and the goal was disallowed.
5:16 PM7 days ago

Suárez was launched in front, dominated and played to the middle, where Correa dominated and hit hard, but stamped the crossbar!
5:10 PM7 days ago

Kike took a chance from outside the area and sent it over the goal.
5:07 PM7 days ago

Substitution in Elche: Mascarell left and Guti came in.
5:00 PM7 days ago

Double substitution at Atleti: De Paul and Griezmann left for Correa and Herrera.
4:57 PM7 days ago

Substitution in Elche: Pere Milla left and Pastore came in.
4:51 PM7 days ago

De Paul received through the middle and gave back to Griezmann in the area, who came face to face with Badia and played to the middle, where De Paul was alone to hit the empty goal!
4:45 PM7 days ago

In the first dangerous move Matheus Cunha got the shot off and Bigas deflected it over the line, saving Elche from a second goal!
4:35 PM7 days ago

Matheus Cunha makes the first touch on the ball and it rolls into the second half of the match!
4:34 PM7 days ago

The teams reappear on the field to start the second half.

With a solitary goal from Matheus Cunha, Atleti beat Elche away from home and confirmed their place in next season's Champions League!
4:14 PM7 days ago

De Paul received in front and hit hard, but goalkeeper Badia caught it. The problem is that he was offside and the goal was disallowed.
4:12 PM7 days ago

Yellow card to Bigas, for a foul on Matheus Cunha. Because of this yellow card Bigas is suspended for the next match.
4:06 PM7 days ago

Yellow card to Renan Lodi, for a foul in the midfield.
4:05 PM7 days ago

De Paul received on the left, invaded the area and played in the middle, where Carrasco was, who came knocking and sent it over the goal.
4:00 PM7 days ago

In the cross coming from the left, where Renan Lodi received the line and hit hard to the middle, Matheus Cunha anticipated the marking and arrived deflecting to the bottom of the goal!
3:53 PM7 days ago

Now it was Koke's turn to hit a shot from outside the box, but it went right into Badia's hands.
3:51 PM7 days ago

A corner kick from the right, taken at the edge of the small area, Bigas got his head on it and sent it to the left side of the goal!
3:48 PM7 days ago

Kondogbia took a chance from outside the area and sent it over the goal.
3:43 PM7 days ago

Matheus Cunha got the shot already inside the area, after Renan Lodi managed to stay with Koke's pass, and sent it over the goal!
3:39 PM7 days ago

And already the first yellow card was shown. Pere Milla hit Kondogbia hard in midfield and was yellow-carded for the foul.
3:37 PM7 days ago

Vrsaljko feels an injury and in his place Renan Lodi comes in.
3:31 PM7 days ago

Lucas Boyé makes the first touch on the ball and it rolls into the first half of the match!
3:28 PM7 days ago

The teams appear on the field to start the match!
3:11 PM7 days ago

The players take to the field to begin their warm-up exercises.
2:44 PM7 days ago

Elche is scheduled and comes to the field with: 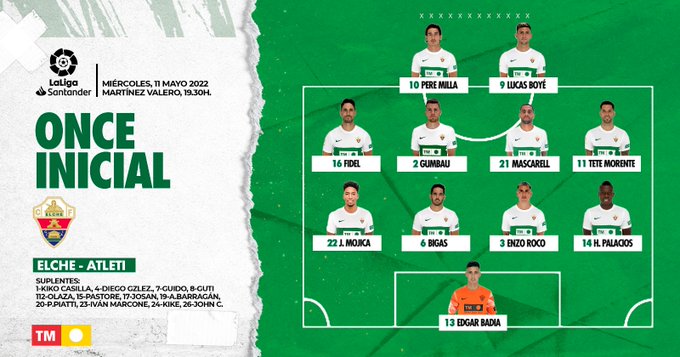 Atletico is scheduled and comes to the field with: 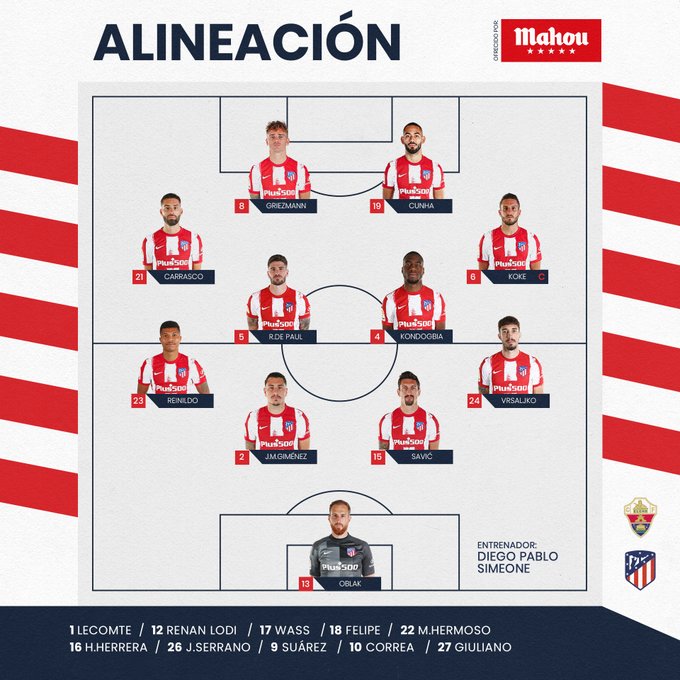 Now begins the broadcast of the LaLiga match between Elche and Atlético de Madrid!

Do not miss a detail of the match with the live updates and commentaries of VAVEL. Follow along with us all the details, commentaries, analysis and lineups for this Elche vs Atleti match.
2:24 PM7 days ago

If you want to watch the game Elche vs Atleti live on TV, your options is: none.

What time is Elche vs Atletico de Madrid match for LaLiga?

This is the start time of the game Elche vs Atletico de Madrid of 11th May 2022 in several countries:

Pablo González Fuertes will be the referee for the match, with assistant referees Ricardo De Burgos Bengoetxea and Iker de Francisco Grijalba.
2:09 PM7 days ago

Elche will not have any absentees, besides Ponce's return, who was suspended in the last game. Atleti won't have Lemar and João Félix, both injured.
1:54 PM7 days ago

Atleti is in fourth place with 64 points, one behind Sevilla and eight behind Barcelona, and sees Real Madrid, already champions, with 81 points. Elche, meanwhile, have 39 points, in 14th position, two points ahead of Getafe and one behind Espanyol.
1:49 PM7 days ago

Meanwhile, Elche comes from a draw and a defeat in the last two games. The draw was on Sunday (01), at home against Osasuna, 1-1, with Budimir opening the scoring and Oere Milla equalizing soon after. The defeat was to Cadiz, on Saturday (7), by 3-0, with goals from Negredo, Sobrino and Lozano.
1:44 PM7 days ago

Atletico de Madrid comes to the match from a defeat and a victory in the last games. The defeat was away from home, on Saturday (30), to Bilbao, by 2-0, who won with goals from Hermoso, who scored against, and Iñaki Williams. On the other hand, the victory was last Sunday (8), over Real Madrid, stamping the archrival's championship belt, winning with a goal by Carrasco.
1:39 PM7 days ago

Philadelphia Union vs Inter Miami CF preview: How to watch, team news, predicted lineups, kickoff time and ones to watch 6 hours ago

New York Red Bulls vs Chicago Fire preview: How to watch, team news, predicted lineups, kickoff time and ones to watch 6 hours ago

D.C. United vs NYCFC preview: How to watch, team news, predicted lineups, kickoff time and ones to watch 10 hours ago