We end tonight's broadcast and invite you to follow us next time.
10:28 PM8 days ago

A great victory for the matador, who, with order and tactics, managed to win the key and will play against Argentinos Juniors on Sunday for a place in the final.

Everything is played in Tigre's field.
10:22 PM8 days ago

Fernandez's shot from a free kick, and goalkeeper Marinelli had to keep his hand out to prevent the ball from going into his goal for the equalizer.
10:20 PM8 days ago

Five more minutes will be played in the second half.
10:19 PM8 days ago

River plays with the ball and always divides the ball, without winning rebounds well.
10:18 PM8 days ago

Tigre defends with all their might, they have a lot of order and River cannot find themselves on the pitch.
10:18 PM8 days ago

In: Sosa and Magnin

River's cross from the right, the ball hit a Tigre player, everyone called for a penalty handball, but the referee waited, the VAR was not called and play continued at the Monumental.
10:13 PM8 days ago

Many delivery errors in River, which fails to have clarity in the last quarter of the field.
10:11 PM8 days ago

Tigre takes a breather and plays in the opponent's field with dominated ball.
10:10 PM8 days ago

For the visitors, there are changes

There will be a little more than 10 minutes left for River to make something of the match, while Tigre defends with everything it has.
10:08 PM8 days ago

All Tigre withdrew, they defended with everything, River put another man in the area, forcing Tigre to be more concentrated.
10:07 PM8 days ago

The visitor's team has a change

River plays with desperation, does not find spaces and the minutes go by.
10:05 PM8 days ago

Two changes are presented in the premises

In: Romero and Simón

Out: Pochettino and Barco

Barco's shot inside the area, but the ball hit an opponent and went for a corner kick.
10:00 PM8 days ago

River plays it with desperation, looks for both flanks, but has many delivery errors.
9:58 PM8 days ago

In River's best moment, they made a mistake at the start, the ball was left for Colidio, who faced the ball, saw Armani coming out of the box and scored between his legs.
9:57 PM8 days ago

It was a play on the left flank, which ended with De La Cruz putting in a low cross, but the defense anticipated and sent the ball to the corner.
9:54 PM8 days ago

River plays better, wants to turn the score around and continues to press the midfield, to recover quickly and not have to advance so much territory with the ball under control.
9:52 PM8 days ago

Fernandez received a ball from De La Cruz, looked at the goal, shot straight with his instep and with that he had enough to beat the rival goalkeeper.
9:52 PM8 days ago

River is playing a little better in this second half, reaching the edge of the opponent's area with more ease, but it lacks a little more to be able to create real danger.
9:41 PM8 days ago

Alvarez received the ball on the edge of the area, controlled the ball, turned and shot, but the ball went straight into the goalkeeper's hands.
9:38 PM8 days ago

Fernández's shot from half distance, but the ball went wide of Tigre's goal.
9:38 PM8 days ago

Initial possession for River, who wants to equalize quickly and seeks to do so by circulating the ball horizontally to open up space.
9:36 PM8 days ago

The last 45 minutes of the match at the Monumental stadium, valid for the quarterfinals of the Professional League Cup, are about to begin.
9:20 PM8 days ago

Partial victory for Tigre, which controls its rival defensively and waits for moments of recovery to play with quick transitions.

Tigre defended well and took advantage of what was the clearest play they had.

Herrera's cross from the right, Pochettino won in the air and the ball had no direction to goal.
9:17 PM8 days ago

Two more minutes will be played in this first half.
9:15 PM8 days ago

River's cross from the left was anticipated by the defense, but it was not well deflected and almost ended in an own goal.
9:12 PM8 days ago

Pochettino and Álvarez try to get together, but it is very difficult for them because of the floor.

At times River gets close to the opponent's area, but starts to get desperate, they throw in crosses from both sides, but never win in the air and lose possession of the ball.
9:07 PM8 days ago

7 of River's substitutes warm up, Gallardo starts looking for other options to get past Tigre's defensive line.
9:05 PM8 days ago

Tigre controls the match, because it wins it, defends well and with a lot of order.
9:04 PM8 days ago

It was Colidio's shot from almost midfield, but Armani was well positioned and made a save when the ball was about to go into the goal.
9:02 PM8 days ago

Tigre had it, it was 3 against 1, but they made bad decisions and the defense caught up with them and neutralized the offensive play.
8:59 PM8 days ago

River plays in the opponent's field, but lacks depth, as it only plays well up to three quarters of the field.
8:56 PM8 days ago

Pochettino received alone in front of the goalkeeper, shot across, but the ball went over the side of the goal and the screams of the fans were drowned out.

Tigre retreats, plays with speed after recovering and always catches River off guard, but fails to take advantage of the opportunities.
8:52 PM8 days ago

There is a lot of ball competition in the middle of the field, there is no clear dominator of ball possession.
8:49 PM8 days ago

River does not find space, it is difficult for them to advance beyond three quarters of the field and their rival penetrates them defensively very easily and plays better.
8:46 PM8 days ago

River tries to control possession, Tigre gets a bit behind and the match is interesting and hard-fought.
8:44 PM8 days ago

De La Cruz was cautioned for a foul in the opponent's half.
8:43 PM8 days ago

River had another chance.

The play was on the left, the ball was filtered to Casco, but his control went long and the goalkeeper managed to close the space to save and prevent the equalizer.

Fernández's shot from half distance, the ball went very close to the right post and Tigre was saved from the tie.
8:39 PM8 days ago

A cross from the left by Zabala, the forward Retegui anticipated the center backs, changed the direction of the ball with his head and scored the first goal of the night.
8:37 PM8 days ago

A good start by Tigre, who play in the opponent's field, already had their second shot at goal, which was saved by Armani.

River is unable to get out of its own half with the ball under control.

It didn't take long for Tigre to get close to the opponent's area, with a weak shot from the right, the ball ended up in Armani's hands, after which River tried to respond with a shot from the left flank, but the ball was too long and ended up going over the goal line.
8:32 PM8 days ago

The ball is moving at the Monumental and the quarterfinals of the Professional League Cup between River and Tigre are underway.
8:27 PM8 days ago

The captains' draw has been made, everything is ready and the only thing missing is the referee's order to start tonight's match.
8:26 PM8 days ago

Teams on the field and protocol acts

The referee gives the order and both teams take the field.
Official photos will be taken and after that the captains will be drawn.
8:24 PM8 days ago

Teams in the mixed zone, the players greet each other, they are friends and colleagues, only the order of the central referee is missing, so that they go out to the field and the match begins.
8:16 PM8 days ago

Everything is ready for the teams to take the field, it is expected that at any moment they will be in the mixed zone and together with the refereeing team, they will take the field to start tonight's match.
The stadium has a good atmosphere and the only thing missing is for the players to move the ball.
8:13 PM8 days ago

This is how Tigre presents its headlines 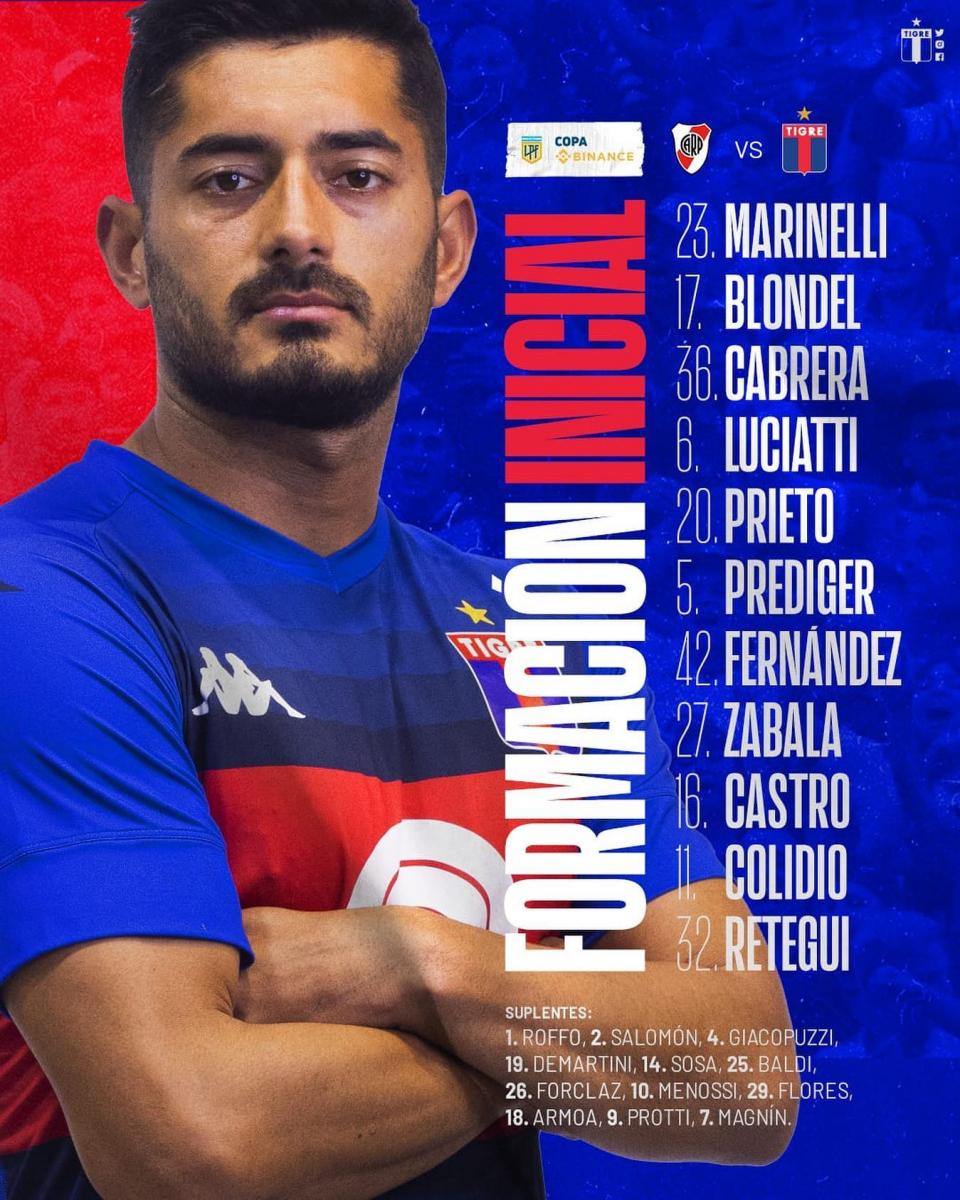 This is how River presents its headlines 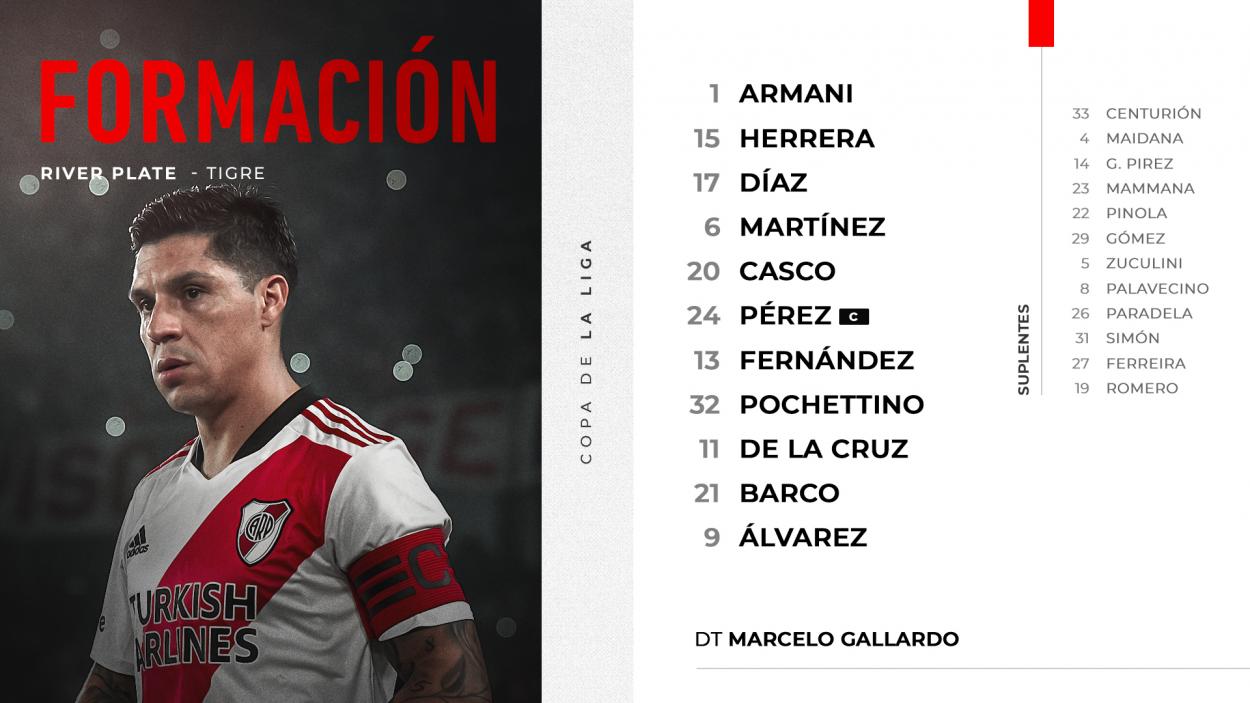 Both teams have already left their respective hotels, where they had their training camp prior to today's match, and are about to arrive at River Plate's stadium.
7:55 PM8 days ago 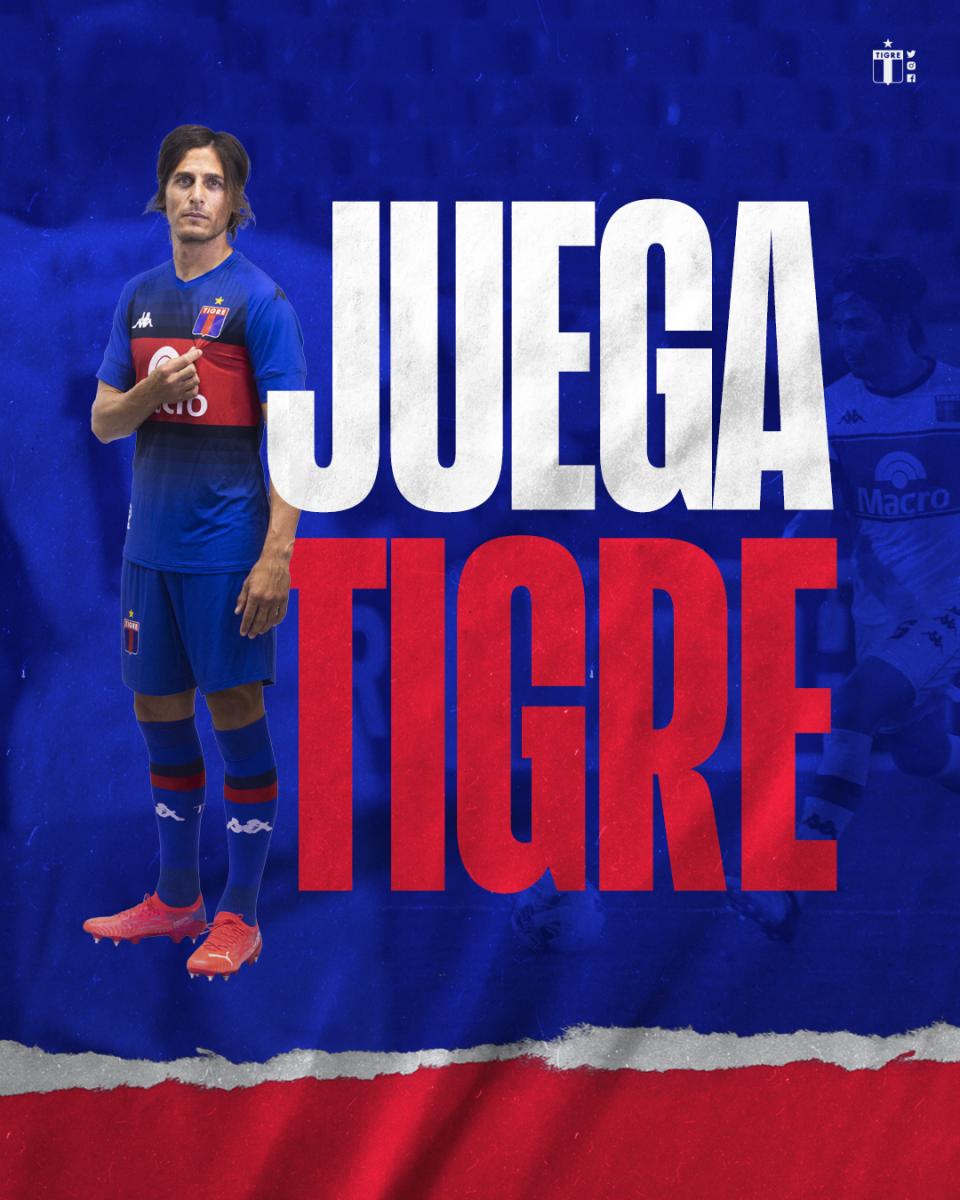 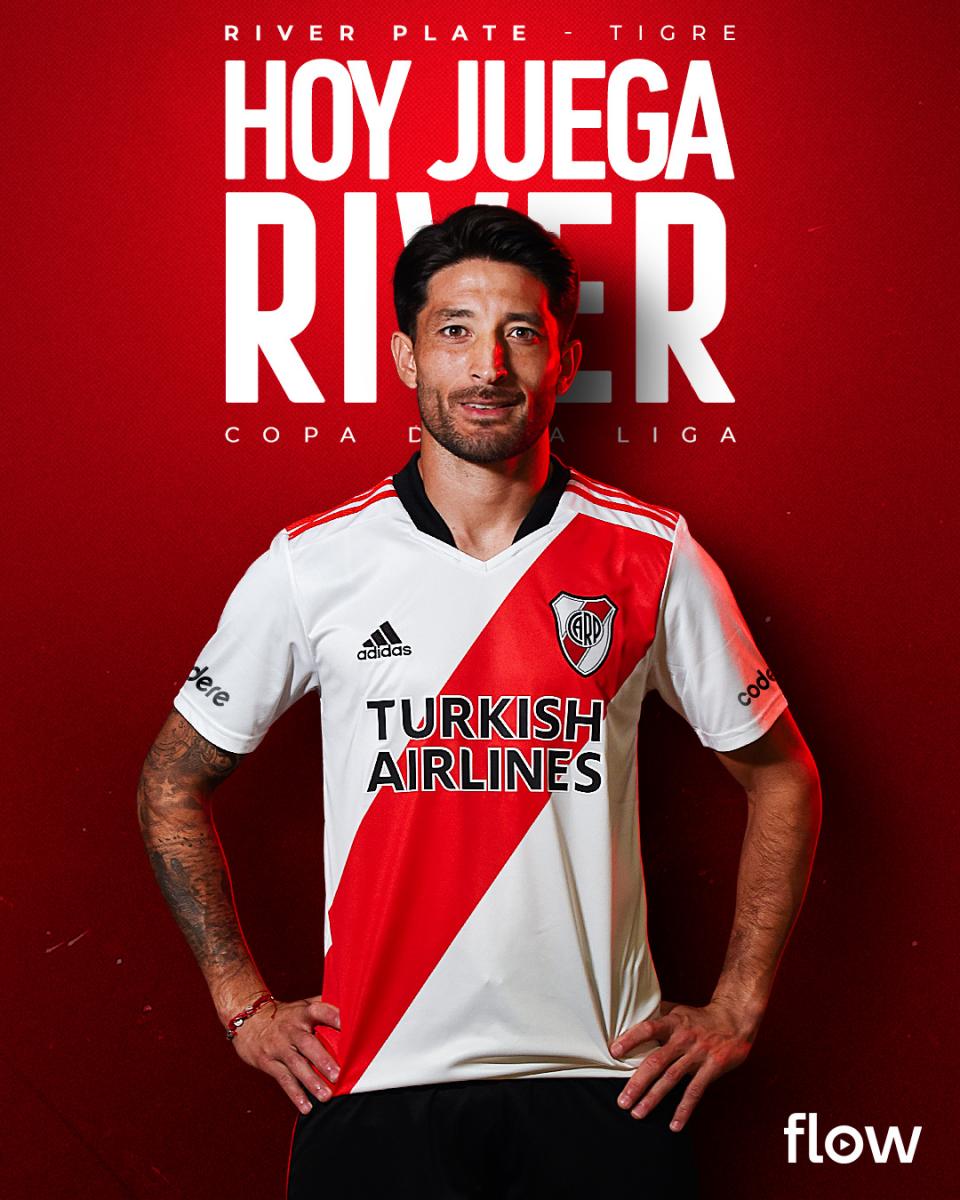 The teams are already living with intensity this game valid for the round of 16 of the 2022 Professional League. The teams are using social networks to live a preview with their fans and have a good relationship with their supporters.
7:48 PM8 days ago 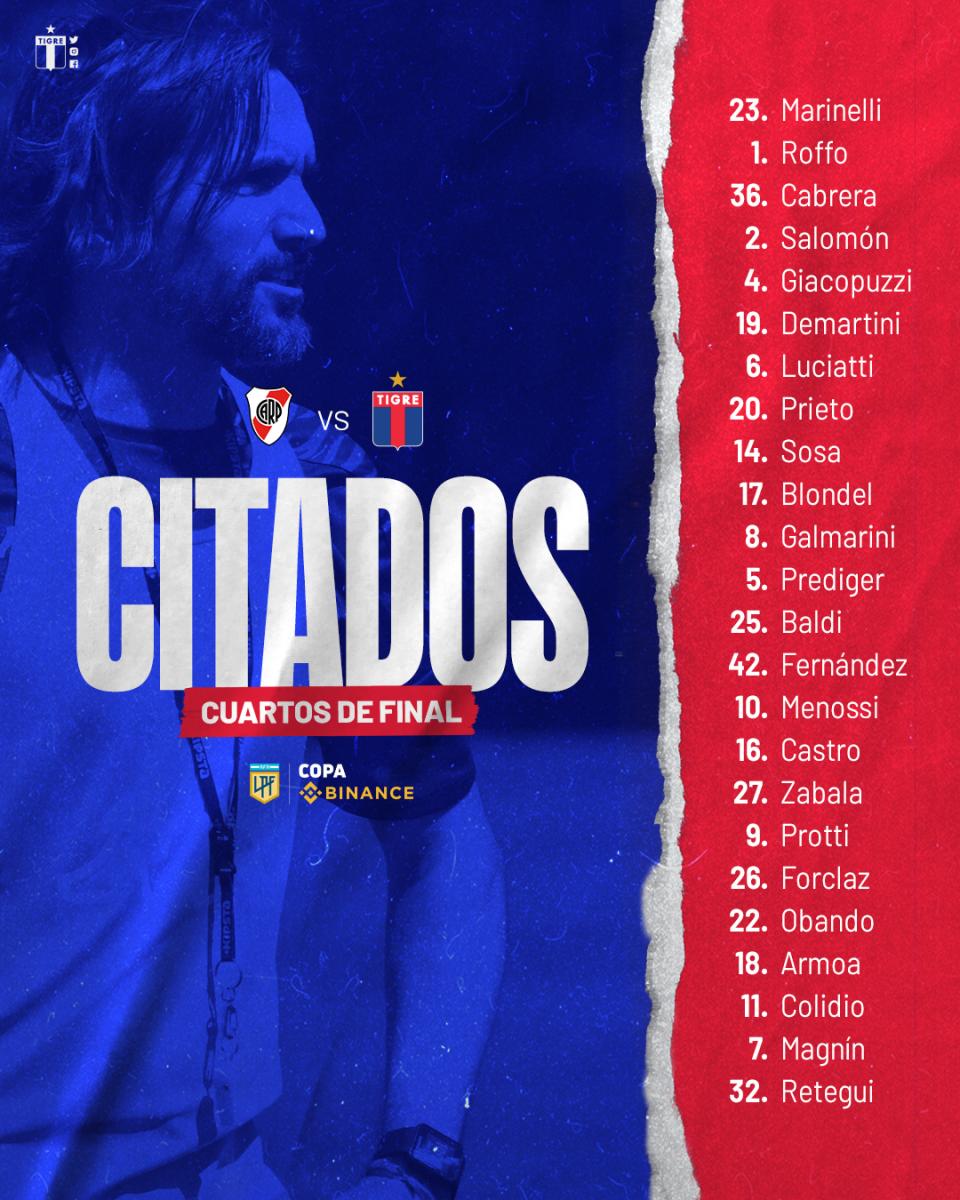 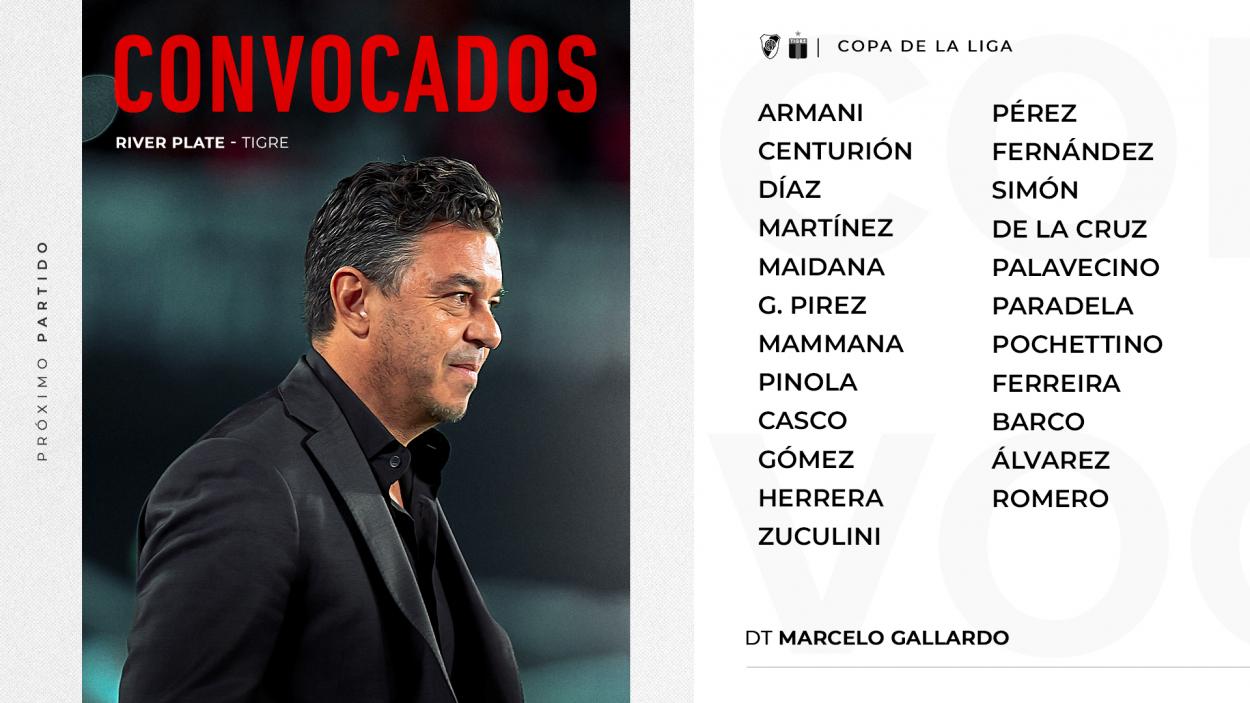 In a few moments we will share with you the starting lineups for the River Plate vs Tigre live match, as well as the latest information from the Estadio Monumental. Stay tuned for up-to-the-minute live coverage of the match on VAVEL.
1:02 AM9 days ago

How to watch River Plate vs Tigre live?

What time is River Plate vs Tigre?

Pablo Magnin is the outstanding player of the matador team and with 5 goals and one assist, he is one of the most outstanding men in Tigre's offensive zone.

The player's average score is 7.0 per game.

River's standout is striker Julián Álvarez, a key player in River's offensive play with a total of 8 goals in this tournament and 2 assists.

His average rating is 7.6

The game will be played at the Monumental

The Antonio Vespucio Liberti stadium or better known as the Monumental de Núñez stadium, is the stadium where River Plate plays its home games, it is located at the intersection of Figueroa Alcorta and Udaondo avenues in the Buenos Aires neighborhood of Belgrano.

The stadium has a capacity of 72,054 spectators.

Tiger for the surprise

Club Tigre wants to surprise in the key. In the regular phase it was ranked 3rd in group B. It obtained 20 points and a difference of +5.

The Tigre team is a good local team, they got 14 points playing at home and their away games did not go well, as they only won 6 points.

The matador box won only 1 of their last 5 games, drew another and lost 3.

River, favorite in the key

River won 3 of their last 5 matches and drew the other two.

Hello everyone! Welcome to the broadcast of the River Plate vs Tigre match corresponding to the quarterfinals of the 2022 Professional League Cup.

My name is Andrés Mesa and I will be your host today. We'll be bringing you pre-match analysis, score updates and live news here on VAVEL.com.