THANK YOU FOR FOLLOWING THE BROADCAST

Thank you for following our coverage of the Colorado vs LAFC MLS regular season match. Continue to visit the VAVEL website to keep up to date with everything that is happening in the world of sports.
5:45 PM2 months ago

The match ends, LAFC falls in Colorado and loses its consecutive winning streak.
5:41 PM2 months ago

Gyasi Zardes (Colorado Rapids) wins a free kick in the defensive half.
5:21 PM2 months ago

Attempt missed. Sebastien Ibeagha (Los Angeles Football Club) header from the centre of the box misses to the left. Assisted by Carlos Vela with a cross following a corner.
5:11 PM2 months ago

Attempt saved. Diego Rubio (Colorado Rapids) right footed shot from outside the box is saved in the top centre of the goal. Assisted by Bryan Acosta.
5:05 PM2 months ago

Attempt missed. José Cifuentes (Los Angeles Football Club) right footed shot from the centre of the box misses to the right. Assisted by Diego Palacios with a cross.
4:32 PM2 months ago

Attempt missed. Jonathan Lewis (Colorado Rapids) left footed shot from the right side of the box is high and wide to the left.
4:23 PM2 months ago

Bryan Acosta (Colorado Rapids) is shown the yellow card for a bad foul.
4:19 PM2 months ago

Penalty conceded by Francisco Ginella (Los Angeles Football Club) after a foul in the penalty area.
4:10 PM2 months ago

Attempt missed. Carlos Vela (Los Angeles Football Club) left footed shot from outside the box is just a bit too high from a direct free kick.
3:59 PM2 months ago

Attempt saved. Danny Wilson (Colorado Rapids) header from the centre of the box is saved in the top centre of the goal. Assisted by Bryan Acosta with a cross
3:55 PM2 months ago

Colorado faces the overall leader of the Western Conference, Vela's LAFC, who are looking to continue their dominance and stay in first place.
3:19 PM2 months ago

In a couple of minutes we will start with the rebroadcast of the Colorado Rapis vs LAFC, a duel corresponding to the regular phase of the MLS.
3:13 PM2 months ago

IMPORTANT TO WIN FOR LAFC

This match will be very important for the Angelina squad as they are three points behind their closest rival, Austin FC, and this will be their next opponent in the calendar, so if they want to remain leaders and not put themselves in danger, they will have to get the three points.
3:11 PM2 months ago

This is the starting 11 that the Los Angeles squad is sending to look for three more points and continue as the true leaders of the MLS Western Conference. 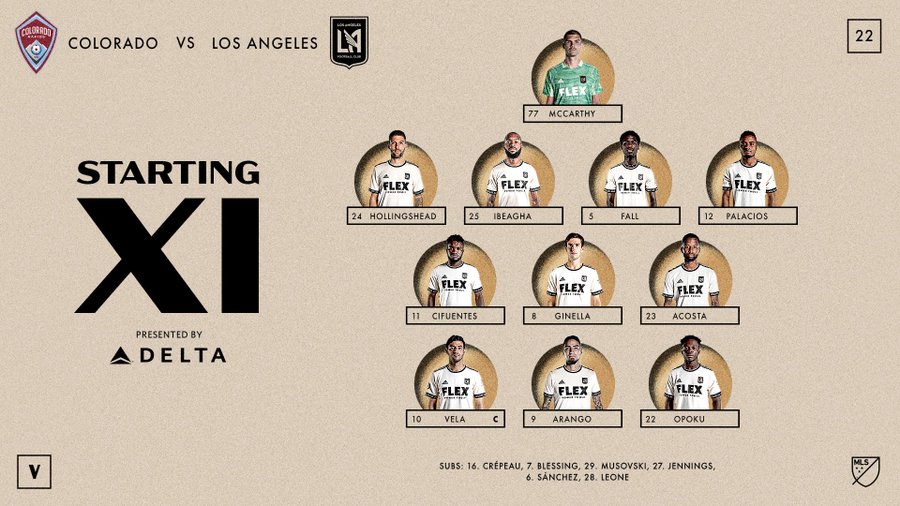 This is the starting eleven that the Colorado Rapids are sending to the field to look for three points at home and with their people. They want the victory! 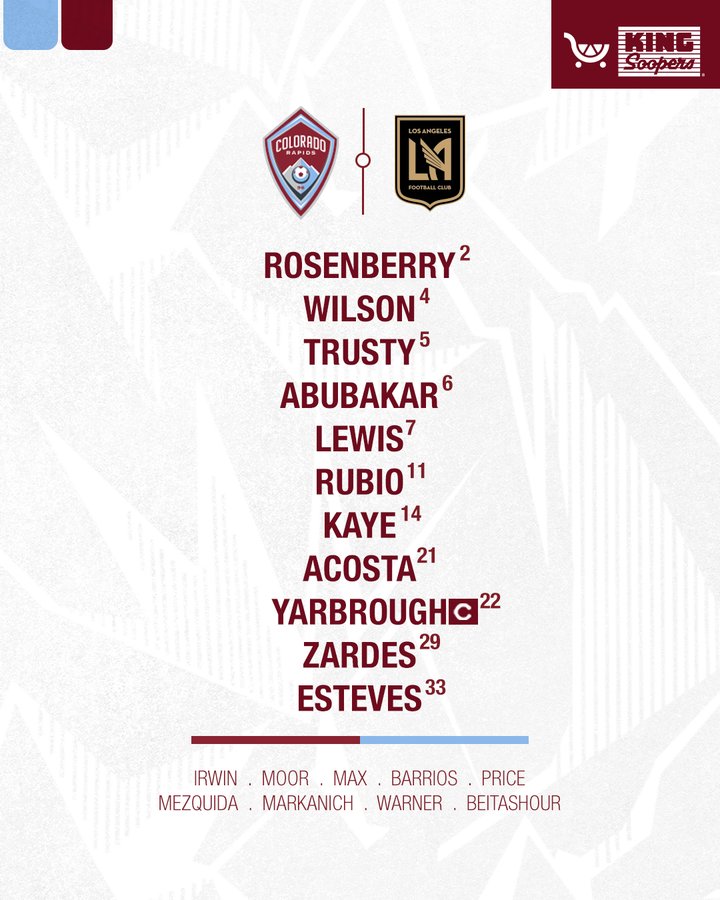 HOW DID THE COLORADO RAPIDS FARE LAST MATCHDAY?

The Colorado Rapids went to visit the San Jose Earthquakes to play another regular season match, in a very tight game with few emotions, the visiting team would fall at the 64th minute with a goal from San Jose to seal their victory and give them another defeat in the campaign.
2:51 PM2 months ago

HOW DID LAFC FARE LAST MATCHDAY?

LAFC faced the Philadelphia Union, leader of the other conference, at the Banc of California Stadium. The duel was very attractive as neither team held anything back and the Angelinos looked for the victory in every possible way, however, the score was tied in an exciting 2-2 but still remaining as leaders of their conference.
2:46 PM2 months ago

HOW IS THE MLS ASSISTS TABLE GOING?

In assists, Diego Fagúndez of Austin FC is in first place with 6 assists, Ján Gregus of Sporting Kansas is in second place with 5 assists, followed by Carles Gil, Derrick Etienne, Talles Magno with 4 assists so far this season.
2:41 PM2 months ago

HOW ARE THE GOALSCORING CHARTS IN THE MLS?

So far, Jesús Ferreira of Dallas, Jesús Jiménez of Toronto and Sebastián Driussi of Austin FC are in first place with 7 goals scored, in second place is Brandon Vásquez with 6 goals scored, in third place are Dániel Gazdag, Diego Rubio, Chicharito Hernández with 5 goals scored.
2:36 PM2 months ago

The wait is over in MLS, Colorado Rapids hosts LAFC for another date of the MLS regular phase. Both teams will be looking for three more points, on the one hand, the locals will be looking to climb positions and get out of the mid-table zone, on the other hand, LAFC wants to continue reigning in the western conference and continue as MLS super leader.
2:31 PM2 months ago

Do not miss a detail of the match with the live updates and commentaries of VAVEL. Follow along with us all the details, commentaries, analysis and lineups for this Colorado vs LAFC match.
2:26 PM2 months ago

What time is Colorado vs LAFC match for MLS?

This is the start time of the game Colorado vs LAFC of 14th May in several countries:

For this match, the experienced and captain of LAFC, the Mexican Carlos Vela will be the player to watch throughout the 90 minutes. So far he has played 131 minutes out of 180, has participated in both matches played by LAFC, has scored 2 goals and has contributed with 3 assists. Therefore, Carlos Vela could at any moment tip the balance in favor of LAFC and give them the victory against Inter Miami. 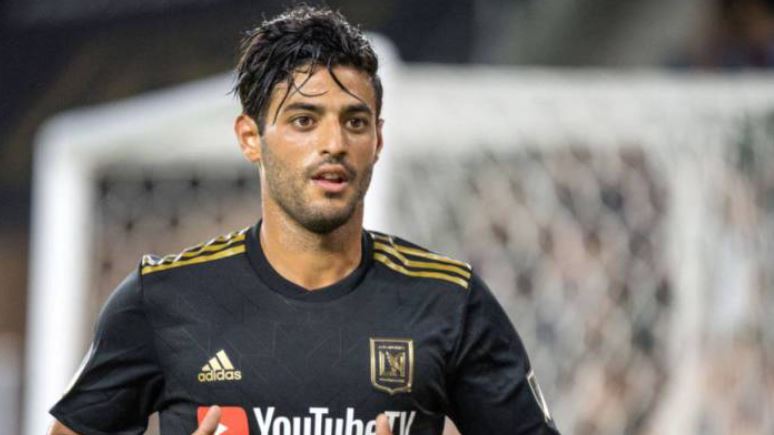 Watch out for this Colorado player:

Gyasi Zardes will be the player to watch throughout the first 90 minutes, stop this match, the American center forward is one of the most known and scorers in MLS history, so he could make the difference in this match and take advantage of any ball left at his mercy to give the three points to Colorado Rapids. 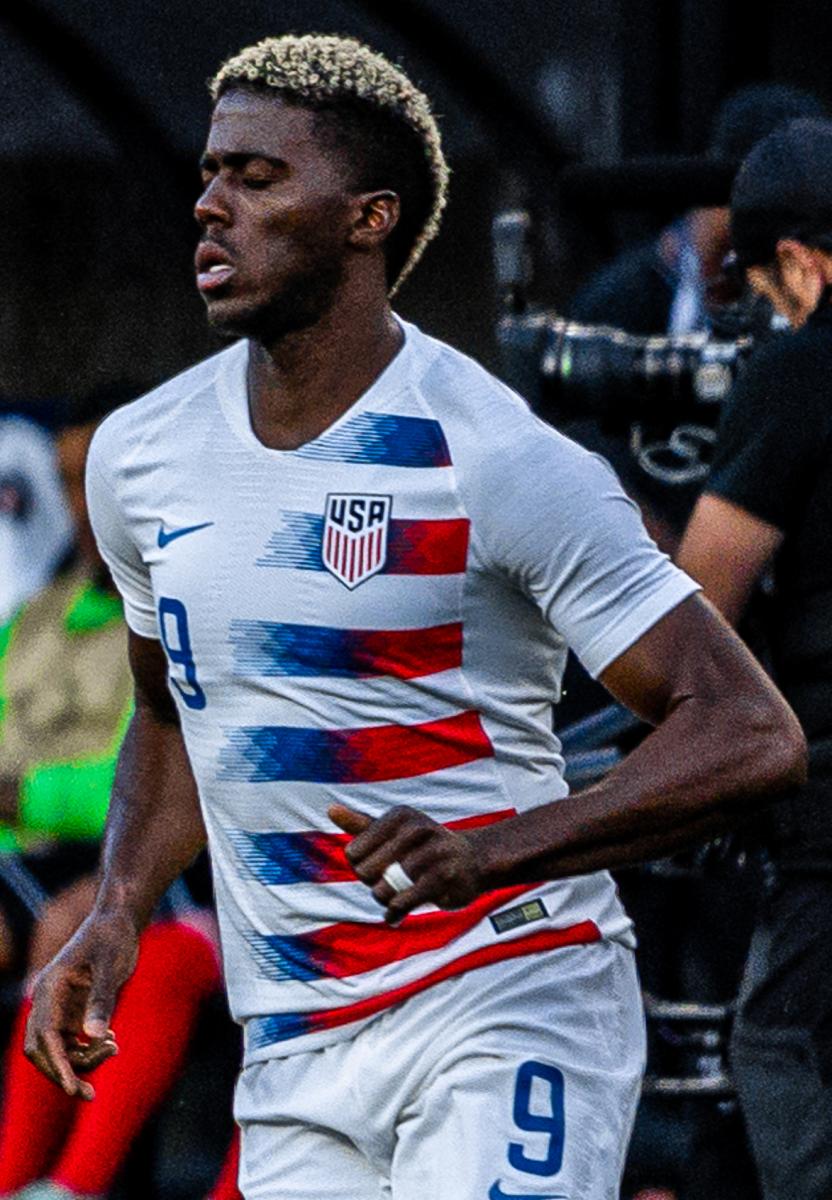 LAFC and Colorado Rapids have only met 7 times in all history (2 wins for Colorado and 5 wins for LAFC) where the scales are tipped in favor of the Angelino box. In goals, it is LAFC who have the advantage with 15 goals to Colorado Rapids' 8. Their last meeting dates back to matchday 1 of the 2022 season where LAFC won by a resounding 3-0.
1:56 PM2 months ago

Dick's Sporting Goods Park is a multi-purpose stadium located in Commerce City, Colorado, United States, in the Denver metropolitan area. It is home to the Colorado Rapids professional team of Major League Soccer. The stadium seats 33,680 people, but can hold up to 30,000 people for certain events.

The stadium opened with a training match open only to Commerce City residents and season ticket holders. The first official game was played against D.C. United on April 7, 2007, and the Rapids won 2-1. Herculez Gomez scored the first goal at the stadium. In the stadium's inaugural year, it hosted the 2007 MLS All-Star Game, in which the MLS All-Stars defeated Celtic FC of Scotland.

The stadium is owned by Commerce City and managed by Kroenke Sports & Entertainment (KSE), which also owns the Colorado Avalanche, Denver Nuggets and Colorado Mammoth, and English Premier League club Arsenal F.C. through a subsidiary. The estimated cost of this project was $131 million, with investment shared equally between the city and KSE.

Looking for a home win

While it is true that Colorado has not had one of the best starts compared to other MLS teams, so far they have presented a regular performance as they occupy the ninth position in the table with 3 wins, 3 draws and 4 defeats at the moment, also, in the statistics they average 11 goals for and 12 against, leaving them in a situation of -1 goal difference. Colorado has been a team that has been making an appearance in the playoffs lately, however, they have not been able to transcend and will be looking for this season to be the start.
1:46 PM2 months ago

To make their stay as visitors count

On the other hand, LAFC is on a good pace in the ten completed rounds of the MLS, as they are currently in first place overall in the MLS Western Conference with 23 points that have been the product of 7 wins, 2 draws and a loss. Likewise, after having a poor season in 2021, LAFC is repositioning itself as one of the teams that are beginning to raise their hand to be considered as a contender for this year's MLS title.
1:41 PM2 months ago

The MLS will have another great regular season match when Colorado receives LAFC in what will be one more match corresponding to the new US soccer season, on the one hand Colorado comes marching in 9th place in the western conference with a regular pace so far, however, LAFC continues in great plan as leader of the conference and only records 1 loss in the 10 games that have been played this season, so a duel full of emotions is expected.
1:36 PM2 months ago

The Colorado vs LAFC match will be play in the Dick's Sporting Goods Park, in Colorado, USA. The kick-off is scheduled at 15:30 pm ET.
1:31 PM2 months ago

Welcome to VAVEL.com’s LIVE coverage of the 2022 MLS: Colorado vs LAFC!

San Jose Earthquakes vs Chicago Fire: How to watch, kick-off time, team news, predicted lineups, and ones to watch 17 hours ago

NYCFC vs Atlanta United preview: How to watch, team news, predicted lineups, kickoff time and ones to watch 18 hours ago

FC Cincinnati 4-4 NYCFC: Orange and Blue, Boys In Blue share the spoils in eight-goal thriller a day ago
//