Thanks for following this match on VAVEL USA. Until the next time!
4:39 PM6 days ago

The referee adds five minutes to the match.
4:32 PM6 days ago

Cagliari: Dalbert is out, Pereiro is in.

Lautaro tries again after an assist from Calhanoglu, but the ball goes wide of the goal.
4:22 PM6 days ago

Cagliari: Altare and Marin are out; Basselli and Carboni are in.
4:21 PM6 days ago

PERISIC! A header that goes just wide of Cragno's goal.
4:14 PM7 days ago

Inter: Bastoni and Dzeko are out; D'Ambrosio and Correa are in.
4:07 PM7 days ago

Half an hour to go. The locals are not giving up and are looking for an equalizer.
4:02 PM7 days ago

Cagliari: Rog and Pavoletti are out; Nandez and Keita are in.

Inter: Barbella and Darmian are out; Dumfries and Gagliardini are in.

The referee adds two minutes to the first half.
3:30 PM7 days ago

POST! Lautaro turns inside the box and fires a shot that hits the post.
3:28 PM7 days ago

Excellent ball from Darmian to Lautaro who looks for the second goal, but ends up getting a corner for the visitors.
3:22 PM7 days ago

Lautaro enters inside the box to take a cross shot that the Cagliari defense deflects correctly.
3:15 PM7 days ago

LAUTARO! A corner kick ends with a header from the Argentine player. The ball goes just past the right post.
3:05 PM7 days ago

Marin's right-footed shot from outside the area passes close to Handanovic's left post.
3:00 PM7 days ago

First fifteen minutes of the match. The visitors with more possession of the ball, but they are not able to score a goal.
2:58 PM7 days ago

No goal! The VAR disallows Inter's goal for a handball.
2:57 PM7 days ago

The VAR is checking the validity of the goal scored by Inter.
2:54 PM7 days ago

Handanovic avoids a goal-bound shot that was heading straight for the bottom corner.
2:52 PM7 days ago

Volley from Calhanoglu who is encouraged to shoot from outside the box.
2:48 PM7 days ago 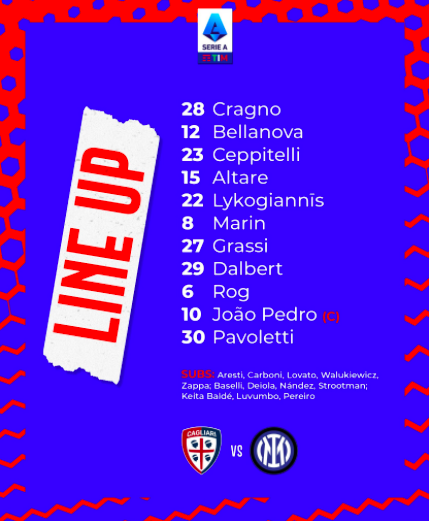 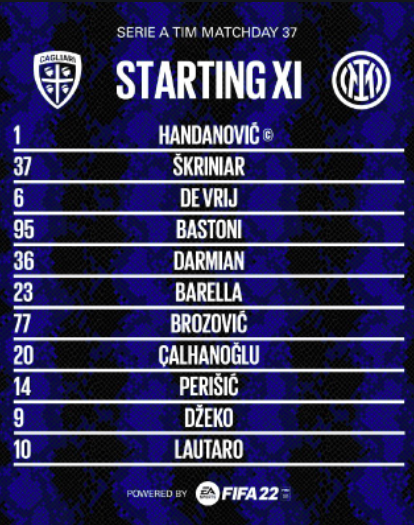 Both teams are already on the Arena Sardinia Stadium pitch for the match that is just minutes away from kick-off. 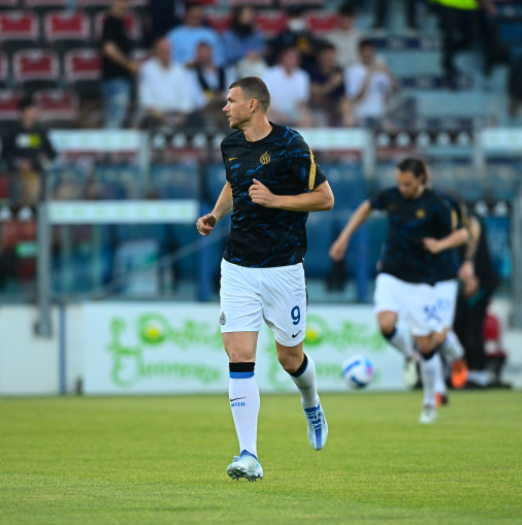 What does Cagliari need to save itself from relegation?

On the other hand, the locals do depend on themselves to save themselves from relegation, however, the task is complicated as they need to win their last two games (Inter and Venezia). In case of losing today, they would play for salvation against direct rival Venezia and wait for a series of results that could save them.
2:14 PM7 days ago

What does Inter need to be champion?

Simone Inzaghi's men do not depend on themselves to be two-time champions. To remain in contention for the 'scudetto', Inter must win today against Cagliari and their last match against Sampdoria. However, they also need Milan to be defeated by Sassuolo in the last matchday. Should the Nerazurri lose today, they will have lost any chance of being crowned champions.
2:11 PM7 days ago

Both clubs have already arrived at Cagliari's stadium for this afternoon's match in the penultimate round of the Serie A season. 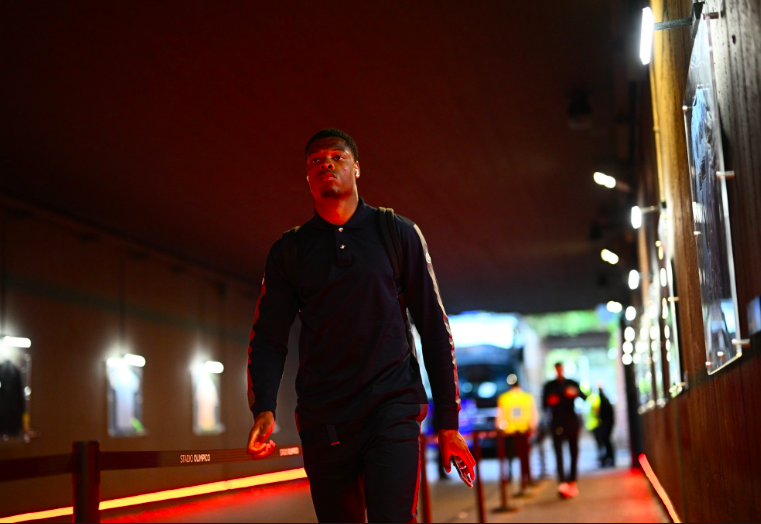 These two teams have met 93 times. The Sardinians have won 16 times, while Inter Milan have won 47 times and have only shared the points on 30 occasions. In the most recent meeting, the Nerazurri won by a score of 4-0.
1:57 PM7 days ago

The stadium that will host this match will be the home of Cagliari. Arena Sardinia is a soccer venue that is located in Cagliari, Italy. It was inaugurated in 2017 and is one of the most current, but smallest stadiums in Italy as it has a capacity to host 16 thousand spectators.

The match between Cagliari vs Inter is just under an hour away at the Arena Sardinia Stadium. Both teams are desperate for the three points, but with different purposes; the locals need the win to stay away from relegation while the visitors do not want to let go the hope of being champions. Will one of them get the victory? Follow our coverage on VAVEL USA.
1:24 AM7 days ago

Do not miss a detail of the match Cagliari - Inter with the live updates and commentaries of VAVEL. Follow along with us all the details, commentaries, analysis and lineups for this match.
1:19 AM7 days ago

How to watch Cagliari - Inter Live Stream on TV and Online?

If you want to watch the game Cagliari - Inter live on TV, your options are: Paramount +

If you want to directly stream it: Paramount + App

Joao Pedro is a 30-year-old Brazilian who has been Cagliari's star striker since 2014. He is the goal man of his team and is one of the most participative in Cagliari's offensive line. In this season he accumulates 13 goals. 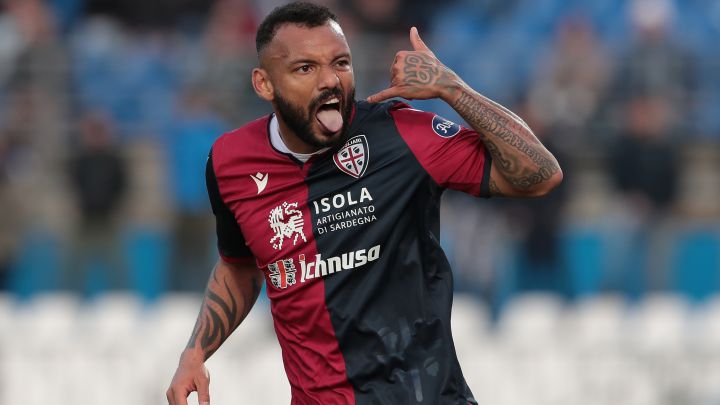 Lautaro Martinez | This Argentine player is synonymous with goals and many of them for the harvest of points, so he must continue with his scoring quota so that the Nerazurri can continue dreaming with the 'scudetto'. Lautaro comes from scoring a brace in the most recent match and accumulates 19 goals in the season. 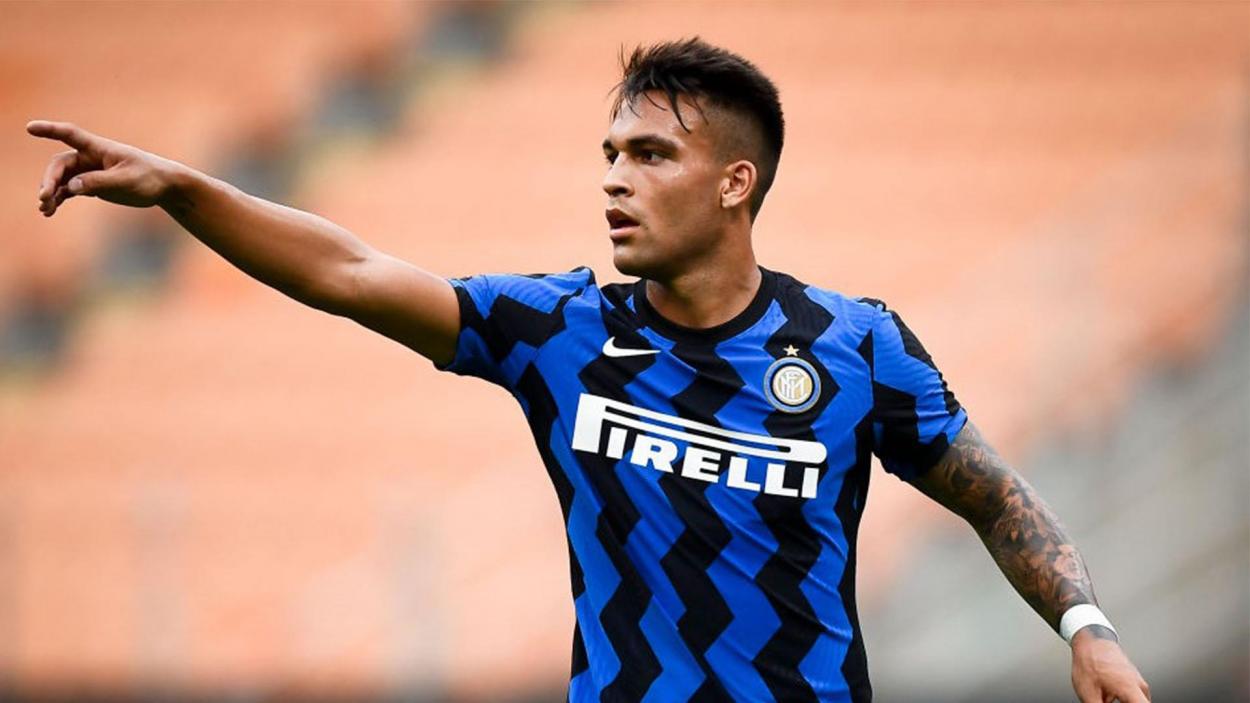 On the other hand, Conte's men have just won the Italian Cup against Juventus by an overwhelming score of 2-4. However, Inter want the double and, to do so, they have to win their two remaining matches and hope for a slip-up by Milan, who are two points ahead of them. The Nerazurri are also coming off a 4-2 Serie A win over Empoli. They are currently in second place with 78 points.
12:44 AM7 days ago

Cagliari: In the fight against relegation

Alessandro Agostini's team has the difficult task of staying in Serie A and taking points against a difficult opponent such as Inter. The islanders must take advantage of their home ground and secure the three points in order to move away from the bottom of the table, which would send them to Serie B. Cagliari has just managed to rescue a valuable draw against Salernitana which, although it did not add up to much, is a golden point because it came against a rival that is also fighting for relegation. The Sardinians are in 18th position with 29 points, only above Genoa and Venezia.
12:39 AM7 days ago

This afternoon, Sunday's activity corresponding to the penultimate day of Serie A, will have a match that will be key for both clubs. The Arena Sardinia Stadium will host a match where two teams want to go for the three points; on the one hand, Cagliari urgently needs a win to move away from the relegation zone, while Inter is still hoping to win the Serie A championship and wait for Milan to slip up.
12:34 AM7 days ago