In the last game of the season PSV gets the victory and closes the season with a positive result and Mvogo's show!

Redan is yellow carded for a hard tackle on Ledezma.
10:19 AM9 days ago

Anderson took off and hit a cross from the edge of the box, sending the ball into the right side of the goal!
10:16 AM9 days ago

Paal managed to get the shot from outside the area and Mvogo deflected it away!
10:08 AM9 days ago

Now we are! Ledezma received the long throw-in, came face to face with the goalkeeper and hit a cross to break the tie!
10:03 AM9 days ago

Gakpo found Ledezma in the box, who dominated, leaned and hit the goal, but in the hands of Lamprou!
10:02 AM9 days ago

Koolwijk got his shot in from outside the box, and once again Mvogo kept it out! And then Zwolle had a substitution, where de Wit and Beelen were replaced by Reijnders and van der Werff.
9:56 AM9 days ago

Anderson hit the ball hard from outside the area and forced Mvogo to save the ball far away!
9:52 AM9 days ago

Triple substitution at PSV: Bruma, Veerman and Madueke left to the entrance of Ledezma, Romero and Bakayoko. At Zwolle, Kasteneer left and Tedic came in.
9:49 AM9 days ago

Double substitution at Zwolle: Clement and Van den Belt left for Max de Waal and Koolwijk.
9:44 AM9 days ago

Kasteneer crossed from the right into the middle, and Redan dribbled the ball into the goal, but Mvogo worked a miracle and saved PSV with a beautiful save!
9:41 AM9 days ago

Gakpo hit it hard and stamped the right post, drawing a "wow" from the crowd!
9:38 AM9 days ago

Gakpo gets his first touch on the ball and it rolls into the second half of the match!
9:38 AM9 days ago

The teams return to the field to start the second half. PSV leave Max and enter Vos.

In an open and lively game, with one goal disallowed and one validated for each side, Zwolle and PSV draw 1-1 and go to the locker room with a point each!
9:21 AM9 days ago

Van Den Belt hit a shot from outside the box and sent it into the hands of Mvogo.
9:11 AM9 days ago

Gakpo received in the middle, got the pass to Madueke, who hit a cross that forced Lamprou to save and, in the rebound, Bruma hit the goal, but he was offside and the goal was disallowed.
8:59 AM9 days ago

On Nakayama's misplaced clearance, Gakpo raced up the attack field almost all the way, invaded the area and hit a cross, but Lamprou caught it!
8:57 AM9 days ago

In the corner coming from the left Nakayama managed to get the header and sent it into the hands of Mvogo.
8:53 AM9 days ago

In a cross from the left, the striker managed to deflect it and sent it into the back of the goal in the left corner, but he was offside and the goal was disallowed.
8:50 AM9 days ago

Kasteneer received in front, inside the area, and shot hard, sending it to the left angle of Mvogo, with no chance of defense!
8:45 AM9 days ago

Gakpo carried the ball and hit it towards goal, but with a deflection, the ball was left for Bruma inside the area, who shot low and opened the score!
8:44 AM9 days ago

In a long throw Kasteneer received in front, dominated and hit hard for goal, but Mvogo caught with his right foot and saved PSV!
8:37 AM9 days ago

Kasteneer got the first shot of the game, from the left, but it fell into the hands of Mvogo.
8:34 AM9 days ago

Redan makes the first touch on the ball and it rolls into the first half of the match!
8:31 AM9 days ago

The final round of the Eredivisie, being the last, will all be played today and at the same time as this match, with the following matches: Herenveen vs. Go Ahead Eagles, Heracles vs. Sparta Rotterdam, Vitesse vs. Ajax, Groningen vs. Cambuur, NEC vs. Fortuna SIttard, AZ vs. RKC, Feyenoord vs Twente and Willem vs Utrecht.
7:57 AM9 days ago

The players take to the field to begin their warm-up exercises.
7:48 AM9 days ago

PSV is scheduled to play with: 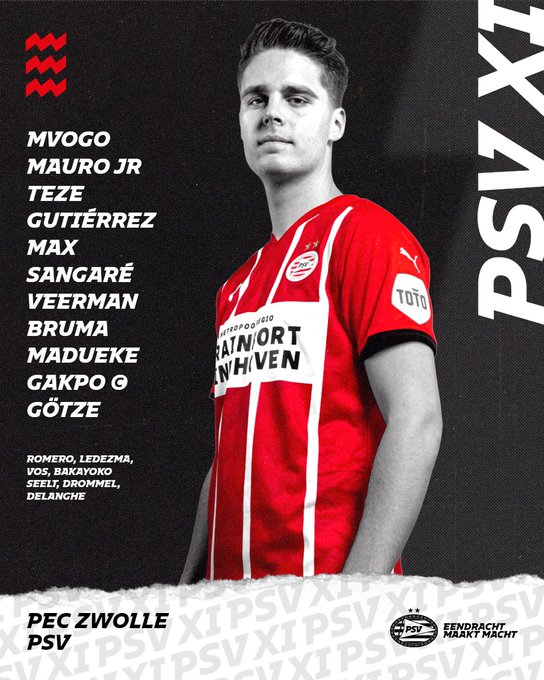 Zwolle is scheduled to play with: 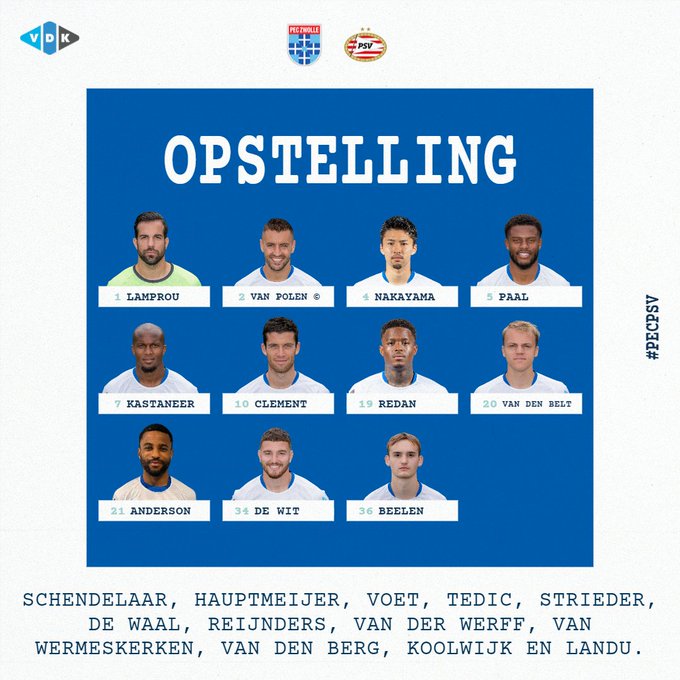 The broadcast of the Eredivisie final round match between Zwolle and PSV now begins!

Do not miss a detail of the match with the live updates and commentaries of VAVEL. Follow along with us all the details, commentaries, analysis and lineups for this Zwolle vs PSV match.
7:28 AM9 days ago

How to watch Zwolle vs PSVLive in TV and Stream

If you want to watch the game Zwolle vs PSV live on TV, your options is: none.

What time is Zwolle vs PSV match for Eredivisie?

This is the start time of the game Zwolle vs PSV of 15th May 2022 in several countries:

Edwin Van de Graaf will be in charge of the whistle in the last round of the Eredivisie.
7:13 AM9 days ago

The probable PSV team for the match is: Mvogo, Mauro, Teze, Gutierrez and Max; Sangare, Gakpo, Doan and Gotze; Madueke and Zahavi.
7:08 AM9 days ago

The probable Zwolle team for the match is: Lamprou, De Wit, Nakayama and Van Polen; Paal, Clement, Van den Belt and Anderson; Kastaneer, Redan and Adzic.
7:03 AM9 days ago

The situation in the G-3, the qualification place for European competitions - in addition to the title - is already defined. Ajax are the champions and are going to the Champions League with 82 points, while PSV have 78 points and are in second place going to the Europa League. Feyenoord, meanwhile, have 71 points and are in third place going into the Conference League. Meanwhile, Zwolle has already been relegated, with 27 points, and is in 18th position. Willem II have 30 points and are in 17th place, going straight to the second division. Fortuna Sittard have 32 points, in 16th, going to the playoffs to avoid relegation, tied on points with Sparta Rotterdam, two points behind Heracles and three behind RKC.
6:53 AM9 days ago

PSV comes to the match with a draw and a win in recent games. The draw was away from home, against Feyenoord, last Sunday (8), 2-2, with Gakpo opening the scoring and increasing the score in the first half, while Dessers decreased and tied the score. The victory was over NEC, 3-2, at home, last Wednesday (11), with Doan, Gutierrez and Zahavi scoring for PSV, while Duelund and Okita decreased.
6:48 AM9 days ago

Zwolle come into this final match on the back of a draw and a loss in their last two matches. The draw was on Saturday (7), against Ultrecht, Avest opening the scoring for Ultrecht and Redan equalizing. The defeat came on Wednesday (11), against Sparta Rotterdam, by 2-0, with goals from Auassar and van Crooy.
6:43 AM9 days ago

Welcome to VAVEL.com’s coverage of the 2021-22 Eredivisie match: Zwolle vs PSV Live Score!