In the last round of the group stage, Palmeiras duels against Deportivo Táchira, next Tuesday (24), while Emelec faces Independiente Petrolero, on the same day. Both games will be played at 8:30 pm ET.
7:55 PM2 months ago

Absolute leader, Palmeiras reaches 15 points with a 100% record. Emelec is second, with five, but could be overtaken by Deportivo Táchira, who play in the round.
7:54 PM2 months ago

Zapata receives from Quiroga on the edge of the area, dominates and knocks low. Weverton saves in two times and avoids the tie
7:40 PM2 months ago

Rony takes off at speed, enters the area and hits a cross. Ortíz comes out of the goal to smother. Rafael Navarro picks up the rebound, tries to get it away from the marking and sends it wide
7:36 PM2 months ago

Veiga takes a corner from the left, Rafael Navarro deflects it at the first post. Danilo plays and deflects in the small area
7:22 PM2 months ago

Out: Atuesta, Jorge and Scarpa

In: Raphael Veiga, Vanderlan and Dudu

Gabriel Menino crosses, Rafael Navarro takes it half-cocked and deflects with his shoulder. Even so, Ortíz is forced to palm the ball away with one hand
7:12 PM2 months ago

Danilo takes a chance from the edge of the area and sends a left-footed shot over the goal
7:10 PM2 months ago

Jackson Rodríguez, for lifting his foot too high and hitting Rony in the face
7:09 PM2 months ago

Rafael Navarro picks up an overhang and heads it into the middle of the goal. Ortíz grabs it
7:03 PM2 months ago

Carabalí, for a hard tackle on Gabriel Menino
7:02 PM2 months ago

Rony crosses low from the left. Gustavo Gómez deflects it weakly inside the small area and the goalkeeper grabs it on reflex
6:41 PM2 months ago

Rafael Navarro ginga in front of Quintero, opens with Marcos Rocha, who hits the mark
6:39 PM2 months ago

Scarpa takes a free-kick on the edge of the box towards goal. Ortíz falls to save the ball
6:35 PM2 months ago

Rony makes a throw-in, Atuesta runs over Ortíz, who ends up fouling him, and scores. The referee calls an attacking foul
6:33 PM2 months ago

Emelec has possession, but stays in its defensive field
6:25 PM2 months ago

Lastre gets the worst of a collision with Jorge. The midfielder is treated on the field
6:25 PM2 months ago

Scarpa takes a corner kick, the ball curves towards the goal. Ortíz appears to make the providential cut
6:18 PM2 months ago

Scarpa receives a throw-in, he can't control it, slips and Caicedo takes the opportunity to clear
6:12 PM2 months ago

Rony is picked up by Scarpa in the box. He tries hard, but can't reach
6:09 PM2 months ago

Scarpa makes a good individual play on the right side, invades the area and hits a cross. The ball goes out, passing very close to the post
6:08 PM2 months ago

Marcos Rocha finds Atuesta free in the area, the number 20 shoots, but misses over the goal
6:06 PM2 months ago

The referee blows the whistle
6:06 PM2 months ago

Palmeirense players in the preparation

Eye on the card: Emelec

Eye on the card: Palmeiras

How and where to watch the Palmeiras vs Emelec match live?

How and where to watch the Palmeiras vs Emelec match live?

If you want to watch the game Palmeiras vs Emelec live on TV, your options is:  beIN SPORTS

If you want to directly stream it: beIN SPORTS CONNECT

What time is Palmeiras vs Emelec match for the Libertadores?

This is the start time of the game Palmeiras vs Emelec of 18th May 2022in several countries:

Ismael Rescalvo will not be able to count on one of his key players: João Rojas. The number 10 shirt was unable to recover from a muscle injury. Bruno Pittón, Alejandro Leguizamón and Marlon Mejía are the other absentees.
4:35 PM2 months ago 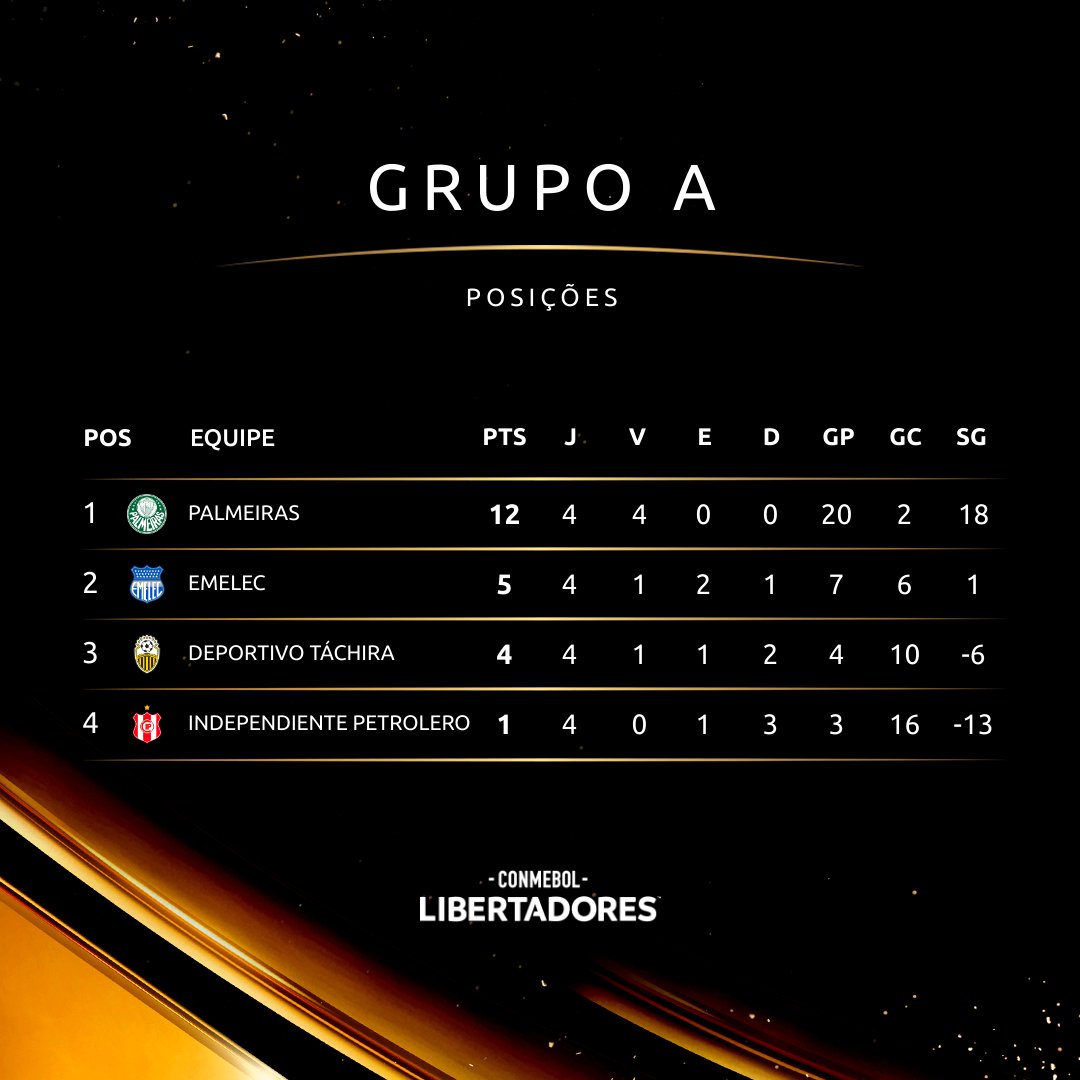 In second place, Emelec gained five points, with one win, two draws and one defeat. This is a score of 41%. The three points came in the last round when they beat Deportivo Táchira, 4-1, with whom they are disputing the classification - they are third with four.
4:15 PM2 months ago

With a 100% record, four games and four wins, Palmeiras has the best campaign of the group phase. This fact guaranteed their qualification for the round of 16. The Verdão (as they are known) is the leader of Group A, with 12 points.
4:10 PM2 months ago

Palmeiras vs Emelec, live this wednesday (18), at Allianz Parque, at 7pm ET, for the Copa Libertadores. The match is valid for the 5th round of the competition.
4:05 PM2 months ago

Welcome to VAVEL.com’s coverage of the Libertadores match: Palmeiras vs Emelec Live Updates!