Thank you for following the LAFC vs Austin FC minute by minute on VAVEL, continue to visit the site to find out everything that happens in the sports world.
12:37 AMa month ago

At the end of the match at the Banc Of California Stadium, LAFC falls to Austin FC and loses the MLS Western Conference lead to the visitors, a great result for Austin to start their reign in the conference!
12:24 AMa month ago

Attempt saved. Diego Palacios (Los Angeles Football Club) left footed shot from a difficult angle on the left is saved in the centre of the goal. Assisted by Kellyn Acosta.
12:04 AMa month ago

Attempt missed. Maximiliano Urruti (Austin FC) right footed shot from the centre of the box misses to the left. Assisted by Nick Lima.
12:01 AMa month ago

Attempt missed. Cristian Arango (Los Angeles Football Club) header from the centre of the box misses to the left. Assisted by Kellyn Acosta with a cross following a corner.
11:46 PMa month ago

Jhojan Valencia (Austin FC) is shown the yellow card for a bad foul.

Attempt saved. Kwadwo Opoku (Los Angeles Football Club) left footed shot from the right side of the box is saved in the bottom right corner. Assisted by José Cifuentes.
10:59 PMa month ago

Attempt missed. Ruben Gabrielsen (Austin FC) header from the left side of the box is high and wide to the left. Assisted by Alexander Ring following a set piece situation.
10:53 PMa month ago

Attempt missed. Danny Musovski (Los Angeles Football Club) header from the centre of the box is close, but misses to the right. Assisted by Ilie Sánchez with a headed pass following a corner.
10:47 PMa month ago

Attempt missed. José Cifuentes (Los Angeles Football Club) right footed shot from outside the box is high and wide to the right. Assisted by Carlos Vela.
10:41 PMa month ago

The match kicks off from the Banc of California Stadium, LAFC will be looking to beat Austin Fc in this midweek MLS matchday.
10:17 PMa month ago

In a couple of moments we will start with the rebroadcast of the LAFC vs Austin FC match; match corresponding to the regular phase of the MLS from the Banc of California Stadium.
10:13 PMa month ago

HOW IS THE MLS WEST TABLE GOING?

At the moment in the Western Conference, LAFC is still the leader with 23 points, followed by FC Dallas with 22 points, in third place is Austin FC with 20 points, in fourth place is the LA Galaxy with 19 points and next to them is Real Salt Lake with the same amount, in sixth place is the Dynamo with 15 points and in the last qualifying position is Nashville with the same 15 points.
10:09 PMa month ago

This is the starting eleven of Austin FC to get the victory at the Banc of California Stadium and give a blow of authority against the team from Los Angeles. 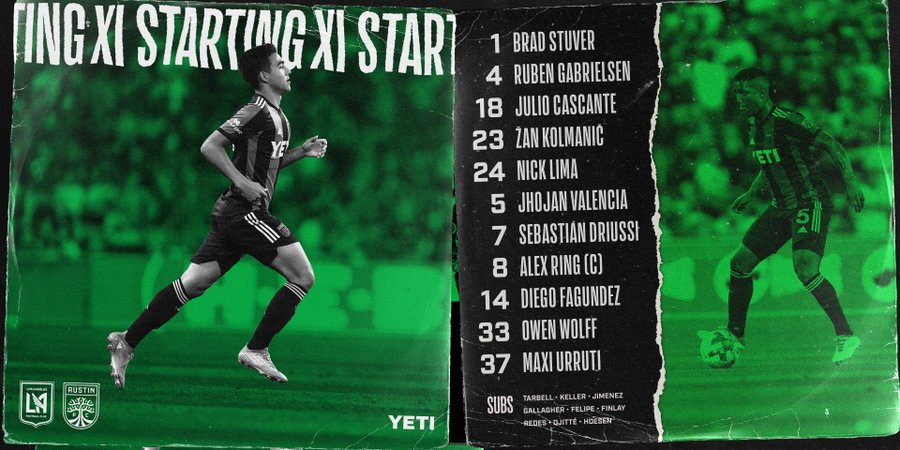 Austin FC visited Real Salt Lake, at the beginning it was the visiting team who took the lead, however, Daniel Pereira was sent off in the first minutes of the second half and that affected Austin FC as Mikel Chang and Andrew Brody would turn it around to finish the match 2-1 in favor of the locals.
10:02 PMa month ago

This is LAFC's starting eleven for their match against Austin FC, the team from Los Angeles will be looking for a victory and continue to maintain their stadium as a fortress. 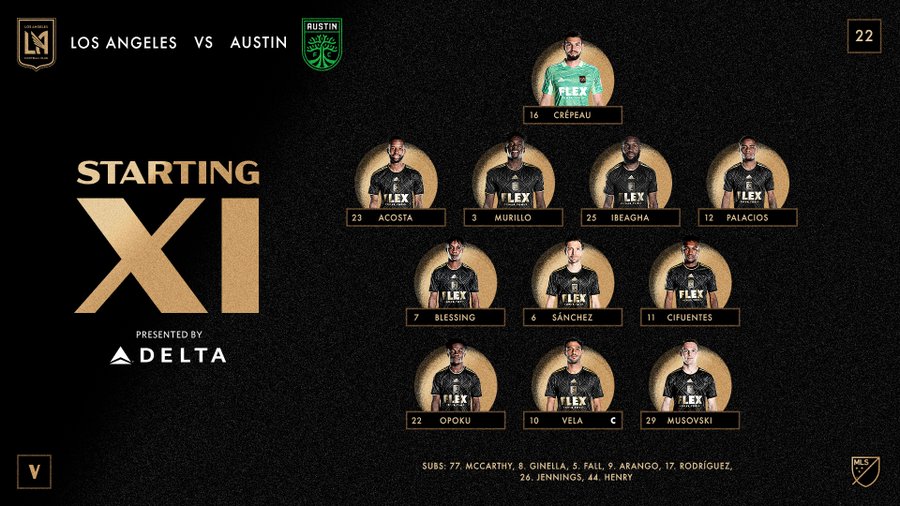 HOW DID LAFC DO IN THE LAST DUEL?

The Los Angeles squad traveled to Colorado to face the Colorado Rapids, however, things did not go as they would have liked, since in the 17th minute, Zardes put the 1-0 in favor of the locals through the penalty kick and minutes later, LAFC would miss a penalty kick that would sentence their defeat since in the 28th minute, Diego Rubio would seal the 2-0 through the penalty kick to give an important victory to the local squad. Even so, LAFC managed to remain the conference leader.
9:52 PMa month ago

HOW IS THE MLS ASSISTS TABLE DOING?

In assists, Austin FC's Diego Fagundez continues to dominate the league assists chart with 7 completed assists, he is followed in second place by New England's Carles Gil and Jan Gregus with 5 assists made in second place, in third place are Christian Espinoza, Derrick Etienne, Santiago Molina, Sebastian Blanco and Talles Magno with 4 assists in third place.
9:47 PMa month ago

HOW IS THE SCORING CHART IN THE MLS?

At the moment, Jesus Ferreira of FC Dallas is reigning in the scoring table with 9 goals, followed in second place by Jeremy Ebobisse, Jesus Nunez and Sebastian Driussi with 7 goals scored, in third place are Adam Buksa, Brandon Vasquez, Daniel Gazdag, Diego Rubio, Leonardo Campana and Valentin Castellanos are in third place with 6 goals scored so far this season.
9:42 PMa month ago

The wait is over in MLS, regular season action resumes and soccer returns to Los Angeles, California with the must-see match between LAFC and Austin FC from the Banc of California Stadium. The general leader will host the former runner-up of the Western Conference and one of the teams with the best offense in the entire league. Without a doubt, this is an unmissable duel in which both teams will dispute three very important points in this still early season.
9:37 PMa month ago

Do not miss a detail of the match with the live updates and commentaries of VAVEL. Follow along with us all the details, commentaries, analysis and lineups for this LAFC vs Austin FC match.
9:32 PMa month ago

What time is LAFC vs Austin FC match for MLS?

This is the start time of the game LAFC vs Austin FC of 18th May in several countries:

For this match, the experienced and captain of LAFC, Mexican Carlos Vela will be the player to watch throughout the 90 minutes. So far he has played 131 minutes out of 180, has participated in both matches played by LAFC, has scored 2 goals and has contributed with 3 assists. Therefore, Carlos Vela could at any moment tip the balance in favor of LAFC and give them the victory against Austin FC. 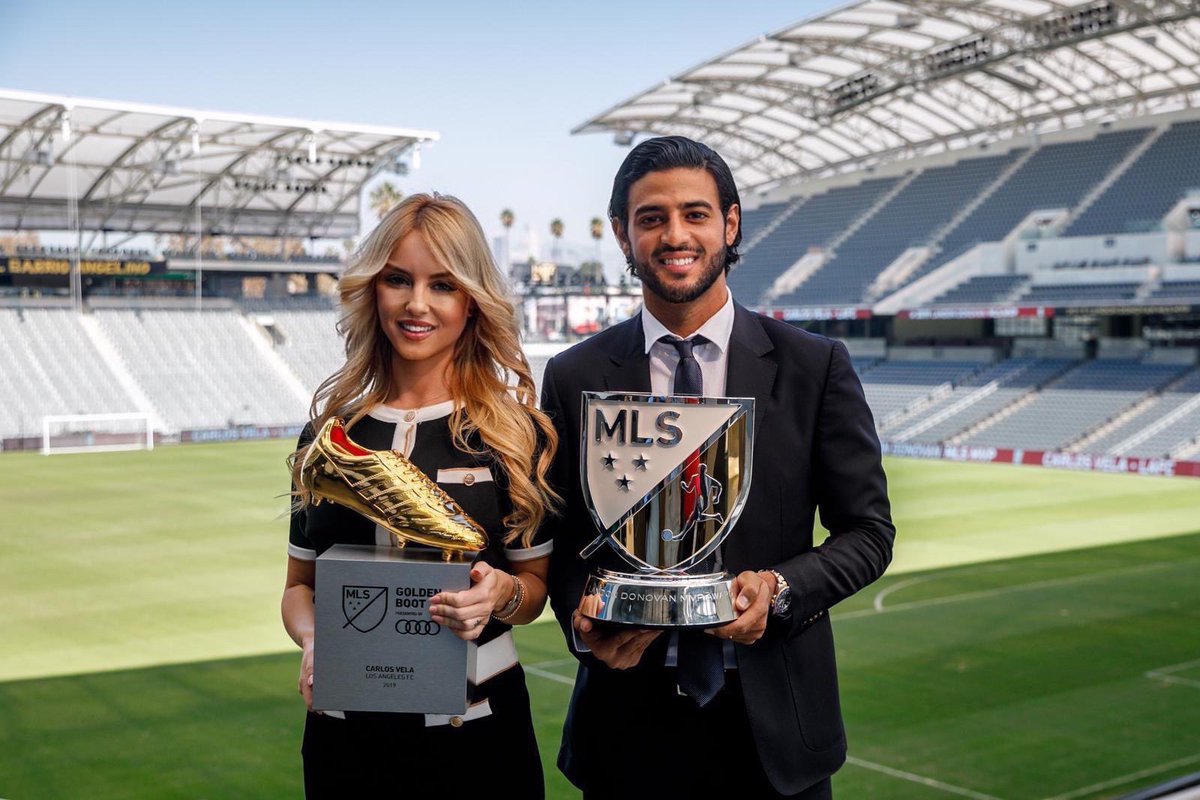 Watch out for this Austin FC player:

Sebastian Driussi will be the player to watch throughout this match for the Austin FC squad, the Argentinean and former River Plate has been having an incredible start to the season as he has positioned himself within the MLS scoring charts, likewise, he has become a key player for Austin FC in attack so they will have to watch out for the Angelina defensive saga if they want to avoid getting hurt under the three posts. 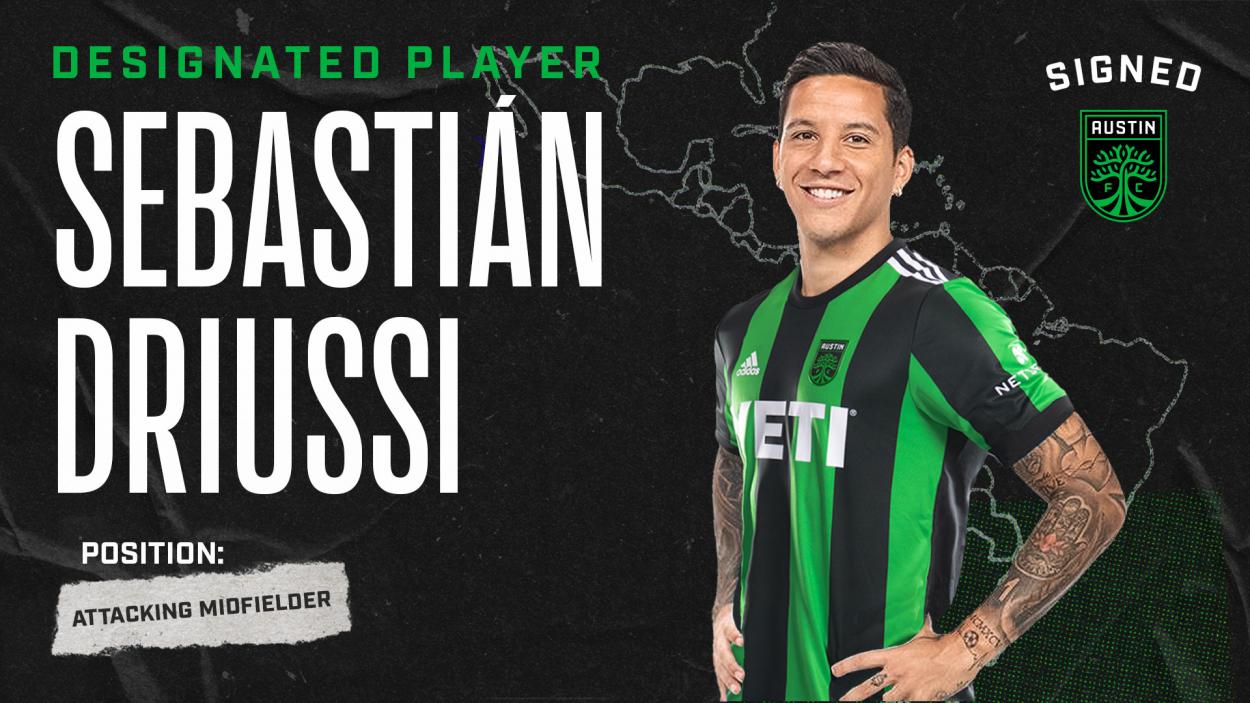 LAFC and Austin FC have only met 3 times all-time (3 wins for LAFC) where the scales tipped in favor of the Los Angeles side. In goals, it is LAFC who have the advantage with 6 goals to Austin FC's 1. Their last meeting dates back to matchday 6 of the 2021 season where LAFC won by a score of 1-2 away.
9:02 PMa month ago

The arena will be part of the downtown Olympic Sports Park and will host some men's and women's soccer events when Los Angeles hosts the 2028 Los Angeles Olympic Games.

Looking to impose themselves as visitors

Another team to consider this season has been Austin FC because so far this season and despite the little experience of the team after having been created a few years ago, the rookies have been talking about in MLS after being the overall runner-up in the Western Conference and making their home a real fortress to get points, likewise, they have a great team full of individualities as several of their men stand out in the scoring or assists charts, so they will be looking to pull off a surprise at the Banc of California Stadium and cause an upset to the overall leader.
8:52 PMa month ago

To make their stay at home count

On the other hand, LAFC is on a good pace in the eleven completed MLS rounds, as they are currently in first place overall in the MLS Western Conference with 26 points that have been the product of 8 wins, 2 draws and a loss. Likewise, after having a poor season in 2021, LAFC is repositioning itself as one of the teams that are beginning to raise their hand to be considered as a contender for this year's MLS title.
8:47 PMa month ago

Big game in the conference

MLS will have another great regular season match when LAFC hosts Austin FC at home, both teams have dominated the MLS Western Conference and so far, they are part of the few teams that have maintained their consistency at the beginning of the season, also, both have a great offensive power as in the case of Austin FC where two of his men are the kings in the scoring and assists tables, on the other hand, LAFC does not have great individualities but with a great collective game that has made them reign in the Western Conference.
8:42 PMa month ago

Welcome to VAVEL.com’s LIVE coverage of the 2022 MLS: Colorado vs LAFC!

Charlotte FC vs Austin FC preview: How to watch, team news, predicted lineups, kickoff time and ones to watch 14 hours ago

Chicago Fire vs Philadelphia Union preview: How to watch, kick-off time, team news, predicted lineups, and ones to watch 2 days ago

Houston Dynamo 2-0 Chicago Fire: Getting what you deserve 5 days ago

Seattle Sounders vs Sporting Kansas City preview: How to watch, predicted lineups and kickoff time in MLS 2022 5 days ago

Houston Dynamo vs Chicago Fire preview: How to watch, kick-off time, team news, predicted lineups, and ones to watch 7 days ago
//