It's over! Atlas beats Tigres at home and will arrive at the Volcán with an advantage.
11:59 PMa month ago

Close! Quiñones came close to scoring another great goal after shooting from midfield, but the ball went over the goal.
11:54 PMa month ago

Goal, goal, goal by Atlas! Quiñones rifles a shot from outside the box and Guzmán can't keep out the goal.
11:50 PMa month ago

Thauvin's shot and the ball goes over the end line.
11:47 PMa month ago

Tigres change. Soteldo comes off and Thauvin takes his place.
11:46 PMa month ago

He blew it up! Gignac was alone in front of goal, but sent his shot into the stands.
11:41 PMa month ago

Atlas change. Furch comes out for Ortega
11:40 PMa month ago

Goalkeeper! Great save by Camilo Vargas that ends up preventing Pizarro's goal, then the ball hits the crossbar.
11:39 PMa month ago

Close! Soteldo's shot on goal, but Aguilera ends up clearing the ball off the line.
11:33 PMa month ago

Goal, goal, goal for Atlas! A half-turn by Reyes and he sends the ball into the back of Nahuel's net.
11:17 PMa month ago

The last forty-five minutes of this duel begin.
11:08 PMa month ago

Halftime at the Jalisco, Atlas wins by the minimum.
10:43 PMa month ago

Reyes' cross, Quiñones' shot and Nahuel at the back prevents the second from going in.
10:42 PMa month ago

Goal, goal, goal for Atlas! Julio Furch sent a lethal shot, the ball hit the post and ended up going into Guzmán's goal.
10:39 PMa month ago

Penalty for Atlas! Chalá is brought down by Guzmán, and the referee does not hesitate to award the penalty.
10:37 PMa month ago

Luis Reyes' shot, but Guzmán keeps the ball without problems.
10:30 PMa month ago

Atlas insists, but the feline defense avoids the onslaught.
10:20 PMa month ago

Great play by Atlas, Chalá sends a cross to Furch, but the defense anticipates and rejects the ball.
10:12 PMa month ago

The match began with a fiercely contested start in the midfield, with both teams looking to gain possession of the ball.
10:02 PMa month ago

The first match of the semifinals of this Clausura 2022 kicks off, Atlas receives Tigres at the Jalisco.
9:58 PMa month ago

The fans are ready at the stadium, waiting for the match to begin, looking to take the first step for their team to reach the final.
9:47 PMa month ago

Atlas has already arrived at the Jalisco, ready to play this first match, where they will go all out for the victory. 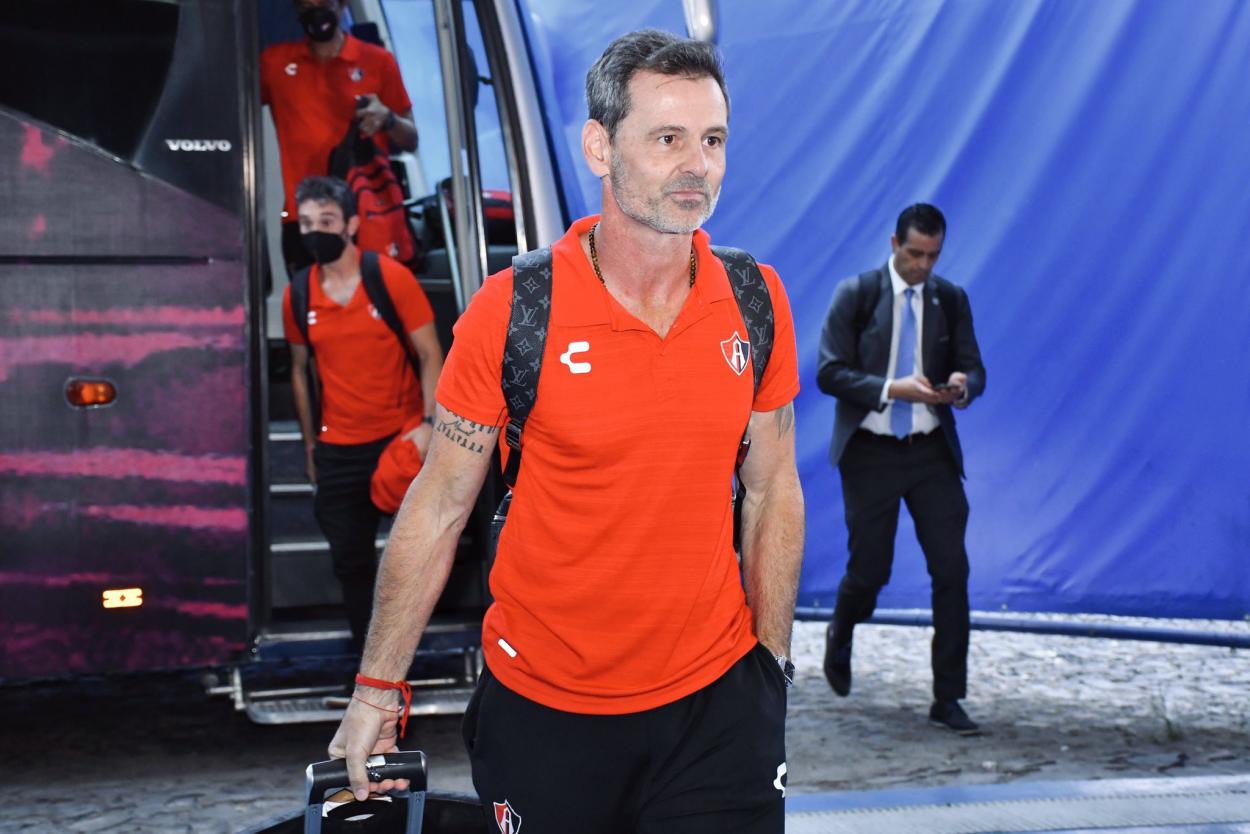 Tigres and Herrera are already at the Jalisco stadium, and tonight they will be looking to return home with a victory.
9:37 PMa month ago

Julio Furch spoke prior to this match: "The connection we have with the coaching staff has been the key. Diego has given us a lot of confidence and we fully trust in what he tells us and how to play this type of match".
9:32 PMa month ago

Atlas will be looking to neutralize Gignac, the Frenchman will go all out for Vargas' goal to score and put the felines ahead.
9:27 PMa month ago

Tigres will have to pay close attention to Julio Furch, the striker will be looking to generate danger and score in Guzmán's goal.
9:22 PMa month ago

Nahuel Guzmán and Camilo Vargas have shown enough security under the three goalkeepers, which has contributed to reach this stage, so tonight they will try to be the difference.
9:17 PMa month ago

Atlas and Tigres have faced each other on 51 occasions, in these matches Tigres has been victorious on 18 occasions, against Atlas' 14, while they have drawn nineteen times.
9:12 PMa month ago

Prior to this match, Herrera announced that Venezuelan Soteldo would start the match, the player has been looking for more playing time.
9:02 PMa month ago

In this event there will be 2,100 elements from different corporations, from private, to municipal and state police in order to ensure the safety of all attendees.
8:57 PMa month ago

Once again, Atlas is the one who is pulling out all the stops for the people of Jalisco and will be a worthy representative of the state in these semifinals, which is already beginning to be felt in the atmosphere.
8:52 PMa month ago

Stay tuned to follow Atlas vs Tigres live on TV.

In a few moments we will share with you the starting lineups for Atlas vs Tigres live, as well as the latest information from the Jalisco Stadium. Don't miss any details of the match with VAVEL's minute-by-minute live online coverage.
8:47 PMa month ago

How to watch Atlas vs Tigres Live Stream on TV and Online?

If you want to watch the game Atlas vs Tigres live on TV, your options is: TUDN.

What time is Atlas vs Tigres for the first leg semifinal of the Clausura 2022 Liga MX?

This is the kickoff time for the Atlas vs Tigres match on May 18, 2022 in several countries:

Miguel Herrera spoke ahead of this important match: "We're going to play it with a knife between our teeth, with our fingernails out, that's how you win these stages, but we'll try to play with our idea of being an attacking team that tries to create a spectacle, we're going to play with everything that the regulations allow us to use, we worked hard to be in positions one and two, which are the ones that give you an advantage in the Playoffs and we're going to use it. We were already out of that situation and that's why we had a good tournament, as high as possible in the table, we will try to maintain the idea of winning and we won't skimp on any play."

"Not losing men, we haven't had a game practically with a man down, that was the most serious mistake we made, facing the current champion who is doing things well but we are in the same situation, in the semifinals and we have to make our status as an important team having qualified in second place."

"Florian hasn't been in the rhythm of the game, it was a bit hasty to put him on the bench on Sunday, it wasn't ideal, but you were playing for everything. Then it was difficult to count on him to play, but today he is ready, we can use him."

"We have to attack, we are the best offense, then we will have to make the condition count, in the last matchday the team was decimated and we did not stop attacking, we managed to get a goal and the idea is that, to attack that team that defends well, we cannot change our way of thinking and we will try to do it from the idea".

"We did it over the same coverage match and we did it well, Angulo can play as a center back or a winger and he did it well against Cruz Azul, the idea is to play with the line that ended. Nahuel, Angulo, Guido, Igor, Ayala, Dueñas, Vigón and Rafa, Quiñones, Soteldo and André."

How did Tigres arrive?

Tigres arrived after eliminating Cruz Azul in the quarterfinals, despite not obtaining an aggregate score in their favor, which ended tied at one, but due to their position, the felines ended up going through. 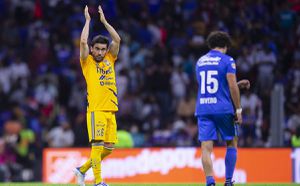 How does Atlas arrive?

Atlas arrives at this match after eliminating its rival in the quarterfinals with an aggregate score of three goals to two against Chivas. The red-and-black team arrives at this stage in third place in the general table, and in this match they will seek to demonstrate why they ended up in this position. 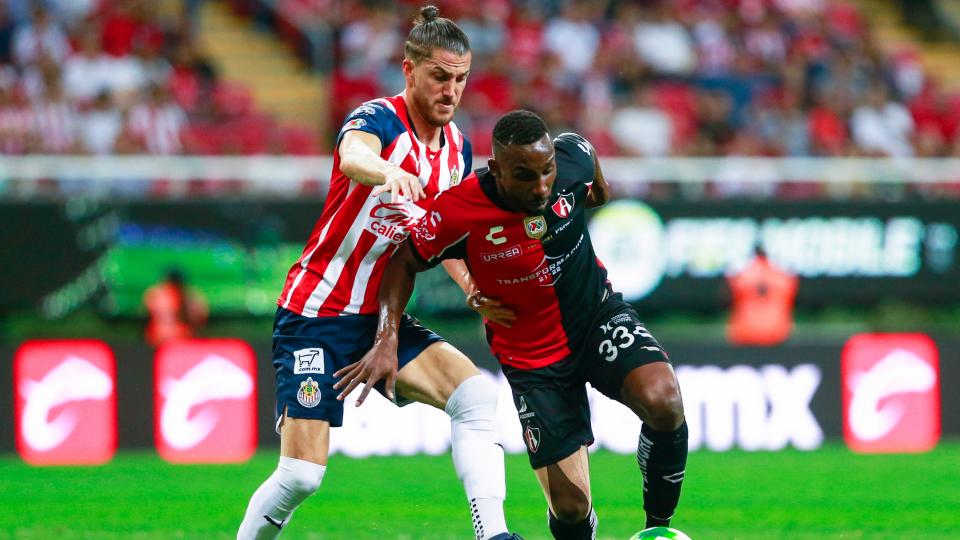 The Atlas vs Tigres match will be played at the Jalisco Stadium located in Guadalajara, Jalisco. The stadium has a capacity for 55,020 people.
8:07 PMa month ago