FOR4
END8 hours ago

Thanks for following this match on VAVEL USA. Until the next time!
4:49 PM4 days ago

Leipzig are champions after winning 4-2 on penalties.
4:48 PM4 days ago

Extra time ends. There will be penalty kicks.
4:34 PM4 days ago

The referee adds two minutes to the extra time.
4:33 PM4 days ago

The referee awards no penalty for Leipzig.
4:32 PM4 days ago

The referee is going to check a possible penalty for Leipzig.
4:31 PM4 days ago

POST! Another Freiburg shot crashes against the crossbar. They can't find the goal.
4:27 PM4 days ago

The referee adds one minute to the first overtime.
4:13 PM4 days ago

Freiburg: Haberer to Eggestein and Schmid to Kübler.
3:45 PM4 days ago

DANI OLMO! A powerful shot that passes very close to the left post.
3:42 PM4 days ago

FREIBURG ARE SAVED! Leipzig's free-kick is collected and, after a series of bounces inside the six-yard box, no one is able to finish.
3:41 PM4 days ago

Freiburg: Holer and Sallai are out; Demirovic and Petersen are in.
3:36 PM5 days ago

Freiburg wants to take advantage of the extra man on the pitch. They are going deep but are not convincing.
3:23 PM5 days ago

Leipzig: Silva and Forsberg are out, Mukiele and Szoboszlai are in.
3:20 PM5 days ago

THE SECOND ONE IS CLOSE! Grifo takes a free kick that goes just wide of the goal.
3:17 PM5 days ago

Marcel Halstenberg is sent off by the referee.
3:09 PM5 days ago

Nkunku turns inside the box to take a shot that Flekken saves well from underneath.
3:05 PM5 days ago

The referee adds one minute to the first half.
2:42 PM5 days ago

Final stretch of the first half. Leipzig have possession, but can't get forward with any real impact.
2:34 PM5 days ago

We reached the half-hour mark. Leipzig are still searching for the equalizer.
2:25 PM5 days ago

On the line! Gulde combs the ball in for Nkunku's shot, but the Freiburg captain saves almost on the goal line to prevent the equalizer.
2:20 PM5 days ago

Nkunku! First arrival of Leipzig with a rebound from Flekken that ends up at the feet of Nkunku, but there is a deflection and there is a corner kick.
2:12 PM5 days ago

A great chance for Freiburg with a pass into the box where Kubler cuts back, makes one too many moves, and misses the danger with a rebound from the defense.
2:10 PM5 days ago

First minutes of the match and Freiburg are looking more involved in the game.
2:01 PM5 days ago

Stay tuned to our coverage. The match of this great final is just minutes away.
1:50 PM5 days ago

The Olympic Stadium in Berlin is full to capacity. There is a great atmosphere in this great DFB Pokal final that will see a new champion. 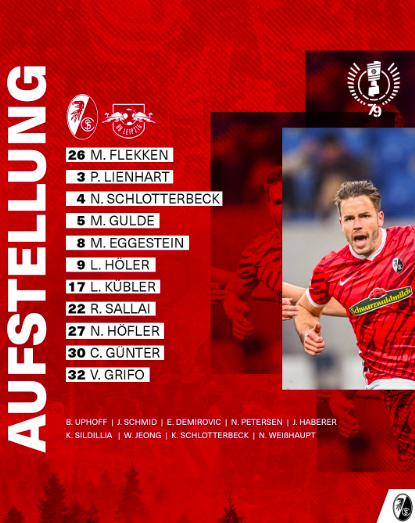 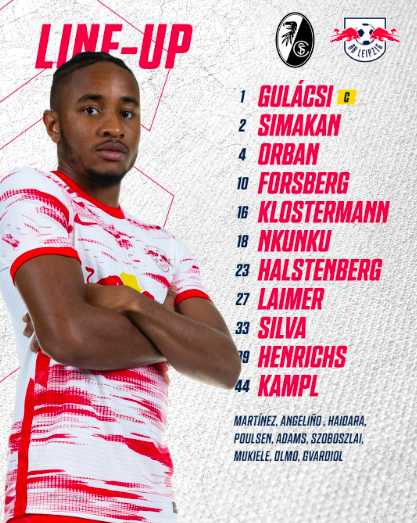 How did they do in the Bundesliga?

Freiburg finished their local league season in sixth place, a position that will allow them to play in the Europa League next season. Leipzig, on the other hand, finished in fourth place in the Champions League.
1:31 PM5 days ago

For this match, Freiburg will be without Schade and Weihaupt, both due to injury. Leipzig, on the other hand, will have a full squad for the final.
1:25 PM5 days ago

Fans of both the Red Bulls and the Vultures are already outside the Berlin Olympic Stadium for the DFB Pokal final. There is a great atmosphere between the two sides. 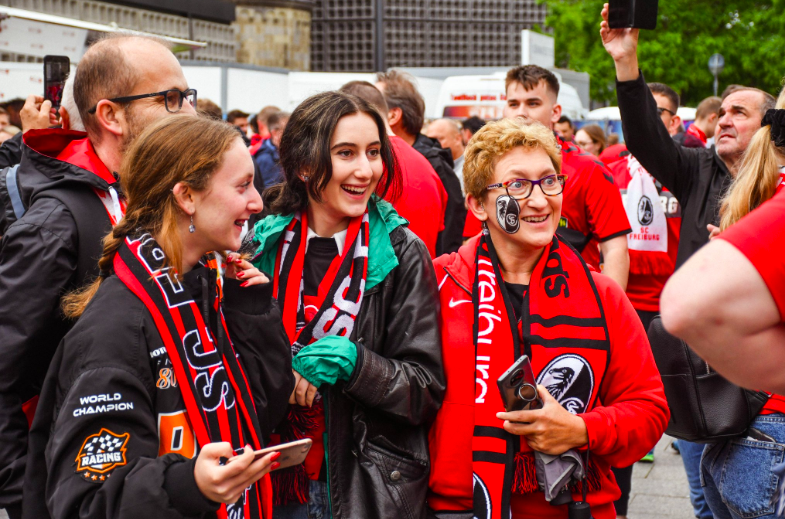 In the most recent matches between these two teams, the balance is in favor of Leipzig with 6 wins, 4 draws, and 4 wins for Freiburg. The last meeting between the two clubs took place last March in the Bundesliga where they played to a one-goal draw.
1:10 PM5 days ago

The great venue for this DFB Pokal final will be the Berlin Olympic Stadium, one of the oldest soccer stadiums in Germany. It is located in the capital of Germany and has a capacity of just over 74 thousand spectators. 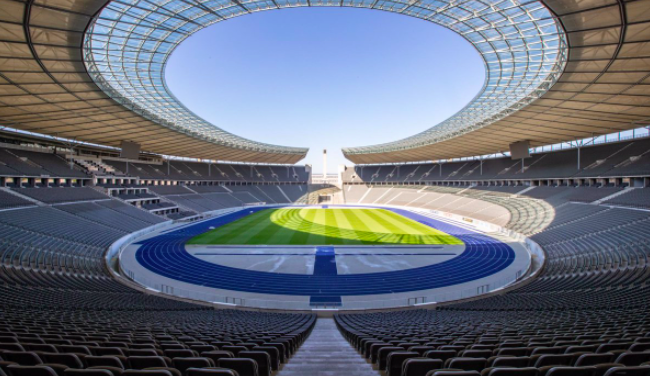 We are just under an hour away from the DFB Pokal final kicking off at the Olympic Stadium in Berlin. Both Freiburg and Leipzig are looking to bring joy to their fans by winning the first official title in the history of both clubs. Who will be crowned champions? Follow our coverage on VAVEL USA.
7:23 PM5 days ago

Do not miss a detail of the match Freiburg - Leipzig with the live updates and commentaries of VAVEL. Follow along with us all the details, commentaries, analysis and lineups for this match.
7:18 PM5 days ago

How to watch Freiburg - Leipzig Stream on TV and Online?

If you want to watch the game Freiburg - Leipzig live on TV, your options are: ESPN +

Christopher Nkunku | Like Grifo, Nkunku is a talented midfielder. At just 24 years of age, this French player has earned himself a starting place in Tedesco's team. His numbers back him up, and this season he has scored 34 goals in all competitions, being one of the top scorers in the Bundesliga with 20. Christopher Nkunku is fast and likes to play on the flanks. He is Leipzig's main engine so it will be important for him to have a great game today if he wants his club to be champion of this German Cup. 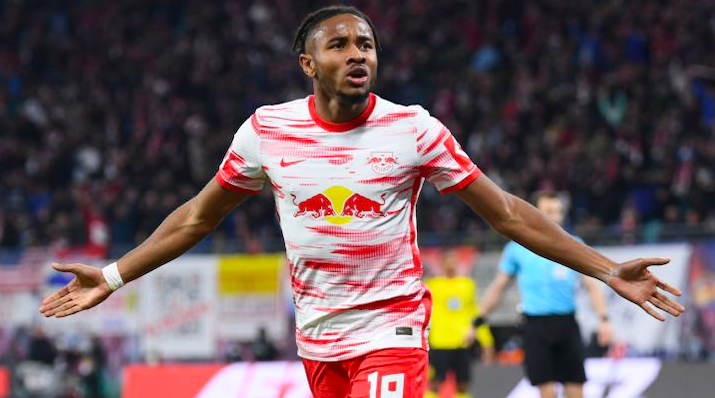 Vicenzo Grifo | This 29-year-old Italian midfielder is one of Freiburg's most talented players. He has 19 goals this season (between Bundesliga and DFB Pokal) of which 4 have been in the German Cup, one behind the leader. This afternoon, if he scores, he would be this season's DFB Pokal top scorer. A tall player who goes well over the top and who also has virtues such as speed and a great strike from outside the box. He scored in the semi-final against Hamburg. 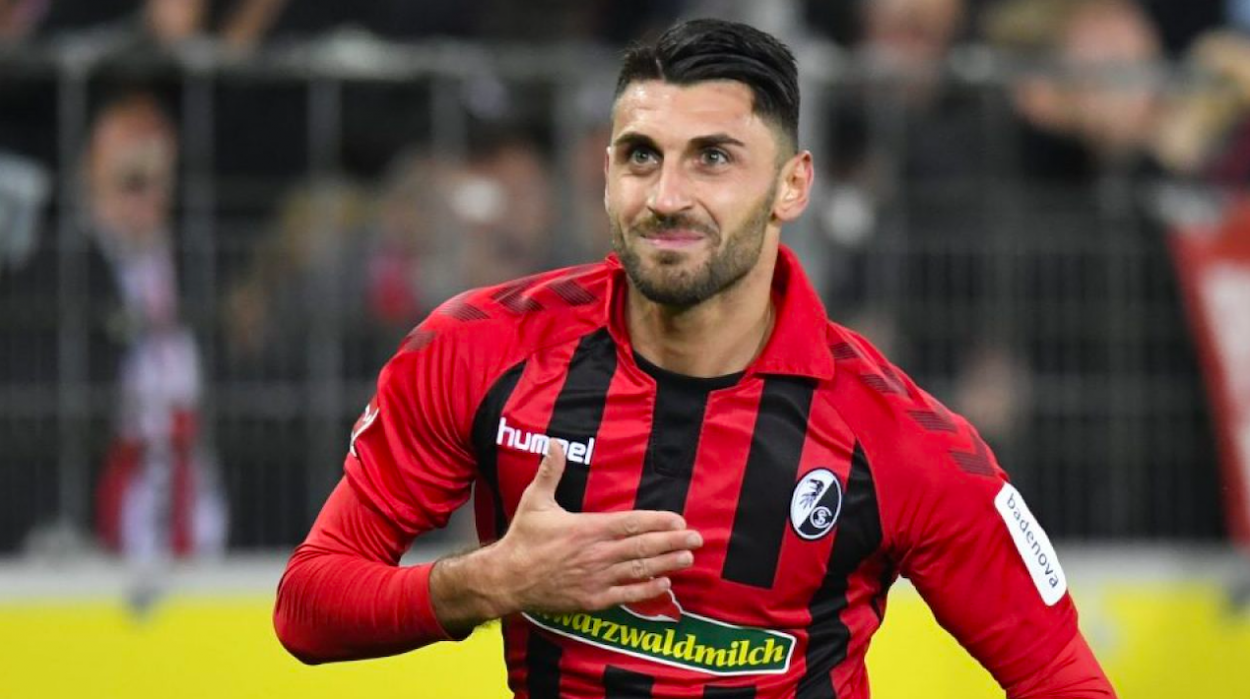 On the other hand, Leipzig, led by Domenico Tedesco, is the favorite to win the German Cup. The Red Bulls have had a good semester in their respective competitions as they were able to position themselves in the Bundesliga to compete in the next Champions League season. In the Europa Leage, Leipzig reached the semifinals where they were defeated by Rangers, however, they were able to reach the DFB Pokal final after overcoming a 1-0 deficit against Union Berlin. The winning goal came in the 92nd minute and Leipzig won 2-1 to reach the final, which, like Freiburg, they are looking to win for the first time.
6:43 PM5 days ago

Freiburg: Surprise against the favorites

Freiburg, led by Christian Streich, start as victims in this grand final, but have the same desire as tonight's opponents to win an official title for the first time, something they have been denied in 117 years of history. The Vultures come into this grand final having eliminated Hamburg with a resounding 1-3 scoreline. Three goals in the first half were enough to advance to the final and face Leipzig. In their home league, Freiburg are on a good run. They have won two of their five matches, drawn one and suffered one defeat, which came last matchday against Leverkusen by a score of 2-1. The goal that would give the victory to the team of 'the aspirins' would come at 97'.
6:38 PM5 days ago

This afternoon, the DFB Pokal season comes to an end with the grand final between two title-hungry teams that could win the first title in their history. An unprecedented final will take place at Berlin's Olympic Stadium between Freiburg, one of the most beloved teams in Germany, and Leipzig, who, in this match, are the favorites to win the German Cup for the club's trophy cabinet.
6:33 PM5 days ago

The match will be played at the Stadium Olimpico de Berlin

The Freiburg - Leipzig final match will be played at the Stadium Olimpico de Berlin, in Berlin, Germany. The kick-off is scheduled at 2:00 pm ET.
6:28 PM5 days ago