Thank you for listening to this Serie A match. Have a good afternoon and see you next season!

In the last match of the season Inter wins against Sampdoria and says goodbye to the fans taking another three points, although not the cup!

Substitution in Sampdoria: Rincón and Yepes came in.
1:43 PMa month ago

Augello received on the left, inside the area, shot hard and forced Handanovic to save for a corner! Yoshida and Vieira left Sampdoria for Magnani and Askildsen.
1:39 PMa month ago

Çalhanoglu hit the goal from the left and Laudero picked up to save Sampdoria once again!
1:38 PMa month ago

Double substitution in Inter: Correa and De Vrij are out, Caicedo and Ranocchia are in.
1:34 PMa month ago

Çalhanoglu got his free-kick on goal, and Laudero deflected. On the rebound Dimarco shot and the goalkeeper took one more!

Yellow for Ferrari, for pulling Lautaro's shirt on the counter-attack.
1:28 PMa month ago

Substitution in Sampdoria: Candreva and Thorsby left for Trimboli and Damsgaard.
1:24 PMa month ago

Substitution in Inter: Perisic, Bastoni and Barella left for Gosens, Dimarco and Vidal.
1:23 PMa month ago

Correa took off alone, invaded the area and tried the dribble until he succeeded in dividing with the defender, to hit a cross and make one more!
1:21 PMa month ago

Perisic received on the left and passed to Çalhanoglu, who found Correa in the area, who hit a strong cross to extend the score!
1:15 PMa month ago

Perisic received a pass from Barella inside the area, came face to face with Laudero and this time there was no way, with the finish the Croatian wing opens the score!
1:13 PMa month ago

Correa managed a beautiful back heel pass to Barella, who arrived with a shot that Laudero had to put over the goal!
1:10 PMa month ago

Lautaro Martínez makes the first touch on the ball and it rolls into the second half of the match.
1:10 PMa month ago

The teams appear on the field to start the second half of the match.

No goals and no timeouts end the first half of Inter and Sampdoria at the San Siro. The problem is that Milan goes on to win 3-0 and clinches the cup.
12:47 PMa month ago

Correa received on the left and hit it hard, but Laudero spread the ball to the middle, where Correa himself hit the rebound and sent it to the left side of the goal!
12:39 PMa month ago

Laudero made the save on another shot by Lautaro inside the box.
12:33 PMa month ago

Candreva got the shot off and sent it through the right side of the goal!
12:29 PMa month ago

Perisic got the cross and Lautaro Martínez headed and sent it in from the right side of the goal!
12:14 PMa month ago

Çalhanoglu hit hard from outside the area and sent it into the hands of Audero, who did not give a rebound.
12:10 PMa month ago

Yoshida is yellow carded for a foul on Correa in the midfield.
12:05 PMa month ago

Caputo makes the first touch on the ball and it rolls into the first half!
11:58 AMa month ago

The last round of Serie A matches started on Friday (20), with Roma beating Torino 3-0. Yesterday, Bologna beat Genoa 1-0.

The players take to the field to begin their warm-up exercises.
11:30 AMa month ago

Sampdoria is lined up and will go into the decider with: 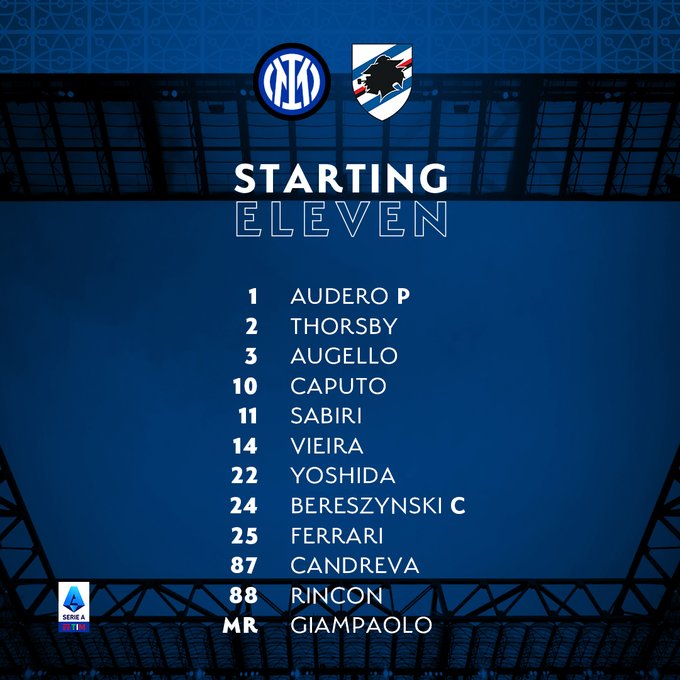 Inter is lined up and will go into the decider with: 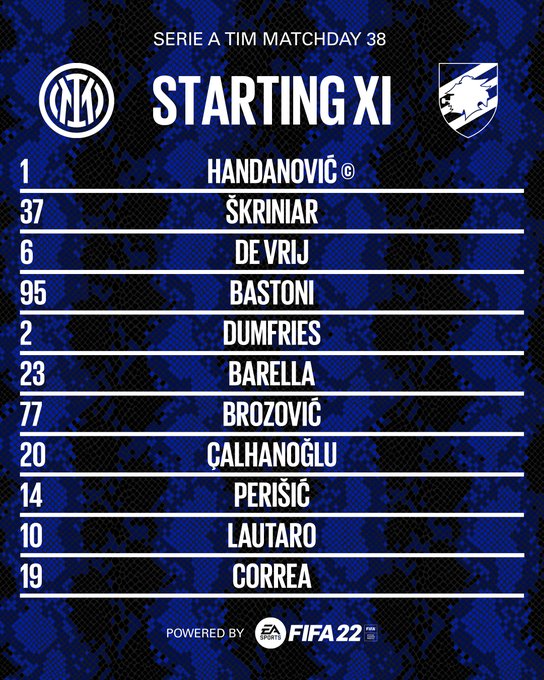 Now begins the broadcast of the decisive final Serie A match, which could give the title to AC Milan or Inter!

Do not miss a detail of the match with the live updates and commentaries of VAVEL. Follow along with us all the details, commentaries, analysis and lineups for this Inter Milan vs Sampdoria match.
11:10 AMa month ago

If you want to watch the game Inter Milan vs Sampdoria live on TV, your options is: none.

If you want to directly stream it: Streaming services and CBS Sports Network, Paramount + app.

What time is Inter Milan vs Sampdoria match for Serie A?

This is the start time of the game Inter Milan vs Sampdoria of 22th May 2022 in several countries:

Marco Di Bello will referee the match, with assistants Fabiano Preti and Alessandro Giallatini. Massimiliano Irrati will be in charge of VAR.
10:55 AMa month ago

For this match, Internazionale will have only one absentee: Gagliardini, who continues to treat a foot injury. Sampdoria won't be able to use Colley, who was suspended for a red card in the last match, and Sensi, who is injured.
10:40 AMa month ago

Internazionale dream of winning the Serie A title. Inter have 81 points and are exactly two points behind leaders AC Milan. Milan play at the same time, against Sassuolo, away from home, and for Inter to be champions they must hope for a stumble from their rivals, more precisely a defeat. In case of a draw in the Milan game (in the title scenario Inter MUST WIN) the first tie-breaker would be the head-to-head and Inter was defeated by Milan 2-1 and drew 1-1 in the two Serie A games, so the title would be Milan's in this situation.
10:35 AMa month ago

Sampdoria, meanwhile, come into the match on the back of two wins and a draw. On April 30, Samp beat Genoa 1-0, with a goal by Sabiri. On Saturday (April 7), the defeat came to Lazio, 2-0, with Gabarrón and Luis Alberto scoring. And last Monday (16) Sampdoria beat Fiorentina 4-1, scoring with Ferrari, Quagliarela, Thorsby and Sabiri, while Gonzalez scored at the end.
10:30 AMa month ago

Inter Milan is on a three-game winning streak and won one of them. On Friday (6) Inter received Empoli and won 4-2, when Pinamonti opened the scoring, Asilani added to his tally and Romagnoli, who scored an own goal. Then Lautaro equalized, then turned and saw Alexis Sánchez turn the comeback into a rout. After that, on Wednesday (11), Inter met Juventus in the Coppa Italia final and won 4-2 in extra time. Barella opened the scoring, Alex Sandro equalized, Vlahovic turned and Çalhanoglu equalized again. Then in extra time Perisic scored twice to give Inter the title. And last Sunday, Inter Milan beat Cagliari 3-1, with Darmian opening the scoring, Lautaro Martínez enlarging the lead, Lykogiannis pulling one back, and Lautaro, once again, giving the final numbers to the game.
10:25 AMa month ago

Welcome to VAVEL.com’s coverage of the 2021-22 Série A match: Inter Milan vs Sampdoria Live Score!