Thank you for following the Mexico-Nigeria friendly game for the 2022 FIFA World Cup.
10:03 PMa month ago

Nigeria's shot from half distance goes over the bar.
9:48 PMa month ago

Lainez's shot inside the box is deflected by the defender.
9:43 PMa month ago

Álvarez and Lainez are substituted

Gallardo's cross is not finished by Gutiérrez and goes over the goal.
9:33 PMa month ago

Mbaoma enters the field and Moffi leaves, change of NIgeria.
9:28 PMa month ago

Alvarado's shot goes over the top of the goal.
9:23 PMa month ago

Good individual play by Terem Moffi who enters the area and shoots a shot that goes wide.
9:18 PMa month ago

Martín, Gutiérrez and Pineda come in.

Montes lies down and leaves the field of play.
9:08 PMa month ago

Troost-Ekong miskicks a cross from the six-yard box and sends it into his own net to make it 2-1 after Gallardo's cross.

Cyriel Dessers' header goes past Cota to make it 1-1.

Nigeria counter-attack and the Mexican defense manages to deny them inside the box.
8:43 PMa month ago

Gallardo's service is cut off by the defense at the near post and sent off for a corner kick.
8:38 PMa month ago

The second half begins between Mexico and Nigeria.
8:33 PMa month ago

Gallardo controls the cross to the far post and chests it down to Cota.
8:18 PMa month ago

Jiménez is knocked down and the referee has not sanctioned an infraction.
8:13 PMa month ago

Andrés Guardado's cutback and shot is saved by the goalkeeper.
8:08 PMa month ago

Service to the area that Cota controls without giving rebounds.
8:03 PMa month ago

Aguirre was penalized for offside on the right wing.
7:58 PMa month ago

After the goal, the game has slowed down a bit, but Mexico still owns the ball.
7:53 PMa month ago

The ball rebounded to Giménez and he volleyed the ball over the top of the goal.
7:48 PMa month ago

Guardado's cross and low shot, which the Nigerian goalkeeper makes a spectacular save.

Roberto Alvarado was penalized for offside.
7:38 PMa month ago

Gimenez hits the ball in the box and beats the goalkeeper, but the rebound comes back to him and the ball goes into the back of the net for the 1-0 lead.

The goalkeeper has to come out in time for the delayed header because Gimenez was already lurking.
7:23 PMa month ago

Dangerous cross by Aguirre that is turned away by the defender for a corner kick.
7:18 PMa month ago

Aguirre's cross into the goalkeeper's hands.
7:13 PMa month ago

A short pass from Romo but Aguirre crashes the ball to win a side kick.
7:03 PMa month ago

The game between Mexico and Nigeria begins.
6:58 PMa month ago

The national anthems of Mexico, the United States and Nigeria are played.
6:53 PMa month ago

We are just minutes away from the start of the Mexico-Nigeria friendly match of the FIFA World Cup.
6:48 PMa month ago

Guillermo Ochoa pointed out that no matter which players go to the World Cup or stay out, Tata will have the support because he has made a strong group since he arrived at El Tri.

"Tata has maintained a range of players since the first Gold Cup (year 2019) and has worked to keep polishing the style of play; the boss of the ship is Tata, the one who decides which players go to the National Team is him and we have to support."

The Mexican National Team has arrived at AT&T Stadium with the mission of starting its tour of the United States on the right foot.

Mexico's jerseys are ready for this game, where they will wear the white jersey:

Little by little, Aztec fans are arriving at Dallas Cowboys Stadium for this afternoon's game: 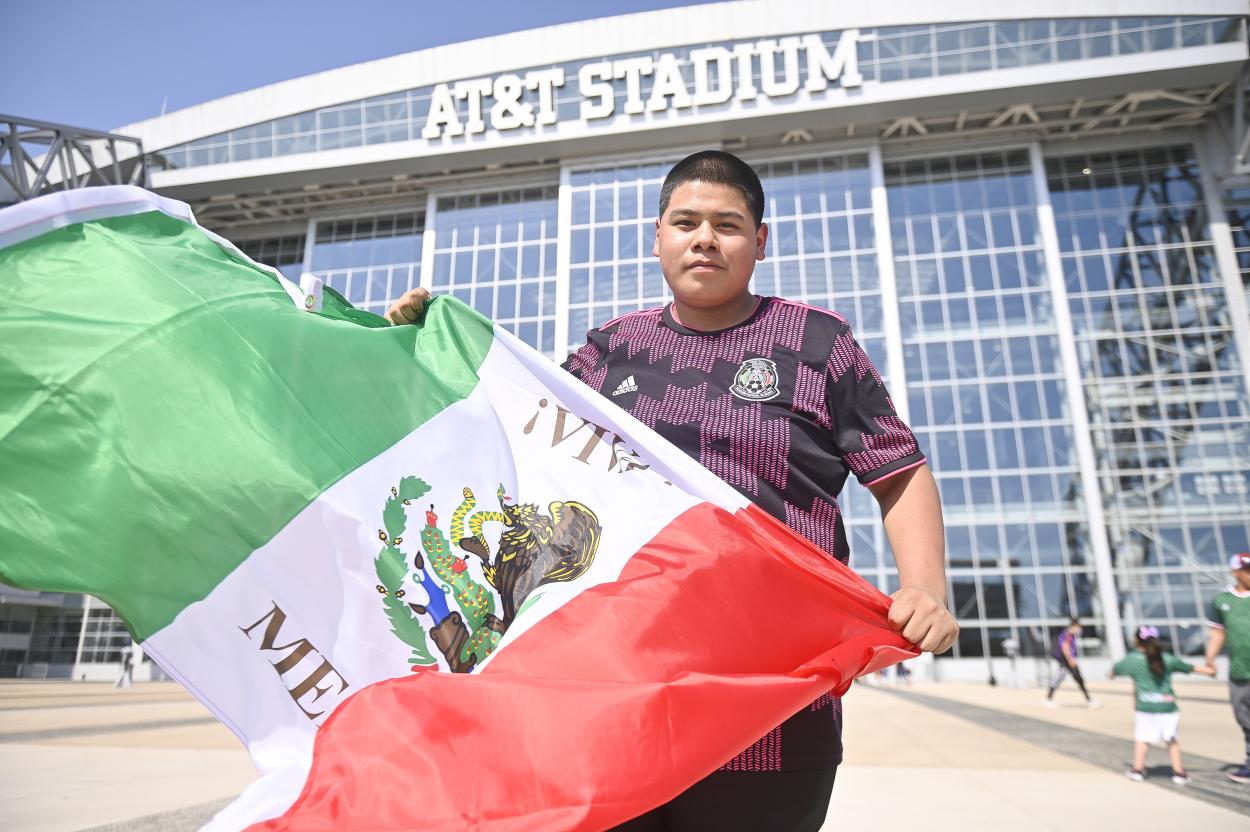 After the failure to reach Qatar 2022, Nigeria chose Portuguese coach José Peseiro as its new coach, who will have the task of bringing the national team back to the top of the table ahead of the next World Cup.
5:58 PMa month ago

Both Javier Hernandez and Gerardo Martino confessed that there were talks this week where, according to some sources, Chicharito had offered apologies in order to return; however, Martino does not see it as mandatory to call him despite this conversation. We will see what happens in the coming weeks.
5:53 PMa month ago

Mexico's first friendly game of the summer will kick off in the United States when it takes on, for the second year in a row, the Nigerian national team. We begin with VAVEL's coverage of the game.
5:48 PMa month ago

Do not miss a detail of the match with the live updates and commentaries of VAVEL. Follow along with us all the details, commentaries, analysis and lineups for this Mexico vs Nigeria match for the Friendly Game 2022 on Dallas, United States.
5:43 PMa month ago

What time is Mexico vs Nigeria match for Friendly Game 2022?

This is the start time of the game Mexico vs Nigeria of May 28th in several countries:

In the last 10 years, this will be the fourth meeting between the two nations, with Mexico having only beaten the African team once in two draws:

One of the Eagles' benchmarks is Napoli striker Osimhen, who has been one of the highlights of a team that was left on the brink of going to the World Cup after losing the re-qualification against Ghana.
5:28 PMa month ago

It should be noted that this week Yon de Luisa, president of Femexfut, indicated that they will have the support of Liga MX to finish the tournament earlier and have the players a few more days ahead of the Qatar 2022 World Cup.

"We have received the support of Liga MX at all times. We are an extraordinary Federation in that sense of the good relationship between the League and the Federation, like last Monday when it was announced that the tournament ends on October 30, which will allow us to have a few extra days, which will allow us to fly to Europe and have that work prior to our arrival on 17 (November) to the World Cup," he said.

A total of 38 players were called up by Gerardo Martino for this series of friendlies ahead of the next World Cup, to be held in November in Qatar.

The Mexico vs Nigeria match will be played at the AT&T Stadium, in Dallas, United States. The kick-off is scheduled at 8:10 pm ET.
4:58 PMa month ago

Welcome to VAVEL.com’s LIVE coverage of the Friendly Game 2022: Mexico vs Nigeria!

Charlotte FC vs Austin FC preview: How to watch, team news, predicted lineups, kickoff time and ones to watch 15 hours ago