Thank you for following the VAVEL webcast.

Thank you for following the minute-by-minute coverage of San Vicente vs Nicaragua on VAVEL, continue to visit the VAVEL website to keep up to date with the latest news from the world of sports.
4:58 PMa month ago

The match is over, San Vicente gets a point on the Arnos Vale pitch in a vibrant 2-2 draw against Nicaragua. For the moment it is the visiting team who remains as group leader pending what happens in the next match.
4:43 PMa month ago

Kevin Francis headed alone towards the goalkeeper but his shot ended up just wide of the posts.
4:18 PMa month ago

Henry Niño almost scored a great goal but the ball hit the crossbar.
4:09 PMa month ago

The second half starts from the Arnos Vale Stadium, both teams are tied on the scoreboard.
3:54 PMa month ago

The first 45 minutes are over from the Arnos Vale Stadium, Nicaragua is momentarily on top of the scoreboard.
3:43 PMa month ago

GOOOOOOOOOOOOOL FOR NICARAGUA! MOLDSKRED SCORES THE SECOND AND NICARAGUA WINS IT!
3:31 PMa month ago

GOOOOOOOL FOR NICARAGUA! BONILLA SCORES THE EQUALIZER!
3:16 PMa month ago

The match between San Vicente and Nicaragua kicks off at the Arnos Vales Stadium.
2:49 PMa month ago

In a couple of moments we will start broadcasting the match between St. Vincent vs. Nicaragua; match corresponding to the second date of the CONCACAF Nations League Group C.
2:48 PMa month ago

This was the goal that so far, keeps Nicaragua on top of Group C

These are the lineups that St. Vincent and Nicaragua send to face each other in this second date of the CONCACAF Nations League 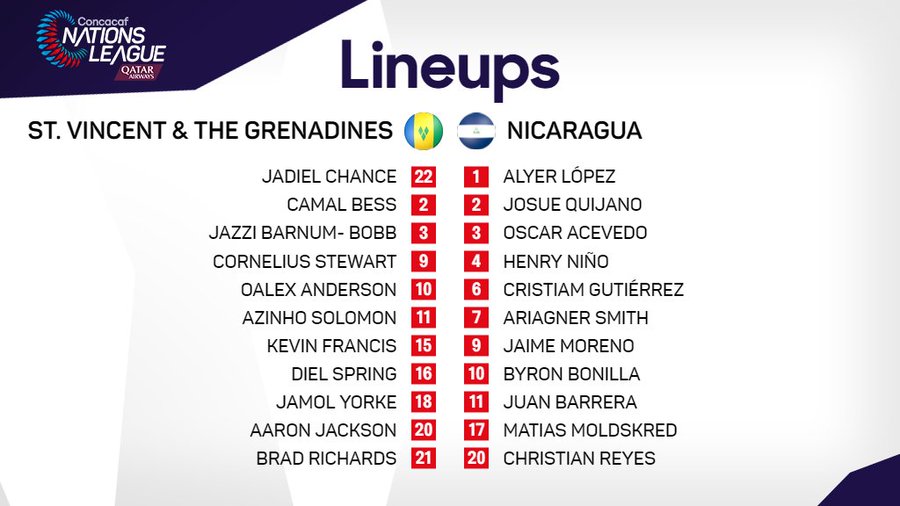 THIS IS HOW NICARAGUA ARRIVES

Nicaragua's debut was quite a show that showed everything in the 90 minutes. Five positive cases of Covid in the lead-up, a power outage that stopped the match in the 68th minute, the departures of Acevedo and Barrera due to injury and an incessant rain that gave epic goals by Josué Quijano and mainly Byron Bonilla, the star player.
2:25 PMa month ago

The St. Vincent squad was without its helmsman, Kendale Mercury, in the 1-0 loss to the Bahamas because he contracted Covid-19. Also absent were Yorke, Anderson, Spring and Solomon, all of whom were reserved to face Nicaragua on the second matchday. However, although they created several chances in the first half, they paid dearly for their defensive errors. Mercury assured that against Nicaragua "they will fight tooth and nail" since his opponent, he believes, "will finish first in the group".
2:13 PMa month ago

St. Vincent's national team got off on the wrong foot in the continental competition with a 1-0 loss to Bahamas. On the other hand, the Nicaragua team managed to start their adventure in the competition in the best way and defeated Trinidad and Tobago 2-1 on the opening day.
2:05 PMa month ago

In Group C, Nicaragua leads with three points, followed by the Bahamas with three points in second place, in third place is Trinidad and Tobago, which surprisingly lost in its debut, and in last place is St. Vincent.
2:01 PMa month ago

The wait is over, CONCACAF Nations League action continues with the duel between St. Vincent and Nicaragua. At the moment in Group C Nicaragua is leading the group and St. Vincent arrives to this match at the bottom of the group, so they will be looking to get their first three points, on the other side, Nicaragua will be looking to secure the leadership of the group.
6:10 PMa month ago

Do not miss a detail of the match with the live updates and commentaries of VAVEL. Follow along with us all the details, commentaries, analysis and lineups for this St Vicent vs Nicaragua match.
6:05 PMa month ago

What time is St Vicent vs Nicaragua match for CONCACAF Nations League 2022?

This is the start time of the game St Vicent vs Nicaragua of 6th June in several countries:

Watch out for this player from Nicaragua:

For this match, Francis Flores will be the player to watch throughout the 90 minutes for the Nicaragua national team. The center forward will look to make the difference in Nicaragua's attack and give them the victory with the dangerous options he can generate throughout this match.
5:55 PMa month ago

Watch out for this player from San Vicente:

For this match, Jamal Yorke will be the player to watch for St. Vincent. The midfielder of the St. Vincent team should generate danger throughout these 90 minutes and will have the obligation to hurt the opposing team with passes between lines and try to send the ball into the net. 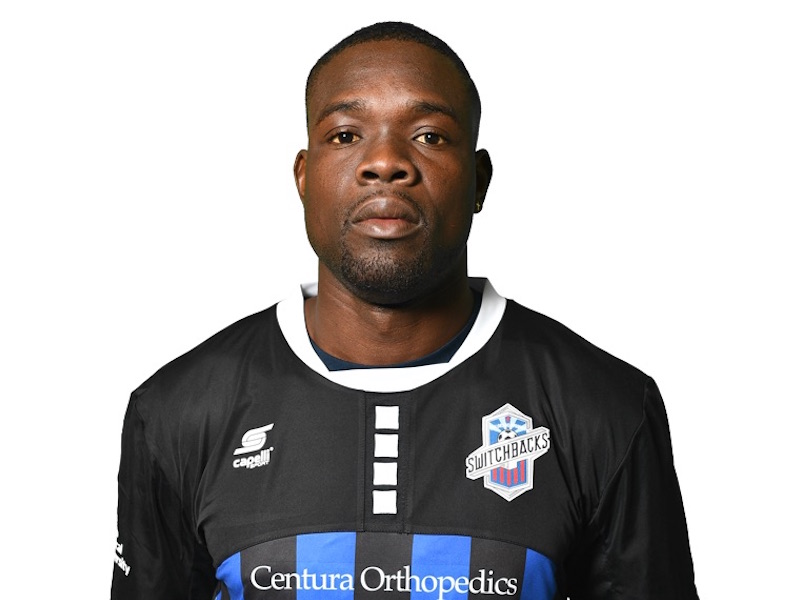 Arnos Vale Stadium is a multi-purpose stadium located in Kingstown, the capital of St. Vincent and the Grenadines. It is a multi-sport venue for a variety of sports including soccer and cricket. The stadium hosted its first international match on February 4, 1981. The match hosted a match between the West Indies and England in a close encounter that the hosts won by two runs. It is home to the Windward Islands national team. Its inaugural Test match came in 1997, when the West Indies played Sri Lanka to a draw.
5:30 PMa month ago

They continue to raise expectations

The Nicaragua team has not played so many matches so far in 2022 because their respective matches against Guatemala and Belize were cancelled at the beginning of the year, and the only two preparation matches they played were against Belize with a victory where Nicaragua liked, won and scored 4-0 against Belize and the most recent one where they tied by the minimum difference against the same rival. Now they will look to continue to grow against St. Vincent and begin to shine in the CONCACAF area.
5:25 PMa month ago

The national team of St. Vincent will be looking for points in this start of the group stage of the CONCACAF Nations League, St. Vincent has not known victory since March 30, 2021 when they defeated the British Virgin Islands by a resounding score of 3-0, since that day, they have dragged a long streak of defeats against Guatemala by a scandalous score of 10-0, In their last 5 games they have conceded 22 goals against and scored only 3 goals in favor, so they should take advantage of this official competition to continue growing as a national team and gradually become important in CONCACAF.
5:20 PMa month ago

The competitions of the national leagues are over and with it the 2021-2022 season, however, the summer season begins where the nations dispute the last tournament of nations before Qatar 2022 begins. In North America, the UEFA Nations League begins the dispute where they will seek to find again the country that proves to be the best throughout the territory. In this match, St. Vincent will seek to continue its path in this edition and Nicaragua, on the other hand, to start making a difference in the CONCACAF zone.
5:15 PMa month ago

The St Vicent vs Nicaragua match will be played at Arnos Vale Stadium, in St Vicent, St Vicent. The kick-off is scheduled at 14:00 pm ET.
5:10 PMa month ago