Thank you very much for joining us for the UEFA Nations League 2022 Greece vs Cyprus match. Follow the sports information on VAVEL.com.
4:38 PMa month ago

Corner for Greece.
4:28 PMa month ago

Corner for Cyprus.
4:21 PMa month ago

Konstntinos Laifis (Cyprus) header from the center of the box is saved in the bottom left corner.
4:12 PMa month ago

In: Marinos Tzionis and Nikolas Panagiotou

Out: Loizos Loizou and Nicolas Ioannou

Offside of Greece.
4:04 PMa month ago

Anastasios Bakasetas (Greece) left footed shot from the center of the box is saved in the bottom left corner.
4:03 PMa month ago

GOOOOOOOL FOR GREECE, just at the start of the second half, Dimitris Limnios strikes a right-footed mid-range shot into the top right corner to seal the win in Volos.
3:53 PMa month ago

In: Dimitris Christofi and Konstantinos Laifis

Loizos Loizou (Cyprus) left footed shot from the left side of the goal is saved in the hands of the goalkeeper.
3:29 PMa month ago

Ioannis Pittas (Cyprus) right footed shot from the center of the box is saved in the bottom right corner.
3:24 PMa month ago

Corner for Greece.
3:19 PMa month ago

Corner for Cyprus.
3:13 PMa month ago

Corner for Greece.
3:10 PMa month ago

GOOOOOOOOOOL FOR GREECE, only 12 minutes were enough for Vangelis Pavlidis to shoot a right-footed shot into the right side of the goal to give the Greeks their second goal.
2:58 PMa month ago

GOOOOOOOOOOL FOR GREECE, Anastasios Bakasetas strikes a left-footed shot from outside the area straight into the right side of the goal to open the scoring for the Greeks.
2:55 PMa month ago

The teams take the field to begin the ceremonial acts.
2:41 PMa month ago

Both teams are in the stadium warming up for the match.
2:35 PMa month ago

Group C is made up of Cyprus, Kosovo, Northern Ireland and Greece.
2:33 PMa month ago

The current group leader is Greece and Cyprus is last, so Greece will most likely be the winner.
2:31 PMa month ago

The assigned referee for this match is Tamás Bognar.
2:12 PMa month ago

In 45 minutes the match will start at Panthessaliko Stadium. Both teams have already confirmed their line-ups.
12:42 AMa month ago

In a few moments we will share with you the starting lineups for the Greece vs Cyprus match, as well as the latest information from the Panthessaliko Stadium. Don't miss a single detail of the match updates and commentary from VAVEL's coverage.
12:37 AMa month ago

How to watch Greece vs Cyprus Live Stream on TV and Online?

If you want to watch the Greece vs Cyprus match on TV, your option is: Star+.

If you want to watch it directly on streamig: Star+.

What time is Greece vs Cyprus match for UEFA Nations League?

This is the kickoff time for the Greece vs Cyprus match on June 9, 2022 in several countries:

The designated stadium for this match is the Panthessaliko Stadium in the city of Volos in Greece. It was built for the 2004 Athens Olympic Games in the soccer category. It is the home of Volos FC and Niki Volos clubs of the Greek Super League. It has a capacity of 22,000 spectators. 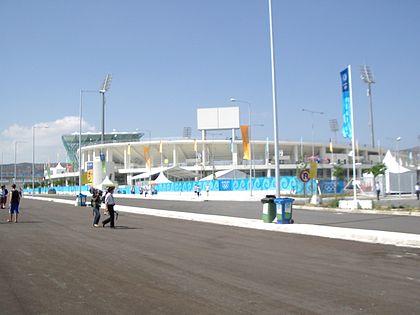 Pieros Sotiriou is a 29-year-old striker who plays for Ludogorets Razgrad in Bulgaria. With his club he scored one goal in the Europa League and with his national team, he scored four goals and made one assist in the Euro Cup.
12:17 AMa month ago

Anastasios Bakasetas is a 28-year-old striker who plays for Trabzonspor in Turkey. Between the European qualifiers and the qualifiers for the European Championship, he has three goals and two assists for his national team and in the current tournament he has already scored two more goals.
12:12 AMa month ago

Cyprus is the opposite of their opponents as they are bottom of the group with only one point. They will be looking for their first win against Greece to move up in the group but will also depend on the result between Kosovo and Northern Ireland.
12:07 AMa month ago

Greece has given a good performance in the current Nations League, as it is momentarily the leader of group C2 with six points. For now, they are undefeated and will not let go in this match against Cyprus.
12:02 AMa month ago

This tournament started in 2018 and is played every two years on FIFA international dates. Its format consists of levels, that is, there are four leagues (A, B, C and D) and each one has four groups except D which has two groups: one of four teams and another of three. These leagues are formed according to the level of their teams, with A being the highest level and D the lowest. The winners of categories B, C and D are promoted to the next edition and those who lose in each category are relegated. In total, there are 55 selections.
11:57 PMa month ago

My name is Sofia Arevalo and I will be your host for this match. We will bring you the pre-match analysis, score updates and live news here on VAVEL.