Thank you for following our coverage of Houston Dynamo vs Atlético San Luis; match corresponding to the Charities Cup 2022.
10:37 PM20 days ago

Match ends at PNC Stadium, Houston Dynamo wins the Charities Cup and comes away with the victory over Atlético de San Luis.

ANDRES INIESTRA! The Mexican came close to tying things up but the goalkeeper made a great save!
9:50 PM20 days ago

GOOOOOOOL FOR THE HOUSTON DYNAMO! THE MLS TEAM TAKES THE LEAD ON THE SCOREBOARD!
9:33 PM20 days ago

Abel Hernandez's shot on goal is kicked out for a goal kick!
9:05 PM20 days ago

THIS IS HOW THE GAME IS BEING PLAYED

This is how the game is being played against San Luis

Fernando León makes an extraordinary cover and moves the danger away!
8:56 PM20 days ago

The match between Houston Dynamo and Atlético de San Luis for the Charitie Cup kicks off.
8:18 PM20 days ago

In a couple of minutes we will start with the live broadcast of the Houston Dynamo vs Atlético San Luis, a friendly match corresponding to the Charities Cup.
8:17 PM20 days ago

Houston Dynamo FC and the Houston Dash will host a special edition of The SIX series focused on allyship in the context of Pride and the LGBTQIA+ community. The SIX is an online roundtable featuring six people with different perspectives on a particularly relevant topic.
8:14 PM20 days ago

This is the Houston Dynamo's starting eleven to face Atlético de San Luis in the Charities Cup. 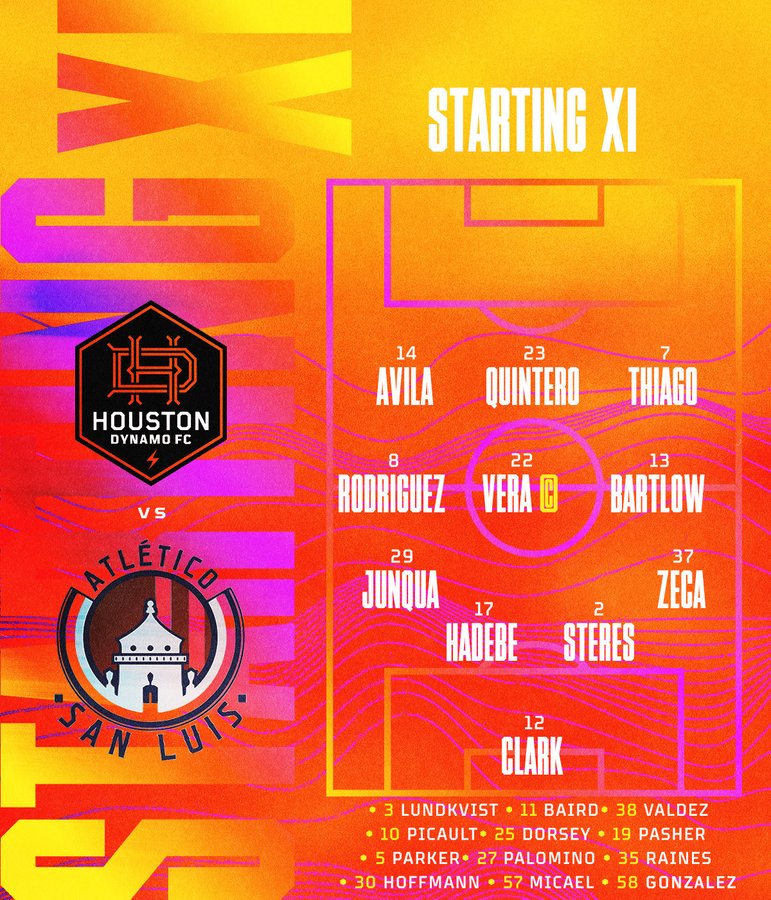 A MEXICAN TO THE HOUSTON DYNAMO

Héctor Herrera is already with the Houston Dynamo and was officially announced as the star reinforcement to try to help the team win the championship this year, the club announced his possible debut on July 9 when they face Dallas in the state derby.
7:58 PM20 days ago

Yesterday, Atletico San Luis made official the renewal and definitive purchase of Uruguayan Facundo Waller for the next three years. With this announcement, Facundo Waller is completely detached from Club Plaza Colonia de Deportes.
7:53 PM20 days ago

PART OF THE PRESEASON

This match will be part of Atletico de San Luis' preseason as they continue to prepare for the start of the 2022-23 season in Liga MX and their quest for the championship in this Apertura 2022.
7:35 PM20 days ago

NOT LOSING THEIR RHYTHM

The Houston Dynamo will have this duel which in turn will serve to not lose the rhythm they have in the current MLS season where they are seventh in the overall table of the Western Conference and will seek to remain within the top of the Play-Offs to avoid problems at the end of the season.
7:34 PM20 days ago

The wait is over for Houston Dynamo and Atletico de San Luis, both teams will play this friendly match to raise money for charity as part of the annual activity of the Houston Dynamo team. Likewise, this duel will serve so that both teams do not lose their rhythm and, being a friendly, have the freedom and patience to analyze every detail carefully.
2:52 PM21 days ago

Do not miss a detail of the match with the live updates and commentaries of VAVEL. Follow along with us all the details, commentaries, analysis and lineups for this Houston Dynamo vs Atletico San Luis match.
2:47 PM21 days ago

What time is Houston Dynamo vs Atletico San Luis match for Friendly Match?

This is the start time of the game Houston Dynamo vs Atletico San Luis of 11th June in several countries:

WATCH OUT FOR THIS HOUSTON DYNAMO PLAYER

Goalkeeper Michael Nelson will be the player to watch for this match, as he is currently shining spectacularly and has been breaking the bank, so he will be in charge of protecting the Houston Dynamo throughout these 90 minutes.
2:37 PM21 days ago

WATCH OUT FOR THIS PLAYER FROM SAN LUIS

For this match, the player to watch will be Rubens Sambueza, the great center midfielder with a great career in Liga MX has become a reference so the Houston Dynamo defenders will have to watch out for him. 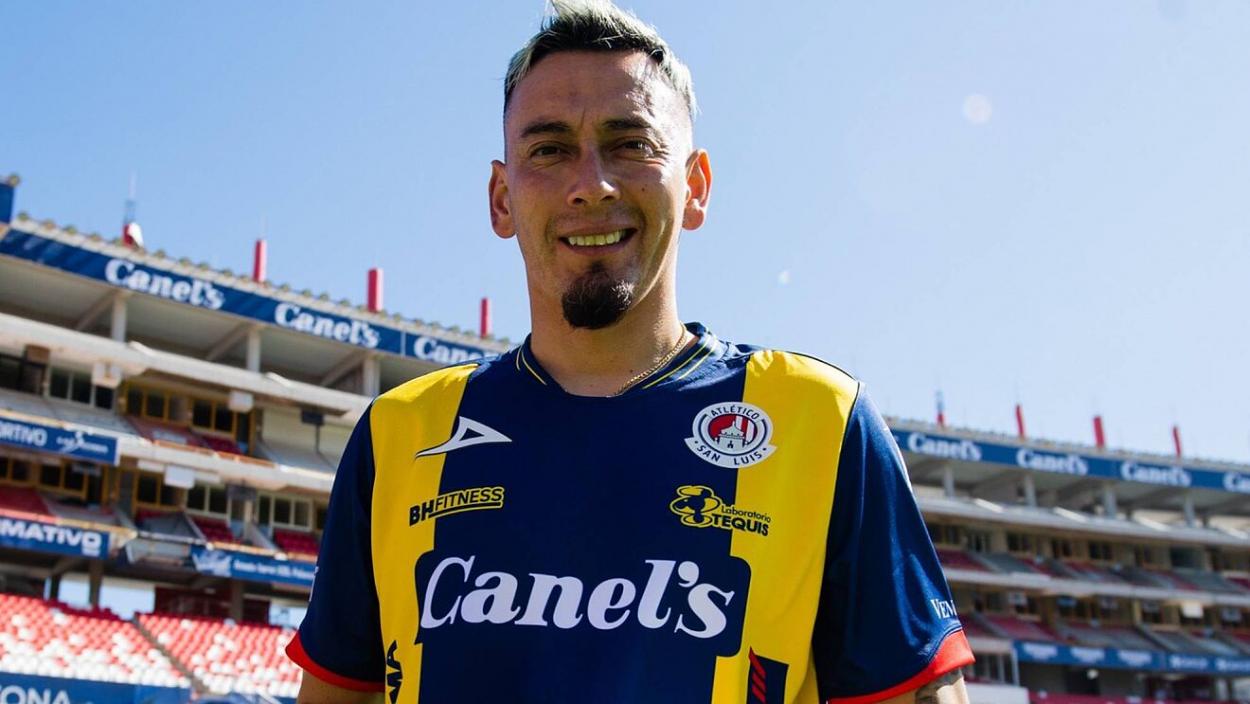 THE WORDS BEFORE THE MEETING

"We are thrilled to announce the return of the Dynamo Charities Cup for this season and look forward to measuring our first team against San Luis, a quality Liga MX opponent," said Houston Dynamo General Manager Pat Onstad. "One of our sporting priorities is to enhance our relationships with the Mexican soccer community, specifically the FMF, Liga MX and the top Mexican clubs.
2:17 PM21 days ago

PNC Stadium, formerly BBVA Compass Stadium and then BBVA Stadium, is a multi-purpose stadium located in the city of Houston, Texas in the United States. It is home to the Houston Dynamo of Major League Soccer and the Houston Dash of the National Women's Soccer League. The stadium was inaugurated on May 12, 2012 and has a capacity of 22,039 spectators.
In early October it was announced that the Guyana Football Federation had sold the rights to the Guyana national team's 2014 World Cup qualifier against Mexico as a home game to a promoter, bringing the match to PCN Stadium, then called BBVA Compass Stadium, in Houston. This match will be the first qualifying match to be played in this stadium.
2:12 PM21 days ago

TO CONTINUE THE PREPARATION

Atletico de San Luis will look to take this match as part of its preseason to continue reinforcing itself and arrive in the best possible way to the start of the Apertura 2022 Tournament, as it should be remembered that Atletico de San Luis had a passable tournament that allowed it to fight one on one with Pachuca in the last Quarterfinals and came within a hair's breadth of eliminating the general leader.
2:07 PM21 days ago

The Houston Dynamo will have this match against the team from Potosi to raise funds for charity and to keep up their pace in MLS. In the MLS Western Conference they are currently in seventh place in the standings, their last win was a convincing 3-0 win over LA Galaxy and in their last two games they suffered two losses, the toughest being against Sporting Kansas City as they were eliminated from the Cup. Houston Dynamo is generally a strong opponent at home and will be looking to win this friendly match to give their fans some joy.
2:02 PM21 days ago

The Houston Dynamo vs Atletico San Luis match will be played at PNC Stadium, in Houston, Texas. The kick-off is scheduled at 20:30 pm ET.
1:57 PM21 days ago