The match ended with the first victory for the flock in this preseason, with a good performance by Macías, who scored a brace to revive his career as the flock's top scorer. 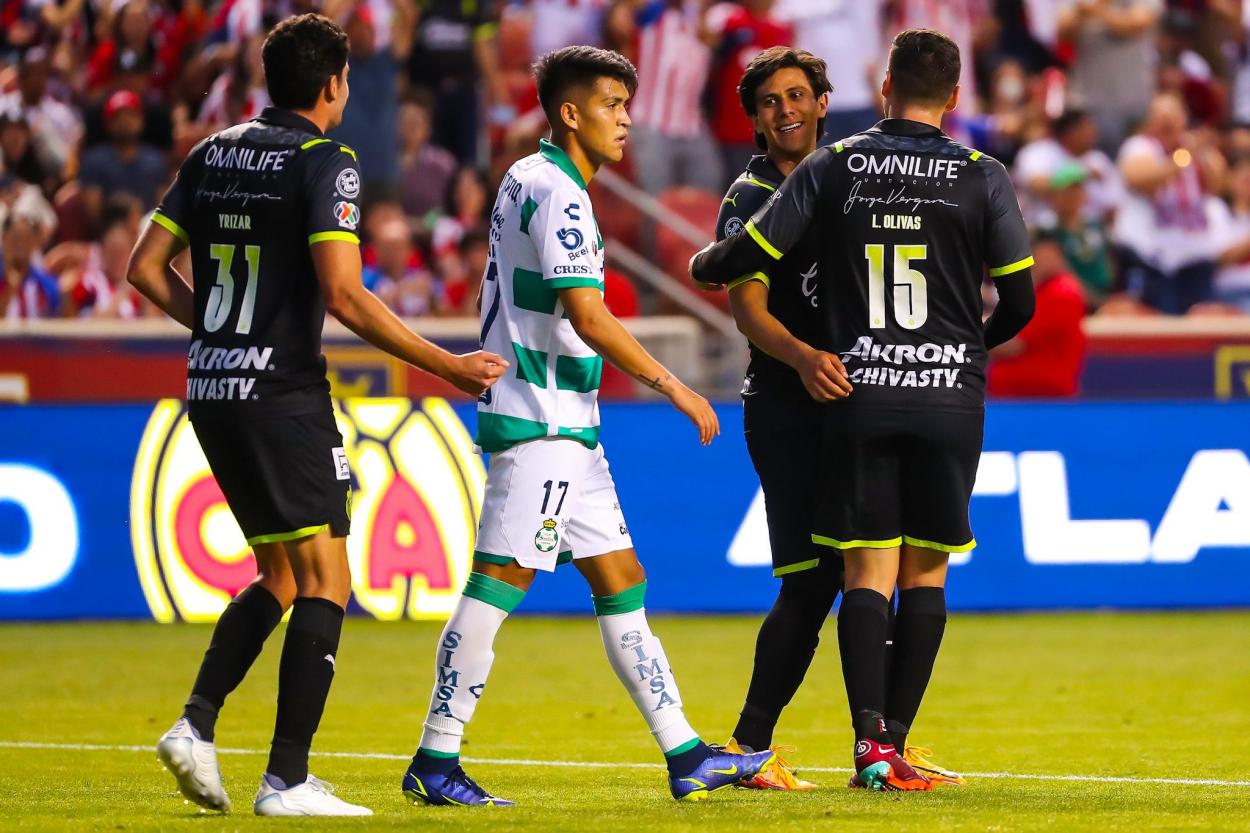 We are minutes away from the end of the match, with a great performance by Chivas, being more protagonist, Santos came to the ground, after Macías' penalty.
11:22 PM20 days ago

Macías' second goal, which made it three to one.

Macías' penalty goal, which made it two to one.

Goal!
Double by Macías, Chivas makes it three to one, José Juan takes advantage of Yrizar's pass, after a series of rebounds in the box.
11:11 PM20 days ago

Penalty!
The referee awards a penalty kick to Chivas.

Suarez was looking for the angle, but Jimenez makes the effort, but the ball goes wide.
10:58 PM20 days ago

Goal! Captain Dória headed the ball from a set piece and the goalkeeper Jiménez was unable to stop the ball.
10:46 PM20 days ago 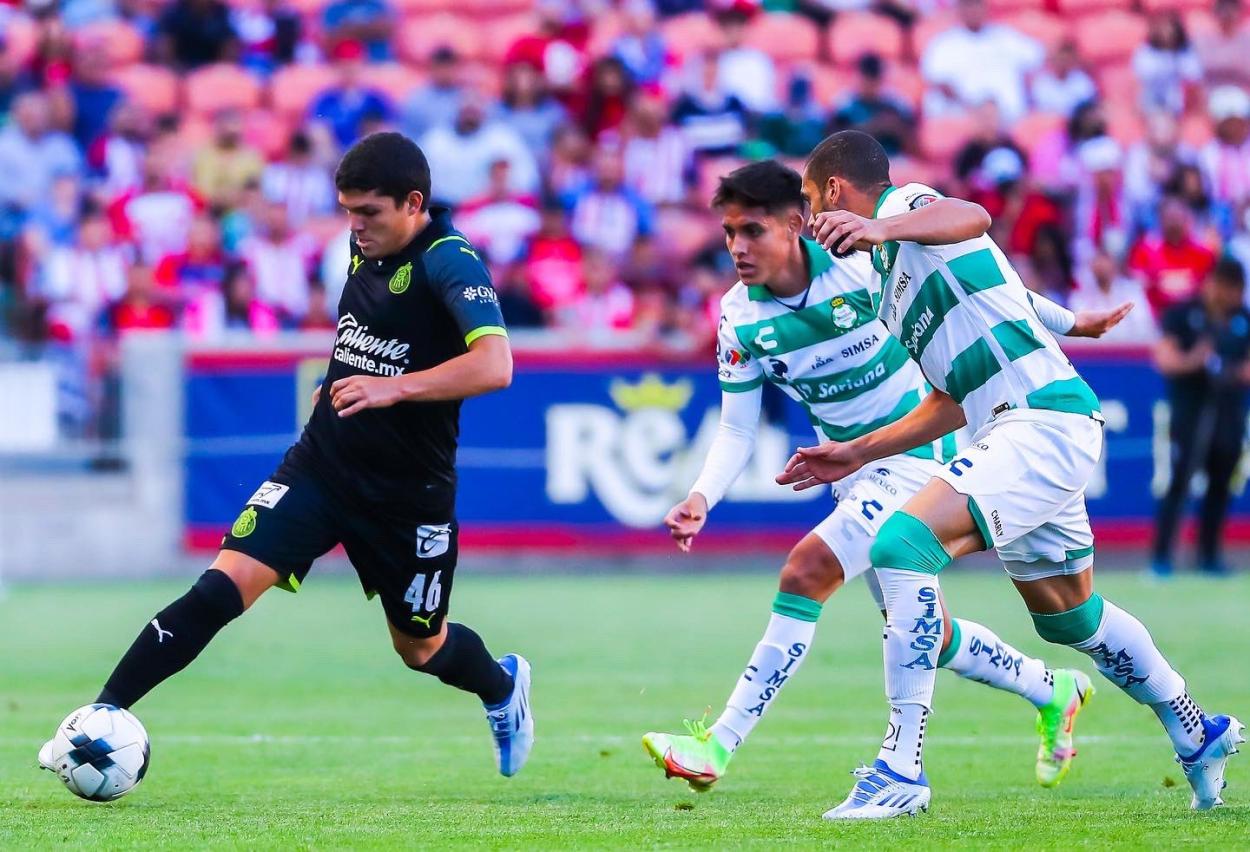 Chivas are leading at the moment, one-nil, with Briseño's goal. In addition, el Pollo went off injured, giving way to Tiba. 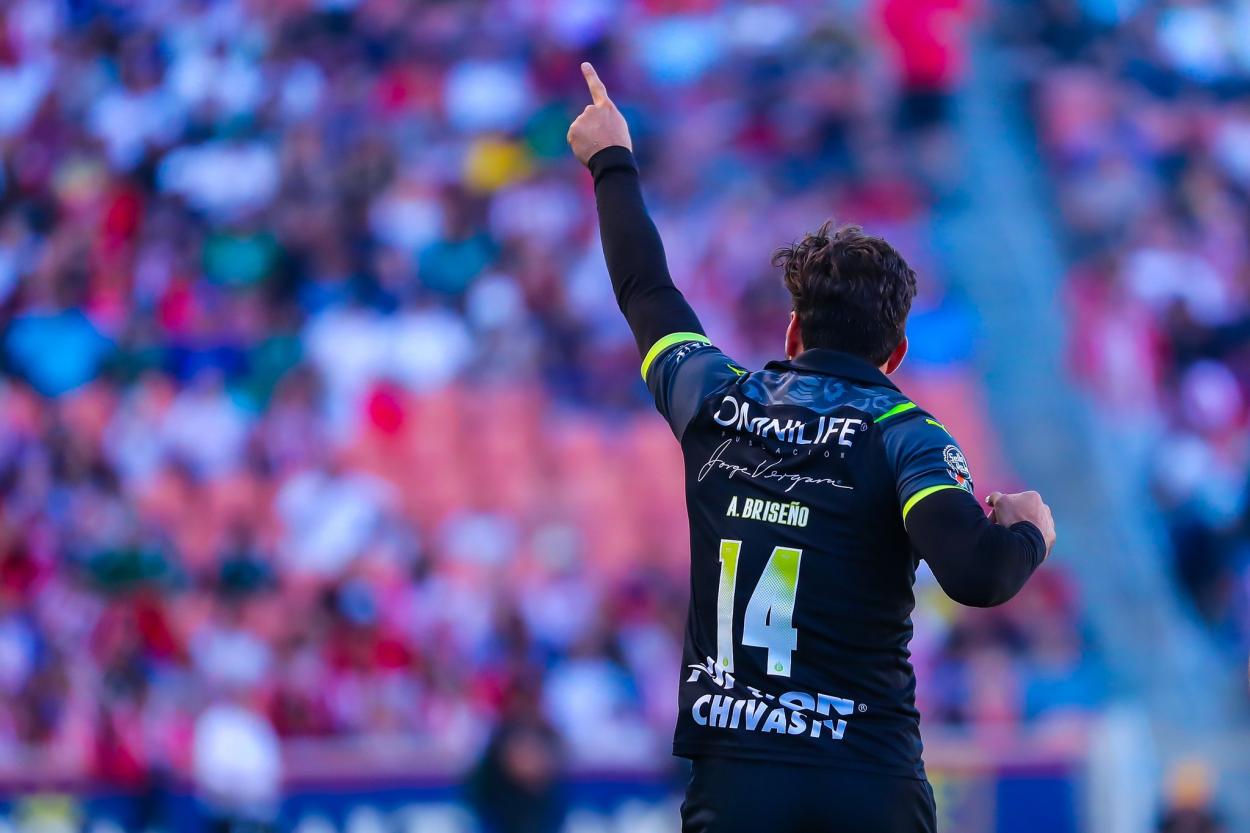 One more minute has been added, not much time has been wasted, the highlight, Briseño's goal.
10:21 PM20 days ago

The alarms go off, Briseño leaves due to muscular discomfort, giving way to Sepúlveda. He is the scorer of the match at the moment. 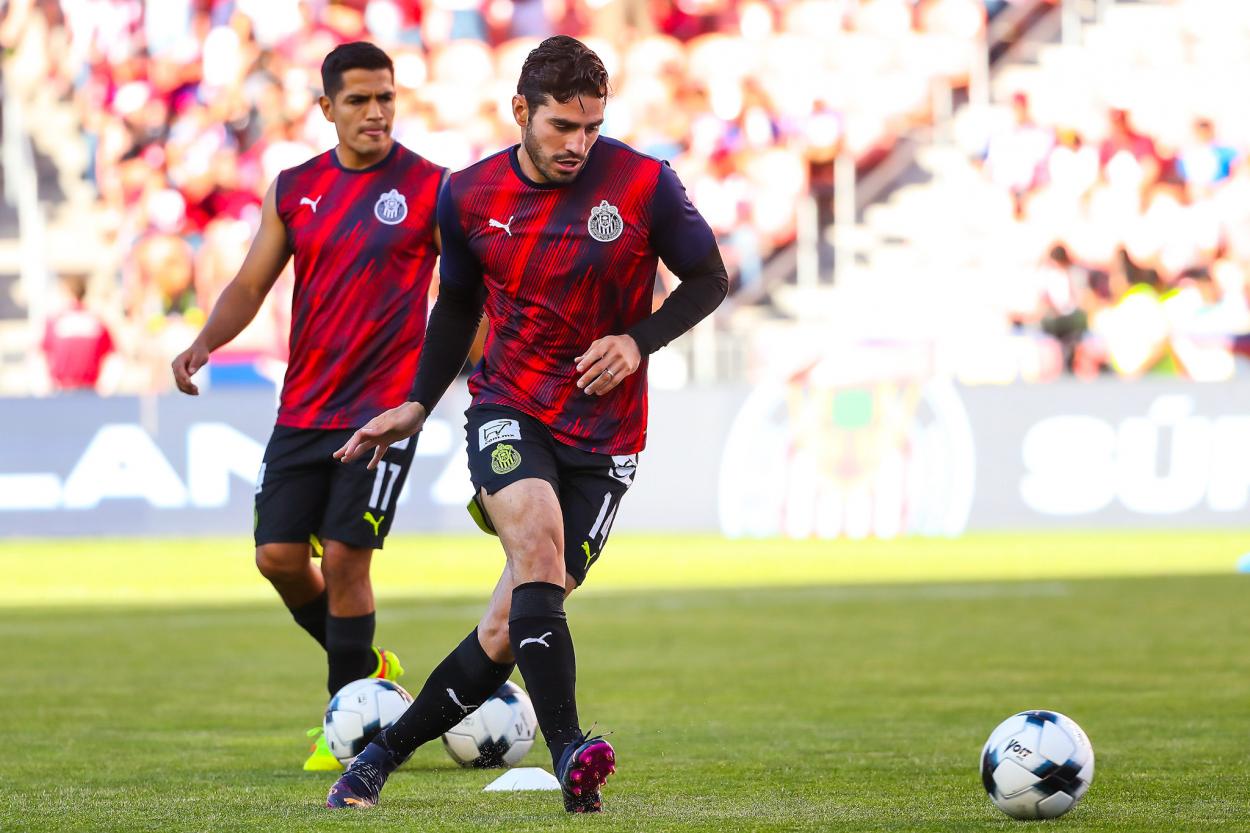 This was the goal scored by 'Pollo' Briseño, which opened the game.

A counter-attack by the herd, led by Sandoval, ended in a cross, but to no avail for Chivas.
10:10 PM20 days ago

Zaldívar's shot, which brought Chivas closer to scoring the second, went just wide of the post.
10:08 PM20 days ago

Goal!
Briseño scores the first goal of the afternoon, on a set piece, with a header.

Free kick for the Laguneros, Lozano sends it over Rangel's goal.
9:57 PM20 days ago

Chivas has tried to dominate the first 20 minutes of the game, with the most dangerous plays coming from free kicks.
9:44 PM20 days ago

Zaldivar missed it, they asked for a penalty, but the referee said there was nothing.
9:38 PM20 days ago

The ball is rolling at Rio Tinto Stadium. 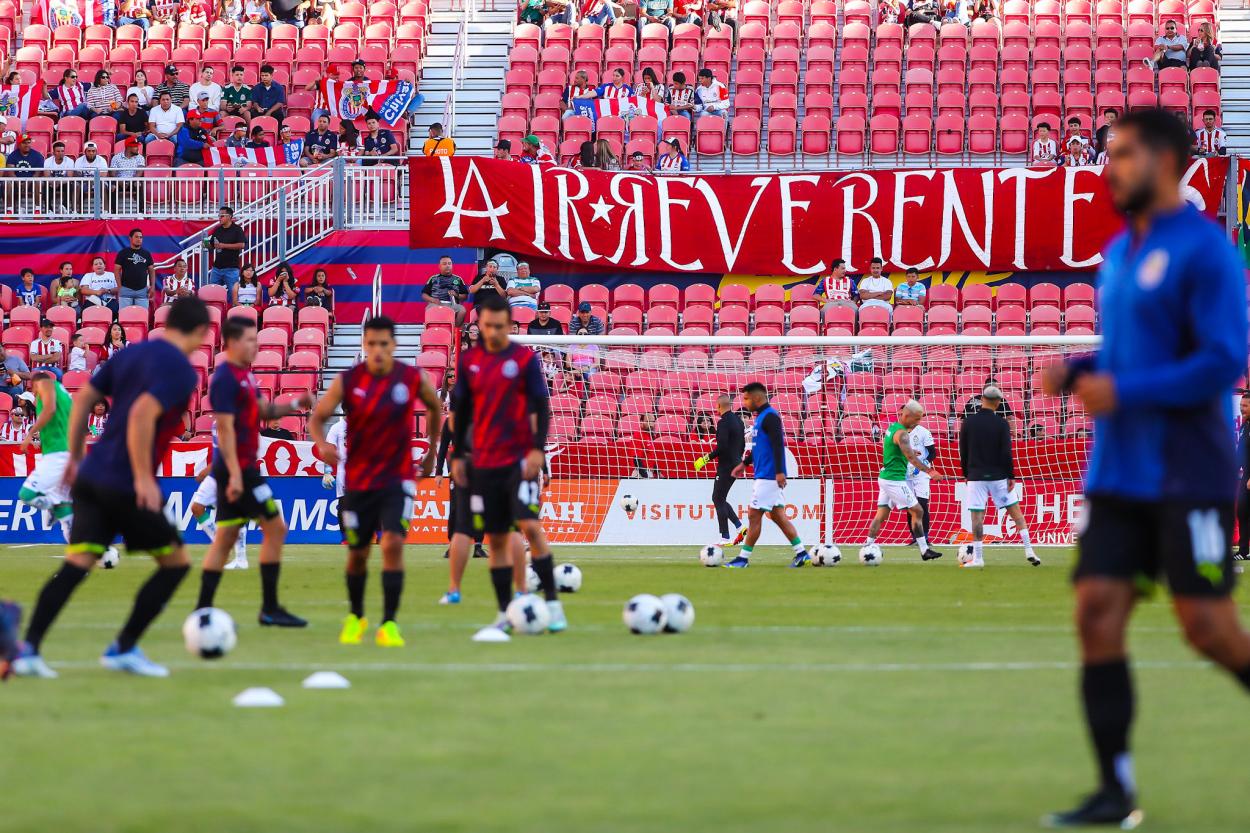 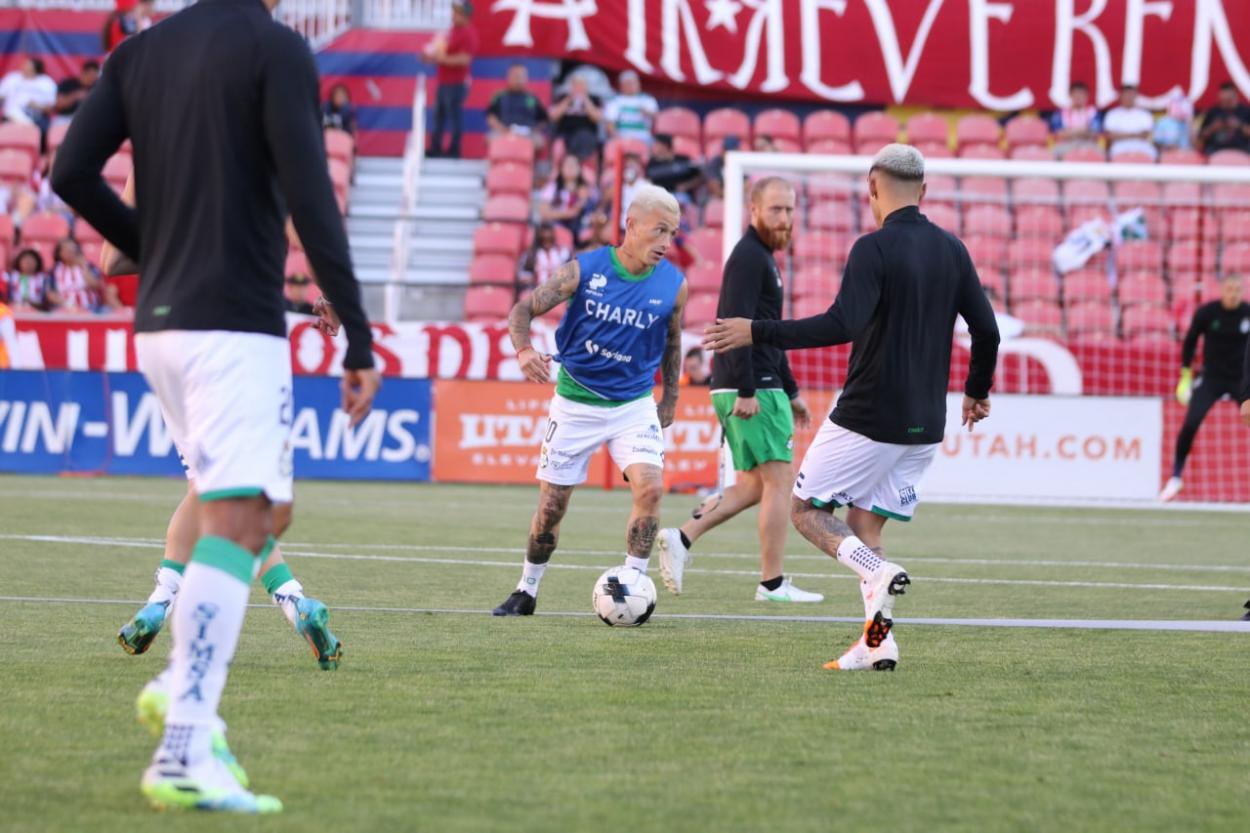 In the 2014 Apertura Cup match, Santos Laguna beat Chivas by a score of five to zero. On the other hand, in the Clausura 2010, the rebaño gave a great exhibition, winning by a score of six to two.

These two scores have been the most scandalous in the history between these two teams.

They go all out

The Guerreros arrived on Monday night in Salt Lake City, holding training sessions in order to arrive in the best possible shape for the match against Chivas. Ronaldo Prieto considers that, in this match against the herd, they only have this duel against Guadalajara in mind and they arrive in a better moment than the rival.

"We are going to arrive very well, because we already played our first match, the team looked very good, now we have to confirm what we did against Mineros".

Starting off on the right foot

The Ricardo Cadena era begins on the rebaño's bench, with three matches on American soil, the first being this game against Santos, followed by a trip to Chicago on June 18 to face Atlas and closing with a match of international stature. Chivas will host Juventus in Las Vegas on July 22.

The two teams are already at the Rio Tinto Stadium, just minutes away from warming up, after which the action will begin. In addition, we have several surprises in the line-ups.
8:42 PM21 days ago

The history between these two team’s dates back to the winter of 1996, but there have been 31 meetings between Chivas and Santos. The Laguneros have dominated, winning 17 games, with the Flock winning 5 and the Herd winning 9 and drawing 9.

We are just minutes away from the start of this game between Chivas vs Santos Laguna at the Rio Tinto Stadium for a friendly match prior to the start of the tournament, where the American fans are expected to be in attendance.
8:32 PM21 days ago

We're back for the minute-by-minute coverage of Chivas vs Santos Laguna. We will shortly share with you the confirmed lineups, as well as relevant facts about the clash between these two teams.
12:50 AM21 days ago

Tune in here Santos Laguna vs Chivas in the Friendly match

In a few moments we will share with you the starting lineups for Santos Laguna vs Chivas live, as well as the latest information from the Rio Tinto Stadium, including statements from the players and some interesting facts about this great match between these two great national team powers.

If you want to watch the game Santos Laguna vs Chivas live on TV, your options is: ESPN Deportes+ and ESPN Deportes.

What time is Santos Laguna vs Chivas match for the Friendly match?

This is the start time of the game Santos Laguna vs Chivas of June 15th 2022 in several countries:

This was the last eleven that Ricardo Cadena presented in the friendly against Colima.

This was the last eleven presented by Professor Eduardo Fentanes, in the friendly against Mineros.

Alexis Vega, the number ten of the herd, will be the player to watch for this game, he had the red and white fans worried about a possible departure, because he had not renewed, but Vega will continue for a few more years for Chivas. In the last campaign, in 14 games, he scored 5 goals and provided 4 assists.
12:20 AM21 days ago

Watch out for this Santos Laguna player

Eduardo Aguirre, center forward of the guerreros, in the last Clausura 21/22 tournament played in 17 games, scoring 3 goals and 1 assist. It was a not very productive season for the 'mudo' who hopes to return to the goal scoring path in this next tournament and return to the senior national team.
12:15 AM21 days ago

On the rebaño's side, Alexis Vega and Roberto Alvarado did make the trip for this tour of U.S. territory, elements that participated in the 'Tri' friendlies. Fernando Beltran stayed in the national team's training camp, prior to the game against Jamaica, and may be able to arrive for the next games.

On the injury front, Jesus Molina, Jesus Angulo and Isaac Brizuela stayed in Mexico to continue recovering from their respective injuries.

On the Warriors' side, their star player, Carlos Acevedo, is still in the national team, and after some time on vacation, he will join his teammates.

New illusion in the herd

Guadalajara has been under the spotlight in recent weeks, after the revolution that was achieved in the team and giving a new version of the game to the team. After the elimination in the Liguilla against Atlas, Chivas got to work, and new faces and other familiar ones have arrived to the team.

Alan Mozo, Fernando González and Gael Sandoval are the new additions for this tournament, Mozo and González were bought by the club and Sandoval returned from his session in European soccer, but one more element is still expected to arrive, as confirmed by their sports director Ricardo Peláez in a press conference, leaving the door open for the arrival of another element.

The players who have left the club are Gudiño, who finished his contract, and Huerta, who was transferred to Pumas.

Their preseason started in Barra de Navidad, where they had a match against Colima FC, where Chivas won four-nil.

The Lagunero club has started its preseason on the right foot, winning against Mineros de Zacatecas in its first friendly match in the run-up to the Apertura 2022. The Warriors will have a three-match tour of American territory, against Rayados, Tigres and Chivas, whose first test will be in Salt Lake City, at the Rio Tinto Stadium.

On Monday, June 13, they had a training session at the TSM and then headed to the Torreón airport for an evening landing in Salt Lake City.

So far, Club Santos has made official 3 additions, Eduardo Perez, a 29-year-old Mexican striker, who had a successful career in the Expansion League. The second arrival was Aldo Lopez, a 22-year-old midfielder, also from the Silver League. Lastly, Rivaldo Lozano, a 23-year-old Mexican right back, came from the now defunct Tampico Madero.