The Mexican national team gave a great game, winning eight to zero against Suriname, giving a good performance in the first half, in the second half due to the bad conditions of the field, it was not possible to have a clean game, many injuries were caused by this factor. 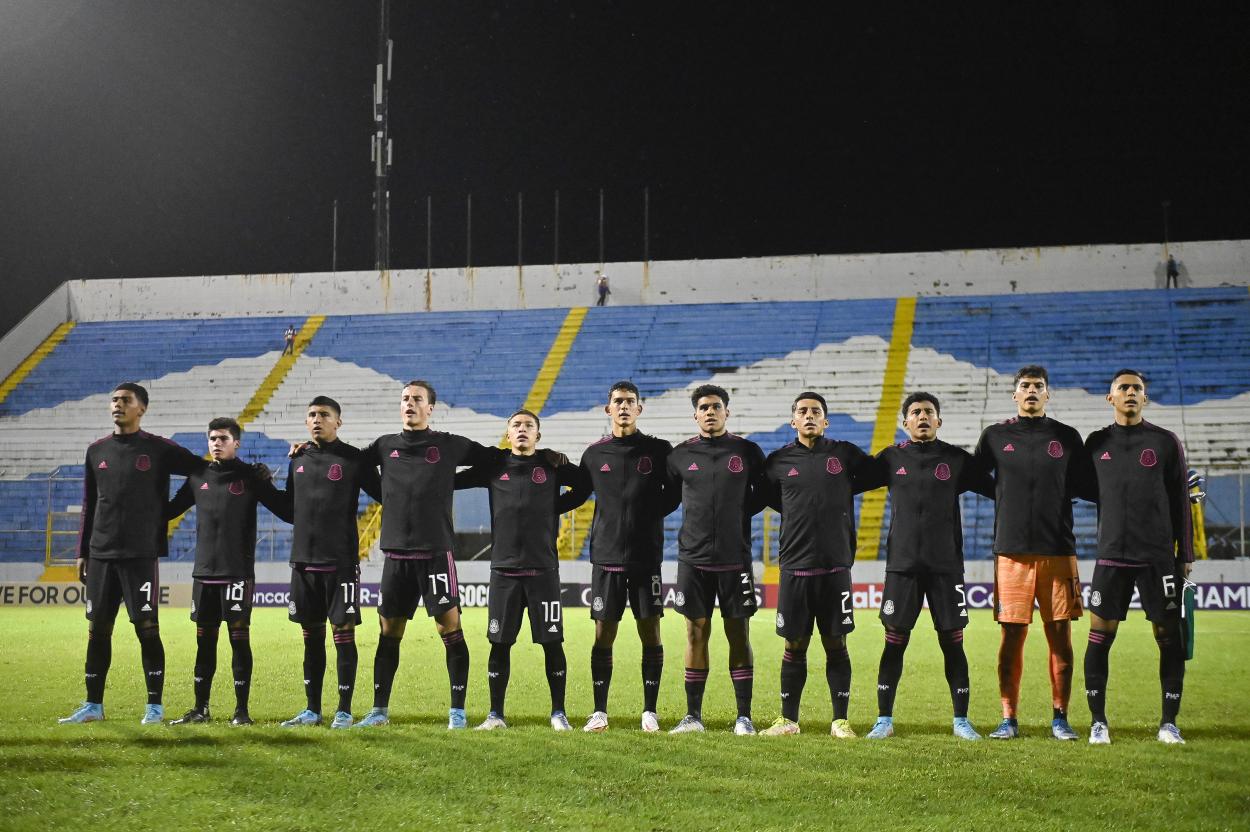 Goal!
Jesus Hernandez scores the eighth goal off a free kick.
12:25 AM16 days ago

Antonio Leone put the ball home to make it seven-nil. In a series of rebounds in the small area, he scored the seventh.
12:19 AM16 days ago

Goal!
Mariscal's third and goal number six for the Mexican team. A great header that the goalkeeper can't reach.
12:13 AM16 days ago

Torres in a one-on-one against the goalkeeper missed his shot, very soft, Gonzalez leaves and Jurado enters in his place. The Mexican team wasted a corner kick, Alcantar tried to surprise the goalkeeper with a shot over the top.
12:08 AM16 days ago

The sixth was almost there!

In the 78th minute, the first dangerous goal for the Mexican team, Gonzalez misses and misses his brace.
11:59 PM16 days ago

With the first half being a goal fair, the Suriname side recorded another cramp in their starting eleven, the pitch being a factor in this process of injuries on both sides.
11:56 PM16 days ago

At the 60th minute, the alarms went off, Karel Campos was injured after stepping on a bad foot, Diego Gomez came in. A few minutes before, the goalkeeper and the Surinam attacker were injured.
11:39 PM16 days ago

The action restarted, with 3 changes for the Mexican team, Lozano, Perez and Ambriz left. Lozano scored the first goal of the night.
Those who entered were Torres, Zamora and Hernandez. 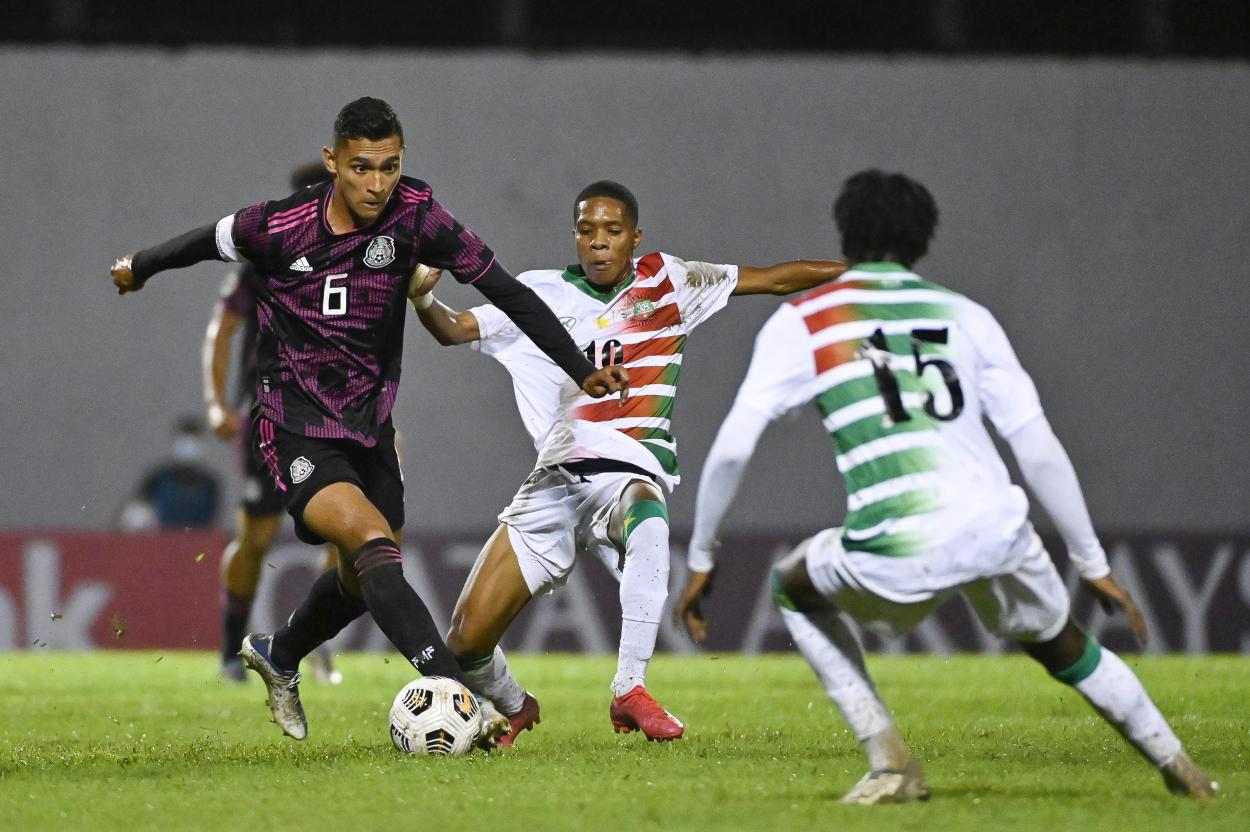 Goal!
The fifth goal arrived, Bryan Gonzalez scored a fantastic play, this way we go to the break, with the Mexican team dominating the game. 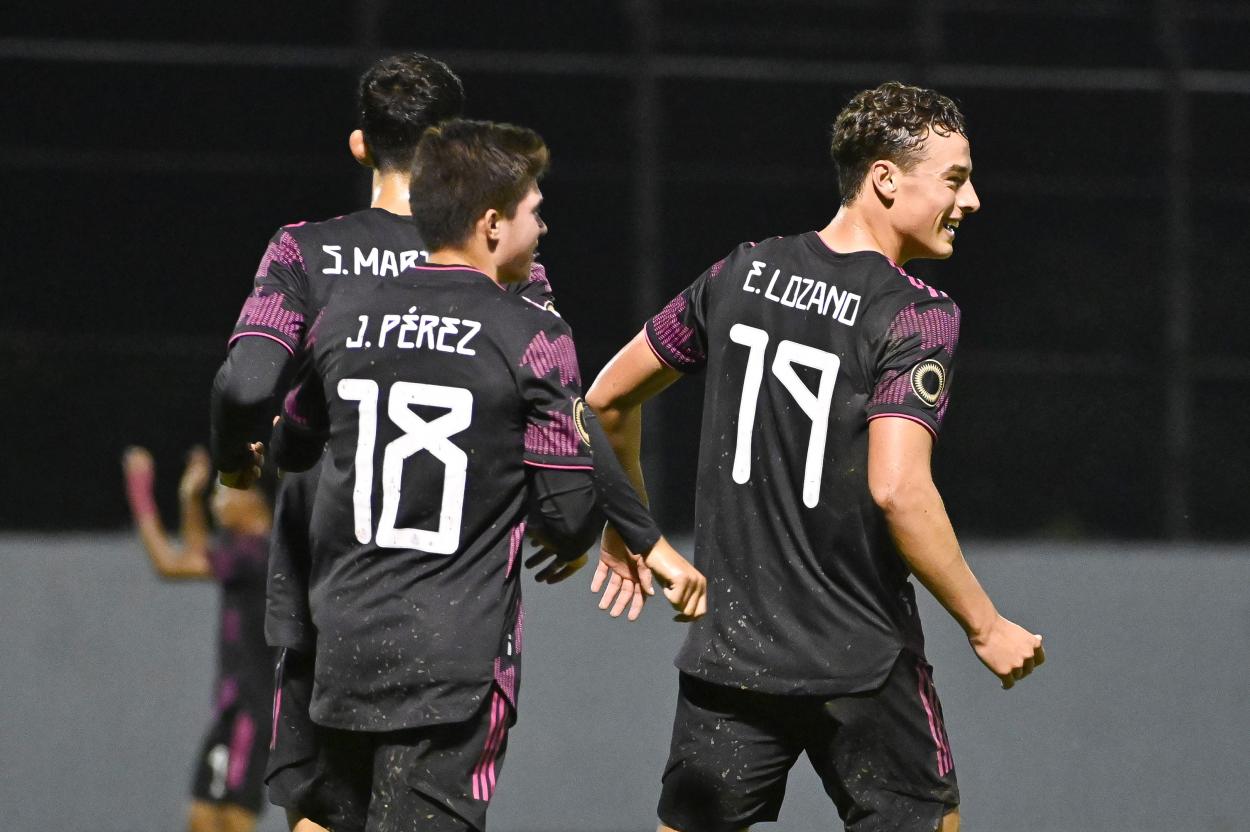 Goal!
The captain's goal came, Fidel Ambriz rose up in the air, heading the ball past the Suriname centerback.
10:59 PM16 days ago

Goal!
In a great play in collaboration with Lozano, Mariscal scores the third of the match.
10:56 PM16 days ago

The second came for the Mexican team, in a play alone against the goalkeeper, Mariscal scored his first goal in the competition.

Goal!
The first arrived, on a rebound given by the goalkeeper from Campos' shot, Lozano pushed the ball in, scoring the first of the night.
10:40 PM16 days ago

Suriname's first, Jayen Gerold took a shot from outside the box, but his shot went wide.
10:38 PM16 days ago

The Mexican national team has become more intense in attack in these first 5 minutes of play, with 3 corner kicks on the Mexican side, Fidel Ambriz came close to scoring with a header, but the rival defense cleared it near the goal line.
10:32 PM16 days ago

The ball is in play at the Francisco Morazán Stadium.
10:14 PM16 days ago

The referee for this match will be Reon Radix from Granada.
10:12 PM16 days ago 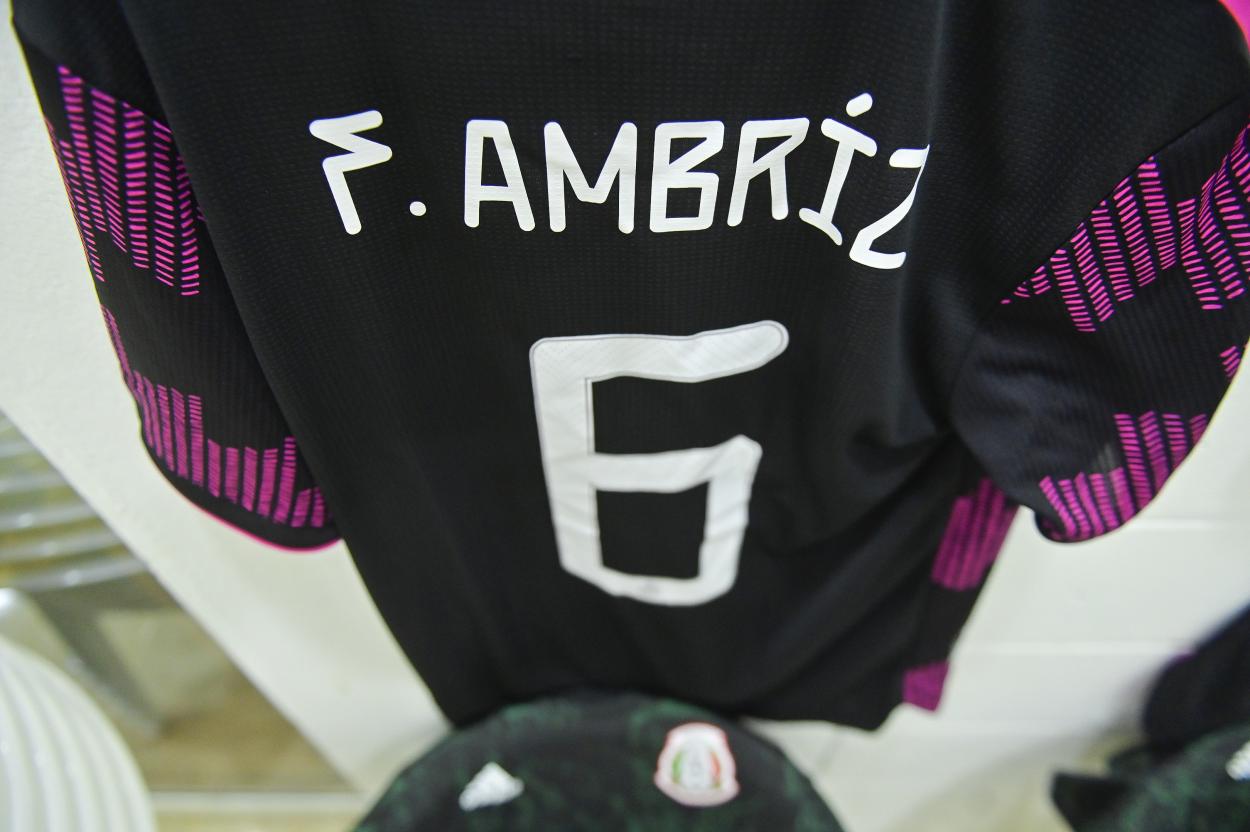 He is confident in his team

A few weeks ago, Luis Perez spoke a few weeks before giving this final call for this competition, in a press conference he highlighted the following:

"There is a lot of talent in the team, with a lot of desire to have a great tournament, to be protagonists, to obtain the passes that we will get for the U20 World Cup and the Olympics in Paris".

On the group of players, he has commanded in this process:

"I see a very committed team, I see a very important human part, they are great professionals, we will try to make the team go first, individually each of the players have a great capacity". 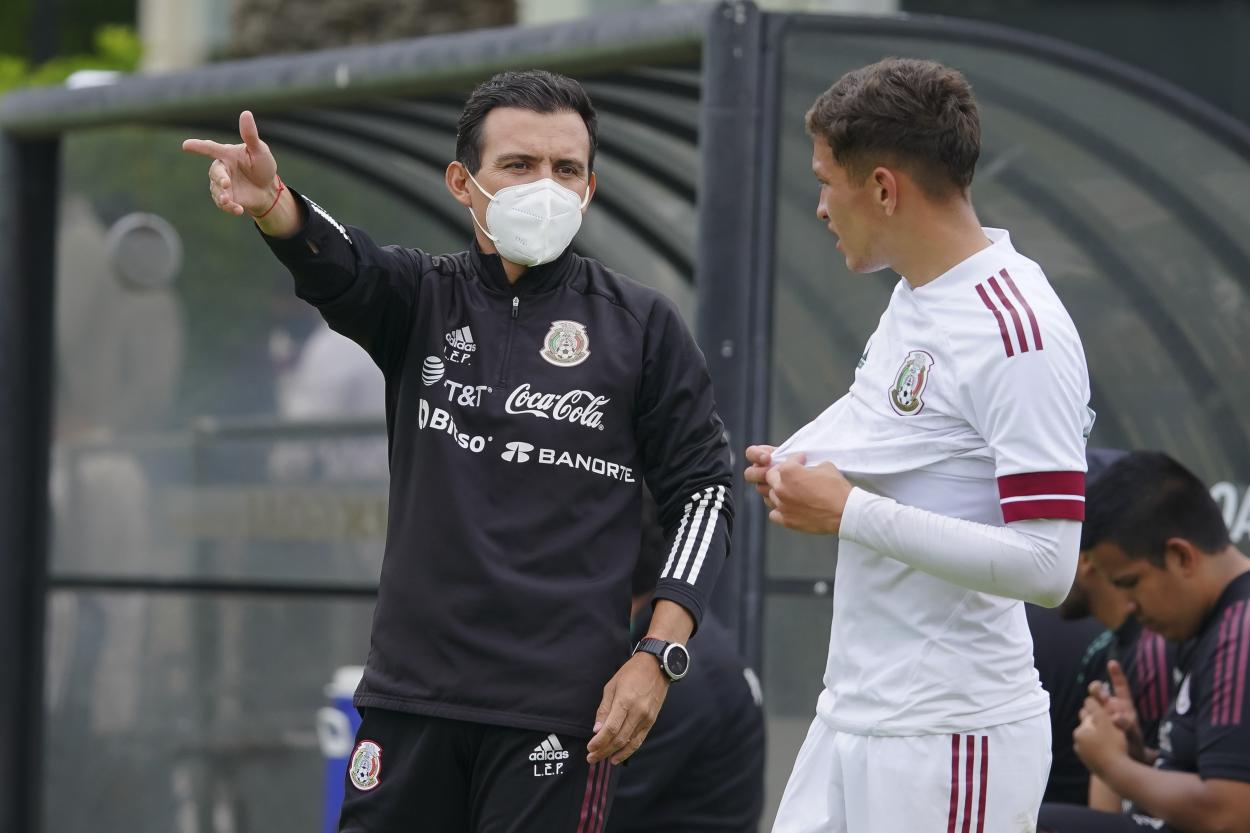 The Mexican national team had different friendlies prior to this tournament, to prepare, to see the players and the coaching staff, where the 'tri' was protagonist against 2 teams of the Expansion League and a selection, against Atlante they tied, with Coyotes they won, in the two times they faced El Salvador, they won. 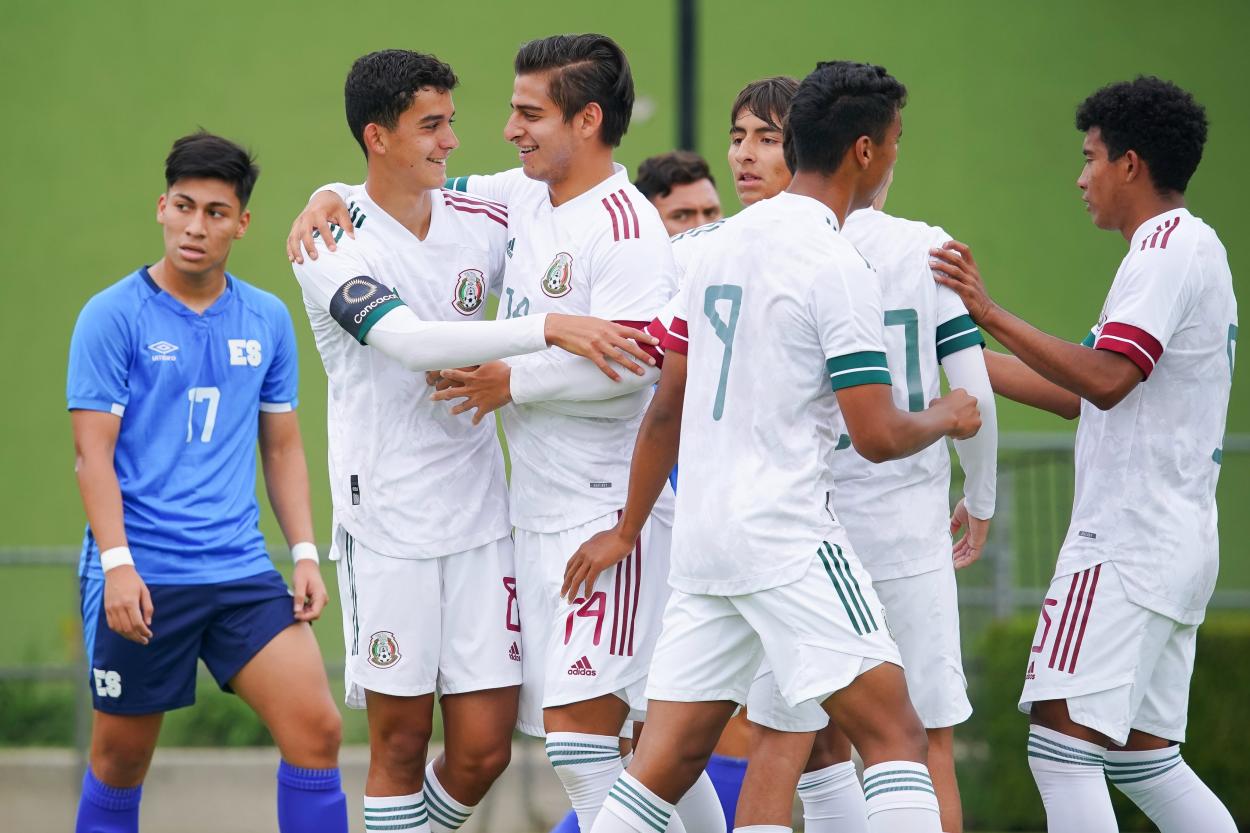 The two teams are already at the Francisco Morazán Stadium, just minutes away from warming up, after which the actions will begin. In addition, we have several surprises in the lineups. 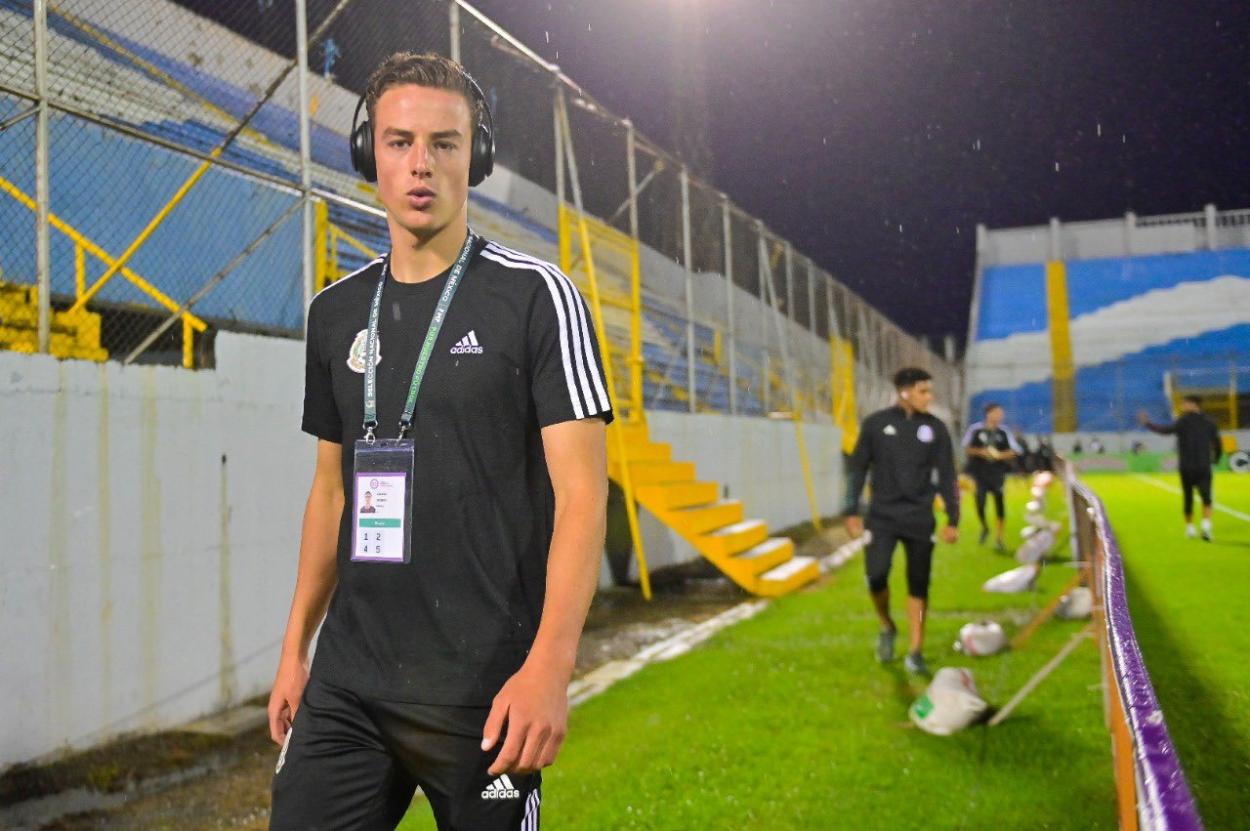 The Suriname national team has never qualified for a World Cup in the U-20 category, and for the second time they will be making their second appearance in this competition. On the other hand, the Mexican team will be approaching almost 30 appearances, this being their 27th participation in this competition.
9:38 PM16 days ago 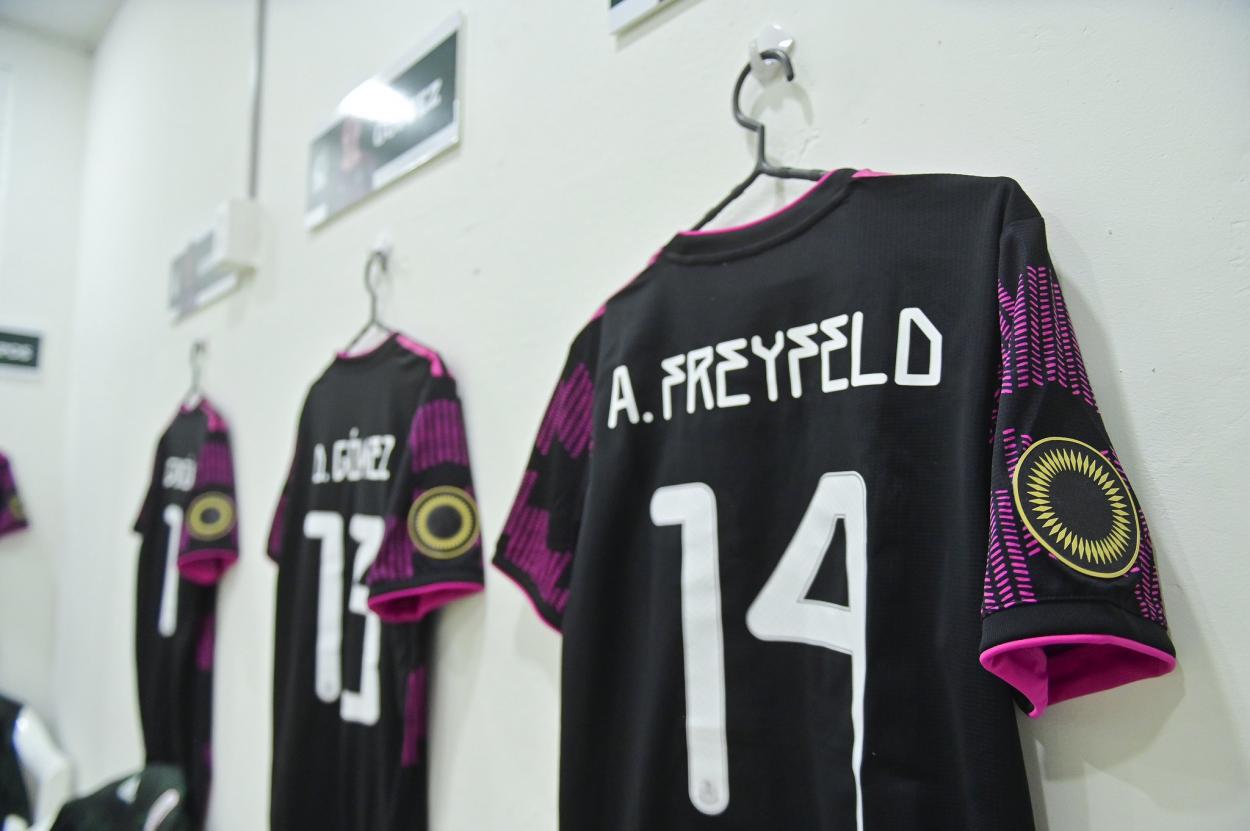 We are back for the minute-by-minute coverage of Mexico vs Suriname. We will shortly share with you the confirmed lineups, as well as relevant facts about the clash between these two teams.
8:48 PM17 days ago

In a few moments we will share with you the starting lineups for Mexico vs Suriname live, as well as the latest information from the Francisco Morazan Stadium, including statements from the players and some interesting facts about this great match between these two teams.

How to watch Mexico vs Suriname Live Stream on TV and Online?

If you want to watch the game Mexico vs Surinam live on TV, your options is: TUDN USA

If you want to directly stream it: Streaming services and TUDN App and TUDN.com

What time is Mexico vs Suriname match for the Friendly match?

This is the start time of the game Mexico vs Surinam of June 19th 2022 in several countries:

In the match against Uruguay, this was the lineup presented by Luis Perez. 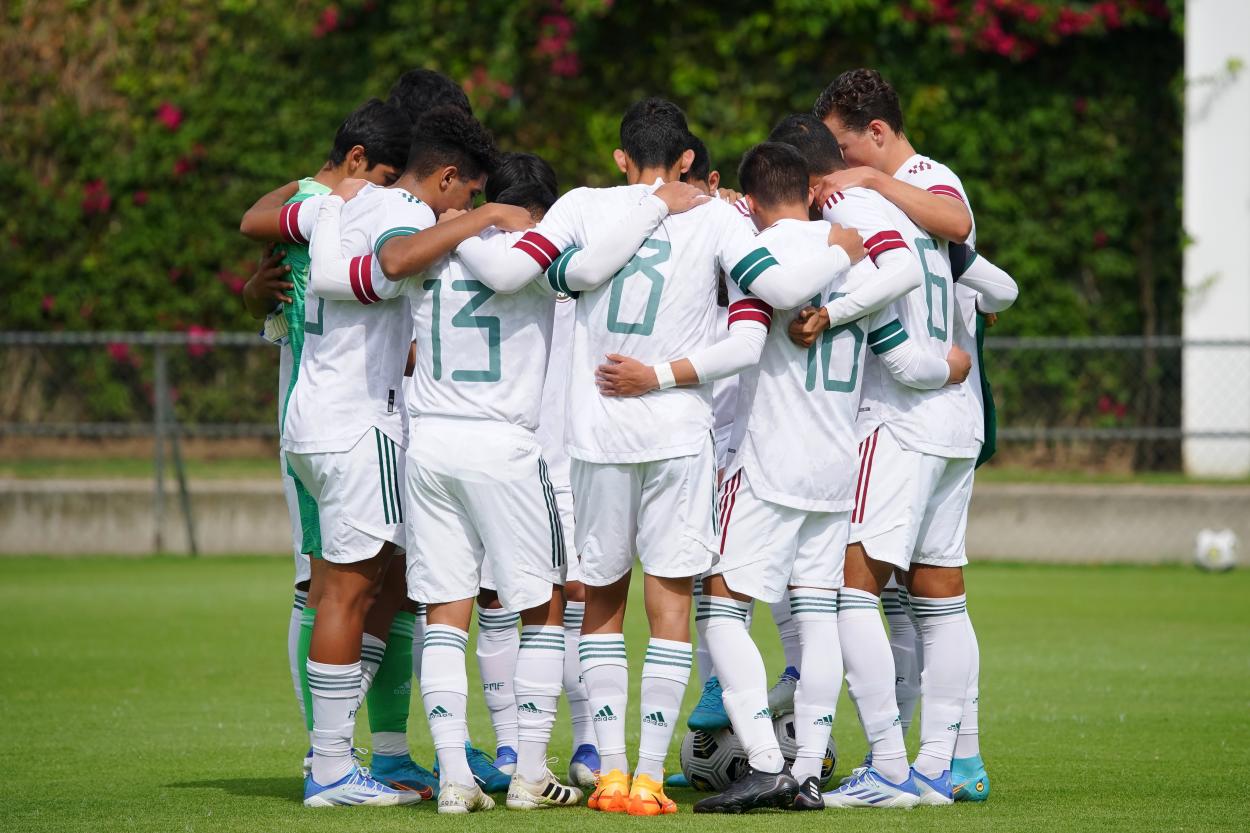 Watch out for this Surinamese player

Jayen Gerold the 17-year-old right winger of the AZ team, who has been denied a goal in his national team, with the Cheese Farmers squad, in the youth Spring League in Holland, has played 17 games in all competitions, scoring 2 goals and 1 assist.
8:18 PM18 days ago

Watch out for this player from Mexico

The captain of this group, Fidel Ambriz, the León midfielder who has made the leap to the first team of La Fiera, where in 12 games as a starter in all the tournaments in which the Guanajuato team participated, he scored 1 goal and his role on the field as a pivot has helped Luis Pérez's Mexican team a lot, being one of his most trusted and untouchable men in his starting eleven.

In addition, he will be the captain of this group, being very happy and motivated for this tournament. 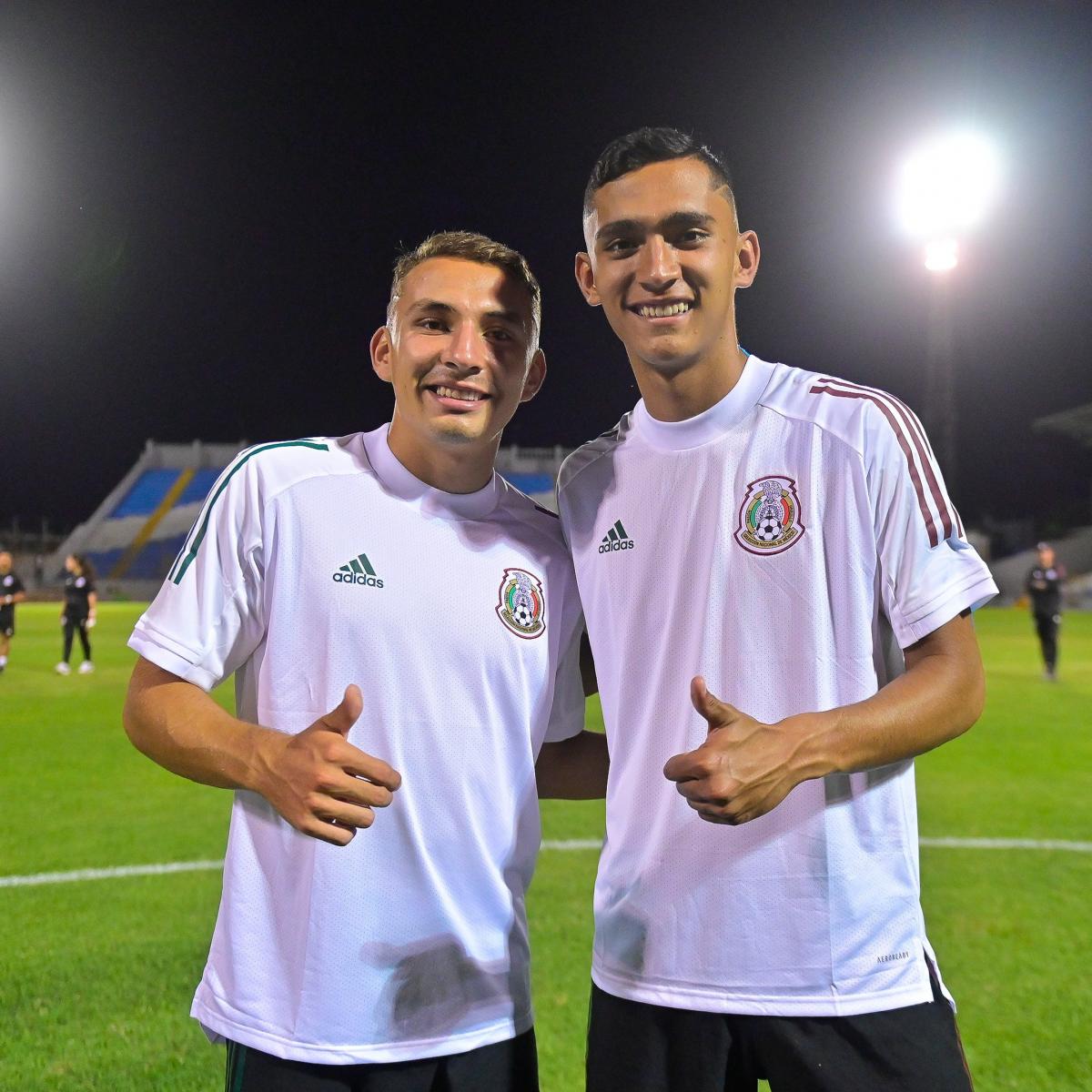 The Mexican national team has been a protagonist in the history of the U-20 World Cup, but unfortunately it has not been given the final result, to be champion, remaining on the verge of that coveted cup.

Only once was the Mexican team on the brink, in Colombia 2011, where they lost against Brazil, but in the third place duel, they won against France.

This pre-World Cup will be the one that will grant some tickets for the World Cup to be held in Indonesia next year and the Olympic Games in Paris 2024.

Aiming for a surprise

A very young team led by 37-year-old Eugene Verwey has spent most of his career guiding Suriname's national teams, from the youngest to the most experienced.

But this group that will lead these games, hoping for a surprise, with elements coming from the Eredivisie. A very young team, where one of its powerful cards is the right winger Jayen Gerold coming from one of the most important squads of Dutch soccer, the AZ, at the moment is being part of the lower categories of the cheese farmers.

Not for having great figures, their soccer is characterized by very tactical issues, with possession of the ball, waiting for the opponent and physically strong. In their last match in this same competition, against the United States, they suffered quite a lot, because they lost seven-nil. It is not an easy group, but not complicated, for the Suriname team, which will be looking to fight for second place and qualify for the next round.

With little time to adapt, the selected players had just traveled on the night of June 17 and arrived in Honduras on Saturday morning. 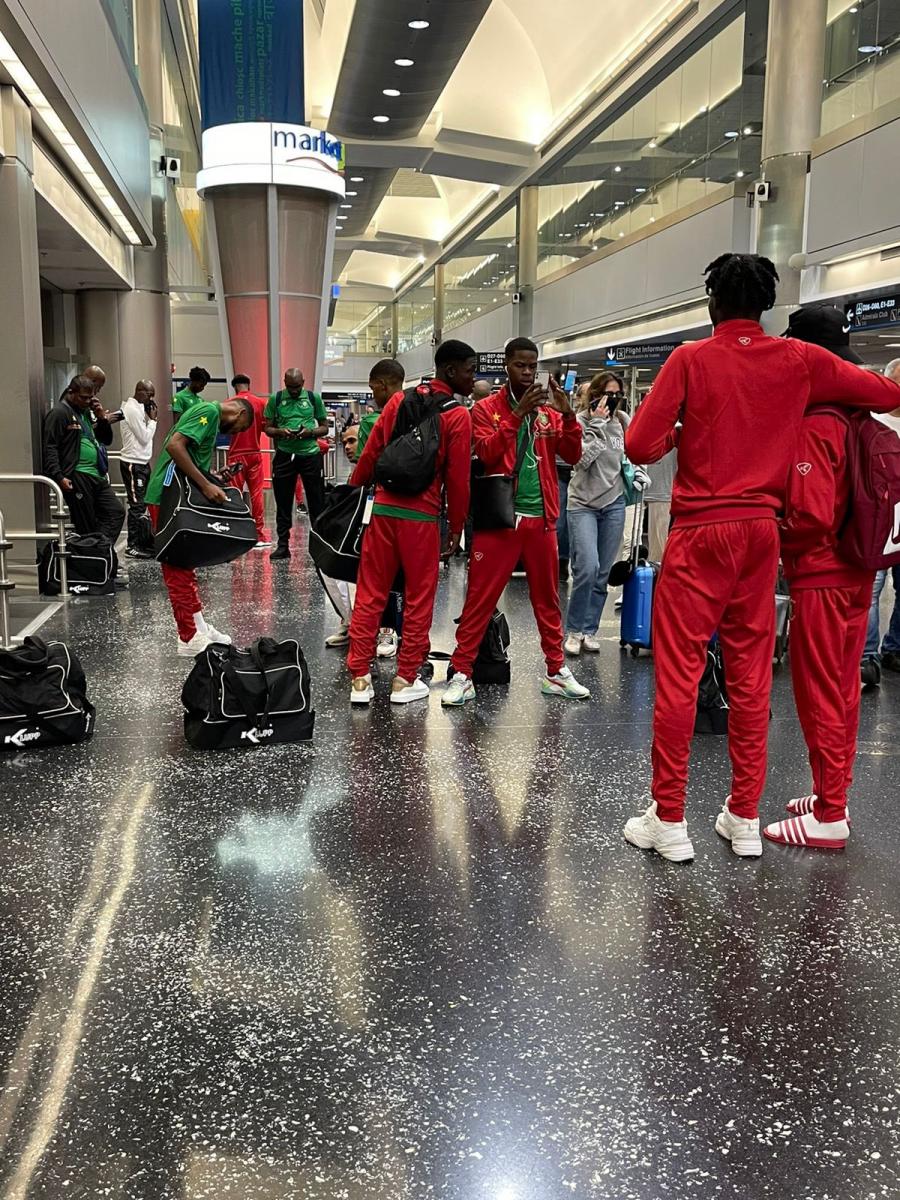 In search of the ticket

In this new challenge for the team coached by Luis Perez, in search of two tickets in this tournament, for the World Cup in Indonesia and the Olympic Games in Paris in 2024.

The call consists of 20 players, where important elements were dropped for different reasons, Marcelo Flores who had shared this training with the group, was promoted to the senior national team to go to the concentration of Gerardo Martino, the other player who fell due to injury, Jonathan Gomez of Real Sociedad, had to leave the CAR to return to his club and be assessed for the severity of his health.

The 'tri' traveled to San Pedro Sula, Honduras, where the Concacaf championship will be held, the group has already trained in Honduran territory, doing physical and tactical work.

The Mexican national team is located in group F, sharing this sector with Suriname, Haiti and Trinidad and Tobago. The 3 games they will play will take place at the Francisco Morazán Stadium.

The captain for this group will be young Fidel Ambriz, from Club Leon, who has been given the confidence by coach Perez to continue wearing the captain's armband. 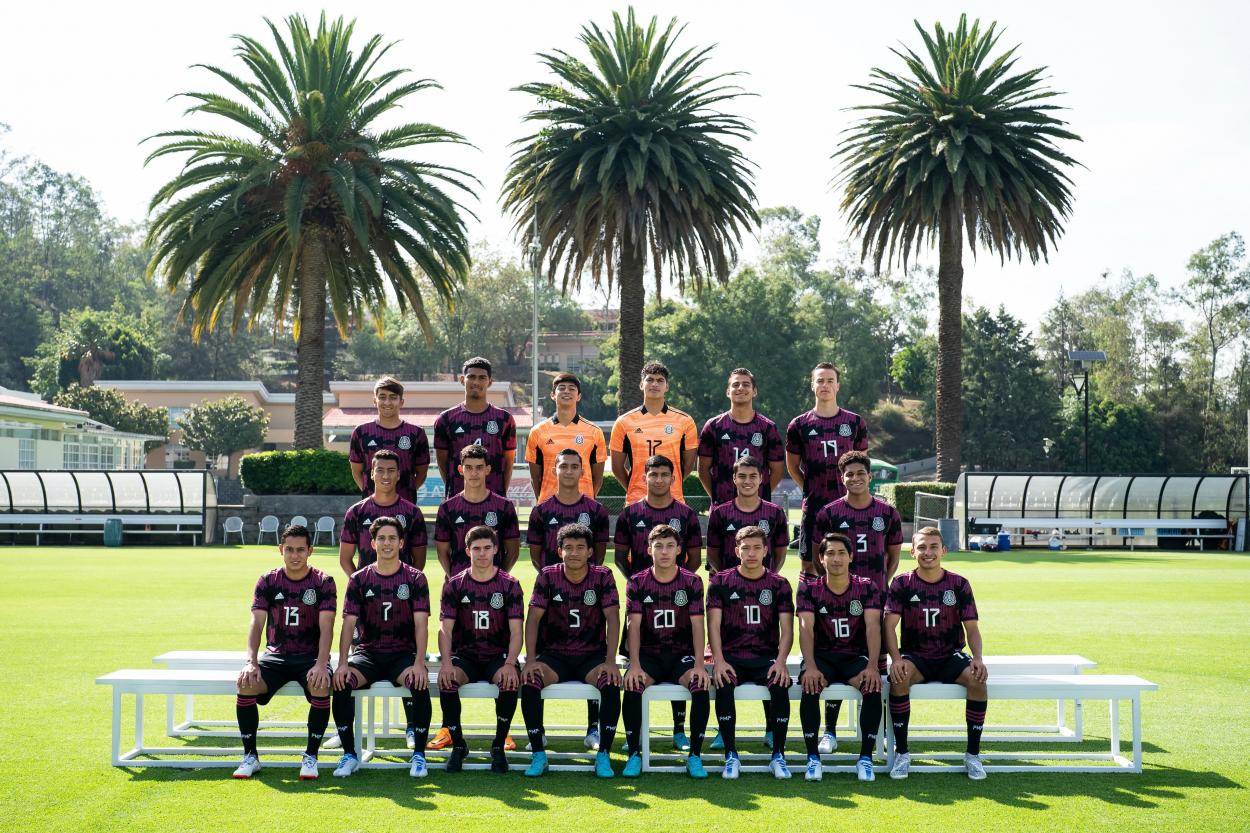 Welcome to VAVEL.com’scoverage of the 2022 Concacaf U-20 Pre World Cup Mexico vs Suriname Live Updates!