thanks for tuning in

Last minutes of the match Honduras is taking the 3 points in match day 3.
6:03 PM7 months ago

Honduras defends in a great way in the final part of the match, they want to take the victory and the 3 points.
5:59 PM7 months ago

Costa Rica looks for the equalizer with 15 minutes left.
5:54 PM7 months ago

Several changes are made to the match.
5:45 PM7 months ago

Gooool for Honduras opens the scoring in the match.
5:44 PM7 months ago

Honduras gets closer to the goal, but still without clarity.
5:38 PM7 months ago

Costa Rica has the most dangerous plays but still can't find clarity.
5:33 PM7 months ago

There are still no changes to the meeting.
5:32 PM7 months ago

In the last minutes of the first half, everything seems to indicate that we will go into the break scoreless.
5:04 PM7 months ago

The score remains tied with no goals scored.
4:59 PM7 months ago

Yellow card for Sorto of Honduras.
4:52 PM7 months ago

Honduras has 2 shots on goal, while Costa Rica has yet to get a shot on goal.
4:43 PM7 months ago

Honduras gradually pressured and began to have dangerous arrivals.
4:37 PM7 months ago

The two teams are fighting hard for the ball and there is still no dominator.
4:33 PM7 months ago

Costa Rica dominates at the start of the match.
4:30 PM7 months ago

The match between Honduras and Costa Rica kicks off.
4:29 PM7 months ago

Great attendance at the Morazán Stadium for one of the best matches of match day 3, Honduras does not stop encouraging its national team that will seek to reach the World Cup of the category in Indonesia 2023.
4:27 PM7 months ago

These two teams are playing for the leadership of the group, Honduras as host will be looking to secure their ticket to the next round, while Costa Rica will be looking for a surprise and defeat one of the toughest teams in the tournament.
4:20 PM7 months ago

Everything is ready for the start of the match, the two teams are getting ready to take the field for the opening whistle.
4:15 PM7 months ago

Both teams are warming up 30 minutes before kick-off.
4:10 PM7 months ago

These are the lineups for the match. 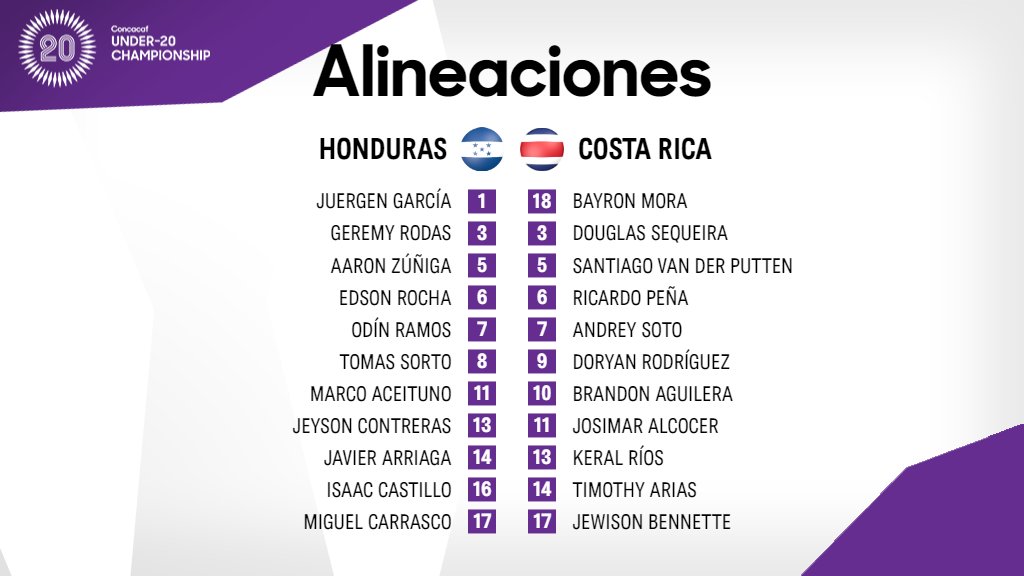 Already arriving at the stadium

Both teams are already at the stadium and are getting ready to warm up.
4:00 PM7 months ago

Slowly but surely, the home fans are arriving at the stadium for the start of one of the most exciting matches of Match day 3.
3:55 PM7 months ago

The central referee in charge of dispensing justice will be referee Reon Radix.
3:50 PM7 months ago

In a few moments we will share with you the starting lineups for Honduras vs Costa Rica, as well as the latest information from the Estadio Morazan. Stay tuned to VAVEL Mexico's minute-by-minute live online coverage of the match.
3:45 PM7 months ago

Where to watch Honduras vs Costa Rica?

The Honduras vs Costa Rica match will be televised on TUDN channel.

If you want to watch the match via streaming you can watch the game through the VIX application.

If you want to watch the game online VAVEL Mexico is your best option.

This is a very even match, these two teams have met twice in the U-20 category, leaving a record of one win for Honduras, one draw and Costa Rica has not been able to beat the Hondurans, despite this, the prediction is reserved as it is a high intensity match for the leadership of Group D.
3:35 PM7 months ago

In this match there will be no players out due to injury or suspension, so Honduras and Costa Rica will be able to count on a full squad for what is expected to be one of the best matches of Group D, the fight for the leadership of the Group, a match that will fill us with goals and emotions.
3:25 PM7 months ago

He is a Costa Rican soccer player who plays as an offensive midfielder in the Asociación Deportiva Guanacasteca of the First Division of Costa Rica, he was born on June 27, 2004 and is 18 years old, in the local league he has played 18 games and scored 4 goals, a very complete player, besides being one of the most important players of the Costa Rican national team, he will look for goals and 3 points in his third game in the U-20 Pre-World Cup, against the host Honduras, without a doubt a great game that awaits us.

He is a Honduran striker who plays as a forward for Real España, he was born on December 28, 2003, he is 18 years old but already participates with the national team in the U-20 category, last game he scored 2 goals against Jamaica and added his third goal in the U-20 Pre-World Cup, he will seek to qualify his national team to the World Cup of the category in Indonesia 2023.

Popularly known as "La Bombonerita" is one of the three soccer stadiums in the city of San Pedro Sula, Honduras. It is an official stadium for games of the National Professional Soccer League of Honduras, has a capacity for 18 thousand spectators and was inaugurated on January 1, 1938. It will be the venue for the first game of Group B between Haiti and Trinidad and Tobago.

In group D the situation is very close, first place goes to the host of the Pre-World Cup, Honduras with 6 points, followed by Costa Rica with 4 points, Jamaica in third place with one point and Antigua and Barbuda in last place with no points, a group in which the leadership of group D will be defined until the last matchday.
3:05 PM7 months ago

Welcome friends of VAVEL to the live broadcast of Honduras vs Costa Rica, match day 3 of the CONCACAF U-20 World Cup. The match will take place at the Estadio Morazan.