Thanks for following the game that defines the group stage, this afternoon Serbia is out after losing 3-2 against Austria, with this result England and Israel advance to the semifinals and qualify to the U-20 World Cup, Austria will define its pass in a duel for the ticket. be sure to visit VAVEL, to follow the semifinals of the tournament.
4:01 PM2 months ago

Goal for Serbia! Ratkov adds the second in search of the equalizer.
3:51 PM2 months ago

Another opportunity that Austria is unable to realize.
3:46 PM2 months ago

Serbia tries with his head but the ball goes wide.
3:41 PM2 months ago

Goooooooooool for Austria! Wallner heads in the third for his team.
3:36 PM2 months ago

Goal for Austria! Querfeld gives his team the lead back.
3:31 PM2 months ago

Serbia came close to going ahead with a great shot.
3:16 PM2 months ago

Goooooooool for Serbia! Lazetic scores the equalizer.
3:11 PM2 months ago

Austria's captain receives a yellow card for a strong tackle.
3:06 PM2 months ago

Goooooooool Austria! Great header by Querfeld to put his team ahead.
2:56 PM2 months ago

Serbia is putting constant pressure on the opponent.
2:51 PM2 months ago

Austria came close after a cross-shot.
2:46 PM2 months ago

This is the bench of both teams: 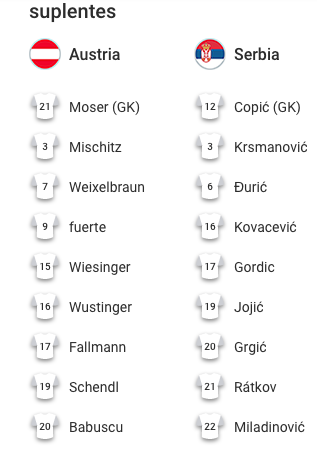 This is how the visiting team comes out:
2:26 PM2 months ago

This is how the Austrian team will start:
2:21 PM2 months ago

Serbia has everything at stake

Serbia lost to England on Matchday 2. They have one point to second-place Israel's four, so they need to win to have any hope of finishing runners-up in Group B.
2:16 PM2 months ago

The hosts will be playing for their place in a duel

What is at stake in this tournament?

Group stage matches conclude on Saturday, June 25, with the top two teams from each group advancing to the semifinals three days later.
The four semifinalists will qualify for the 2023 FIFA U-20 World Cup in Indonesia, along with the winner of a playoff between the teams finishing third in the two groups, taking the five UEFA berths.
2:06 PM2 months ago

Inaugurated in 1959, the stadium located in Slovakia has a capacity of 9800 spectators, and today will host a great duel that will tell us who will advance to the semifinals of the tournament.
2:01 PM2 months ago

England has already secured top spot in Group B

England are already assured of a place in the quarter-finals with two wins secured, the England coach is still not looking beyond Israel because "soccer has a funny way of biting you if you take liberties".
1:56 PM2 months ago

Thank you for following the Austria vs Serbia game, today the qualifiers to the next round of the tournament will be defined, so stay tuned as we will tell you everything you need to know before the start of the match.
1:51 PM2 months ago

Stay tuned for live coverage of Austria vs Serbia

In a few moments we will share with you the starting lineups for Austria vs Serbia live, as well as the latest information from the SNP Stiavinky Stadium. Keep an eye on the action with VAVEL's minute-by-minute live online coverage.
1:46 PM2 months ago

Where and how to watch Austria vs Serbia live online

The match will be broadcasted on ESPN Star+.

Watch out for this player from Serbia

Ognjen Ajdar, a center forward who can also play on the wing, with three goals in the qualifying phase, is the player to follow as his scoring ability may be the key to give his national team a place in the next round. The player comes from Bask Belgard in the local league and is likely to be the future star of that country.
1:36 PM2 months ago

Watch out for this player from Austria

Muharem Huskovic, Austrian center forward, his two goals in the playoffs make him the player to watch in this duel as the Austria Vienna player is a talented player who can give his team a victory.
1:31 PM2 months ago

The Serbian national team has been working well since its youth, at senior level they have achieved the qualification to the Qatar 2022 World Cup, now this U-19 team has the task of continuing to grow soccer, however this team has not managed to get the expected results to ensure their qualification and now they will have to go out with the obligation to get the victory, In case of getting it, they will have to wait for the result of the game between England and Israel, because if the Israeli team gets the three points, they will leave Serbia out, this duel can be taken as a final for Serbia and surely they will not want to lose it.
1:06 PM2 months ago

Austria does not want to leave without points

The Austrian U-19 team is placed in group B of the European Championship, however it seems that their participation is already over with one match to play, this team has not scored points in their two previous games against England and Israel, now they will try not to be the team that could not score any points, this team could ruin the competition for their rival so that should be their motivation for tomorrow's match, although it is already a great merit that they are in this competition, leaving without scoring points will affect them morally.
1:01 PM2 months ago

The groups begin to be defined

The U19 European Championship is reaching the third game of the group stage, this time we will see two teams that have not had a good tournament and do not want to be among the teams that do not win any game in this phase, Austria and Serbia at senior level are two very competitive teams that can easily surprise others of greater prestige.
12:56 PM2 months ago

Good afternoon to all VAVEL readers! Welcome to the Austria vs Serbia live stream of the UEFA European Under-19 Championship. The match will take place at the SNP Stiavinky Stadium at 2:00 PM ET.

NYCFC vs Charlotte FC preview: How to watch, team news, predicted lineups, kickoff time and ones to watch 15 hours ago