We end tonight's broadcast and invite you to follow us next time.
10:22 PMa month ago

The first chapter of this key is over, where neither of them took advantage and everything will be solved in La Plata.

Although Estudiantes played better, was better from the collective point of view, Fortaleza took advantage of the few they had and almost won a match where they were inferior inside the field.

Fortaleza looked for it in the last minutes, but Estudiantes looked very good at the back.
10:19 PMa month ago

The player Pikachu falls to the ground in the opponent's area, it seems at first glance that there is no penalty, but the VAR is apparently talking to the referee and there is still no continuity.
10:17 PMa month ago

Not much happens in the last minutes, it seems that the teams are happy with the result.
10:12 PMa month ago

Trouble in the area between Diaz and the home goalkeeper, but the referee resolved it easily with a yellow card for both.
10:08 PMa month ago

The visitors continued to attack and now Diaz's shot in the area went wide.

After this, the assistant raised the flag and the play was disallowed.

There are changes in the local team, Ronald and Capixaba leave, to give way to Felipe and Crispim.
10:05 PMa month ago

Diaz is found on the ground and medical assistance must come in to attend him, he gets up a few seconds later and continues to be attended to outside the field.
10:02 PMa month ago

The level of play rises, both teams are looking for it but the defenses are at a standstill in these last minutes.
10:01 PMa month ago

A pass to the back that seemed to be controlled by the Fortaleza defense, Diaz threaded the ball and Heredia anticipated, shot but the goalkeeper made a good save.
9:58 PMa month ago

For the visitors, Boselli leaves the field and Heredia takes his place.
9:57 PMa month ago

There is a strong foul by an Estudiantes player, the opponents ask the referee to go to the VAR, but he does not receive a call and the match continues.
9:54 PMa month ago

For the local team, Landazuri is injured and Romarinho comes in in his place.
9:54 PMa month ago

The home team's spirits drop and now Estudiantes is back in the game.
9:53 PMa month ago

The changes were useful, as Mas filtered a ball to Rollheiser, who simply went all the way to the back, then sent the cross back and Diaz, who had also just entered the field, shot inside the box to tie the game.
9:51 PMa month ago

For the visitors, Castro and Zapiola came off the bench to make way for Rollheiser and Díaz.
9:44 PMa month ago

The local team lifted their spirits, got into the game and looked for the second goal.
9:43 PMa month ago

When Estudiantes was playing at its best, Landazuri stole a ball at the start, passed it to Romero, who only had to shoot with his left foot to beat the rival goalkeeper.
9:41 PMa month ago

Estudiantes came out more determined for the victory and wants to score as soon as possible.
9:37 PMa month ago

Strange play in the Fortaleza area, Estudiantes ends up eating it with a shot that hits a rival, but then the flag is raised and the play is over.
9:35 PMa month ago

High pressure from Estudiantes, Boselli won the ball, left it to Castro, who could not finish comfortably and missed the opportunity.
9:35 PMa month ago

Once again Estudiantes took the initiative, took possession of the ball and looked for the opponent's area.
9:33 PMa month ago

With no changes, the second half began with the home team coming out with a different attitude and looking for a quick goal.
9:31 PMa month ago

The last 45 minutes of this key to be played in Brazil are underway.
9:18 PMa month ago

The first 45 minutes of this exciting match are over and the score has yet to be opened in Brazil.
9:18 PMa month ago

A great play by Moises, who individually entered the area, took out the goalkeeper, defined as it was, but Rogel came out of nowhere and took it off the line.

1 more minute will be played in this first half.
9:12 PMa month ago

The visiting team's intensity dropped, and the home team took advantage of this and began to settle in the opponent's field.
9:12 PMa month ago

The home team had a chance, a cross from a corner kick from the left, Landazuri won with a header, but it hit an opponent and then he took the rebound, shot with a half volley and the ball went over the crossbar.
9:10 PMa month ago

A cross from the left by Estudiantes, they won with their head, but they defined very poorly and that was the end of the game.
9:06 PMa month ago

Although Fortaleza does not dominate and their opponents play in their own half, the Brazilian team does not suffer the game and always tries to get the ball on the ground.
9:04 PMa month ago

Capixaba is cautioned in Fortaleza, for a strong offensive foul.
9:03 PMa month ago

Fortaleza enjoyed sparks that at times brought them close to the opponent's area, but they did not take advantage of them and ended up giving the ball away badly in the last zone of the field.
9:01 PMa month ago

Collectively, Estudiantes does very well, but if it lacks collective depth, it also lacks individuals who can help it to get a stronger foothold in the opponent's area.
8:58 PMa month ago

Fortaleza could only breathe easy for a few minutes, but Estudiantes put them back in their own half.
8:57 PMa month ago

Fortaleza improves a little, as they are no longer so deep in the back and they also have a foot in the opponent's area.
8:56 PMa month ago

Lima found a ball in the area, took a beautiful shot, the ball went to the back of the goal, but the assistant raised the flag and the play was over.
8:55 PMa month ago

Godoy found a ball on the right flank, faced the ball and entered the area, he shot hard and low, but the goalkeeper made a save and on the rebound Zapiola could not control because he was not expecting the ball and the play was over.

The visitors are playing much better, not giving their opponents space, recovering quickly and not suffering in defense.
8:50 PMa month ago

Castro's shot from half distance, but the ball went wide and Estudiantes missed it.
8:49 PMa month ago

At times the game is a bit strong and with friction, the referee tries to continue, but there are fouls that he must whistle and stop the game.
8:46 PMa month ago

Fortaleza takes a breather and has possession of the ball in the opponent's half.
8:45 PMa month ago

The Argentine team is getting closer and closer to their opponents' goal, but still lacks the necessary depth to create real danger.
8:42 PMa month ago

The visiting team played in the opposing half, with a very centralized game and little use of the flanks.
8:41 PMa month ago

Defensive miscues by Estudiantes, allowing Fortaleza to get close to the opponent's area with ball control.
8:39 PMa month ago

Estudiantes tries to find the rhythm of the game, does everything en bloc, but does not manage to dominate completely.
8:37 PMa month ago

Back and forth play but no presence in the penalty area, both teams lacked depth.
8:34 PMa month ago

Estudiantes dropped the pressure a little, so the home team could start to circulate the ball in the midfield and look for space in the opponent's half.
8:32 PMa month ago

The first minutes of the game, with Estudiante pressing high, trying to stifle its rival and succeeding in these first moments of the game.
8:30 PMa month ago

The ball is moving in Fortaleza and the first leg of the first leg, valid for the round of 16 of the Copa Libertadores 2022, is underway.
8:27 PMa month ago

The protocol acts have already been done, the drawing of captains, so everything is ready and only the referee's order is missing, to start tonight's commitment.
8:26 PMa month ago

Teams in the mixed zone, the players greet each other, they are friends and colleagues, only the order of the central referee is missing, so that they go out to the field and the match begins.
8:14 PMa month ago

Everything is ready for the teams to take the field, it is expected that at any moment they will be in the mixed zone and together with the referee team, they will take the field to start tonight's match.

The stadium has a good atmosphere and the only thing missing is for the protagonists to move the ball.

This is how Estudiantes presents its headlines

This is how Fortaleza presents its headlines 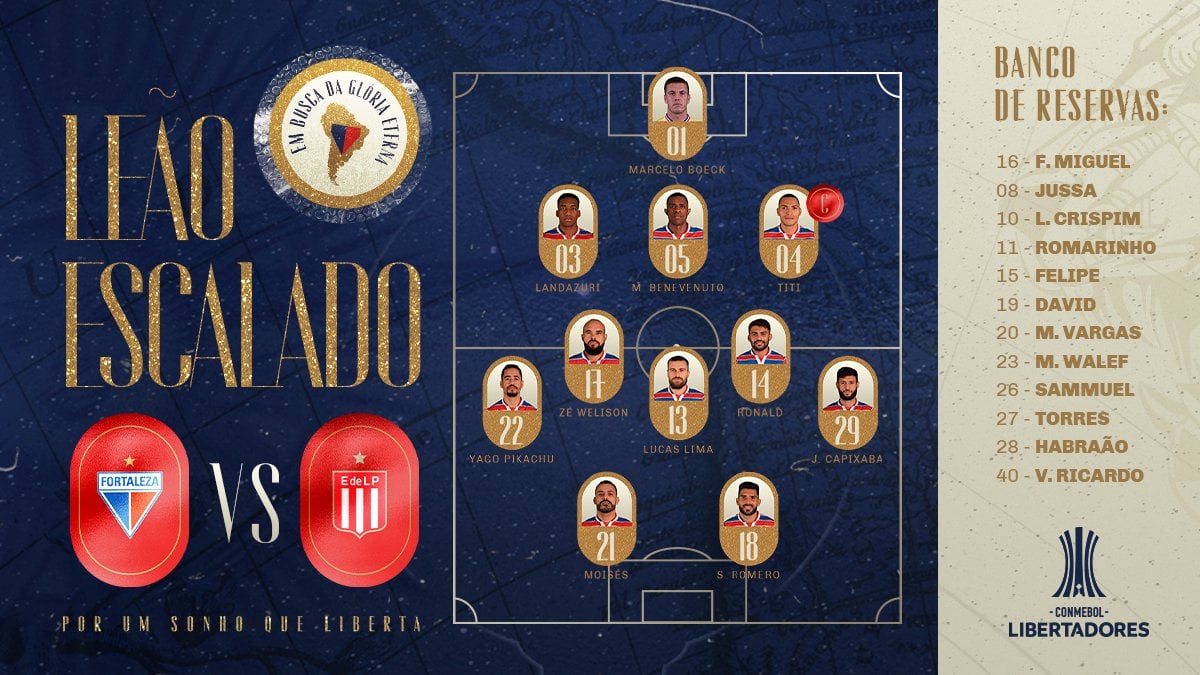 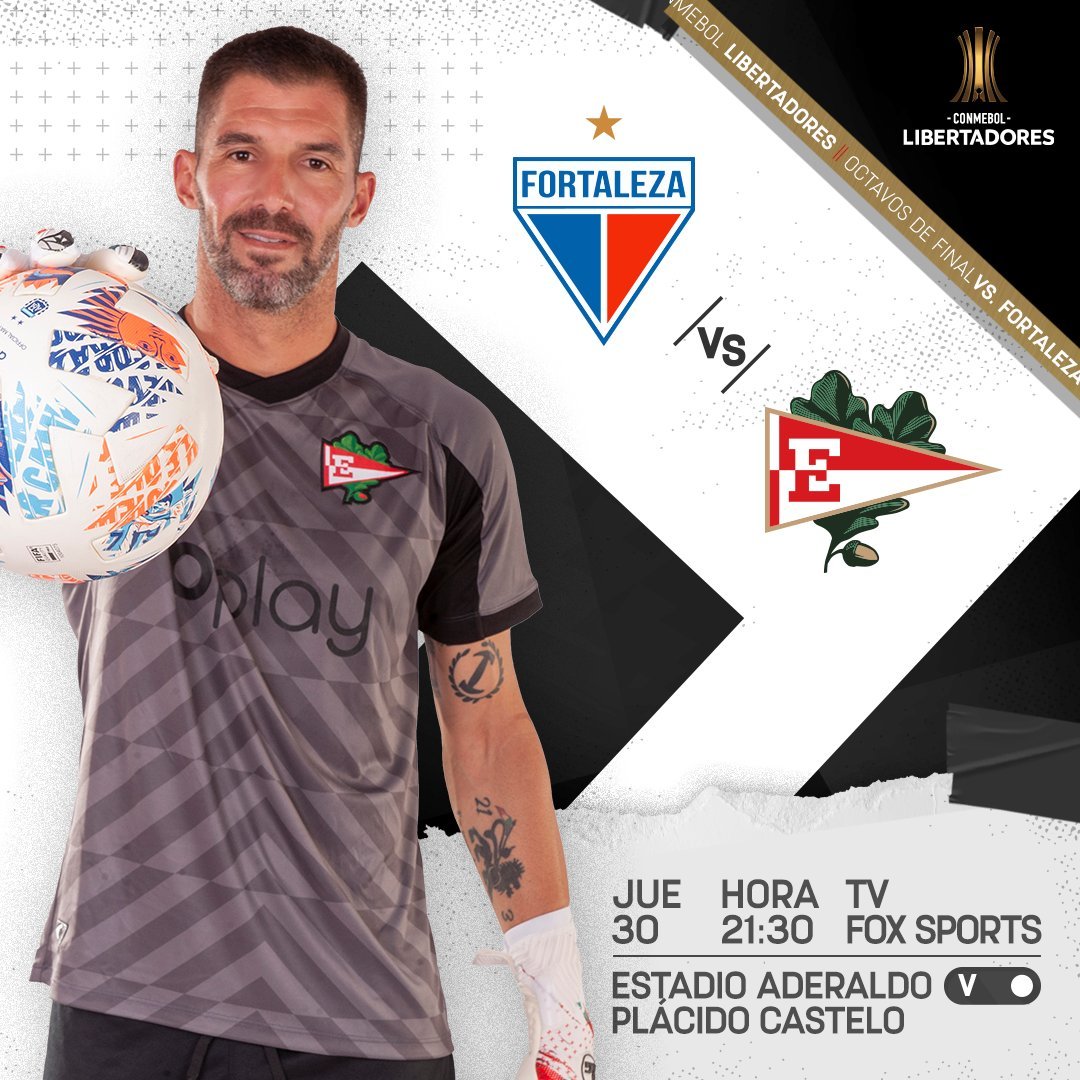 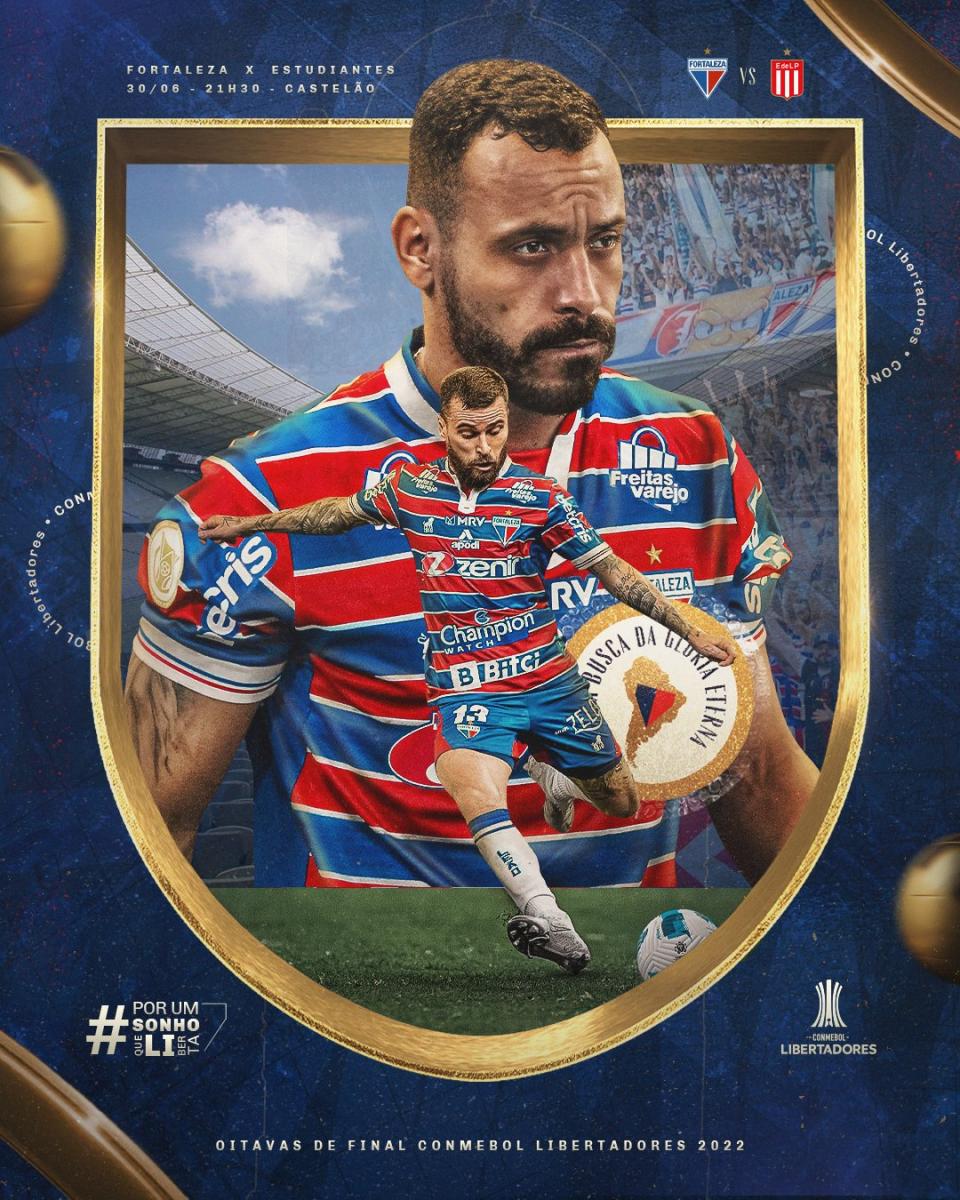 The teams are already living with intensity this game valid for the first leg of the round of 16 of the Copa Libertadores 2022. The teams are using social networks to live a preview with their fans and have a good relationship with their supporters.
7:51 PMa month ago

We are ready to bring you all the action from this match between Fortaleza vs Estudiantes.
11:56 PMa month ago

Stay tuned to follow Fortaleza vs Estudiantes live on TV

In a few moments we will share with you the starting lineups for the Fortaleza vs Estudiantes live match, as well as the latest information from the Castelão Stadium. Stay tuned for up-to-the-minute live coverage of the match on VAVEL.
11:51 PMa month ago

How to watch Fortaleza vs Estudiantes live?

What time is Fortaleza vs Estudiantes?

Leandro Díaz is the outstanding player in Estudiantes de la Plata, as he is an important player in the team's set-up area. He has already scored 1 goal and provided 3 assists.

His average rating is 6.9 per game.

The outstanding player is Moises, the Brazilian team's player is important in the offensive zone, he has already scored 3 goals and also provided an assist.

His average rating per game is 7.3.

The two teams have never met, while the Brazilian team has had few encounters with Argentinian teams.

Fortaleza has only played against Argentine teams four times... There they have one win, one draw and two defeats.

Estudiantes, on the other hand, has played 25 matches against Brazilian teams, with 11 wins, 2 draws and 12 defeats.

The team from Rio de la Plata has a slightly different present, as it was first in its group and has not fared badly at the start of the Argentine League.

Estudiantes was leader of group C with 13 points and a difference of +3, and was one of the qualified teams with the fewest goals against (together with River Plate, Boca Juniors and Corinthians).

In Liga it is ranked 16th out of 28 teams and after 5 disputed matches has 7 points, it is 6 behind the leader which is Newell's Old Boys.

Fortaleza to save the season

Fortaleza has two faces, the one it shows at international level and the one it has in the Brasileirao, since in the first tournament it is doing well and advanced to the next round, but in the second it is in the relegation zone.

The Brazilian team qualified second in group F, obtained 10 points out of a possible 18 and had a difference of +1.

Fortaleza has been irregular in its play in the last 5 games. For they won 2 games, drew 2 and drew 1.

The match will be played at Castelão Stadium.

This stadium is one of the largest in the country and has a capacity of 65,000 spectators. 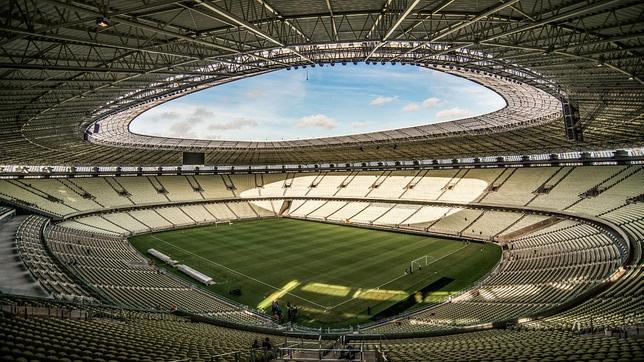 Hello everyone! Welcome to the live broadcast of the match Fortaleza EC vs Estudiantes de la Plata, valid for the first leg of the round of 16 of Copa Libertadores.

My name is Andrés Mesa and I will be your host for this match. We will offer you pre-match analysis, score updates and live news, here on VAVEL.