Thank you for following the broadcast on VAVEL

Thank you for following our coverage of Mazatlán FC vs Tigres from El Kraken Stadium in the Pearl of the Pacific; match corresponding to Day 2 of Liga MX.
10:00 PMa month ago

The match between Mazatlán FC and Tigres UANL comes to an end, with Miguel Herrera's team taking the victory in the start of Matchday 2.
9:40 PMa month ago

André-Pierre Gignac (Tigres UANL) right footed shot from outside the box is close, but misses to the right. Assisted by Guido Pizarro.
9:25 PMa month ago

Marco Fabián (Mazatlán) right footed shot from outside the box misses to the right. Assisted by Jefferson Intriago.
9:14 PMa month ago

FAREWELL TO CORDOVA! Sebastián Córdova is sent off after committing a foul on a clear goal-scoring play in favor of Mazatlán.
9:06 PMa month ago

The second half begins between Mazatlan and Tigres, the felines want to increase their lead while the cañoneros will be looking to go all out in the second half.
8:50 PMa month ago

The first half ends between Mazatlan FC and Tigres UANL. The felines are leading by the minimum on the scoreboard.
8:44 PMa month ago

Eduard Bello (Mazatlán) right footed shot from outside the box is high and wide to the right from a direct free kick.
8:38 PMa month ago

Florian Thauvin (Tigres UANL) right footed shot from outside the box is blocked.
8:30 PMa month ago

ZERCAAAAAA! Gignac volleys the ball past Vikonis.
8:25 PMa month ago

Carlos Vargas (Mazatlán) left footed shot from outside the box misses to the right.
8:16 PMa month ago

GOOOOOOOOOOOL FOR THE TIGERS. Andre Pierre takes advantage of Thauvin's through ball and scores the first goal for the felines.
8:08 PMa month ago

Foul on Guido Pizarro in midfield by Marco Fabian.
8:02 PMa month ago

Indirect free kick for Tigres. The felines have the opportunity to score the first one.
8:01 PMa month ago

The game between the Cañoneros and the felines begins in the Pearl of the Pacific.
7:45 PMa month ago

In a couple of minutes we will start with the rebroadcast of Mazatlán FC vs Tigres, a match corresponding to the second matchday of Liga MX.
7:44 PMa month ago

TO CUT THE STREAK

Mazatlán FC has lost its last two matches against Tigres, after being undefeated in their first two games, so now they will be looking to break this negative streak and try to win glory on their home field and in front of their fans.
7:42 PMa month ago

These are the lineups of both clubs to kick off Day 2 of Mexican football. Mazatlán and Tigres are going all out in search of the three points. 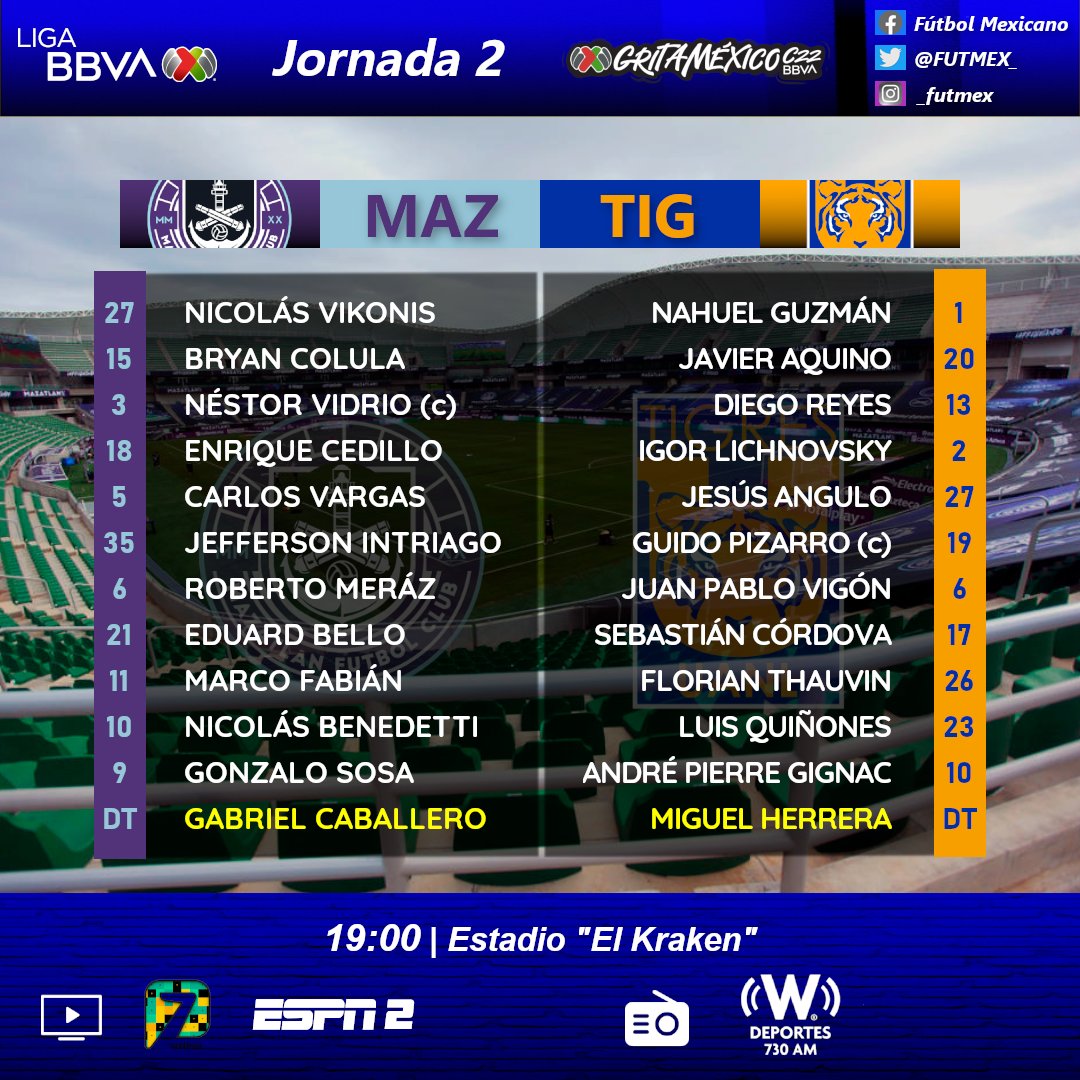 WHAT WILL HAPPEN WITH JORY CAICEDO?

The new member of the Tigres team will not play minutes in this match because, while the team made the trip to play the match, he will be going to Nuevo Laredo to process his work visa. If all goes well, he will be able to see action in Matchday 3.
7:24 PMa month ago

Miguel Herrera has not closed the door on the possibility of someone else joining his squad, although he knows that for now it is not necessary to look for another reinforcement.
"As long as the market remains open, we have the possibility of looking for someone and it's not just one, it could be two, we are not closing the possibility of bringing in people, we have been talking about it with the board, although we don't feel that we need reinforcements because we have a very large roster", said the helmsman.
7:18 PMa month ago

NEW DEFENDER COULD ARRIVE AT TIGRES

In the last few hours, it has been rumored that the Tigres board of directors may have closed the deal for Vladimir Loroña, a Xolos defender, as a new feline signing. According to Pollo Maldonado, a journalist who specializes in covering the universitarios, the signing will be made official in the next few days.
7:09 PMa month ago

THEIR FIRST TEST OF THE TOURNAMENT

The Mazatlán gunners will have their first test of the championship when they receive Miguel Herrera's pupils. Tigres is one of the most complete teams in Mexican soccer and is always in the hunt for the title, which is why Gabriel Caballero's team will have to come up with a good strategy to achieve victory.
7:04 PMa month ago

IN SEARCH OF THEIR FIRST VICTORY

Tigres will be looking for their first victory of the competition today after having surprisingly lost to Cruz Azul on Matchday 1, as the felines felt that they would get a draw and not leave with a clean sheet; however, a penalty kick against them during the match ended up burying them and snatching the points at home.
7:02 PMa month ago

The wait is over, the second day of Mexican soccer kicks off with the duel between the Mazatlan Cañoneros and the UANL Tigres at the "El Kraken" Stadium in the Pearl of the Pacific. Both teams will be looking to start the second day of the Apertura 2022 championship with a bang.

Do not miss a detail of the match with the live updates and commentaries of VAVEL. Follow along with us all the details, commentaries, analysis and lineups for this Mazatlan vs Tigres match.
2:34 PMa month ago

What time is Mazatlan vs Tigres match for Liga MX game?

This is the start time of the game Mazatlan vs Tigres of 8th July in several countries:

For this match, as always, André-Pierre Gignac will be the player to watch for the feline team. The French striker is the felines' offensive force, in charge of generating, searching for the ball and opening up space to look for a shot that will allow Tigres to get on the scoreboard. In addition, his great experience and mastery of the small area has enabled him to be the goal-scoring champion on several occasions since he arrived in Liga MX.
2:24 PMa month ago

Watch out for this Mazatlán player:

For this match, the player to watch will be Nicolás Benedetti. The "poet" has become a fundamental piece in the cannonballers' offensive midfield and is in charge of distributing the ball to the others so that Mazatlán can find a way to generate danger and score goals. He has also been gradually regaining his level, making him a latent danger for the feline defense. 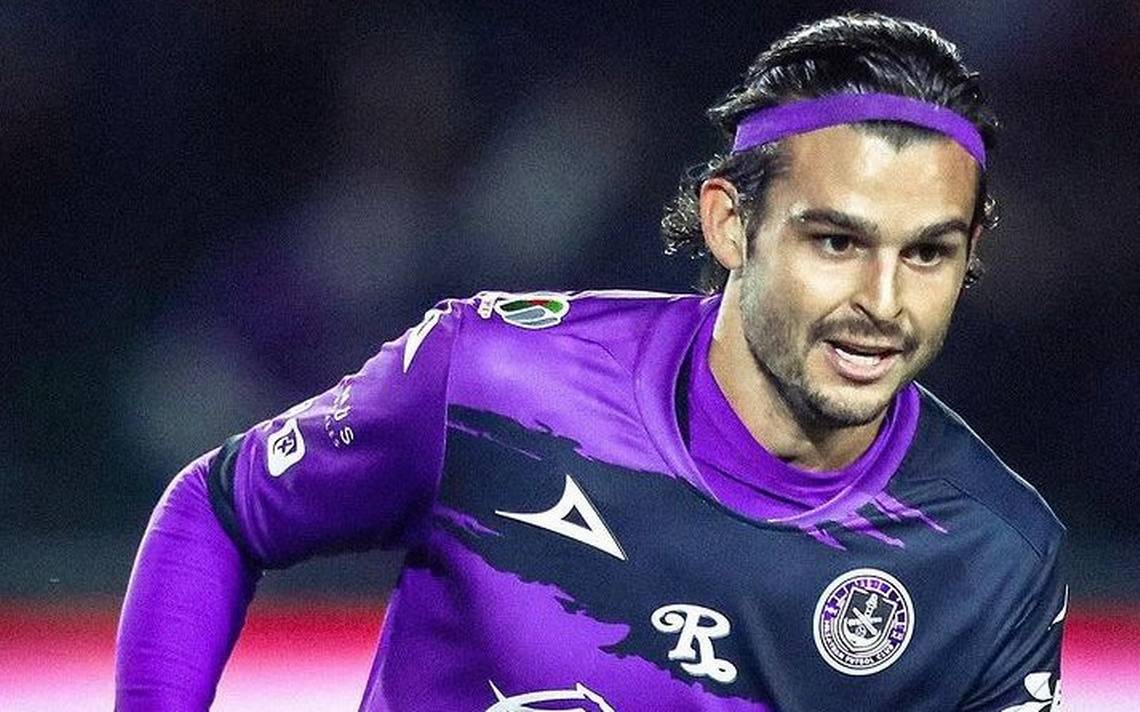 Mazatlan and Tigres have faced each other on a total of 5 occasions (1 win for Mazatlan, 2 wins for Tigres and 2 draws) where the advantage leans in favor of the team from Monterrey, likewise, in goals, it is the feline team who has the advantage with 9 goals scored over 6 canoneros. Their last meeting dates back to matchday 4 of the Clausura 2022 Tournament, where Tigres defeated Mazatlán 4-3 in a duel full of emotions.
2:04 PMa month ago

The Mazatlán Soccer Stadium, is a soccer stadium located in the city of Mazatlán, Sinaloa, Mexico, was inaugurated on July 27, 2020 and has a capacity for 25,000 spectators, being used only 20,195 seats, it is the home of Mazatlán FC, which plays in the First Division of Mexico from the Apertura 2020 Tournament.

On July 27, 2020 the first match in the stadium's history was played, with a match between Mazatlán Fútbol Club and Club Puebla corresponding to the first day of the Guard1anes 2020 Tournament, the score ended with a 1-4 victory in favor of the Puebla team, the first goal scored in this venue was scored by player Santiago Ormeño.

To raise their game

Last week, the Tigres team faced the Cruz Azul cement machine at the Universitario Stadium. The team coached by "piojo" Herrera was in a great duel against the blue and white team, as the game was tied 2-2 in the last minutes of the match, but the felines were surprised at the end with a penalty kick in favor of Cruz Azul, which was taken by Santiago Giménez to snatch the victory in the final moments. Now, the team led by Miguel Herrera and headed by Gignac will be looking for the three points they already had in their hands against Mazatlán and to show their fans that, as is normal in every tournament, Tigres will be fighting for the title.
1:54 PMa month ago

The Cañeros are looking to win at home

The Mazatlán team will be looking to win their first three points of the championship when they host Tigres in Matchday 2 of the Mexican championship. The team coached by Gabriel Caballero lost to Puebla de Larcamaón by a score of 4-2. In general, the team from the pearl of the Pacific had a great performance, but their defensive errors cost them the four goals they conceded, even so, offensively they had many dangerous chances that were not scored due to the great performance of Anthony Silva. Mazatlán will have to play with the same intensity and be more concrete against Tigres de la UANL if they want to dream big in this new start of the tournament.
1:49 PMa month ago

Liga MX is back with all the action and excitement of every tournament, in this tournament the teams only had a month to prepare themselves to start a new adventure called Apertura 2022, a championship that will have a high intensity without rest from now until November, so this time the teams will have to give 100% at all times to win the championship at the end of the road. For Matchday 2, the Mazatlán Cañoneros will host the Felinos del Norte at El Kraken with the mission of getting three points, as both teams lost their home games.
1:44 PMa month ago

The Mazatlan vs Tigres match will be played at the Estadio El Kraken, in Mazatlan, Sinaloa. The kick-off is scheduled at 20:00 pm ET.
1:39 PMa month ago

Welcome to VAVEL.com’s LIVE coverage of the 2022 Liga MX Match: Mazatlan vs Tigres!

Diaz, Zelarayan lift Columbus in 3-2 win over NYCFC 8 hours ago