THANKS FOR FOLLOWING THE REBROADCAST ON VAVEL

Thank you for following the minute by minute on VAVEL, continue to visit the VAVEL portal to keep up to date with what is happening in the world of sports.
12:05 AM25 days ago

GOOOOOOOOOOAL FOR AMÉRICA! In the dying moments of the match, Sanchez scored and gave the victory to the eagles.
11:41 PM25 days ago

America comes close! Jürgen Damm overflows in the area and sends a low cross that finds Mozumbito, but the latter ends up sending his shot into the stands.
11:27 PM25 days ago

Luis Fuentes' shot was saved by Thiago Volpi. América has looked much better compared to Toluca, who have not been able to generate danger in the Azulcrema area.
11:15 PM25 days ago

America comes close! The second half started with a bang and Jonathan Rodríguez came close to scoring the first goal of the match but his shot went inches wide of the far post.
11:08 PM25 days ago

The second half begins between América and Toluca.
10:58 PM25 days ago

VAR COMES INTO PLAY. Goal disallowed for obstruction of the opponent.
10:50 PM25 days ago

AMÉRICA'S GOAL! Jonathan Rodríguez assists Álvaro Fidalgo who hits it from outside the box and nails the ball as close as possible to Volpi's right-hand post. The shot is untouchable!
10:34 PM25 days ago

goodbye to Claudio Baeza! The Cerrucho lets it all go and commits a hard foul on Diego Valdés that ends in a red card for the scarlet player.
10:32 PM25 days ago

Diego Valdés faced and got into the small area, he put a delayed pass that Henry Martín shot very weakly and Toluca's defensive saga cleared away from his goal.
10:28 PM25 days ago

Great cross by Huerta! The center back makes a sensational cross to prevent Jonathan Rodriguez from heading alone on goal.
10:22 PM25 days ago

Richard Sánchez takes a corner kick that ends in a bad shot by Diego Valdés and the ball bounces out of danger for Volpi.
10:18 PM25 days ago

Toluca comes close! Jean Meneses takes Jorge Sánchez with him in a duel of speed, entered the back line, sent in a low cross that was touched by Fernando Navarro and Memo Ochoa saved the opportunity.
10:12 PM25 days ago

América has slowly begun to balance things out and has already reached the goal defended by Thiago Volpi.
10:06 PM25 days ago

Only three minutes into the match and Toluca has already pinned America back in their own half.
10:02 PM25 days ago

The game kicks off from the Azteca Stadium, the Eagles face Toluca in the start of the third round of the Liga MX.

In a couple of moments we will start with the rebroadcast of América vs Toluca, a match corresponding to match day 3 of Mexican football.
9:40 PM25 days ago

These are the line-ups that América and Toluca will be sending out for the start of Day 3 of Mexican soccer.

TO CONTINUE THE GOOD STREAK

América is undefeated at the Azteca when playing against Toluca since their last 4 games, if they win today, the eagles would equal their longest winning streak against the devils with 5 home games.
9:33 PM25 days ago

WE MUST NOT LOSE OUR FEET ON THE GROUND

At the press conference, Ignacio Ambriz mentioned that the two wins they have achieved at the start of the Liga MX will have to be taken in stride within the Mexiquense squad, as overconfidence could cost them dearly. Likewise, he said that it will be important to continue working hard and consistently if the team wishes to become champion in the competition.
9:28 PM25 days ago

KNOW IT HAS NOT BEEN A GREAT START TO THE TOURNAMENT

Sebastián Cáceres knows that América has not had the best start to the season, but he is confident that they can recover.
"The team is doing very well because even though we have not been able to win, we have played good games in the sense that we could have achieved more. Maybe it was a lack of luck or not taking advantage of situations. In soccer sometimes you win and sometimes you lose. We have to adjust details to be able to win," he said.
9:23 PM25 days ago

The América Eagles will play three high-level friendly matches when they face Chelsea of England this weekend, then face Manchester City and finish with a match against the current European champions, Real Madrid.
9:18 PM25 days ago

HOW DID AMÉRICA FARE LAST MATCHDAY?

For their part, América's Eagles visited Rayados de Monterrey at the BBVA Stadium. In a dream debut for Jonathan "Cabecita" Rodríguez as Azulcrema's goal scorer, the eagles suffered despite showing good things throughout the match, as the Monterrey-based team managed to win at home and inflict their first defeat of the tournament on the Coapa team.
9:13 PM25 days ago

HOW DID TOLUCA FARE LAST MATCHDAY?

The team coached by Ignacio Ambriz received the two-time champions Atlas at the Estadio Nemesio Diez. In the first 15 minutes of the match, the Devils had already scored three goals and it seemed that the Mexicans would go for more in the rest of the match, however, the red-and-black team got up to make the score 3-2 and came within one play of tying the match. In the end, it was Toluca who came away with the victory to take the overall lead.
9:08 PM25 days ago

The wait is over, Liga MX action is back with the start of Matchday 3 of the Apertura 2022 Tournament. The Eagles of América will host the Red Devils of Toluca at the Coloso de Santa Úrsula, on the one hand América needs to start getting three points, but on the other hand, they will face the Devils who are the general leaders and want to continue in the same way, now setting the Azteca's turf on fire.
9:03 PM25 days ago

Do not miss a detail of the match with the live updates and commentaries of VAVEL. Follow along with us all the details, commentaries, analysis and lineups for this America vs Toluca match.
8:58 PM25 days ago

What time is America vs Toluca match for Liga MX game?

This is the start time of the game America vs Toluca of 13th July in several countries:

Watch out for this Toluca player:

For this match, the player to watch will be Fernando Navarro, the newly devilish midfielder who has arrived to reinforce the devils in this tournament. Fernando Navarro has become one of the most promising players in the midfield, and he was one of the players that the board worked hard to bring in, so we will have to keep an eye on him throughout the 90 minutes. 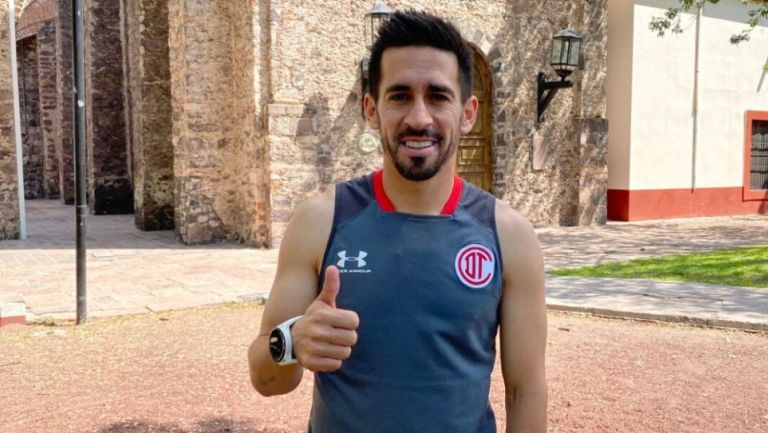 For this match, the player to watch for the Eagles will be Jonathan "Cabecita" Rodríguez. The Uruguayan arrived as a bomb signing to América after having lived a dark period in Arabian soccer and a fruitful one with Cruz Azul where he stood out for being a real goal scorer in Liga MX, now, after making his debut with América, he will try to be again the master and lord goal scorer of the championship to lead the eagles to the top of the general classification. 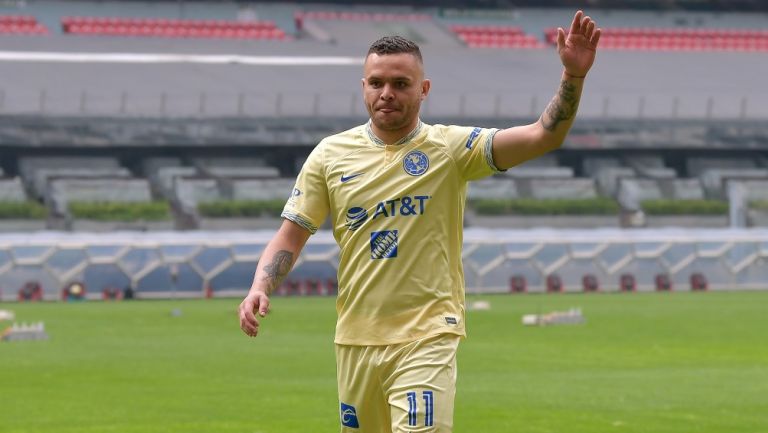 América and Toluca have faced each other on a total of 53 occasions (17 wins for América, 20 wins for Toluca and 16 draws) where the advantage is in favor of the team from Mexico, likewise, in goals, it is the team of the devils who has the advantage with 84 goals scored over 79 azulcremas. Their last meeting dates back to matchday 11 of the Clausura 2022 Tournament where América defeated Toluca 3-0 at the Azteca Stadium.
8:28 PM25 days ago

Estadio Azteca is a soccer stadium located in Mexico City, with a capacity for 87,000 spectators, making it the largest in Mexico, the second largest in America and the seventh largest in the world.  It was designed by architects Pedro Ramírez Vázquez and Rafael Mijares Alcérreca, and its construction began in 1962 as part of the project to host the 1970 World Cup. It was inaugurated on May 29, 1966 with a friendly match between América and Torino, which ended in a 2-2 draw. The first goal was scored by America's player Arlindo dos Santos.

It is the only stadium that has hosted two FIFA World Cup finals, in the Mexico 1970 and Mexico 1986 championships. The first final saw the consecration of Pelé as the "king" of soccer, and the second saw the consolidation of Diego Armando Maradona as a historic figure of world soccer.

To set the Azteca on fire

The Toluca Devils are demonstrating match by match the great trick with which they were assembled in the transfer market and are currently dominating the Mexican league to their liking and want to be at the top of the general table. Likewise, they are currently the highest scoring team in the tournament, having scored three goals in their two matches; however, they are still suffering on the defensive end, as on two occasions they have struggled to keep their lead and avoid being tied. Toluca played very good soccer against Querétaro in matchday 1, debuting their reinforcements with a great performance, for matchday 2, Toluca dented the champion's crown after beating them 3-2 and starting the first 45 minutes with maximum intensity, scoring 3 goals in 15 minutes and demonstrating their great offensive power, now, the third challenge will be to beat Club América at home and with their people.
8:18 PM25 days ago

To take flight in their sacred temple

The Club América Eagles lost last week against Rayados de Monterrey in the Sultana del Norte, however, despite the defeat, they left a great taste in their mouths because their reinforcements, such as Cabecita Rodríguez, made his debut as a Azulcrema goal scorer and made it clear that now he is in charge of the América offense. América will be very dangerous every time they try to reach their opponents' goal. Likewise, they have shown a great level of play as a team, however, the three points have not yet arrived and what better way to start than by winning at their soccer temple, the Coloso de Santa Úrsula. Likewise, it is worth remembering that América is still without a win in this Apertura 2022, so for this match they are obliged to get a victory after having tied in their debut and having lost in the last matchday, taking into account that they will be playing at home, which should play in their favor for this match.
8:13 PM25 days ago

Liga MX is back with all the action and excitement of every tournament, in this tournament kick-off the teams only had a month to prepare to start a new adventure called Apertura 2022, a championship that will have a high intensity without rest from now until November, so this time the teams will have to give 100% at all times to win the championship at the end of the road. For this matchday 3, the América Eagles, who already have their reinforcements at 100% ready to make their debut at home, will be looking for their second victory of the championship, however, they will face a Toluca team that has put together an attacking and defensive team to go all out for the title of this Apertura 2022 Tournament and once and for all put a blow on the table by getting one more star in the club's trophy cabinets.
8:08 PM25 days ago

The America vs Toluca match will be played at the Estadio Azteca, in Mexico City, Mexico. The kick-off is scheduled at 22:00 pm ET.
8:03 PM25 days ago

Welcome to VAVEL.com’s LIVE coverage of the 2022 Liga MX Match: America vs Toluca!

Diaz, Zelarayan lift Columbus in 3-2 win over NYCFC 10 hours ago