Thank you here for your audience in this opening match of the Primeira Liga. A good night and see you next time!

Benfica returns to the field on Tuesday (9), when he visits the Midtjylland, for the pre-Champions League. Arouca play on Monday (15), when they receive Gil Vicente.

Benfica thrash Arouca in the first round of the Primeira Liga and get a head start on the table!
5:08 PM4 days ago

In the cross coming from the right, the ball arrived in Rafa Silva at the edge of the small area to arrive kicking and sending the ball into the back of the goal!
5:05 PM4 days ago

Now confirming two yellows. The first for Weigl, for a foul in midfield and the second for Rafa Silva, for pushing the Arouca defender in the attack field.
5:00 PM4 days ago

At the back cross Yaremchuk came knocking, but sent it over the goal.
4:55 PM4 days ago

Weigl took a chance from outside the box and sent it over the goal.
4:52 PM4 days ago

Substitution in Arouca: Busquets left and Soro came in.
4:45 PM4 days ago

Double substitution in Benfica: Florentino Luís and Gilberto left for Weigl and Bah.
4:40 PM4 days ago

Antony hit it from outside the area and sent it into the hands of Vlachodimos.
4:26 PM4 days ago

Gonçalo Ramos makes the first touch on the ball and it rolls into the second half of the match!
4:26 PM4 days ago

The teams return to the pitch for the second half of the match! And there was a triple substitution at Arouca: Alan Ruiz, Arsenio and Mújica left the field to enter Milovanov, Bukia and Rafael Tavares.
4:15 PM4 days ago

Benfica calmly wins the opening match in the Primeira Liga against Arouca!
4:10 PM4 days ago

Gilberto's right-footed run, the full-back crossed and Gonçalo Ramos deflected it behind, where Enzo Fernández arrived shooting to increase the score even more!
4:07 PM4 days ago

Grimaldo took the free-kick and sent it over the barrier, hitting the net from the outside, on the right!
4:05 PM4 days ago

Rafa Silva received the pass from David Neres, took off and was brought down by Quaresma, who received a yellow card for the foul on the edge of the area. However, the referee was called to the VAR, reviewed the play and gave him a red card!
4:01 PM4 days ago

In a steal of the ball Rafa Silva invaded the area and tried to pass, the ball went up and Gonçalo Ramos headed, hitting the crossbar and the ball coming back to Rafa Silva to head and send the ball to the bottom of the goal!
3:57 PM4 days ago

Grimaldo crossed low, the ball deflected off the defense and went into the hands of Arruabarrena, who kept the ball.
3:52 PM4 days ago

Benfica changes: João Mário goes out and Chiquinho comes in.
3:48 PM4 days ago

David Neres, on the right, invaded the area and tried to shoot, but the ball was blocked and deflected off his own striker, going out.
3:26 PM4 days ago

Grimaldo, in the first descent down the left, crossed in the area and Gilberto got the header, sending it into the net, in the first goal of the season in Portugal!
3:21 PM4 days ago

Enzo Fernández hit the free-kick and hit the barrier.
3:20 PM4 days ago

Gonçalo Ramos was brought down on the edge of the area and has already won a dangerous foul for Benfica to beat, besides the yellow for Opoko, for the strong foul!
3:19 PM4 days ago

Mújica takes the first touch on the ball and it rolls into the first leg of the first match of the season in Portugal!
3:15 PM4 days ago

The teams appear on the field to start the match!
3:10 PM4 days ago

The first round of the competition started today and will end only on Monday. This game is isolated in the round, with tomorrow having Rio Ave x Vizela, Estoril x Famalicão and Porto x Marítimo.

The players take to the field to begin their warm-up exercises.
2:55 PM4 days ago

Arouca is scheduled for the match and will field: 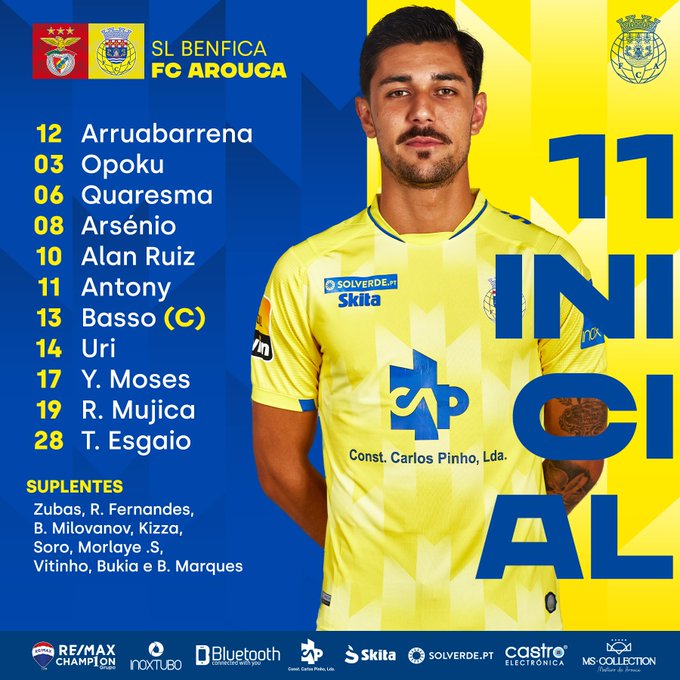 Benfica is scheduled for the match and will field: 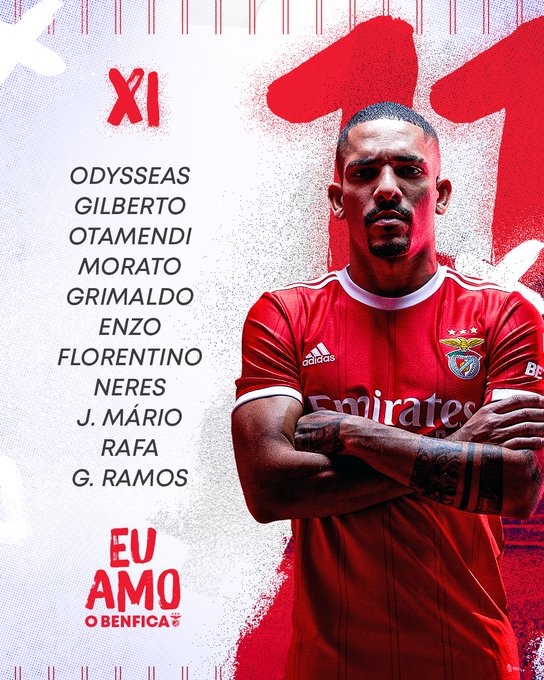 We now begin the broadcast of the opening match of the Primeira Liga, with the ball rolling in 1 hour!

Do not miss a detail of the match with the live updates and commentaries of VAVEL. Follow along with us all the details, commentaries, analysis and lineups for this Benfica vs Arouca match.
2:35 PM4 days ago

How to watch Benfica vs Arouca Live in TV and Stream

If you want to watch the game Benfica vs Arouca live on TV, your options is: none.

What time is Benfica vs Arouca match for Primeira Liga?

This is the start time of the game Benfica vs Arouca of 5th August 2022 in several countries:

Manuel Mota will be the match referee, with Nuno Eiras and Jorge Fernandes as assistants. Vasco Santos will be in charge of VAR.
2:20 PM4 days ago

Benfica comes to the opening match of the Premier League with full strength, as well as Arouca, which also has no defections.
2:05 PM4 days ago

Benfica finished the 21-22 Primeira Liga season with 74 points, staying in third place, nine points above Braga and 11 below Sporting, the runner-up. Arouca was in 15th place with 31 points, just two above Moreirense, the first team inside the relegation zone.
2:00 PM4 days ago

Arouca, on the other hand, played three friendly matches, where they had three distinct results. The defeat came first, to Braga, 3-2 on July 12. After that Arouca beat Feirense, 1-0, on the 20th. Finally, on Saturday (23), Arouca drew 0-0 with Chaves.
1:55 PM4 days ago

Benfica comes into the match on the back of three wins in recent matches. Against Girona, on Friday (22), Benfica won 4-2. Against Newcastle, on Tuesday (26) Benfica made the last pre-season friendly, beating the English by 3-2. After that, last Tuesday (2), Benfica thrashed Midtjylland 4-1 in the first leg of the third qualifying round of the Champions League, with goals from Gonçalo Ramos, who scored three in the match, and one from Enzo Fernandez, while Sisto pulled one back.
1:50 PM4 days ago