Thank you here for listening to this Premier League match. Have a nice day and see you next time!

United return to the field on Saturday (13), when they visit Brentford. Brighton, on the other hand, will play on the same day against Newcastle.

With goals in the first half Brighton surprises, beats United away from home and takes the first three points of the season!

Brighton substitution: Welbeck out, Undav in.
10:51 AM2 months ago

United pressed, but without success in the shots. We now go into extra time, which will be five minutes.
10:49 AM2 months ago

Triple substitution at United: Sancho, Shaw and Bruno Fernandes left to enter Elanga, Malacia and Garnacho. At Brighton March left and Calwill came in.
10:36 AM2 months ago

United substitution: McTominay out, Van de Beek in.
10:34 AM2 months ago

Double substitution at Brighton: Lallana and Trossard left to enter Lamptey and Mwepu.
10:33 AM2 months ago

Dalot received on the left, took to the middle and hit hard, but Sánchez sprawled away and saved Brighton. On the counter-attack Shaw was yellow carded for a foul.
10:28 AM2 months ago

In the corner kick Sánchez came out wrong, did not remove the punch and the ball was dripping in the middle of the area, where Maguire disturbed MacAllister to remove he put against his own goal!
10:28 AM2 months ago

Eriksen got his shot off and Sánchez saved it, with the defense sending it for a corner.

From a cross from the right, Rashford managed to get a shot in, but it went wide of the goal!
10:19 AM2 months ago

Cristiano received the ball on the right, took off and crossed for Rashford to arrive alone, but Sánchez saved Brighton with his feet!
10:12 AM2 months ago

Maguire and Trossard were yellow-carded for a fight in midfield. And after that there is a substitution at United: out went Fred and in came Cristiano Ronaldo.
10:07 AM2 months ago

Trossard got a cross into the box and Welbeck headed over the goal.
10:04 AM2 months ago

Rashford takes the first touch and we have the ball rolling at Old Traffortd for the second half of the match!
10:04 AM2 months ago

The teams take the field for the second half!

With two goals from Gross, Brighton is beating Manchester United at Old Trafford in the first half!
9:41 AM2 months ago

On the right March managed to get the ball, took it to the middle and hit it hard, with De Gea deflecting it to the middle of the area, where Gross was to put the ball in the back of the goal!
9:31 AM2 months ago

Welbeck received the pass inside the area and crossed to the back, where Gross arrived knocking and sending it into the back of the goal!
9:26 AM2 months ago

Yellow for McTominay, for a foul in the field of attack.
9:24 AM2 months ago

Eriksen received the ball inside the box and hit it weakly into the hands of Sanchez.
9:08 AM2 months ago

Bruno Fernandes, on a cross coming from the right, arrived shooting and shot over the goal!
9:00 AM2 months ago

Welbeck takes the first touch and the ball is rolling at Old Trafford for the first round of the new Premier League season!
8:57 AM2 months ago

The first round began on Friday (5), with Arsenal's 2-0 win over Crystal Palace. The round followed yesterday, with Fulham drawing 2-2. After that Bournemouth beat Aston Villa 2-0, as did Newcastle beat Nottingham Forest.

The players take to the pitch to start warming up.
8:30 AM2 months ago

Brighton is lined up and will take the field with: 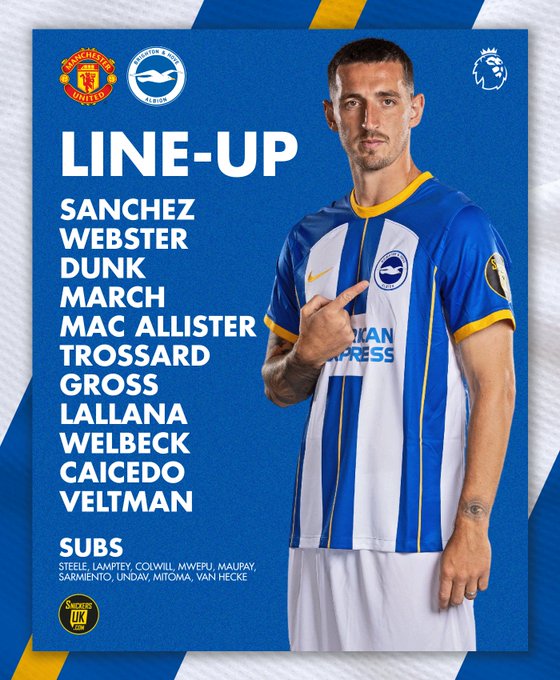 Manchester United is lined up and will take the field with:

And today we're going to the Premier League! In the first round of the competition the ball rolls in 1h for Manchester United and Brigthon!

Do not miss a detail of the match with the live updates and commentaries of VAVEL. Follow along with us all the details, commentaries, analysis and lineups for this Manchester United vs Brighton match.
8:10 AM2 months ago

If you want to watch the game Manchester United vs Brighton live on TV, your options is: none.

If you want to directly stream it: Streaming services and Peacock, SiriusXM FC app.

What time is Manchester United vs Brighton match for Premier League?

This is the start time of the game Manchester United vs Brighton of 7th August 2022 in several countries:

Paul Tierney will be the match referee, with Constantine Hatzidakis and Neil Davies at the flags. John Brooks will be in charge of VAR.
7:55 AM2 months ago

The probable Brighton team for the match is: Sanchez, Veltman, Dunk, and Webster; Lamptey, Mwepu, Gross, and March; MacAllister, Welbeck, and Trossard.
7:50 AM2 months ago

Martial is the only one missing from the match, due to injury. With that exception, both Erik Ten Hag and Graham Potter are absent.
7:40 AM2 months ago

In the 21-22 season Manchester United closed the competition with 58 points, 11 behind Arsenal and two above West Ham, finishing in sixth position. Brighton were ninth with 51 points, tied with Wolverhampton, two above Newcastle and one below Leicester.
7:35 AM2 months ago

Manchester United comes into the match on the back of six friendlies. The first, on the 12th, was a 4-0 win over Liverpool. Three days later the came another thrashing, 4-1, over Melbourne Victory. After that United played on the 19th and beat Crystal Palace 3-1. On Saturday (23) United drew 2-2 with Aston Villa and on Saturday (30) United were defeated by Atleti 1-0. And on Sunday (31) United drew 1-1 with Rayo Vallecano.
7:25 AM2 months ago