Thank you here for your audience in this pre-Champions League match. Have a good afternoon and see you next time!
4:42 PM2 months ago

Rangers look to turn the score on aggregate, eliminate Union and go through in the Champions League, going to the last knockout stage before the group stage!
4:36 PM2 months ago

And Morelos was yellow carded for a strong foul.
4:32 PM2 months ago

Rangers Substitution: Lawrence out, Kamara in. In the Union left Lynen and entered Puertas.
4:28 PM2 months ago

Union substitution: Sykes is out for Ayensa.
4:26 PM2 months ago

Tillman was able to finish the ball from the right side of the box and send it into the back of the net!
4:22 PM2 months ago

Substitution in the Union: Neuwkoop left and François came in.
4:20 PM2 months ago

Yellow for Lazare, for a strong foul in the midfield.
4:09 PM2 months ago

Rangers Substitution: Arfield out, Matondo in.
4:05 PM2 months ago

Tavernier received the ball on the right and played it into the middle, where Lundstram got the shot, but Moris sprawled and the ball was left in the middle of the area for Colak to tap into the back of the goal!
3:50 PM2 months ago

Andigra gives the first touch and the ball rolls into the second half of the match!
3:50 PM2 months ago

With a goal by Tavernier, the Rangers take the lead against the Union and look for the second goal to take the match to overtime!
3:32 PM2 months ago

Tavernier calmly took it, in the left corner, with Moris coming out to the right, opening the score of the match!
3:32 PM2 months ago

In a lift in the area the ball caught the arm of the defender who was fighting with Tillman, making the maximum penalty!

Double yellows now, one for Tillman for a foul in the attack field and one for Sykes for complaining.
3:25 PM2 months ago

For a foul in the midfield Sands was yellow carded, the first of the game.
3:20 PM2 months ago

Lawrence now took a chance from outside the box and sent the ball through the left side of the goal!
3:15 PM2 months ago

In another free-kick taken in the area by Lawrence, Colak managed to get a strong header, and Moris sprawled over the goal!
3:06 PM2 months ago

From a corner kick taken in the box Van der Heyden got the header and sent it to the left side of the goal!
2:56 PM2 months ago

Tavernier lifted the ball into the box and Colak managed to head the ball away, but over the goal!
2:52 PM2 months ago

From a corner kick coming from the left Arfield managed to get a header, but it went over the goal.
2:47 PM2 months ago

Colak makes the first touch on the ball and it rolls into the first half!
2:47 PM2 months ago

The Champions round starts today and ends today. Earlier Zalgiris drew 1-1 with Bodo Glimt and the visitors went through. At the moment we have the other games going on, with: Plzen 2x1 Sheriff, Apollon 2x0 Maccabi Haifa, Pyunik 0x2 Red Star, Midtjylland 0x1 Benfica, Dinamo 1x0 Ludogorets and Ferencvaros 0x1 Qarabag. Before the ball starts rolling in this match, we will have the start of Sturm-Dynamo and PSV-Monaco.
2:25 PM2 months ago

The players take to the field to begin their warm-up exercises.
2:20 PM2 months ago

Union is lined up and will play with: 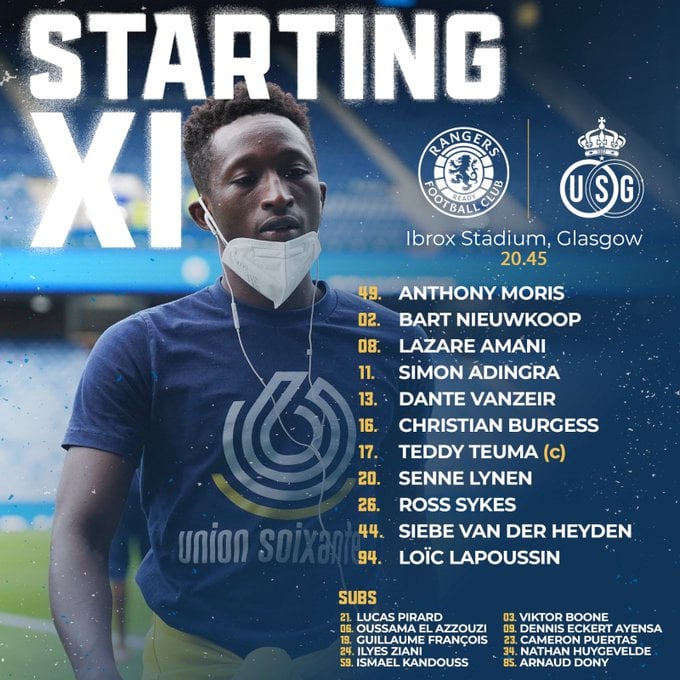 Rangers is lined up and will play with: 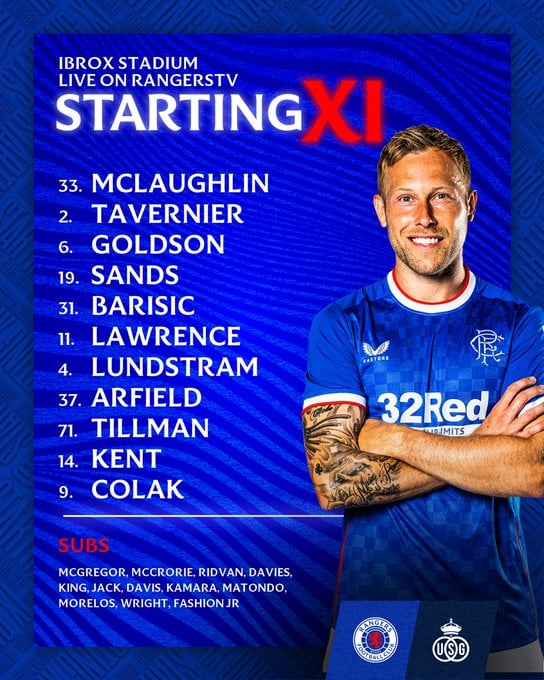 We now begin the broadcast of the Champions League pre-qualifying round match between Rangers and Union!

Do not miss a detail of the match with the live updates and commentaries of VAVEL. Follow along with us all the details, commentaries, analysis and lineups for this Rangers vs Royale Union match.
2:00 PM2 months ago

How to watch Rangers vs Royale UnionLive in TV and Stream

If you want to watch the game Rangers vs Royale Union live on TV, your options is: none.

If you want to directly stream it: Streaming services and Rangers TV app.

What time is Rangers vs Royale Union match for Champions League?

This is the start time of the game Rangers vs Union of 9th August 2022}} in several countries:

With the whole team coming from Greece, Tasos Sidiropoulos will be the referee of the match, with Polychonis Kostaras and Lazaros Dimitriadis at the flags, and Agelos Evangelou in charge of VAR.
1:45 PM2 months ago

Rangers will have no absentees for the match, while Union will have the return of Sykes, who missed the last match.
1:30 PM2 months ago

In the Scottish League, Rangers have six points so far, tied with Celtic for second place, and are two points above Hearts and Hibernian. In the Belgian League, Union has four points so far, and is in 11th place, tied with Zulte, Brugge, Standard Liege and Kortrijk.
1:25 PM2 months ago

In the Belgian Pro League, Royale Union opened the season by beating Charleroi 1-0 on Friday (29th), with a goal from Sykes. Then, on Saturday, they lost 3-0 to Mechelen, who scored with Schoofs, Lazare (own goal) and Ngoy.
1:20 PM2 months ago

In the Scottish Premiership, Rangers opened the season beating Livingston 2-1 on Saturday, with goals from Nouble for Livingston, while Arfield and Tavernier turned the match around. And the following Saturday, Rangers beat Kilmarnock 2-0, with goals from Colak and Morelos.
1:15 PM2 months ago

The first leg took place on Tuesday (2), when Union beat Rangers 2-0 at Den Dreef Stadion, with Teuma scoring in the first half and Vanzeir in the second.
1:10 PM2 months ago