Thank you for listening to this latest Libertadores match here on VAVEL. Have a good night and see you next time!

Athletico will now face Palmeiras in the semifinal. The first leg will be on August 30, at the Arena da Baixada, and the return leg will be on September 6, at Allianz Parque.
10:30 PM2 months ago

With a goal by Vitor Roque, just 17 years old, Athletico wins against Estudiantes and qualifies in the Libertadores, going to the semifinal of the competition!
10:29 PM2 months ago

Boselli got his shot off and sent it into Bento's hands.
10:27 PM2 months ago

Vitinho had the ball inside the area after a corner kick taken by the defense, and managed to get the cross, where Vitor Roque headed the ball on the division with Andújar and sent the ball into the back of the net, opening the score in the LAST play of the match!
10:21 PM2 months ago

Replacement in Athletico: Alex Santana left and Terans came in.
10:19 PM2 months ago

Méndez received the ball, came face to face with Bento and hit a cross, out! And we will have six more minutes of extra time.
10:19 PM2 months ago

Díaz's strong shot from the right went towards the goal and Bento went with it over the line!

Yellow for Alex Santana, for a foul on the right side of the attack field.
10:16 PM2 months ago

Rollheiser hit the ball from outside the area and sent it over the goal. And confirming that earlier a yellow card for Castro came out.
10:11 PM2 months ago

Double substitution in Athletico: left Fernandinho and Cuello for Erick and Vitinho. For Estudiantes, Díaz and Piatti were out to replace Méndez and Rollheiser.
10:05 PM2 months ago

Substitution in Estudiantes: Godoy out, Boselli in.
10:01 PM2 months ago

In a quickly taken corner Díaz got the shot and sent the ball into the net from the outside! And after that Godoy was yellow carded for a sole in the middle of the field.
9:56 PM2 months ago

Yellow for Zuqui, for a hard tackle in the attack field.
9:55 PM2 months ago

At the corner kick, Lollo managed to get a header and hit the right post, with the ball going back to Zuqui to hit the back of the net! There was a VAR check for an offside on the shot, with a player next to the post, and the referee annulled the goal! After that Andújar was yellow carded for complaining.
9:49 PM2 months ago

Díaz received, pivoted and found Zuqui, who shot over the goal, with deviation, for out!
9:48 PM2 months ago

Yellow for Pablo, for a strong arrival in the field of attack.
9:40 PM2 months ago

Cuello, already inside the area, managed to get a high shot, but it went to the left side of the goal!
9:34 PM2 months ago

Díaz makes the first touch and the ball is rolling for the decisive 45 minutes of the last quarterfinal match!
9:34 PM2 months ago

Team on the pitch!

Without changes, Estudiantes and Athletico return to the field to start the second half.

Without goals, the first half ends in La Plata and if the situation continues we will have maximum penalties!
9:15 PM2 months ago

In a free-kick from very far away crossed in the area, Morel deflected and Bento sprawled over the goal! In the corner Morel got the header and sent it over the goal!
9:03 PM2 months ago

Díaz got the play, crossed to the area where the defense didn't take well and Morel got the shot, but sent it to the left side of the goal!
8:59 PM2 months ago

Yellow for Pedro Henrique, for a hard tackle on the Argentinean striker.
8:47 PM2 months ago

Fernandinho took off and was brought down on the edge of the area, earning a foul that could lead to danger. Khellven hit it straight at the goal, and Andújar sprawled!
8:37 PM2 months ago

Godoy crossed in the area and Castro was ahead of the defender, managing to get the deflection, but sending it through the right side of the goal!
8:31 PM2 months ago

Zuqui took a chance from outside the area and sent it into the hands of Bento.
8:29 PM2 months ago

Pablo makes the first touch on the ball and it rolls into the first leg of the decider!
8:25 PM2 months ago

Under fireworks, a party with shredded paper and "war" sirens, the teams take to the field to start the match!

This is the last game of the quarterfinal round. On Tuesday, Flamengo beat Corinthians 1-0, closed the aggregate 3-0 and moved on to the semis, where they will face Vélez, who beat Talleres 1-0, closing the aggregate 4-2. Palmeiras drew 0-0 with Atlético-MG after a 2-2 draw in the first leg and went through to the semis on penalty kicks, winning 6-5.
8:13 PM2 months ago

Athletico came through group B with 10 points, tied with leaders Libertad. In group C Estudiantes was the leader, with 13 points, followed by Vélez, who scored eight points.

CONMEBOl releases an artwork with the starting lineups for both teams! 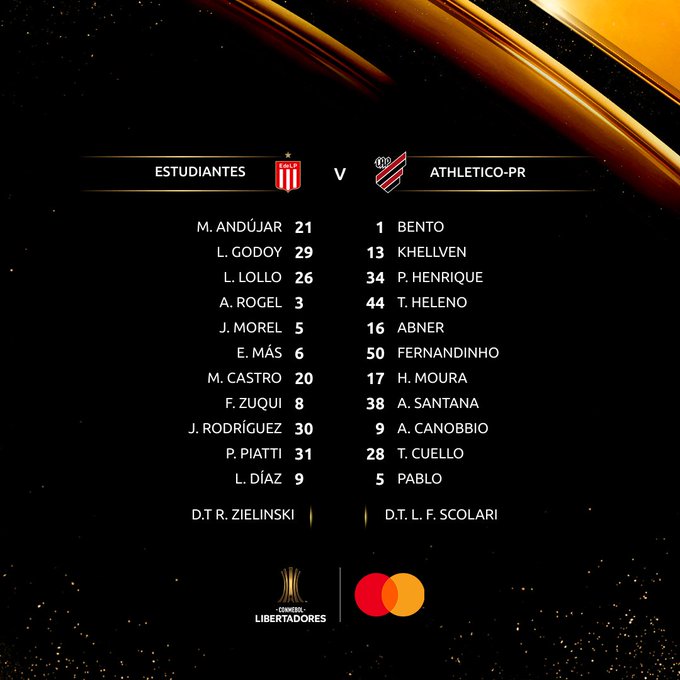 The players go up to the pitch to start warm-up work.
7:48 PM2 months ago

This was how Estudiantes arrived at the stadium for the match, with all the celebration possible from the fans!

Estudiantes is lined up and will take the field with:

Athletico is lined up and will take the field with: 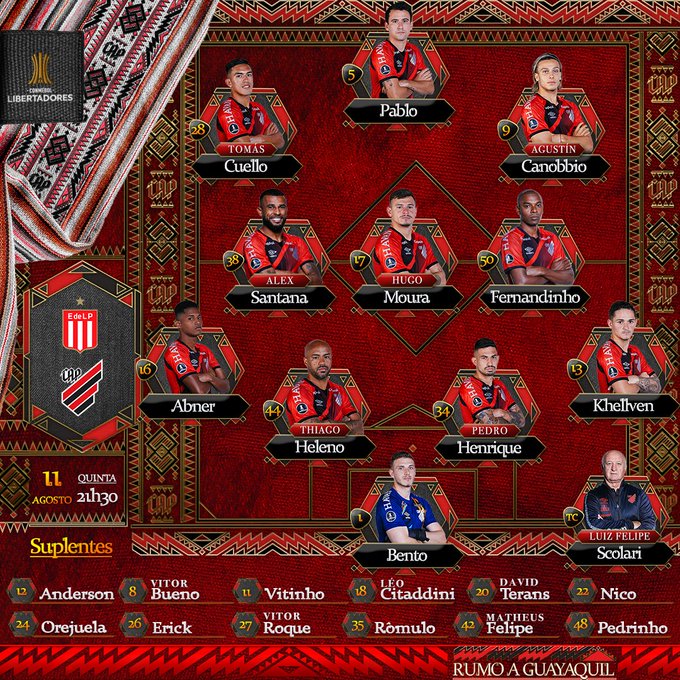 Now begins the broadcast of the match between Estudiantes and Athletico, in the quarterfinal round of the Copa Libertadores!

Do not miss a detail of the match with the live updates and commentaries of VAVEL. Follow along with us all the details, commentaries, analysis and lineups for this Estudiantes vs Athletico-PR match.
7:31 PM2 months ago

How to watch Estudiantes vs Athletico-PRLive in TV and Stream

If you want to watch the game Estudiantes vs Athletico-PR live on TV, your options is: none.

What time is Estudiantes vs Athletico-PR match for Copa Libertadores?

This is the start time of the game Estudiantes vs Athletico-PR of 11th August 2022 in several countries:

Esteban Ostojich will be the referee in charge of the match, with Nicolás Taran and Martín Soppi as assistants, and José Burgos as fourth referee. Leodan Gonzalez will be in charge of VAR, with the entire team coming from Uruguay.
7:16 PM2 months ago 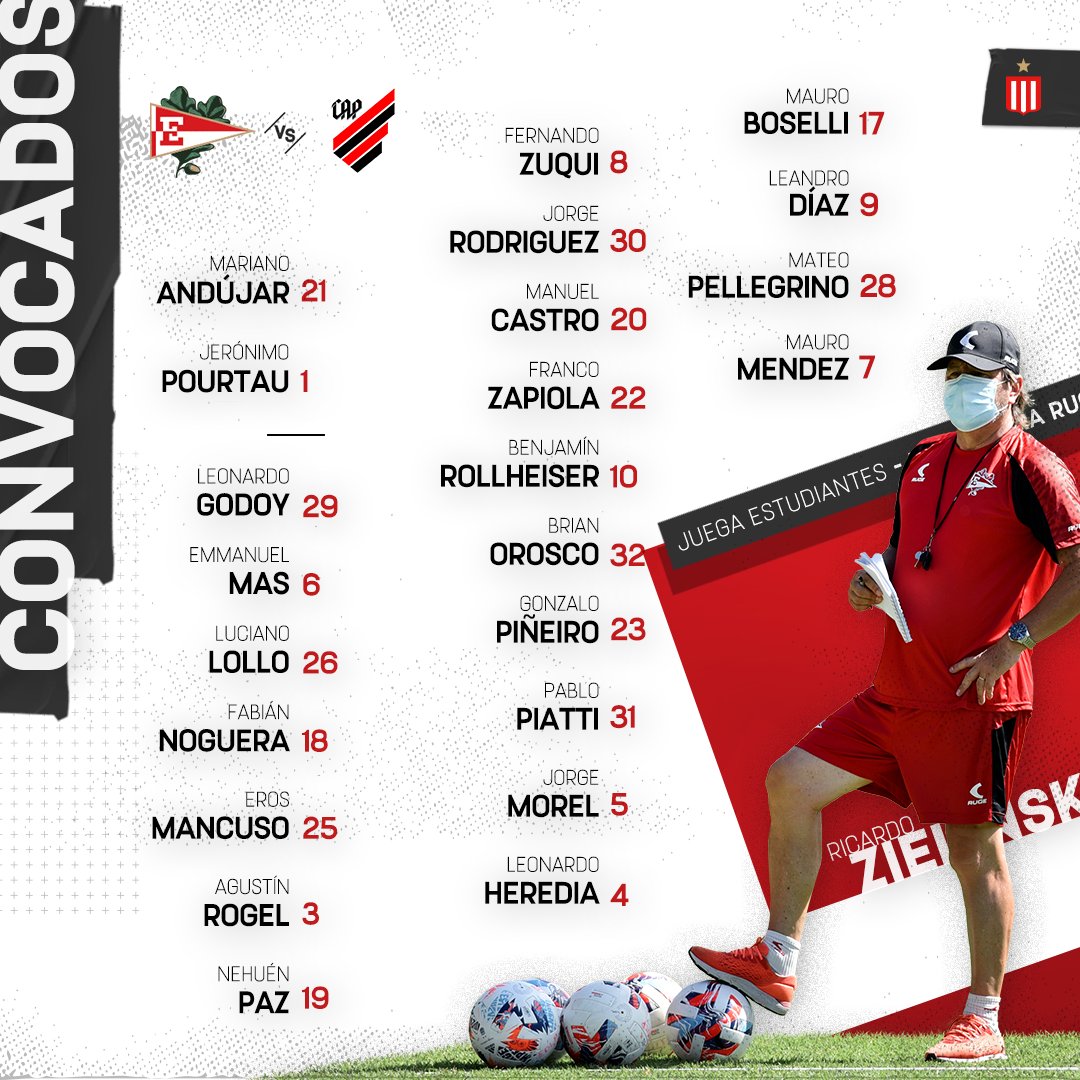 Ricardo Zielinski will be without two players: Fabian Noguera and Ezequiel Muñoz, both injured, while Felipão will not be able to use Julimar, Reinaldo, Marlos and Marcelo Cirino, also injured.
7:01 PM2 months ago

In 12 games in the Argentine Championship, Estudiantes is in 23rd position with 13 points, one point below Defensa y Justicia, Colón, Cordoba, Barracas Central and Rosario, and one point above Tallere. Athletico-PR, in the Brazilian Championship, is in fourth position with 37 points, two below second-place Corinthians, one below Fluminense and one above Flamengo.
6:56 PM2 months ago

Meanwhile, Athletico is on a four-game unbeaten streak. On July 27, in the Brazil Cup, came the goalless draw with Flamengo, away from home. On Sunday (31), the victory was over Sao Paulo, with a goal from Vitor Bueno. And last Sunday (7), the victory was 3-2 against Atlético-MG, with Igor Rabello opening the scoring, Vitor Roque equalizing, Pavón putting Galo in front and Roque equalizing again, while Canobbio, in the last minute, turned the match.
6:51 PM2 months ago

Estudiantes has already gone four games without a victory. On Sunday (7), the tie was a goalless draw with San Lorenzo. Before that, on Saturday, the goalless draw was with Banfield. And on July 24 the defeat came to Boca Juniors, 3-1, which scored with Fernández, Rojo and Villa, while Morel pulled one back.
6:46 PM2 months ago

The first leg, on Thursday (4), last week, the result was scoreless at the Arena da Baixada. With this result, all draws, regardless of goals, take the decision to penalties. Victories, logically, qualify the winner.
6:41 PM2 months ago