THANKS FOR FOLLOWING LIVE ON VAVEL

Thank you for following Chelsea vs Leicester City on VAVEL. Continue to visit the vavel website to keep up to date with what's happening in the world of sport.
10:55 AM5 months ago

The game ends from Stamford Bridge, the Blues win against the Foxes and get their first home win of the season.
10:47 AM5 months ago

THE EQUALIZER CAME UP JUST SHORT! Ayoze Perez hits the crossbar and no one from the Foxes could push the ball home. The blues have been saving
10:44 AM5 months ago

Vardy came close! The Foxes striker got past half the world and faced only Mendy but his attempt ended up wide of the net.
10:27 AM5 months ago

GOOOOOOOOOL FOR LEICESTER CITY! Harvey Barnes hits a shot from the edge of the penalty area and beats Mendy's goal.
10:23 AM5 months ago

GOOOOOOOOOOOOOL FOR CHELSEA! Stearling once again puts on his hero's cape and shoves the ball in at the far post to increase the blues' lead.
10:11 AM5 months ago

SECOND GOAL CLOSE! Chelsea came within a whisker of scoring a second goal, but Stearling hits the post.
10:07 AM5 months ago

CHELSEA GOAL! At the start of the second half, Stearling's chamfered shot goes down like an arrow and into the net. The blues win it already
9:55 AM5 months ago

End of the first half between Chelsea and Leicester City, the blues and foxes tied 0-0.
9:44 AM5 months ago

POST! James bursts the post after grabbing the ball with his left foot and crashing it into the near post defended by Daniel Ward.
9:42 AM5 months ago

Free kick for Chelsea after Daniel Praet runs down Stearling and is cautioned in the game.
9:36 AM5 months ago

The goal was cancelled out at Stamford Bridge. Mendy is fouled by Harvey Barnes and the central defender disallows the Foxes' goal. What a scare for the Blues!
9:31 AM5 months ago

Gallagher is sent off for committing yet another foul on Vardy, who was running clear on goal, but he picks up a double yellow and leaves Chelsea at a disadvantage
9:23 AM5 months ago

Conor Gallagher gets the yellow card after taking down Branes in the middle of the field.
9:14 AM5 months ago

VAR decision! Havertz is offside and the penalty is disallowed.
9:13 AM5 months ago

PENALTY FOR CHELSEA! Loftus-Cheak is fouled by Tielemans inside the box and the Blues have a chance to go ahead in the game.
9:12 AM5 months ago

10 minutes into the game at Stamford Bridge, Chelsea and Leciester are currently playing a very volatile back-and-forth match.
9:08 AM5 months ago

SAVE BY DANIEL WARD! Stearling leaves Loftus-Cheak alone to put the ball into the net but Daniel Ward plays excellent in his area to close the gap and send for a corner.
9:06 AM5 months ago

Corner kick for Leicester City, the Foxes look to surprise the Blues with a corner, who started the game at high speed.
9:01 AM5 months ago

The game between Chelsea and Leicester City kicks off, the blues will be looking to get back to winning ways at Stamford Bridge.
8:44 AM5 months ago

In a couple of minutes we will start with the broadcast of the duel between Chelsea and Leicester City, matchday 4 of the Premier League from Stamford Bridge.
8:41 AM5 months ago

This is Chelsea's lineup to defend their home against the Foxes who are looking to hurt the Blues at home and in front of their own fans.

This is the lineup that the Foxes are sending to face the Blues at Stamford Brigde, Leicester City wants to put a blow on the table today. 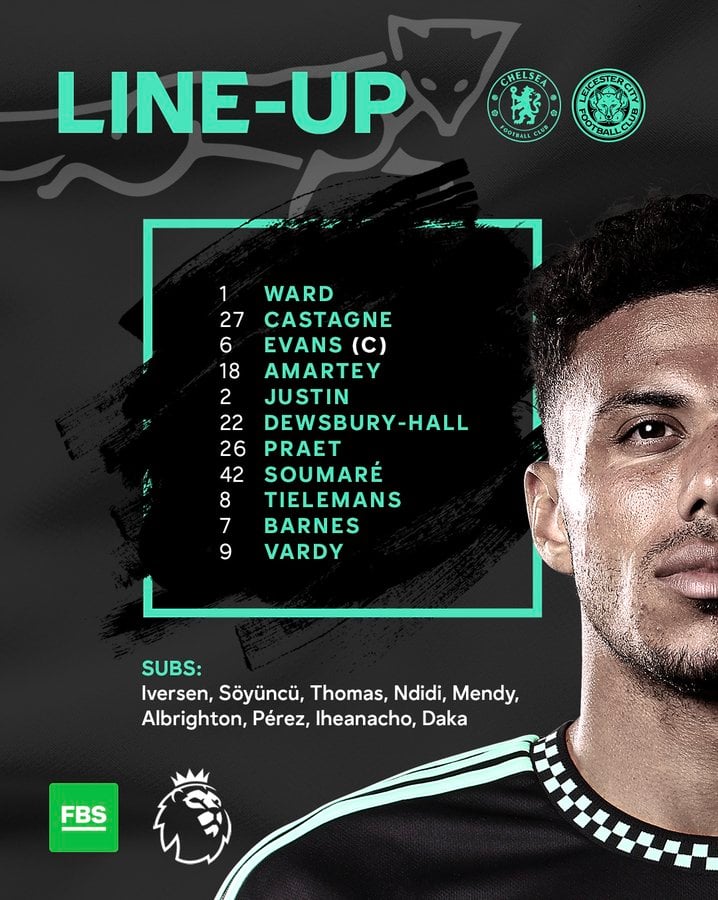 The Foxes are facing one of their worst away streaks in the Premier League as they have only won two of their last 15 matches, averaging 2 wins, 5 draws and 8 defeats, and to make matters worse, they have 27 consecutive matches without being able to keep a clean sheet, conceding a goal in each of them.
8:30 AM5 months ago

THE SCORERS IN THE PREMIER LEAGUE

At the moment the scorers table is dominated by the Spanish Rodrigo Moreno of Leeds United with 4 goals scored, in second place are Aleksandar Mitrovic, Haaland and Wilfried Zaha with 3 goals scored, the third place is followed by Callum Wilson, Che Adams, Gabriel Jesus, Gabriel Martinelli and Harry Kane with 2 goals scored.
8:25 AM5 months ago

POSITIONS IN THE PREMIER LEAGUE

At the moment and surprisingly, Arsenal is leading the Premier League with three rounds elapsed in which it has a total of 9 points and a goal difference of +7, in second place is the champion Manchester City with 7 points, in third place is Leeds United with 7 points, in fourth place Tottenham continues to dominate with the same points as the 2nd and 3rd, finally in fifth place is Brighton.
8:20 AM5 months ago

On the other hand, Chelsea traveled to Elland Road to face Leeds United in another round of Premier League action. However, the blues did not get the desired visit as they had to concede three goals during the 90 minutes and could not score, in addition to receiving the expulsion of new reinforcement Koulibaly, having a hard setback just in this start of the campaign.
8:15 AM5 months ago

On the other hand, the Foxes faced Southampton Saints at the King Power Stadium, however, things did not work out in favor of Vardy and company's team, as the locality was not a factor for Southampton to beat them at home and return to their people with three points in the bag. The match ended 1-2 against and the scorer for Leicester City was James Maddison.
8:10 AM5 months ago

The wait is over in the Premier League, Chelsea receives Leicester City at Stamford Bridge in a match corresponding to matchday 4 of the Premier League of the 2022-23 season. On the one hand, Chelsea faced Leeds United and ended up defeated by a score of 0-3 against, on the other hand, Leicester City lost against Southampton by a score of 2-1 against, having a defeat just like their similar team.
8:05 AM5 months ago

Do not miss a detail of the match with the live updates and commentaries of VAVEL. Follow along with us all the details, commentaries, analysis and lineups for this Chelsea vs Leicester City match.
8:00 AM5 months ago

What time is Chelsea vs Leicester City match for Premier League?

This is the start time of the game Chelsea vs Leicester City of 27th August in several countries:

The player to watch for this match will be the attacking midfielder, Harvey Barnes, the current Offensive Midfielder has been an important piece in this start of the season for Leicester City and he proved it by scoring last match, now, he will look to break the nets again and be the difference that balances the balance in favor of his team. 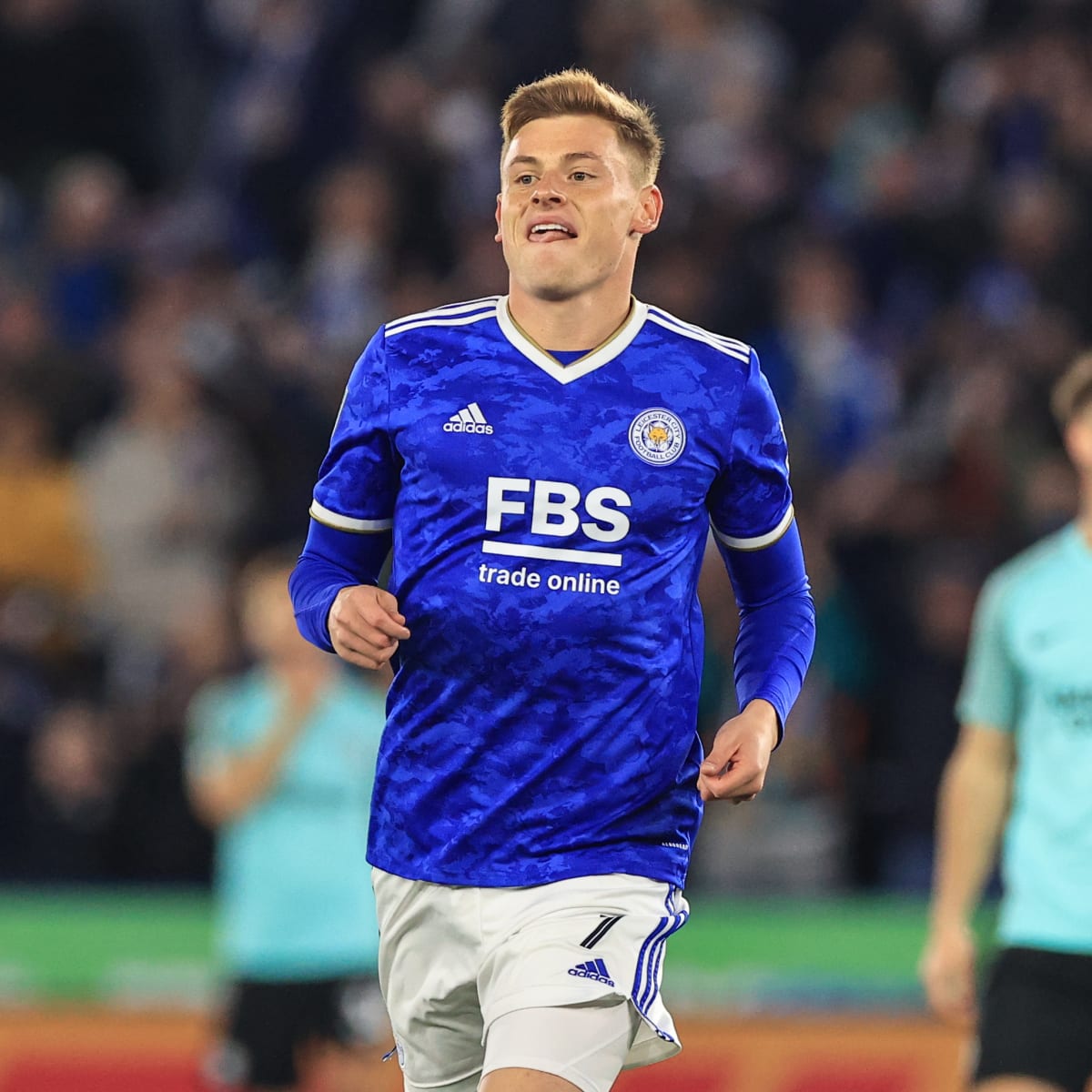 Watch out for this Chelsea player:

For this match, the player to watch will be Stearling. The former Manchester City striker has been a key player in this start of the season for Chelsea, so he will be the key player that fans are looking to have this season and burst the net as many times as necessary to become the Premier League's top scorer. 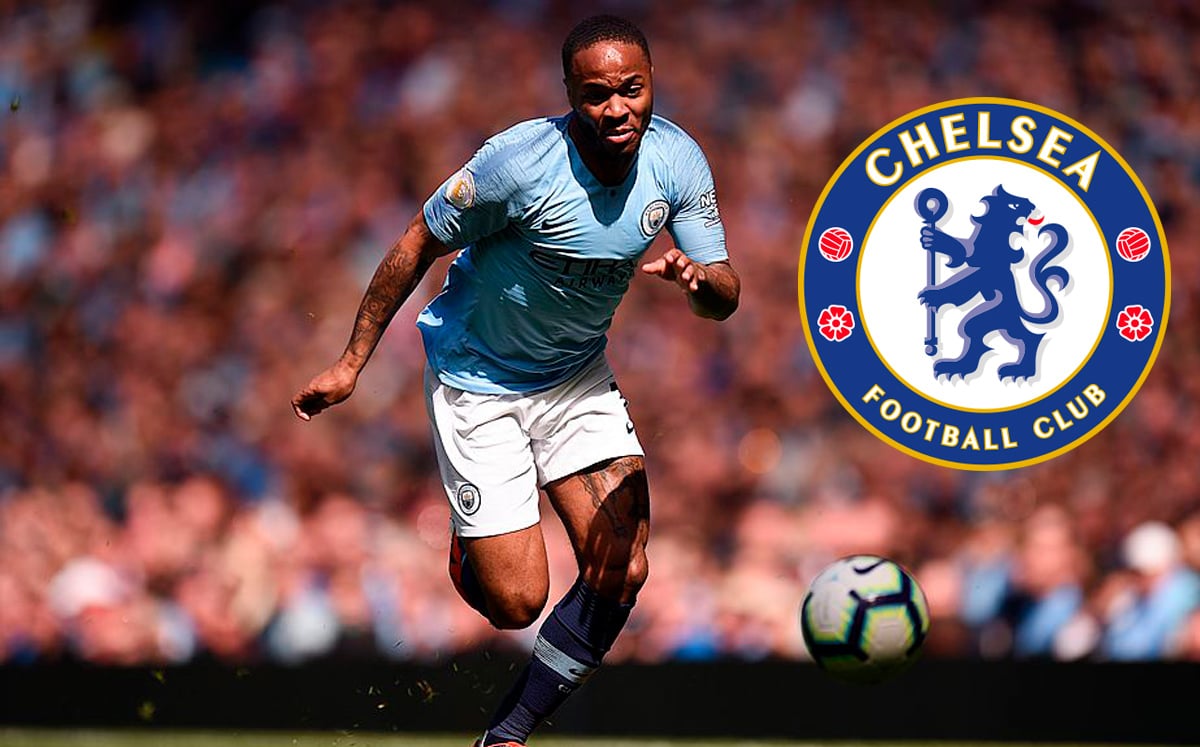 Chelsea and Leicester have met on a total of 122 occasions (59 wins for Chelsea, 35 draws and 27 wins for Leicester City) where the scales are completely tipped in favor of the Chelsea side. In terms of goals, both teams usually score against each other, with 213 goals for Chelsea and 140 for Leicester City. Their last meeting dates back to the 27th Premier League matchday of the 2021-22 season where both clubs drew 1-1.
7:30 AM5 months ago

Stamford Bridge is the home of Chelsea Football Club and is located in the Fulham district of England, its capacity is 41 184 spectators, making it the tenth largest capacity stadium in all of England and the Premier League.

It was inaugurated in 1877 and was initially built to be used by Fulham, but this did not accept, and became the property of the London Athletics Club, which used it until 1905. This club changed its name to what is now known as Chelsea. The stadium has been remodeled numerous times, the most recent being in the 1990s, when it was converted into a modern stadium with individual seats.

The Leicester City team at the moment has had a regular performance at the moment, on day 1 of the Premier League they drew 2-2 with Brentford in an exciting duel against the Bees, then they played against Arsenal and lost game 2 of the season by a score of 4-2, and last day they received Southampton at the King Power Stadium, that game they lost 2-1 against, having only 1 of 9 possible at the moment. Also, in the midweek matchday they managed to advance to the next round of elimination of the Carabao Cup in a penalty shootout, so the Foxes are in need of a win in the league in order to clinch.
7:20 AM5 months ago

Chelsea will return home for another Premier League match after having played last week's away game and suffered a tough 3-goal defeat at the start of the season. However, the Chelsea team is good playing at home since last season they won most of their duels accompanied by their people, and they will look for everything to be the same again. At the moment Chelsea has 1 away win against Everton at the start of the campaign, then a tight 2-2 draw with Tottenham in the London derby and a defeat against Leeds United, so they will be looking to beat Leicester City at Stamford Bridge.
7:15 AM5 months ago

The 2022-23 season kicked off in England, bringing back the best league in the world with it. All clubs, along with 3 new guests, will be looking to achieve great feats throughout this season that will be involved in a modified calendar due to the FIFA World Cup in November. Likewise, the teams will fight for the qualifying places for European tournaments and to be present in the big six of the Premier League, however, the real objective is one; to be crowned as the new champions of England. On this date, the Blues will face the Foxes at the mythical Stamford Bridge, both clubs have had a good start so far this season and will seek to continue with a good pace at the beginning of the Premier League.
7:10 AM5 months ago

The Chelsea vs Leicester City match will be played at Stamford Bridge, in London, England. The kick-off is scheduled at 10:00 am ET.
7:05 AM5 months ago

Welcome to VAVEL.com’s LIVE coverage of the 2022 Premier League:Chelsea vs Leicester City!