Thank you for your audience in this Copa Sudamericana match. Have a good night, and see you next time!

Now in the Copa Sudamericana grand final, on October 1st, São Paulo faces Independiente del Valle in the fight for the continental trophy!
9:40 PM3 months ago

SÃO PAULO IN THE FINAL

GALOPPO HITS THE LEFT CORNER, WITH NO CHANCE OF DEFENSE FOR THE GOALKEEPER AND PUTS SÃO PAULO IN THE FINAL OF THE SOUTH AMERICAN CUP!
9:38 PM3 months ago

Léo Pereira hits the right corner and stamps the right post! 3x2 and comes to the spot in the final the tricolor!
9:37 PM3 months ago

Igor Vinícius hit the right angle, with no chance of defense! 3x2!
9:36 PM3 months ago

Shaylon hit it high into the right corner, tying the match! 2x2!
9:36 PM3 months ago

Baralhas did something pathetic and isolated the ball, sending it over the goal, keeping the score 2-1!
9:34 PM3 months ago

Wellington Rato took the penalty with coolness and sent it in the middle of the goal, with no chance for Felipe Alves! 1x1!
9:32 PM3 months ago

Reinaldo took the first penalty on São Paulo's side and sent it to the left corner, while Renan went to the right. 1x0!
9:25 PM3 months ago

The referee points to the center of the field and friends, we will decide on penalties!
9:23 PM3 months ago

Galoppo hit a hard shot from outside the box and sent it through the right side of the goal!
9:19 PM3 months ago

Substitution in São Paulo: Patrick is out for Juan.
9:16 PM3 months ago

Double substitution in Atlético: Churín and Edson Fernando left for Ricardinho and Shaylon.
9:08 PM3 months ago

Double substitution in the Sao Paulo: left Nestor and Luciano for the entry of Talles Costa and Alisson.
9:01 PM3 months ago

Substitution in Atlético: out went Dudu and in came Hayner.
8:55 PM3 months ago

Yellow for Jefferson, for a foul in the midfield.
8:54 PM3 months ago

Alisson crossed in the area and Patrick anticipated his marker to deflect with his left leg and send the ball into the left corner of Renan's goal, taking the decision to penalties on the spot!
8:49 PM3 months ago

On the right side, São Paulo had a corner kick and Calleri managed to get a header, but it went off the right side.
8:47 PM3 months ago

Due to injury Jorginho left and Léo Pereira came in for Atlético.
8:43 PM3 months ago

Patrick crossed in the area and Alisson headed the ball into the ground, sending the ball over the goal!
8:39 PM3 months ago

In the ball raised in the area the defense took it away and Reinaldo arrived kicking, but sent it to the left side of Renan's goal, with great danger!
8:34 PM3 months ago

Churín makes the first touch on the ball and it rolls into the second half of the match!
8:34 PM3 months ago

The teams return to the pitch for the second half of the match. Both teams are the same as in the first half, with no changes.

São Paulo pressed the whole time and scored the first of the goals they need to qualify for the final, while Atlético held firm and kept the advantage in this first half!
8:15 PM3 months ago

Reinaldo crossed in the area and Calleri headed it, but Renan sent it over the goal from a corner!
8:09 PM3 months ago

Pablo Maia shot from outside the area and sent it into Renan's hands.
7:57 PM3 months ago

Nestor crossed in the box and Calleri's header was deflected, but it went wide of the left side of the goal!
7:50 PM3 months ago

Alisson managed to get a header, but it went over the goal.
7:48 PM3 months ago

And Gabriel Neves felt an injury and was substituted, with Pablo Maia coming in in his place.
7:46 PM3 months ago

A cross in the box was deflected and the defense failed to clear it, and the ball fell to Calleri, who sent it into the back of the net, but the number nine was fouled and the goal was disallowed.
7:42 PM3 months ago

Luciano risked a shot from outside the area, and Renan deflected it over the goal!
7:36 PM3 months ago

Luciano managed to get a shot off from inside the box with the defense clearing before this shot. Then Renan sprawled and, on the rebound, Patrick put it into the back of the net!
7:30 PM3 months ago

Calleri gets the first touch on the ball and it rolls into the first half of the match!
7:25 PM3 months ago

The teams take the field to start the match!
7:12 PM3 months ago

The path to semifinals

In the group stage, São Paulo went through group D with 16 points, five ahead of Everton, 12 above Ayacucho and 14 above Jorge Wilstermann. Atlético went through group F with 13 points, two ahead of LDU, seven ahead of Antofagasta and nine ahead of Defensa y Justicia. In the round of 16 Sao Paulo beat Universidad Catolica 4-2 in the first round and 4-1 in the second round. Atlético was beaten 2-0 away by Olimpia and won 2-0 at home, going through 5-3 on penalties. Finally, São Paulo eliminated Ceará in the quarterfinals, winning the first leg 1-0, losing the return leg 2-1, and going through on penalties 4-3. Atlético-GO beat Nacional 1-0 away and 3-0 at home to advance to the semifinals.
6:53 PM3 months ago

The players appear on the field to begin their warm-up work.
6:46 PM3 months ago

Atlético-GO is lined up and will take the field with: 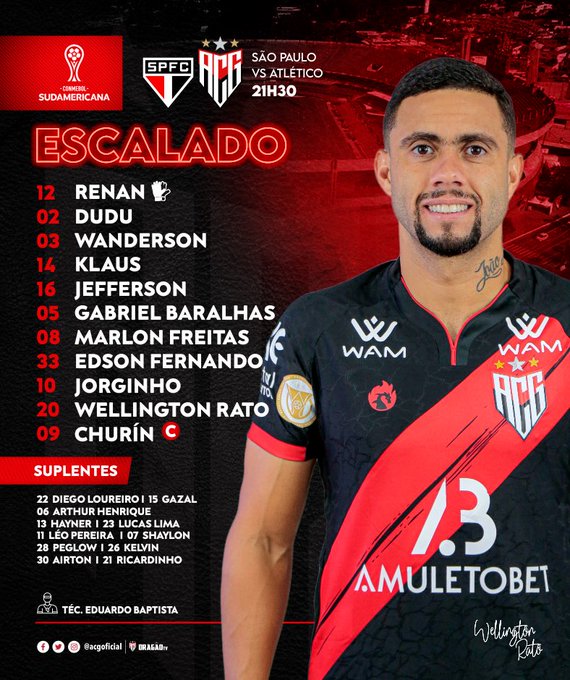 São Paulo is lined up and will take the field with: 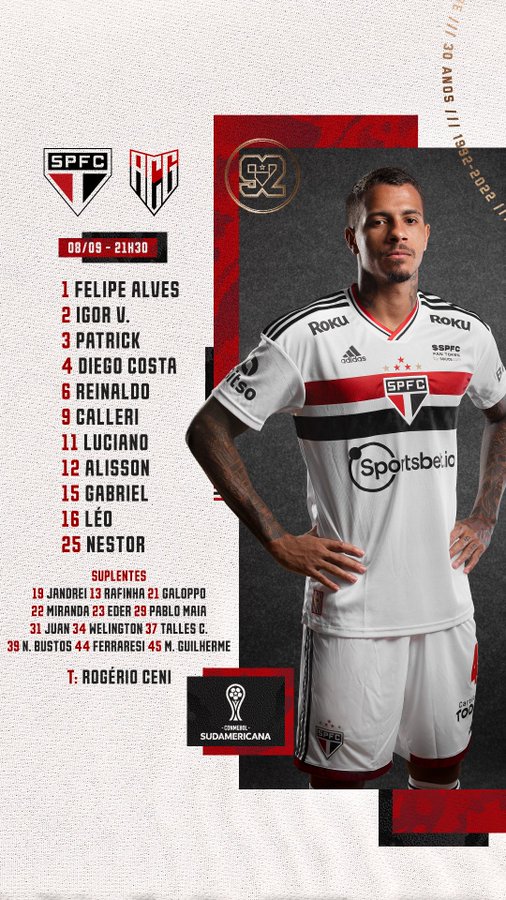 Now begins the broadcast of the match between São Paulo and Atlético-GO, in the second leg of the Copa Sul-Americana semifinal!

Do not miss a detail of the match with the live updates and commentaries of VAVEL. Follow along with us all the details, commentaries, analysis and lineups for this São Paulo vs Atlético-GO match.
6:26 PM3 months ago

If you want to watch the game São Paulo vs Atlético-GO live on TV, your options is: ESPN.

What time is São Paulo vs Atlético-GO match for Copa Sudamericana?

This is the start time of the game São Paulo vs Atlético-GO of 8th September 2022 in several countries:

Dario Herrera will referee the match, with Gabriel Chade and Facundo Rodríguez at the flags, and Leodan Gonzalez in charge of VAR.
6:11 PM3 months ago

Rogério Ceni will not have a list of injured players and cannot use Arboleda, Caio, Nikão, André Anderson and Moreira, besides the suspended Igor Gomes. Meanwhile, Eduardo Baptista will not have only Luiz Fernando, who is also suspended.
5:56 PM3 months ago

Atlético-GO, in turn, besides the victory in the first leg, comes from two defeats in their last games. The first was away from home in the classic against Goiás, 2-1, on Saturday (27), with João Victor and Marquinhos scoring, while Shaylon deducted. After that, on Sunday (4), the defeat was at home to Atlético-MG by 2-0, with goals from Keno and Hulk.
5:51 PM3 months ago

São Paulo comes to the match after two defeats and a draw in their last games. The first defeat was to Fortaleza, on Sunday (28), by 1-0, with a goal from Juninho Capixaba at home. The other defeat was precisely the first leg on Thursday (01). After that came the 1-1 draw with Cuiabá away from home on Sunday (4), when Deyverson opened the scoring and Luizão tied.
5:46 PM3 months ago

In the first leg

In the first leg Atlético-GO received São Paulo in the Serra Dourada, on Thursday (01), where Jorginho opened the scoring, Luciano tied and then Igor Gomes was sent off, leaving the tricolor with one less, all in the first half. In the second Shaylon put the Dragon in front once again and Léo Pereira closed the account and gave the advantage to the visiting team tonight.