Thank you so much for following PSV and Waalwijk. A great afternoon to all and until next time.
9:39 AM5 months ago

Gakpo charged and scored the PSV goal in the last play of the game.
9:35 AM5 months ago

Xavi Simons was fouled inside the area and the referee gave PSV a penalty.
9:27 AM5 months ago

Vaessen received a yellow card.
9:26 AM5 months ago

van den Buijs received a yellow card.
9:10 AM5 months ago

Gutierrez received a card.
9:05 AM5 months ago

In: Branthwaite and Til

Out: Hoever and Shibari.

Gakpo took a free-kick in the area and the ball went straight into the hands of the goalkeeper.
8:41 AM5 months ago

The game remains tied with no goals.
8:20 AM5 months ago

Shawn Adewoye received a card at the end of the first half.
8:18 AM5 months ago

Xavi Simons gave a great pass to Gakpo, who fixed a bomb and the ball exploded on the post.
8:12 AM5 months ago

Gakpo took a free-kick and the ball exploded on the crossbar. Almost goal for PSV.
8:10 AM5 months ago

Ismael Saibari released a rocket and the ball passed very close to Etienne Vaessen's goal.
8:01 AM5 months ago

Waalwijk arrived in great danger. After seeing the initial pressure from PSV, the visiting team launched a counterattack and the ball reached Michiel Kramer, who finished and the ball went wide, shortly after Pelle Clement arrived in the area and Walter Benitez made a good save.
7:55 AM5 months ago

Juriën Gaari was fouled and took the first card of the game.
7:54 AM5 months ago

Waalwijk overcame the 15 minutes of play without conceding a goal and now they try to come out playing for the attack, but many wrong passes in midfield.
7:47 AM5 months ago

After initial pressure from PSV, Ismael Saibari scored for the home team, but the flag scored an irregular move in the attack.
7:36 AM5 months ago

PSV starts the match playing on the offensive field.
7:31 AM5 months ago

PSV has the best attack in the Eredivisie with 23 goals scored, but the team has conceded at least one goal in the last 12 matches.
6:51 AM5 months ago 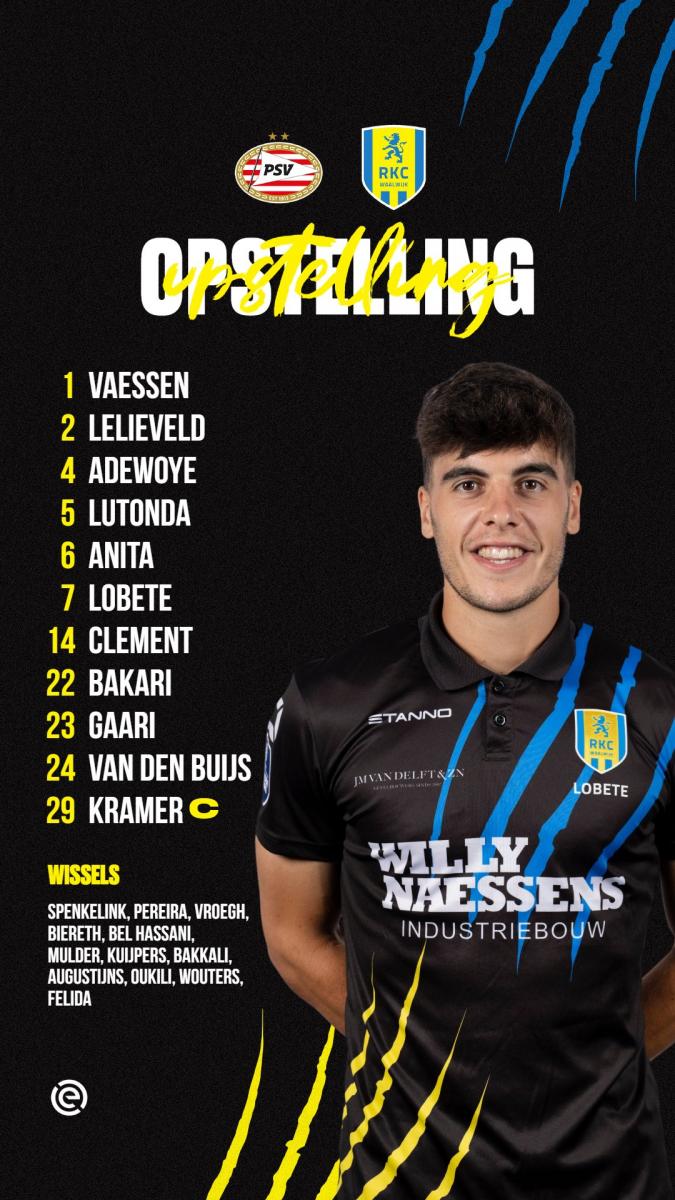 PSV reported that midfielder Sangaré, an important man in the team's midfield, is out of the relationship due to illness.
6:40 AM5 months ago 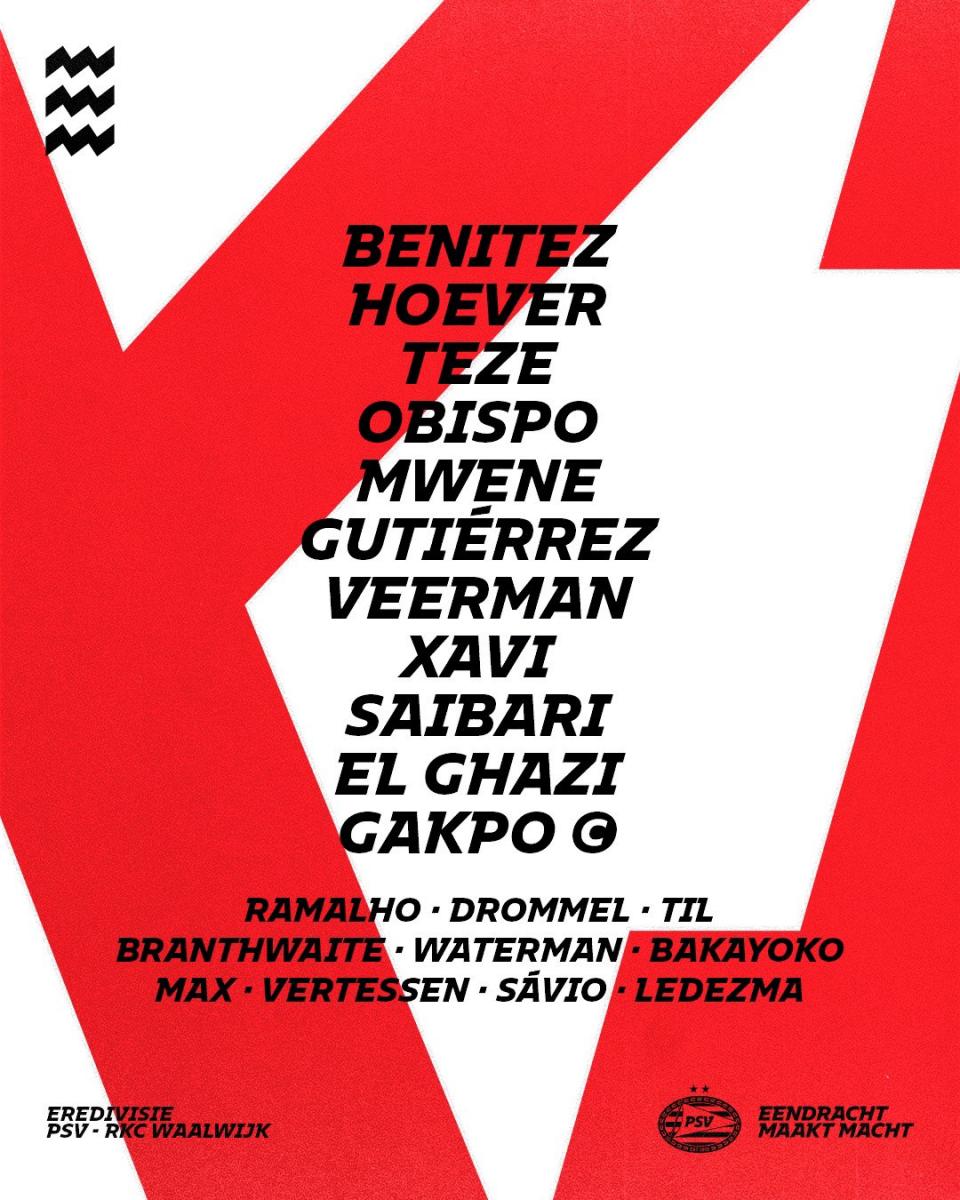 Do not miss a detail of the match PSV vs RKC Waalwijk live updates and commentaries live here on VAVEL.
4:11 PM5 months ago

Best of the month!

Xavi Simons was named the best player of the month of August by Eredivisie. The player scored six goals and provided two assists.
4:06 PM5 months ago

PSV partners with Austin FC, a club from the United States. The two clubs will exchange knowledge and experience to strengthen each other's position in the world of international football. The collaboration; ã also a commercial character.

“For PSV, internationalization é an important strategic pillar", said Frans Janssen, Commercial Director of PSV. “Our objective é enter into a series of strategic partnerships with clubs in areas where we think we can have an impact. Austin FC é a young professional football club with high potential and a constantly growing fan base, which makes the club an interesting partner for us. Austin FC can open up business opportunities in the United States of America for the entire PSV network.”

exchange of knowledge in the area of ​​scouting, education, player development é an important priority for the partnership. A delegation of 35 Austin FC coaches, trainers and policymakers paid a visit à PSV Academy this summer. And from then on, several coaches from the Texan club put into practice the PSV Coaching Academy program. “We were very impressed with the conversations we had with the PSV. The teaching structure of PSV é               ;”

“Football in America is stagnant; growing rapidly", continues the former American international, who has added an incredible 112 matches for his country. aware of this and I am sure that the partnership will verá similar opportunities for both clubs in the future. We can learn a lot from the way PSV has organized its football and talent development programmes. An additional advantage é that the Austin FC and PSV communities have great similarities. Both clubs are firmly rooted in a working community with a family style character. In addition, Austin, as well as Area of ​​Brainport, é oriented towards high technology.”

commercial Commercial possibilities are being explored and developed. The partnership with FC Austin offers PSV Sponsors and Partners opportunities to establish themselves in America when seek to undertake entrepreneurial activities. The two clubs will explore opportunities to play friendlies in the future as part of this venture.

PSV partners with Austin FC, a US club. The two clubs will exchange ;the knowledge and experience to strengthen each other's position in the world of international football. The collaboration will have; also a commercial character.

“For PSV, internationalization é an important strategic pillar", said Frans Janssen, Commercial Director of PSV. “Our objective é enter into a series of strategic partnerships with clubs in areas where we think we can have an impact. Austin FC é a young professional football club with high potential and a constantly growing fan base, which makes the club an interesting partner for us. Austin FC can open up business opportunities in the United States of America for the entire PSV network.”

How does the PSV arrive?

PSV didn't even get a good start in the Eredivisie, but lost in the last round to Twente 2-1 and left Ajax in the isolated lead of the competition. Currently, the team occupies the 4º placement with 12 points. In the úlast match, PSV was only tied by 1  a1 with Boto/Glimt from Norway, for the Europa League.
3:51 PM5 months ago

How does the RKC Waalwijk arrive?

RKC Waalwijk started very poorly in the 2022-23 season, he didn't win the first four games, but in the last round he beat Excelsior 5-2 and won his first victory in the competition. ;o, moving a little away from the Eredivisie relegation zone.
3:41 PM5 months ago

The match will be played atPhilips Stadion

The PSV vs RKC Waalwijk match will be played at the Philips Stadion with a capacity of 35.000 people.
3:31 PM5 months ago

Welcome to VAVEL.com's coverage of the Eredivisie: PSV vs RKC Waalwijk match live!