NOR1
END19 hours ago

Thanks for following this match on VAVEL USA. Until the next time!
4:31 PM17 days ago

The referee adds five minutes to the match.
4:23 PM17 days ago

Final stretch of the match. San Lorenzo continues to press forward in search of the equalizer.
4:17 PM17 days ago

Martegani's right-footed shot was heading straight for goal! But Armani leans back to keep the ball.
4:11 PM17 days ago

SAN LORENZO MISSES! The clearest shot was missed by Elías who, after a low cross, crashed into the defense and missed the equalizer.
4:11 PM17 days ago

Second caution for Herrera and he is sent off. River is down to 10 players.
4:05 PM17 days ago

Too high! Barrios gets the ball down the left wing to hit it with his first attempt, but his shot goes well over the crossbar.
4:03 PM17 days ago

River Plate: Pablo Solari and Esequiel Barco are out; Matías Suárez and Tomás Pochettino are in.
3:55 PM17 days ago

We reached the hour mark of the match. River closer to the second goal than San Lorenzo to the first.
3:45 PM17 days ago

River Plate: Santiago Simón leaves the field and Agustín Palavecino enters the field. San Lorenzo: Cerutti is out, Martegani is in.
3:44 PM17 days ago

River started the second half by taking the lead immediately with a powerful shot by Mammana that crashed into the home defense.
3:40 PM17 days ago

San Lorenzo: Bareiro and Glay are out; Vombergar and Leguizamón are in.
3:22 PM17 days ago

The referee adds one minute to the first half.
3:17 PM17 days ago

Cerutti goes down the right flank and delivers a cross that looks for Bareiro, but he fails to close the trap and the ball goes wide.
3:02 PM17 days ago

Half an hour into the match. River has lost possession, but the home side lacks depth.
2:57 PM17 days ago

CLOSE! Bareiro's header goes over the crossbar.
2:51 PM17 days ago

We reached the first quarter of the game. The locals start to respond.
2:45 PM17 days ago

A great save by Batalla after a cross from a free kick, but the goalkeeper anticipates correctly and avoids any shot.
2:42 PM17 days ago

First ten minutes and the match is quite lively in both areas, but the visitors have arrived with more danger.
2:37 PM17 days ago

Both teams are already on the field of the Pedro Bidegain Stadium doing warm-up exercises prior to the match, which is just minutes away from kick-off. 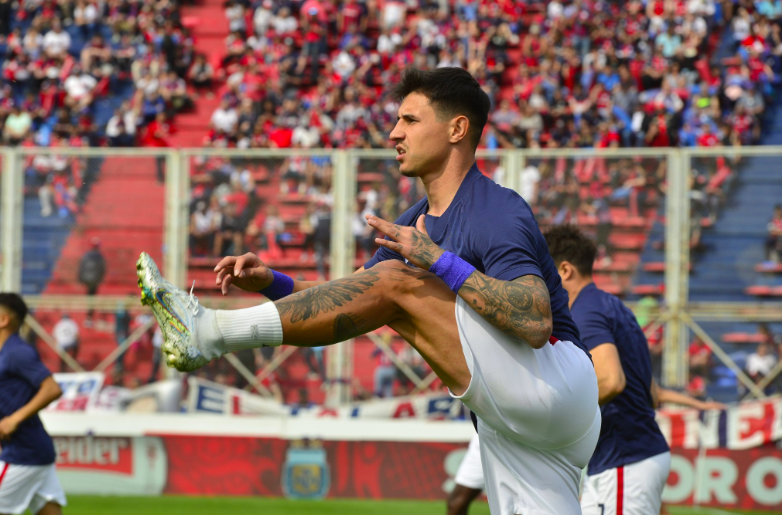 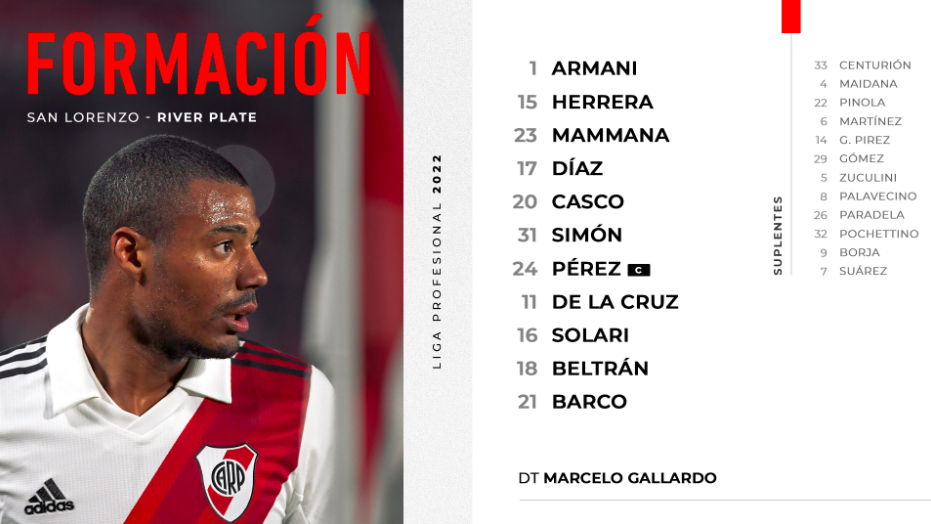 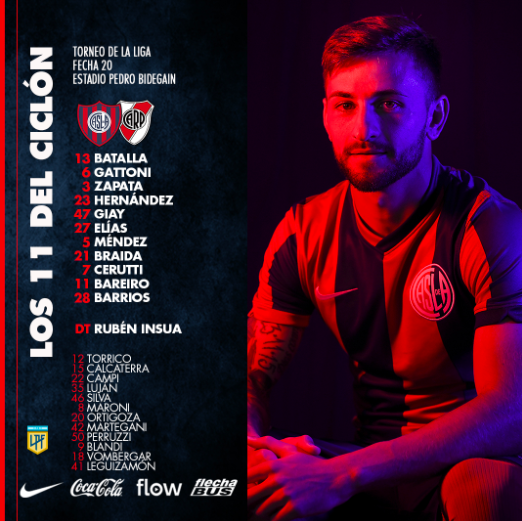 On the other hand, Rubén Darío will only have the loss of Argentine youth player Jeremías James, who will miss the rest of the season after an injury in mid-July against Boca Juniors that caused a ruptured cruciate ligament in his left knee.
1:58 PM17 days ago

Marcelo Gallardo will not be able to count on Colombian Juan Fernando Quintero, who suffered a left hamstring tear against Boca Junior and has at least a couple of weeks to recover. On the other hand, Robert Rojas, who is still recovering from his leg fracture, is also missing.
1:53 PM17 days ago

They have arrived! Both San Lorenzo and River Plate players have arrived at the Pedro Bidegain Stadium for this match that is just minutes away from starting. 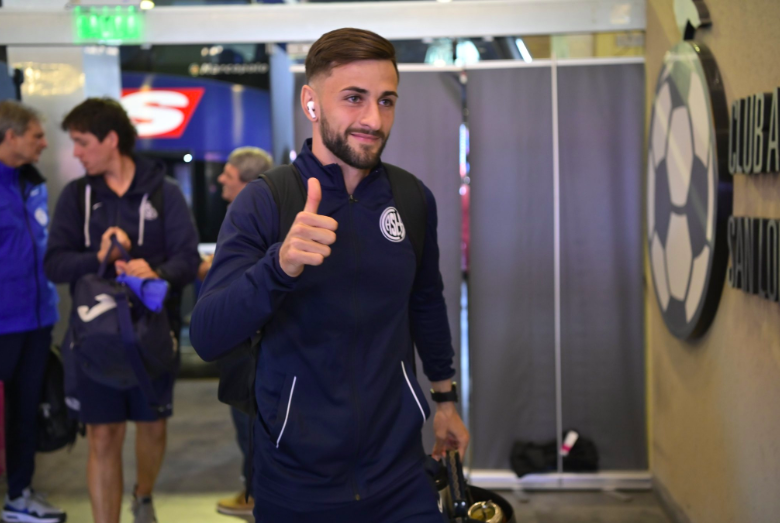 In the extensive history between these two teams, El Millonario has the balance in its favor with 75 wins to San Lorenzo's 56. Only 65 draws have been recorded. In their most recent meeting, River won by the narrowest of margins last March.
1:41 PM17 days ago

The Pedro Bidegain stadium, also known as El Nuevo Gasómetro, is a soccer stadium and home of the San Lorenzo club. This stadium is located in the capital city of Argentina, Buenos Aires. It has a capacity to hold a little more than 47 thousand spectators and today it will be the venue for this match between San Lorenzo and River Plate. 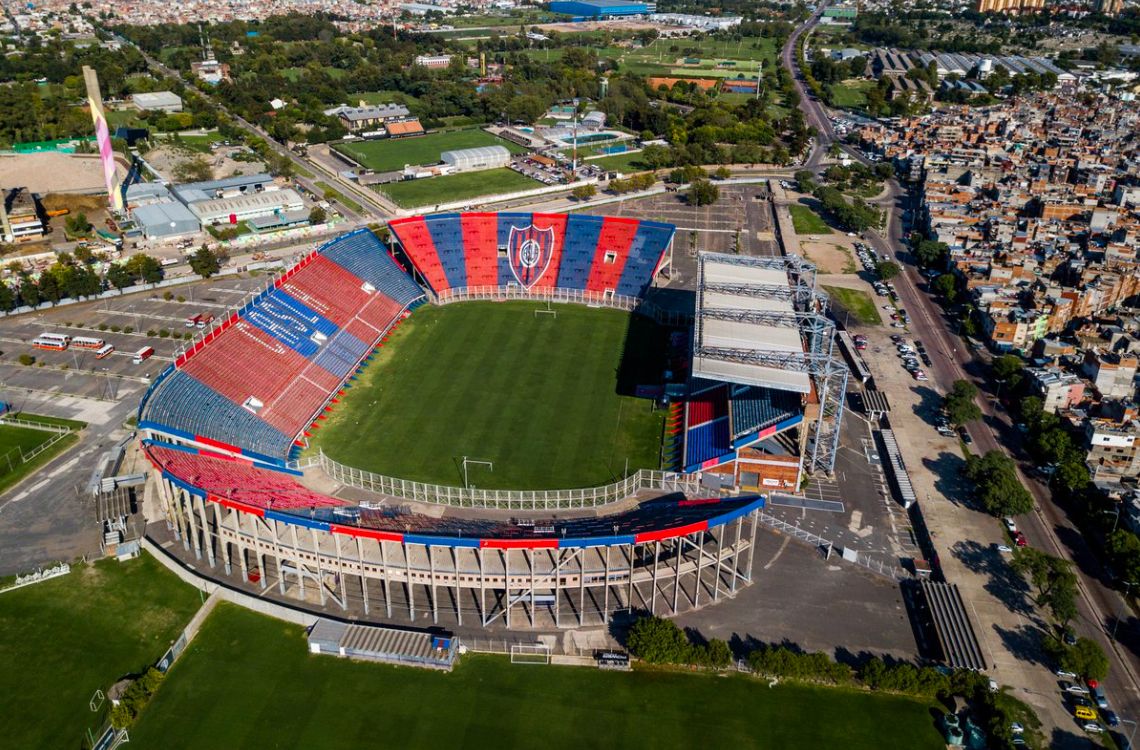 In less than an hour, everything is ready for the start of this match corresponding to the 20th day of the first division of Argentine soccer. Two teams that are close in the general table will play a match that looks to be evenly matched. The locals want to maintain their unbeaten streak, while the visitors need to shake off their last two defeats in a row. Will one of them manage to win? Follow our coverage on VAVEL USA.
1:14 AM17 days ago

Do not miss a detail of the match San Lorenzo - River Plate with the live updates and commentaries of VAVEL. Follow along with us all the details, commentaries, analysis and lineups for this match.
1:09 AM17 days ago

How to watch San Lorenzo - River Plate Stream on TV and Online?

If you want to watch the game San Lorenzo - River Plate live on TV, your options are: TyC Sports

If you want to directly stream it: Paramount + and VIX+

Adam Bareiro | The figurehead of El Ciclón, has been a factor in this squad. The 26-year-old Paraguayan striker has a total of 8 goals this season and is the team's leading scorer. Undoubtedly, the striker has been a star and will be looking for a way to keep it that way. 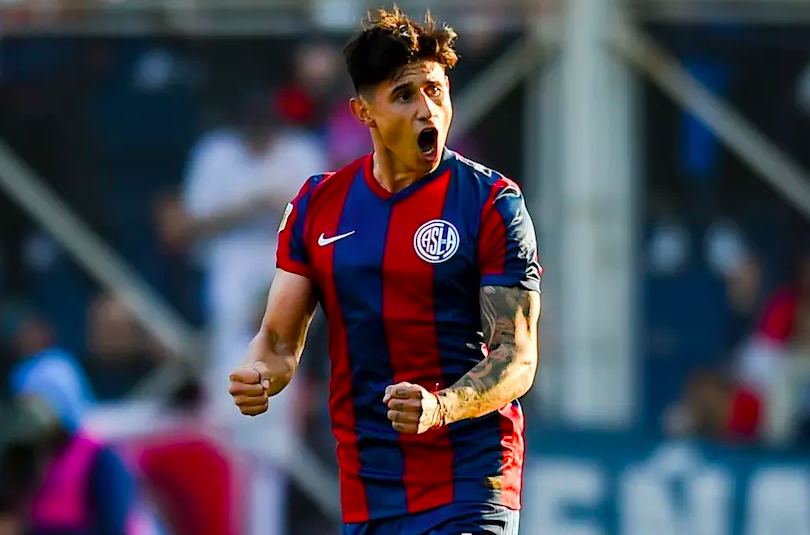 Pablo Solari | This 21-year-old Argentine player is one of River Plate's key players. Solari is the team's top scorer in the current edition of the Professional League with four goals. In total, he has scored seven goals since his arrival at River Plate. 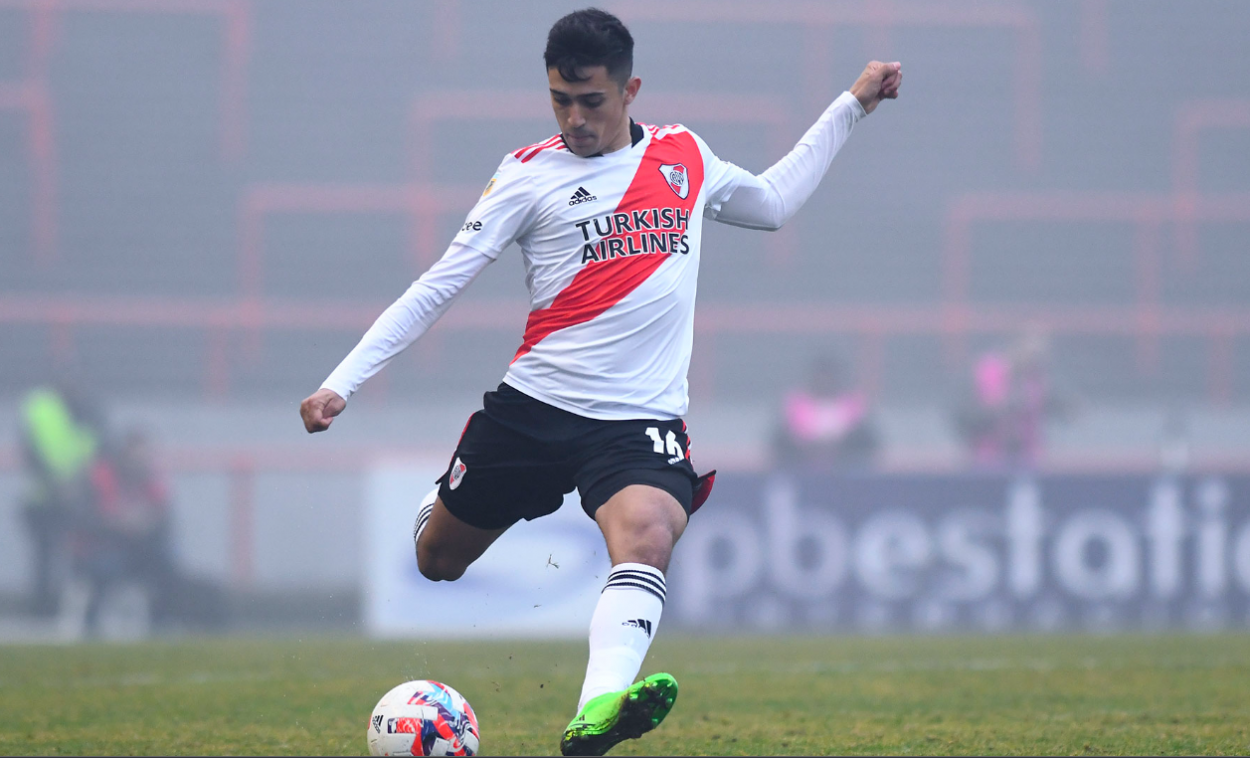 How does River Plate arrive?

On the other hand, the team coached by Marcelo Gallardo, arrives to this visit to San Lorenzo beaten after two consecutive defeats (against Boca Juniors and Banfield) that have distanced them from the fight for the championship of the Argentine League; the most recent defeat was last Wednesday by a score of 2-1. Now, El Millonario will be looking to get back to winning ways to get closer to the top positions and get into the fight for the title. River Plate is currently in 8th place with 29 points, the result of 8 wins, 5 draws and 6 defeats.
12:34 AM17 days ago

How does San Lorenzo arrive?

The local team, led by Rubén Darío Insúa, comes to this match after a scoreless draw against Colón at the Cementerio de los Elefantes. On a positive note, 'El Ciclón' has accumulated a six-match unbeaten streak, with a balance of two wins and four consecutive draws. Their last victory was in matchday 15 against Racing by a score of 2-1. San Lorenzo is once again looking for three points to qualify for the Copa Sudamericana. They are currently in 11th place with 27 points, the result of 5 wins, 12 ties, and 2 losses.
12:29 AM17 days ago

This afternoon, Sunday's activity corresponding to the 20th round of the Argentinean First Division will have a match in the capital of the Argentinean country with a very attractive and even match. The Pedro Bidegain stadium will host a match where two teams want to go for the three points and not let go units in this last final stretch of the competition. On the one hand, San Lorenzo wants to take advantage of its home advantage and thus climb up the table, but River Plate will be facing a team that comes from the aftermath of losing the Clasico against Boca Jrs.
12:24 AM17 days ago

The match will be played at the Stadium Pedro Bidegain

The San Lorenzo - River Plate match will be played at the Pedro Bidegain Stadium, in Buenos Aires, Argentina. Kickoff is scheduled for 2:30 pm (ET).
12:19 AM17 days ago

Inter Miami vs Orlando City preview: How to watch, kick-off time, team news, predicted lineups, and ones to watch 7 hours ago