The match ends in Israel. Madness in the stadium and on the pitch. Israel are promoted to League A of the Nations League. Weissman and Baribo were the scorers for Hazan's team.
3:37 PM2 months ago

Israel's goal. Madness at Bloomfield Stadium. A blunder by the visitors' defense that the striker took advantage of to score. Israel 2-1 Albania
3:34 PM2 months ago

Israel counter-attack finished by Baribo. Great chance for Israel with Baribo's head on the ball.
3:32 PM2 months ago

Goal by Uzuni. How Uzuni hooked it in. What a volley from the Albanian player, who smashed it into the top corner of the net. Reja's team ties the match
3:22 PM2 months ago

Both teams relax. Israel is happy with this result. Albania tries to tie the match
3:13 PM2 months ago

How the Israeli goalkeeper flew. Ramadani took a powerful shot but the keeper reacted well. Ball to the corner
3:06 PM2 months ago

Weissman set up Abada for a ball that was too high, but Abada is off-target. The shot goes wide. A great chance for Israel
3:00 PM2 months ago

Great chance for Albania. Veseli put it in from the right flank and Cikalleshi headed it in. The shot goes over. The visitors are in for a scare
2:51 PM2 months ago

Goal for Israel. Weissman puts the ball into Strakosha's net. A pure striker's move. The home side take the lead.
2:49 PM2 months ago

The first 45 minutes are over in Israel. The home side deserved more but were unable to beat Strakosha. Goalless draw at Bloomfield Stadium
2:26 PM2 months ago

Another chance for the home side. Dasa gets his head to the ball but the shot goes into the hands of the Albanian goalkeeper.
2:19 PM2 months ago

Another chance for Israel. Now for Abada. The winger took a rebound inside the box but the shot was no good. Goal kick for Albania
2:16 PM2 months ago

28'|Israel calls for a penalty

Laci grabbed Haziza a bit but the referee didn't see anything. Strakosha takes the kick off. The score is still 0-0
2:07 PM2 months ago

The Israeli right-back tried from distance and almost caught Strakosha by surprise. The ball went narrowly wide.
2:04 PM2 months ago

The beginning was intense for both teams. The locals have been closer to the opponent's goal but nothing dangerous.
1:47 PM2 months ago

The match kicks off in Israel. The home team, dressed in blue, kicks off the game. Albani in red. Let's see what the match has in store
1:42 PM2 months ago

The hymns are playing

The two teams are already at Bloomfield Stadium. The anthems of both teams are playing. This is about to begin
1:39 PM2 months ago

For his part, Reja has chosen his eleven for this match. This will be the starting eleven: Strakosha, Balliu, Ismalji, Ajeti, Abrashi, Asllani, Gjasula, Laci, Hysaj, Broja and Cikalleshi.
1:39 PM2 months ago

Less than ten minutes to go before kick-off and both coaches have already selected their starting line-ups. Let's start with Israel's lineup.
1:22 PM2 months ago

The match between Israel vs Albania will be played in Israel at Bloomfield Stadium. The match will start at 20.45 Spanish time.
1:20 PM2 months ago

Albania will face Iceland in their next match. Israel, meanwhile, will play Malta in three days' time.
1:19 PM2 months ago

The last time the two sides met was in round 3 of the Nations League where Israel won 1-2.
12:56 PM2 months ago

They are already at the stadium

Both teams have recently arrived at the stadium. They will soon go out for warm-up exercises in preparation for the match.
12:56 PM2 months ago

Hello again. We are back to report on the match between Israel vs Albania. Follow the online broadcast of this match on VAVEL.
8:46 AM2 months ago

Stay tuned for live coverage of Israel vs Albania

In a few moments we will share with you the starting lineups for Israel vs Albania live, as well as the latest information coming out of Israel. Stay tuned for up-to-the-minute live coverage of the match on VAVEL.
8:36 AM2 months ago

This is the start time of the game Israel vs Albania of 24th September 2022 in several countries:

The match between Israel vs Albania of the Nations League can be seen on UEFA TV at 20:45. Also, if you want to follow the match online, you can keep up to date with what is happening in the match and the score on VAVEL.
8:16 AM2 months ago

The last meeting between them was in the first leg of the Nations League B, matchday 3, where they played in Tirana, Albania. Israel conquered the Arena Kombetare by the minimum, 1-2. The Israelis came back from Broja's goal, on penalty, on the stroke of half-time. In the second half, Solomon came to the rescue. The Shkatar player scored a brace to give his team the three points.
8:11 AM2 months ago

These teams have met a total of five times. The home side has more wins than their opponents. Israel has won three matches while Albania has won twice. Albania has not beaten Israel since 2018.
8:06 AM2 months ago

With two matches remaining in Group 2 of the UEFA Nations League B, where Israel is in first place with five points and momentarily undefeated at this stage of qualification. With a win, they would move up to League A of this competition. Their chaser is Iceland with three points, where they still have to face Albania. In third place is Albania, which has only one point. In last place is Russia, which has been expelled from this tournament.
8:01 AM2 months ago

Albania faced Estonia in their last match. The match was a friendly and this was reflected in the outcome of the game. The result of the match was a goalless draw. It was a good opportunity for both teams to gain experience and to know what to modify for the upcoming matches.
7:56 AM2 months ago

Israel's last match was against Iceland on matchday 4 of the Nations League. The visitors managed to equalize twice and, in the end, took a point on Icelandic soil. First, Thorsteinsson put the home side ahead, but Grétarsson equalized before the break. In the second half, Iceland took the lead again with a goal by Helgason. Israel, however, equalized again, this time with a goal by Peretz. In the end, the match ended in a 2-2 draw.
7:51 AM2 months ago 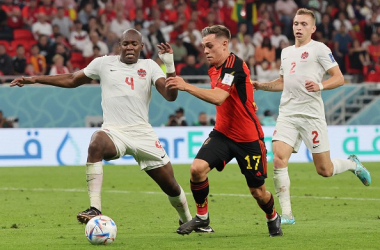