Thank you for following the minute by minute through VAVEL. Keep visiting the VAVEL portal to keep up to date with everything that is happening in the world of sports.
11:07 PM2 months ago

The match is over, the Bravos de Juárez team will look for the results to combine in their favor so that they can continue dreaming of this brief, but for now, qualification to the playoffs.
10:52 PM2 months ago

Attempt saved just outside the top left corner. Eduardo Salvio (Pumas UNAM) right footed shot from outside the box is saved in the bottom left corner.
10:48 PM2 months ago

Attempt saved just outside the top left corner. Eduardo Salvio (Pumas UNAM) right footed shot from outside the box is saved in the bottom left corner.
10:44 PM2 months ago

Jorge Ruvalcaba (Pumas UNAM) right footed shot from the left side of the box is blocked.
10:39 PM2 months ago

Diogo (Pumas UNAM) right footed shot from the center of the box is blocked.
10:29 PM2 months ago

Attempt blocked to the right side of the goal. Eduardo Salvio (Pumas UNAM) right footed shot from outside the box is saved in the bottom right corner. Assisted by Diogo with a headed pass.
10:22 PM2 months ago

César Huerta (Pumas UNAM) right footed shot from outside the box is blocked.
10:18 PM2 months ago

The second half begins, FC Juárez is looking to qualify for the playoffs while Pumas is looking to ruin the homecoming for the team from the border.
9:59 PM2 months ago

The first half is over, Juarez leads 2-1 at the moment and is qualifying for the playoffs for now.
9:49 PM2 months ago

GOOOOOOOOOL FOR JUAREZ! The frontier team takes the lead once again
9:42 PM2 months ago

GOOOOOOOOOOOOOL FOR PUMAS! Diogo scores the equalizing goal with a shot to beat Talavera
9:34 PM2 months ago

Juan Dinenno (Pumas UNAM) right footed shot from the center of the box is blocked.
9:32 PM2 months ago

Leonel López (Pumas UNAM) is shown the yellow card for a bad foul.
9:23 PM2 months ago

Francisco Nevárez (FC Juárez) is shown the yellow card for a bad foul.
9:19 PM2 months ago

Attempt missed. Jesús Dueñas (FC Juárez) right footed shot from outside the box is close, but misses to the left. Assisted by Alan Medina.
9:15 PM2 months ago

Attempt saved low to the left. Juan Dinenno (Pumas UNAM) header from the center of the box is saved in the bottom left corner. Assisted by Eduardo Salvio with a cross.
9:12 PM2 months ago

Eduardo Salvio (Pumas UNAM) hits the post with a left footed shot from outside the box.
9:08 PM2 months ago

GOOOOOOOOOOL FOR THE BRAVOS DE JUÁREZ! Jesús Dueñas scores the first goal of the match and the border team dreams of making the playoffs in Mexican football.
9:05 PM2 months ago

In a couple of minutes we will start broadcasting the match between FC Juárez and Pumas UNAM, matchday 17 of the Apertura 2022 Liga MX Tournament.
8:41 PM2 months ago

This is the lineup that the Pumas of the National University send to face their last duel of the Apertura 2022, Andrés Lillini and company will seek to close the tournament with honor. 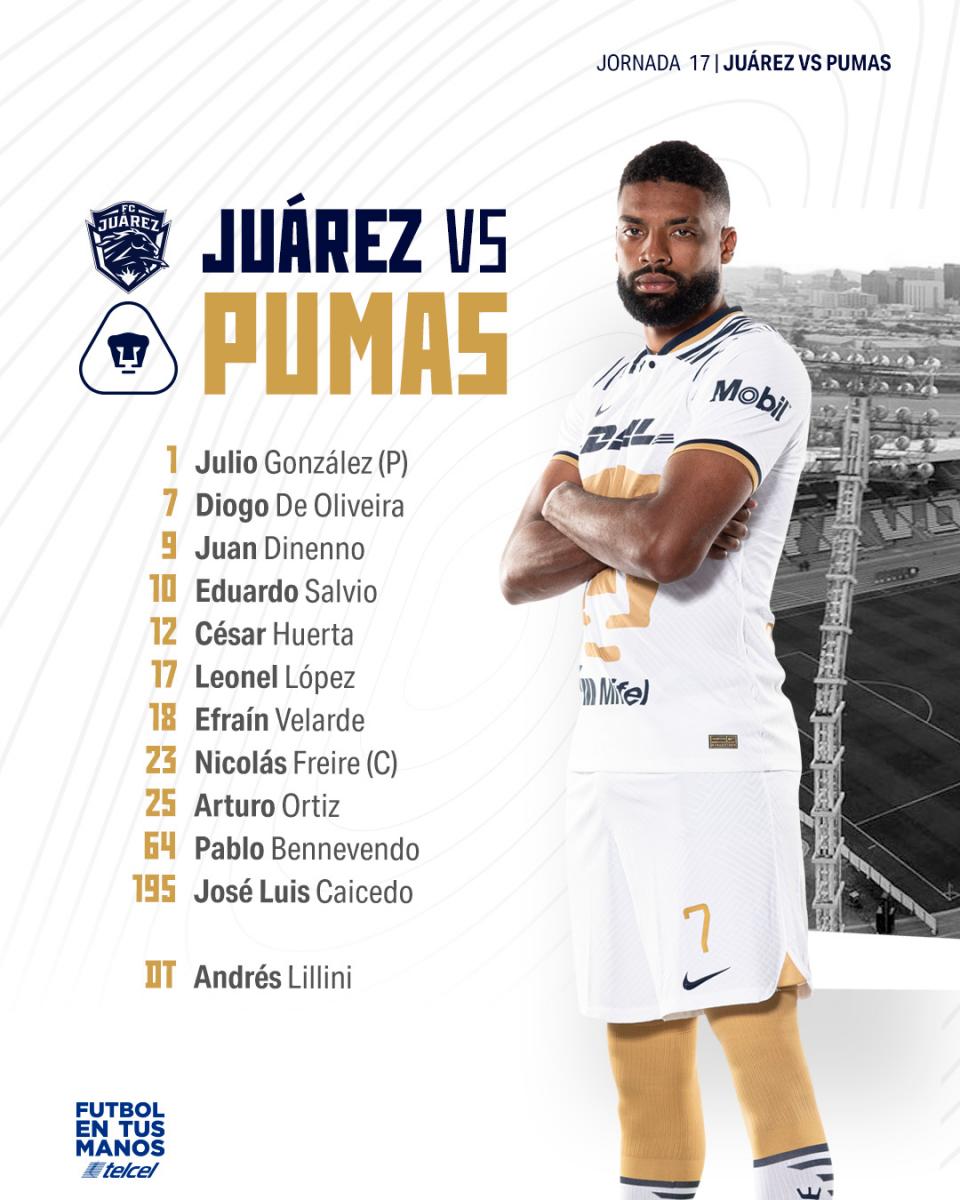 This is the lineup sent by FC Juárez to face their duel where they are playing for their pass to the final phase of the championship. 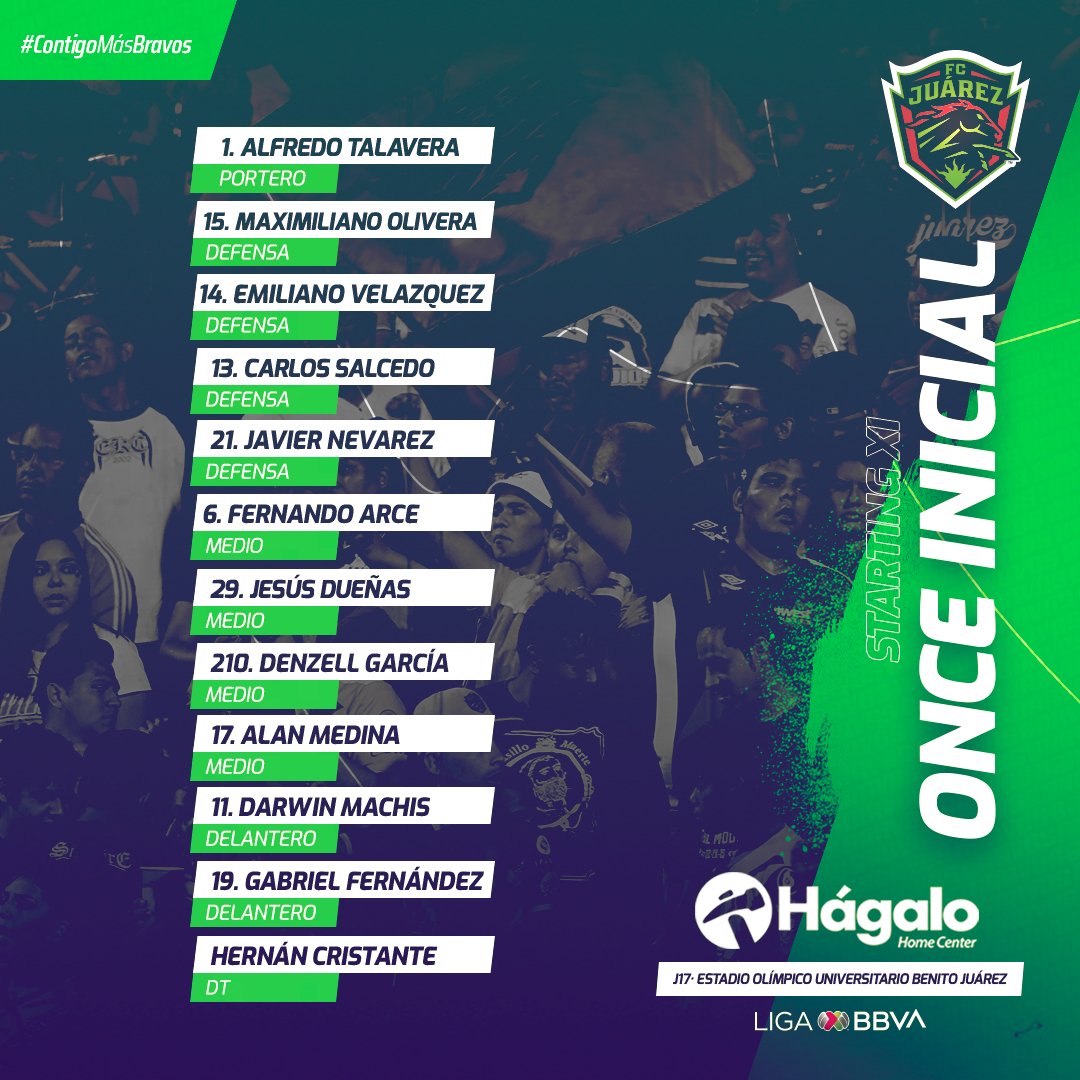 At Pumas de la UNAM, the name of Miguel Mejía Barón will no longer be heard within Cantera in the event that the board of directors decides to terminate the contract of professor Andrés Lillini, although his report will be fundamental, the resolution will go through all parts of the board, so after this match, the fate of many will hang in the balance.
8:32 PM2 months ago

THOSE WITH THE MOST ASSISTS

At the moment, Arturo González continues to be the best assists player of the championship with 6 assists made for Monterrey, next to him is Leó López of the red devils of Toluca with 6 assists made as well, in second place are Álvaro Fidalgo of América, Carlos Orrantia of Santos Laguna, Fernando Gorriarán, Henry Martín, and Kevin Álvarez with 5 assists to goal made.
8:27 PM2 months ago

THE SCORERS OF THE TOURNAMENT

At the moment, the one who aspires to win the scoring championship is Nico Ibáñez with 11 goals scored for Pachuca, followed closely by the Mexican Henry Martín with 10 goals for América, in third place are Abel Hernández of Atlético de San Luis and Martín Barragán of Puebla with 8 goals scored, in fourth place are Facundo Batista of Necaxa, Jean Meneses of Toluca and Luca Di Yorio of León with 7 goals in their accounts.
8:22 PM2 months ago

The team from the border traveled last matchday to the home of the pain of others to face Santos Laguna, Bravos needed to win if they were to have a more secure place in the playoffs or for qualification to depend on themselves, however, they did not expect the Laguna team to impose themselves at home with goals from Harold Preciado and Javier Correa to seal a 2-0 final score. Now, everything depends on the Bravos de Juárez and another combination of results to go through.
8:17 PM2 months ago

Pumas traveled to the city of Puebla to face Puebla with the illusion of getting the three points and keeping alive the dream of qualifying to the final phase of Mexican soccer, however, during the attempt they failed to score two goals that killed the team's hopes and despite the fact that Toto Salvio scored a goal in the final minutes, Pumas could not do anything and fell 2-1 to be eliminated from the final phase.
8:12 PM2 months ago

The wait is over in Liga MX, matchday 17 has arrived and with it the regular phase of the tournament is over. FC Juárez receives Pumas in what will probably be the last duel between the two teams in this tournament. On the one hand, Pumas is already completely eliminated after losing to Cruz Azul and Puebla, however, Juarez can still qualify for the playoffs if they win, but they will have to be on the lookout for a favorable combination for them.
8:07 PM2 months ago

Do not miss a detail of the match with the live updates and commentaries of VAVEL. Follow along with us all the details, commentaries, analysis and lineups for this Juarez vs Pumas match.
8:02 PM2 months ago

Where and how to watch Juarez vs Pumas live online

The match will be broadcasted on TUDN USA. You can also watch the match via streaming on VIX plus.

For this match, the player to watch will be Dani Alves. The historic Brazilian fullback will be in charge of handling the ball and distributing it throughout the field for Club Universidad Nacional so that the attacking plays that generate goal danger for the opponent can arrive little by little. Alves is a player who can change the outcome of a game in a matter of minutes, so opponents will have to be careful with him. 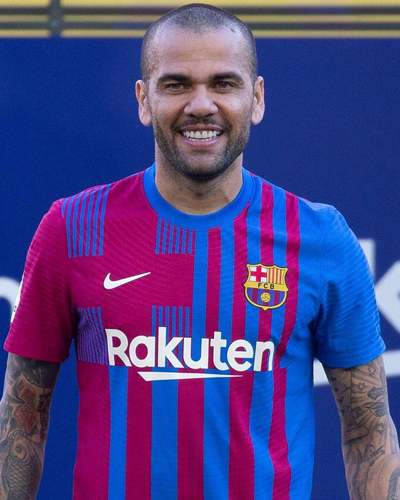 Watch out for this FC Juárez player:

For this match, the player to watch will be Javier Salas, the midfielder with great experience in the national football has been characterized by putting order on the field. Javier Salas has become one of the players with the greatest projection in the midfield, he is also fundamental in the circulation of the ball for FC Juárez Bravos. 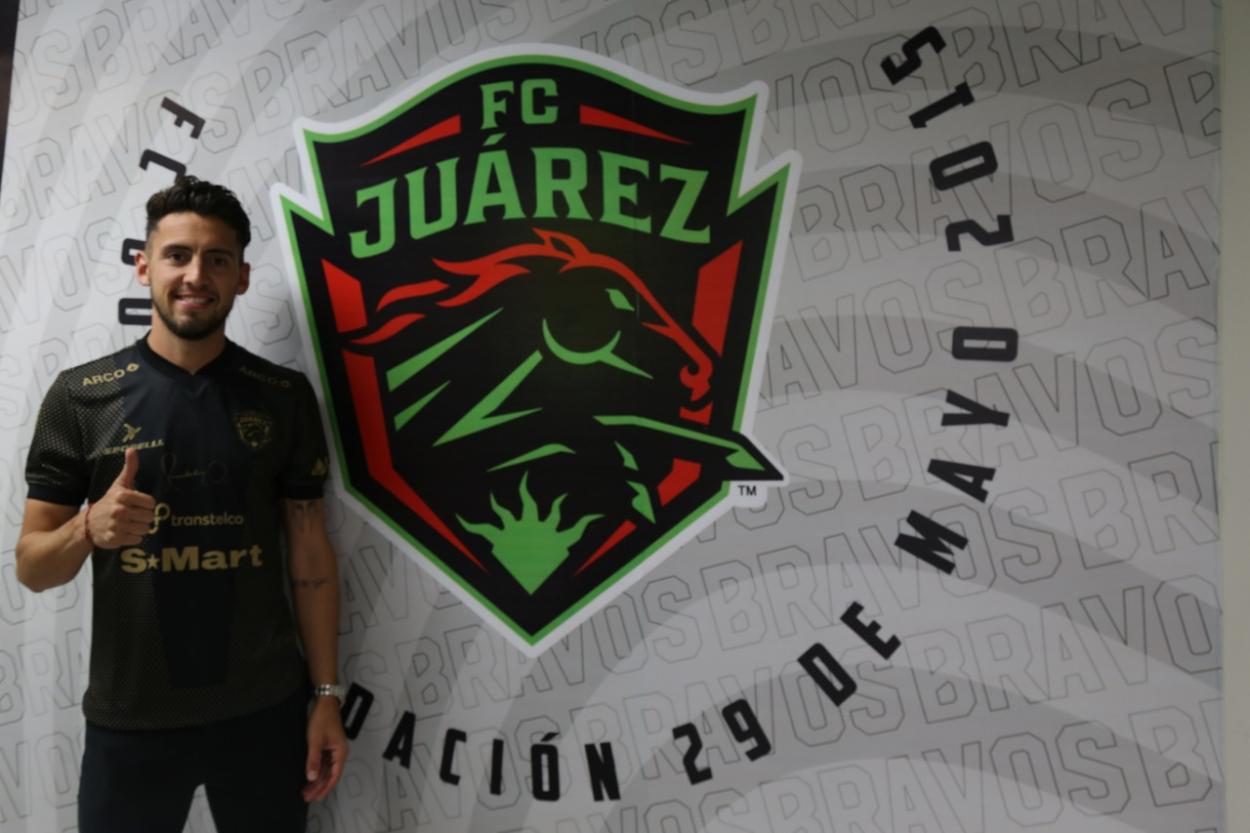 FC Juarez and Pumas have met on a total of 9 occasions (1 win for the Bravos, 5 draws and 3 wins for the auriazules) where the balance is slightly in favor of Pumas. In terms of goals scored, it is the capital team that has the advantage with 13 goals scored over FC Juárez's 10. Their last meeting dates back to matchday 12 of last season, when Pumas beat Juárez by the minimum.
7:32 PM2 months ago

The Estadio Olímpico Benito Juárez is a sports venue located in Ciudad Juárez, where several sports can be played, but it is commonly used for soccer. It is currently the home of FC Juárez, a team that plays in Mexico's first division or Liga MX and the home of Bravas de Juárez, a women's team of Liga MX Femenil.

It has a seating capacity for 19,703 people and was built in October 1980 and inaugurated on May 12, 1981 with a soccer game between the Mexican National Soccer Team and Atletico Madrid, which tied at zero goals. It is currently owned by the Universidad Autónoma de Juárez.

They want to win on the road

For their part, the Pumas team is officially eliminated from the Apertura 2022 Tournament after losing their ALL or NOTHING duel with Puebla last Friday in the compensation of their pending match. The team coached by Andrés Lillini, which was armed to the hilt with the illusion of fighting for the title, gradually fell to the bottom of the general table and began to play game by game for qualification, however, the elimination came too soon for the university team where Dani Alves could not do anything. The Pumas team is in 16th place in the general table with only 14 points, the result of 2 wins, 8 ties and 6 defeats. They also have 20 goals for and 28 against, leaving them with a goal difference of -5 goals. Now all they have to do is win for pride and think about the future of Club Universidad Nacional.
7:22 PM2 months ago

To raise their faces and win at home

The Bravos de Juárez team had a very irregular tournament, despite having a good collective soccer, the Bravos team was unable to make it count on the scoreboard, leading them to achieve bad results to the point of being in the lower positions of the general table and gradually running out of hope of qualifying for the playoffs of Mexican soccer. FC Juárez is practically eliminated from the championship in the absence of a miracle, they currently have 16 points and are in 14th place in the general table with 3 wins, 7 ties and 6 defeats, also, in the statistics they average 14 goals and 17 goals against, leaving them with a difference of -3 goals. If Juárez wants to qualify, they need Atlético de San Luis and Mazatlán to lose their games, and Juárez needs to win to increase their goal difference so that will be the key factor in case they tie on points with San Luis.
7:17 PM2 months ago

The regular phase is over

The regular phase of the tournament has come to an end, the 17th matchday is here and with it came the end of the 17 adventures of each team that are part of the regular tournament to welcome the final phase of the championship, where the qualified teams will seek to fight with everything they have for every ball and opportunity to put the ball in the net in duels where there will be no tomorrow, they will play for everything with only one goal; to be the champion of the Apertura 2022 tournament. For this match, FC Juárez will receive a visit from Pumas of the National University, both teams have already been eliminated from the championship after having had an irregular performance throughout the campaign, so now the only thing left is to close the tournament with a victory and leave thinking about the next opportunity with their heads held high and knowing that the opportunities will come at the end of the season.
7:12 PM2 months ago

The Juarez vs Pumas match will be played at the Estadio Olimpico Benito Juárez, in Juarez City, Mexico. The kick-off is scheduled at 22:00 pm ET.
7:07 PM2 months ago

Welcome to VAVEL.com’s LIVE coverage of the 2022 Liga MX Match: Juarez vs Pumas!