Thank you for listening to this Premier League match. Have a nice day, and see you next time!

Arsenal now play against Bodo/Glimt on Thursday (6) in the Europa League, while Tottenham visit Eintracht Frankfurt in the Champions League on Tuesday (4). Spurs remain in third place with 17 points, while Arsenal lead the standings by a wide margin with 21 points!

In an intense derby, Arsenal wins and remains at the top for another round!

Gabriel Martinelli hit the free-kick straight at goal, but sent it over the net!
8:21 AM2 months ago

Yellow for Dier, for a foul on Nketiah on the left.
8:18 AM2 months ago

Tierney hit the ball hard from outside the box and Lloris flew to the left corner to keep the ball out!
8:16 AM2 months ago

Arsenal substitution: White out, Tomiyasu in.
8:12 AM2 months ago

Yellow card to Martinelli, for a cart in the midfield.
8:07 AM2 months ago

Double substitution at Arsenal: Odegaard and Gabriel Jesus left to enter Fabio Vieira and Nketiah.
8:05 AM2 months ago

Yellow card to Saliba, for leaving his body on Bentancur on the counterattack.
8:02 AM2 months ago

Tottenham substitution: Hojbjerg is out for Skipp.
8:01 AM2 months ago

Odegaard hit the ball from outside the box and sent it into the left side of the goal. And after that there were double substitutions for Arsenal: Partey and Zinchenko left for Lokonga and Tierney.
8:01 AM2 months ago

A quadruple substitution for Tottenham: Perisic, Lenglet, Richarlison, and Son were replaced by Sanchez, Doherty, Sessegnon, and Bissouma.

Partey found Martinelli in the middle, who took the ball to the edge of the area and put Xhaka in the box, dominating, already taking the defender out to hit hard and beating Lloris, increasing the score!
7:53 AM2 months ago

Emerson Royal went for the tackling and Martinelli just advanced the ball in the defense field. The Tottenham fullback stepped on the Arsenal forward's ankle and was red-carded for it. The Spurs player is sent off!
7:47 AM2 months ago

Richarlison made a pass into the middle and the ball went past Son, but it was left to Hojbjerg, who came in shooting and sent it over the goal!
7:41 AM2 months ago

Ben White received the ball on the end line and crossed to the head of Gabriel Jesus, who sent it across the right side of the goal.
7:38 AM2 months ago

Gabriel Jesus makes the first touch and the ball starts to roll for the second half of the Derby!
7:33 AM2 months ago

In a VERY intense Derby first half, Arsenal and Tottenham go into the break tied at the Emirates!
7:14 AM2 months ago

Gabriel Jesus received on the left, took out two defenders and hit a shot, but Lloris sprawled and got the rebound in the dispute with Odegaard!
7:09 AM2 months ago

Perisic got a cross from the left and found Kane in the box, who headed in the hands of Ramsdale.
7:02 AM2 months ago

Kane went calmly for the ball and hit it into the middle of the goal, with no chance for Ramsdale, who got out to the right corner, tying the Derby on his 100th Premier League away goal!
7:01 AM2 months ago

Richarlison received the ball in a moment of Tottenham pressure and was brought down by Gabriel Magalhães, winning the maximum penalty!
7:00 AM2 months ago

Perisic received the pass on the left, charged and hit hard, sending it over the goal!
6:51 AM2 months ago

Partey received the ball on the edge of the box and shot hard, sending the ball into the left corner, high up, without any chance for Lloris, with a great goal to open the score in Derby!
6:48 AM2 months ago

White managed to get a shot from outside the area, but over the goal. Xhaka's next shot was a dangerous one, this time from the left side of the goal!
6:45 AM2 months ago

In a free-kick taken by Son lifting the ball in the area Dier deflected and the ball was left for Richarlison to touch with his boot to a huge save by Ramsdale!
6:33 AM2 months ago

Martinelli received the cross on the left and hit it hard, hitting Lloris' right post!
6:30 AM2 months ago

Harry Kane makes the first touch on the ball and it rolls into the first half of the match!
6:27 AM2 months ago

The teams take to the field to start the Derby!

The players take to the pitch at the Emirates to start their warm-up exercises.
6:00 AM2 months ago

Tottenham is lined up and will take the field with: 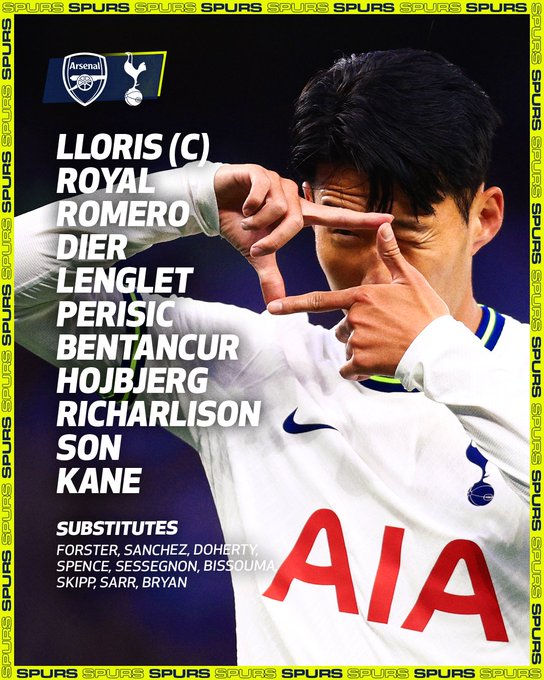 Arsenal is lined up and will take the field with: 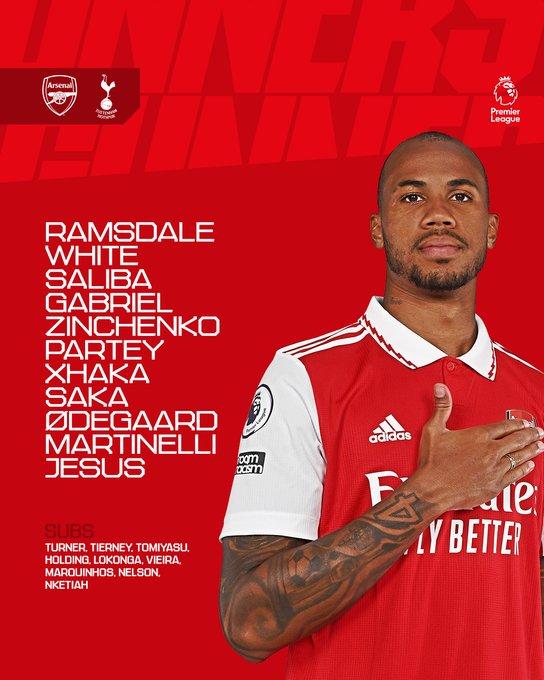 Now we start the broadcast of another Premier League match here on VAVEL. And today is a classic day in the Premier League. It is North London Derby day!
5:45 AM2 months ago

Do not miss a detail of the match with the live updates and commentaries of VAVEL. Follow along with us all the details, commentaries, analysis and lineups for this Arsenal vs Tottenham match.
5:40 AM2 months ago

How to watch Arsenal x Tottenham Live in TV and Stream

If you want to watch the game Arsenal x Tottenham live on TV, your options is: none.

What time is Arsenal x Tottenham match for Premier League?

This is the start time of the game Arsenal vs Tottenham of 1st October 2022 in several countries:

Anthony Taylor will referee the match, with Gary Beswick and Lee Betts as assistants, and Jarred Gillett in charge of VAR.
5:25 AM2 months ago

The probable Tottenham team for the match is: Lloris, Romero, Dier and Lenglet; Perisic, Bentancur, Hojbjerg and Sessegnon; Richarlison, Son and Kane.
5:20 AM2 months ago

Mikel Arteta will be unable to use Elneny, Smith-Rowe and Cedric, all injured, just as Antonio Conte will be without Ben Davies, Kulusevski and Lucas Moura, also injured.
5:10 AM2 months ago

Arsenal lead the competition with 18 points, one above Manchester City and Tottenham, the latter being up by four points from Brighton, five from Manchester United and six from Fulham.
Standings provided by SofaScore
5:05 AM2 months ago

Tottenham in turn comes from a defeat and a win in the last games. The defeat was on the 13th, to Sporting, by 2-0, with João Fernandes and Arthur Gomes in the Champions League. After that, on Saturday (17), the victory came 6-2 over Leicester, with Tielemans opening the scoring, Kane equalizing, Dier turning and Maddison equalizing again, all in the first half. Then in the second Son came on after Bentancur's goal, scoring a hat-trick to complete the rout.
5:00 AM2 months ago

Arsenal come into the match on the back of two wins in their last few games. The first was in the Europa League, away from home, on the 8th, when they beat Zurich 2-1, with Marquinhos opening the scoring, Kryeziu equalizing and Nketiah scoring the winning goal in the end. After that, on Sunday (18), the victory was 3-0 over Brentford, with goals from Saliba, Gabriel Jesus, and Fábio Vieira.
4:55 AM2 months ago