Thank you here for listening to another Eredivisie match. Have a good afternoon, and see you next time!

And Cambuur surprises the Eredivisie leader and wins with impressive strength in the second half!

Van Wermeskerken, took a ball that was left on the edge of the area for him to hit hard, with no chance of defense for Benitez, scoring another one for Cambuur!
11:16 AM2 months ago

Replacement in Cambuur: Paulissen is out and Breij is in.
11:12 AM2 months ago

In a moment of pressure from Cambuur, where the ball was almost all the time inside the area, Paulissen got his shot into the right corner to beat Benitez and extend the score!
11:07 AM2 months ago

Substitution in Cambuur: Balk left and Mambimbi came in. In the PSV left Sangaré and entered Ledezma.
11:04 AM2 months ago

From a corner kick coming from the left Obispo managed to get a header, but it went to the right side of the goal!
10:59 AM2 months ago

Replacement in Cambuur: Van der Water and Tol left for Mac-Intosh and Sambissa.
10:56 AM2 months ago

Substitution in PSV: Max and Veerman are out, and Oppegard and Gutiérrez are in.
10:51 AM2 months ago

Substitution in PSV: left Saibari and Simons for the entry of Savinho and Vertessen. And in the next move Max was yellow carded for the foul he made in the midfield.
10:43 AM2 months ago

Borer stole the ball in the attack field and found Van der Water in the midfield, who took off and shot high into the right corner, with no chance for Benitez, scoring a great goal!
10:34 AM2 months ago

Boere gets the first touch on the ball and it rolls into the second half of the match!
10:17 AM2 months ago

Without goals and in an even game, Cambuur and PSV go on to tie the match.
10:16 AM2 months ago

A cross from Van der Water was deflected into the middle, where Boere tried to finish, but it went over the goal!
10:01 AM2 months ago

Saibari was released on the right and finished, but Virginia came out well at the striker's feet and deflected the ball away.
9:53 AM2 months ago

Sangaré found Max on the left, invading the area, to arrive kicking and sending the ball into the net from the outside.
9:50 AM2 months ago

Balk, from outside the area, shot and sent the ball into the hands of Benitez.
9:43 AM2 months ago

Jacobs was now the one to finish from outside the area, but from the right side of the goal.
9:33 AM2 months ago

Saibari already had the first chance, but shot over the Virginia goalkeeper!
9:33 AM2 months ago

Simons gets the first touch on the ball and it rolls into the first half of the match!

PSV is lineup and will play with: 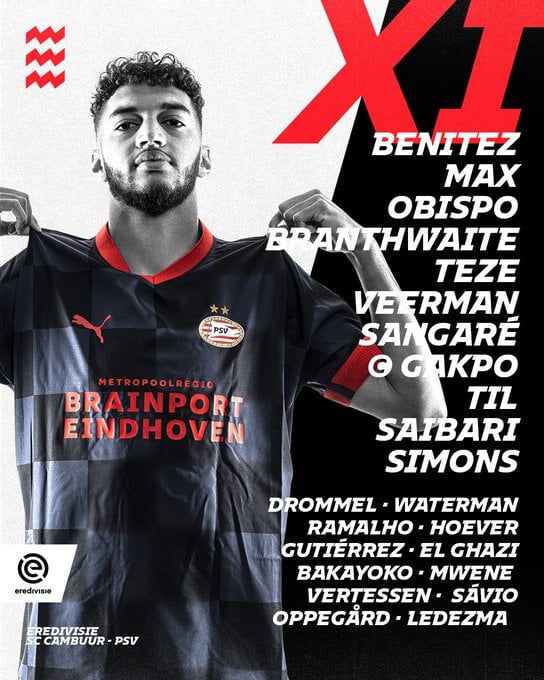 Cambuur is lineup and will play with: 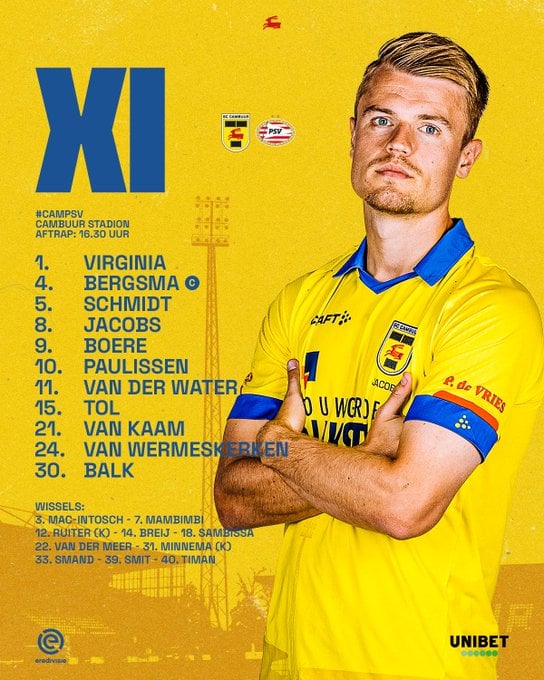 We are now starting the broadcast of the Eredivisie match between Cambuur and PSV!

Do not miss a detail of the match with the live updates and commentaries of VAVEL. Follow along with us all the details, commentaries, analysis and lineups for this Cambuur vs PSV match.
8:27 AM2 months ago

How to watch Cambuur vs PSV Live in TV and Stream

If you want to watch the game Cambuur vs PSV live on TV, your options is: none.

What time is Cambuur vs PSV match for Eredivisie?

This is the start time of the game Cambuur vs PSV of 1st October 2022 in several countries:

Pol Van Boekel will referee the match at the Cambuur Stadion.
8:12 AM2 months ago

The probable PSV team for the match is: Benitez, Mwene, Teze, Obispo, and Max; Veerman, Til, and Sangare; Salibari, Gakpo, and Simons.
8:07 AM2 months ago

PSV leads the competition with 18 points, tied with Ajax, one above AZ and two below Feyenoord, while Cambuur is in the relegation zone, in 17th place with four points, tied with Emmen and Fortuna Sittard, and one below Vitesse and Volendam.
7:52 AM2 months ago

PSV in turn comes from two wins. The first, 1-0, was over RKC, with a goal from Gakpo on the 11th. After that, on Sunday (18), the victory was 4-3 over Feyenoord, with goals from Braithwaite, Gakpo, Til and Obispo, while Idrissi, Danilo and Kokçu scored for Feyenoord.
7:47 AM2 months ago

Cambuur come in poorly for the match, having been defeated 1-0 at home to Groningen, with a goal by Suslov, on the 11th, and being thrashed by RKC away on Saturday (17th) by 5-1, with Jacobs opening the scoring, Kramer seeking the equalizer and Tol (against), Bakkali, Bel Hassani and Kramer again building on the comeback.
7:42 AM2 months ago

Welcome to VAVEL.com’s coverage of the 2022-23 Eredivisie match: Cambuur vs PSV Live Score!