Thank you here for listening to this match of the Primeira Liga. Have a good night and see you next time!

Without goals in a game of few chances, Benfica draws away from home with Vitoria!

Substitution in Vitória: out came André André and in came Dani Silva.
4:22 PM2 months ago

Yellow for Lameiras, for a foul in the field of attack.
4:20 PM2 months ago

Substitution in Vitória: Afonso and Da Luz left for Johnston and Ogawa.
4:11 PM2 months ago

At Safira's face-to-face exit, Odysseas just went for the striker's legs, knocked down the number nine and gave Vitória the maximum penalty. After the VAR review, the referee removed the penalty and Safira was yellow carded for simulation, and the goalkeeper's yellow card was also removed!
3:59 PM2 months ago

Triple substitution in Benfica: Gonçalo Ramos, David Neres and Florentino Luís left to the entrance of Draxler, Musa and Aursenes.
3:51 PM2 months ago

Double substitution in the victory: left Jota Silva and Anderson Silva to the entry of Lameiras and Safira.
3:36 PM2 months ago

Zé Carlos hit the ball from outside the area and sent it to the left side of the goal.
3:34 PM2 months ago

Anderson makes the first touch on the ball and it rolls into the second half!
3:33 PM2 months ago

In a game of very few chances, Vitoria and Benfica tie the match and take a point each!
3:10 PM2 months ago

At the first post Gonçalo Ramos managed to get a deflection, but sent the ball over the goal.
2:53 PM2 months ago

In the cross coming from the left from Bamba Jota Silva's head was deflected, but in the hands of Odysseas.
2:32 PM2 months ago

Gonçalo Ramos makes the first touch on the ball and it rolls into the first half of the match!
2:29 PM2 months ago

Benfica is scheduled and will field with: 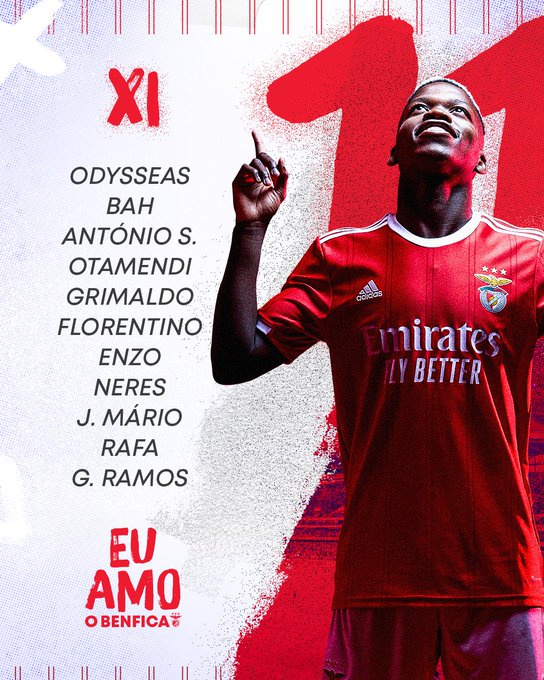 Vitória is scheduled and will field with: 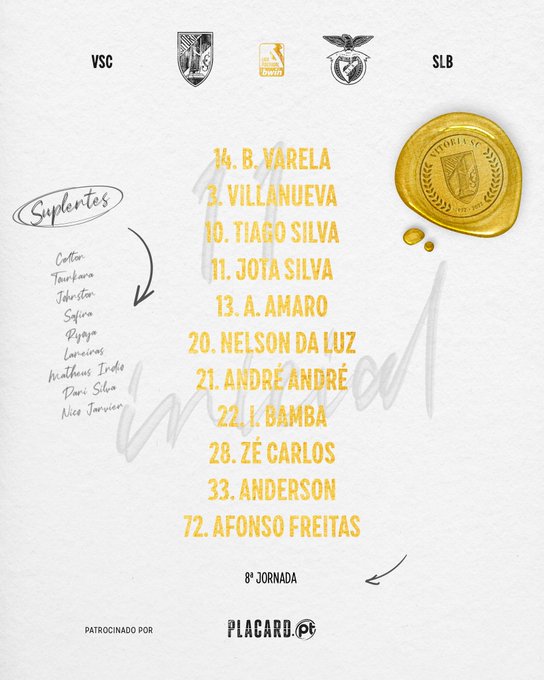 We now begin the broadcast of the Primeira Liga match between Vitória and Benfica!

Do not miss a detail of the match with the live updates and commentaries of VAVEL. Follow along with us all the details, commentaries, analysis and lineups for this Vitória vs Benfica match.
1:24 PM2 months ago

How to watch Vitória vs Benfica Live in TV and Stream

If you want to watch the game Vitória vs Benfica live on TV, your options is: none.

If you want to directly stream it: Streaming services and GolTV, GolTV Español, RTPi app.

What time is Vitória vs Benfica match for Primeira Liga?

This is the start time of the game Vitória vs Benfica of 1st October 2022 in several countries:

Rui Costa will be the match referee, with João Bessa Silva and Carlos Martins as assistants. Luís Ferreira will be in charge of VAR.
1:09 PM2 months ago

The likely Vitoria team for the match is: Varela, Amaro, Villanueva, and Bamba; Carlos, André, Silva, and Sá; Lameiras, Silva, and Luz.
12:59 PM2 months ago

Vitória will not be able to use the injured Miguel Maga, Bruno Gaspar and Jorge Fernandes. Benfica cannot use Tomas Tavares, João Victor, Lucas Veríssimo and Felipe Morato, all injured.
12:54 PM2 months ago

Benfica leads the competition with 21 points, followed by Braga and Porto, both with 19 points. Vitória is in ninth position with 10 points, one below Estoril, one above Gil Vicente and two above Chaves and Arouca.
12:49 PM2 months ago

Benfica in turn comes from two wins, where, on the 14th, beat Juventus in the Champions League by 2-1, with Milik opening the scoring, João Mário equalizing and David Neres turning. And on Sunday (18), the victory was over Marítimo, 5-0, with goals by Rafa Silva, Gonçalo Ramos (2), David Neres and Draxler.
12:44 PM2 months ago

Vitória comes into the game on the back of a win and a draw in their last few games. The victory came on the ninth, by 1-0, over Santa Clara, with Anderson scoring the match goal. The tie was with Arouca, on Sunday (18), 2-2, with Bukia and Quaresma scoring for Arouca, while Anderson and Lameiras scored for Vitoria.
12:39 PM2 months ago