Thank you for listening to this LaLiga match. Have a good night and see you next time!

Sergi Darder opened the scoring and was about to create an even bigger crisis for Atleti, but Joao Felix came in to equalize and give the hosts a point!

Molina, on the edge of the area, managed to get a shot off, but it went to the left side of the goal again!
10:00 AM3 months ago

And in the cross from the left Giménez got the shot, but sent it to the left side of the goal, missing a great chance to turn the game!
9:58 AM3 months ago

João Félix received the ball inside the box and hit it hard, but Lecomte saved it!
9:51 AM3 months ago

Double substitution in Espanyol: Oscar Gil and Aleix Vidal left for El Hilali and Lozano.
9:45 AM3 months ago

A cross into the box from the right by Llorente, João Félix managed to get a strong header, but Lecomte saved Espanyol from an upset!
9:42 AM3 months ago

João Félix received the ball on the left, charged and hit it hard, into the corner of Lecomte, who could do nothing but watch the game tie!
9:35 AM3 months ago

Double substitution at Atlético: Griezmann and Morata left to enter Lemar and Matheus Cunha.
9:28 AM3 months ago

In a corner kick taken in the area Giménez managed to get a header, but it went to the right side of the goal. And now there are double substitutions for Atleti: Carrasco and Kondogbia left for Witsel and João Félix.
9:26 AM3 months ago

At the cross in the area coming from the right Joselu managed to get the header to the middle, arranging for Sergi Darder to get a high shot to open the score away from home!
9:23 AM3 months ago

Yellow for Kondogbia, for a strong foul in the defensive field.
9:18 AM3 months ago

Double substitution at Espanyol: Braithwaite and Brian Oliván left for Javi Puado and Simo Keddari.
9:16 AM3 months ago

Carrasco crossed the ball into the box and Giménez headed it over the goal.
9:15 AM3 months ago

Yellow now for Braithwaiter, for holding Kondogbia in Atleti's attacking play.
9:08 AM3 months ago

Morata takes the first touch and the ball rolls into the second half of the match at the Wanda Metropolitano.
9:07 AM3 months ago

The teams return to the field to start the second half. At Atleti De Paul left and Correa came in.
8:53 AM3 months ago

After the expulsion Atleti began to press more and try to attack more often, but without managing to create chances and so ends the first half, and the booing of the crowd at the final whistle!
8:41 AM3 months ago

Espanyol substitution: Bare is out and Sergi Gómez is in.
8:37 AM3 months ago

Reinildo took to the end line and crossed low, but Llorente got under the ball and sent it over the goal. And then Oliván was yellow carded for bringing down Morata.
8:31 AM3 months ago

On the counter-attack where Morata was released in front, Cabrera made the strong foul and received a straight red for being a clear goal chance!
8:30 AM3 months ago

It is a game, so far, of very few attacks. Atleti, led by Griezmann, dominates, but without creating any great chances.
8:05 AM3 months ago

Griezmann shot from outside the area and sent it through the right side of the goal.
8:03 AM3 months ago

Braithwaite gets the first touch on the ball and it rolls into the first half of the match!
8:00 AM3 months ago

The teams take the field to start the match!
7:23 AM3 months ago

The players take to the pitch at the Wanda Metropolitano to start warming up.
7:15 AM3 months ago

Espanyol is lined-up and will field: 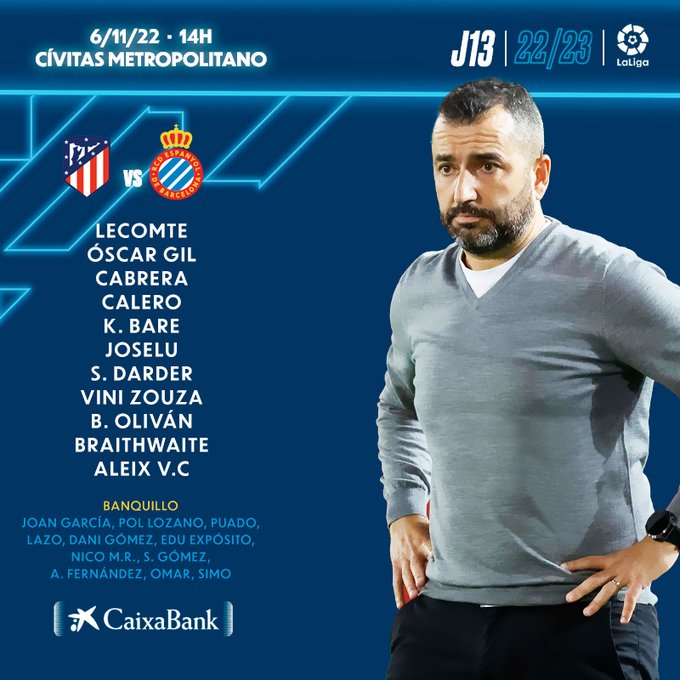 Atlético is lined-up and will field: 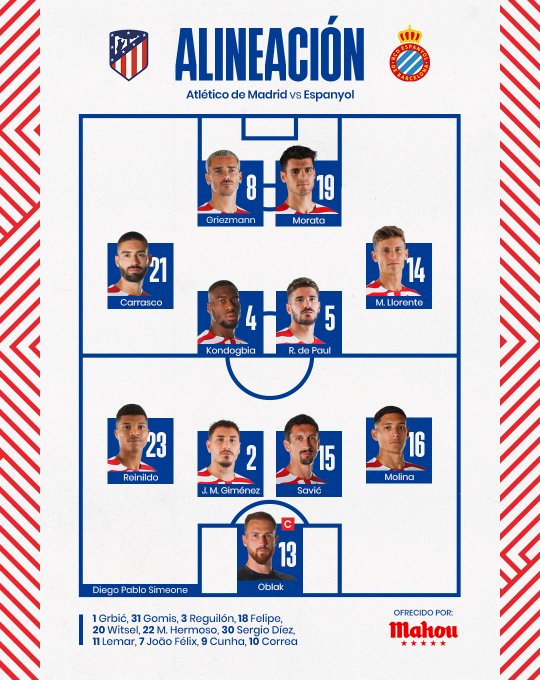 We now begin the broadcast of the LaLiga match between Atlético de Madrid and Espanyol!
7:00 AM3 months ago

Do not miss a detail of the match with the live updates and commentaries of VAVEL. Follow along with us all the details, commentaries, analysis and lineups for this Atlético Madrid vs Espanyol match.
6:55 AM3 months ago

If you want to watch the game Atlético Madrid vs Espanyol live on TV, your options is: none.

What time is Atlético Madrid vs Espanyol match for LaLiga?

This is the start time of the game Atlético Madrid vs Espanyol of 6th November 2022 in several countries:

Juan Luis Pulido Santana will be the referee of the match, with Ignacio Iglesias Villanueva and Iker De Francisco Grijalba as assistants.
6:40 AM3 months ago

The probable Espanyol team for the match is: Lecomte, Olivan, Cabrera, Gomez and Gil; Exposito, Souza and Sergi Darder; Puado, Joselu and Braithwaite.
6:35 AM3 months ago

Atlético's probable team for the match is: Oblak, Reinildo, Giménez and Savic; Carrasco, Witsel, Kondogbia, De Paul and Correa; Morata and Griezmann.
6:30 AM3 months ago

Atleti will not be able to use the injured Koke and Lemar, Llorente may follow out, also injured, along with Saul, who is suspended. Espanyol will be without the injured Pedrosa and Sánchez, the team's only absentees.
6:25 AM3 months ago

Simeone commented about the elimination in the last position of the group in the Champions League, about his permanence in the team, where there are rumors about a non-renewal of contract, but also took the opportunity to leave an 'indirect' for - possibly - João Félix: "We were in last place in a deserved way. We have to learn. Europe is behind us, now the league is left. On Sunday, we hope to regain our strength to play a good game. We will react with work, calm and looking at the situations that in the Champions League caused us this difficulty to defend in every game, especially away from home, and also not being able to score. We will work for what we have left: LaLiga and the Copa del Rey. When you are so long identified with something, it's because you have passion. If not, you wouldn't do it. The day this goes out, I'll go somewhere else, because I can't give half. It's either everything, or nothing. If I have to guide myself through a cycle, by my fourth year I was being told the cycle was over. "I have youngsters who have been playing for some time in the team and who think they are Maradona. When I don't put them in, total frustration happens, and then when they come in, that frustration stays in their brain and prevents them from showing their best version."
6:20 AM3 months ago

Atlético are in third position with 23 points, tied with Betis and Osasuna, one point above Real Sociedad and two above Athletic Bilbao, closing in on nine below Real Madrid. Espanyol is in 16th place with 11 points, tied with Celta and Cadiz, the latter being the first in the relegation zone, and one above Sevilla and two below Girona and Mallorca and three below Getafe.
6:15 AM3 months ago

Espanyol on the other side comes to the match after two draws and one defeat. The defeat came first, to Osasuna, away from home, on the 20th, with Budimir scoring the only goal of the match. After that, on Sunday (23), the draw was at home, 2-2, with Elche, with goals from Puado and Braithwaite for the home team, while Peña and Verdú scored. Finally, on Friday (28), the draw was away, 1-1, with Mallorca, with Muriqi opening the scoring and Romero equalizing.
6:10 AM3 months ago

Atletico Madrid come into the match on the back of two defeats and a draw in their last few games. The tie was in the Champions League, at home, with Leverkusen, on Wednesday (26), which ended 2-2, with goals from Diaby and Hudson-Odoi for the visitors and goals from Carrasco and De Paul for the hosts. After that, on Saturday (29), the defeat came away from home, 3-2, to Cadiz, with Bondonda opening the scoring, Fernandez extending, while John Felix sought the equalizer, but Sobrino scored and gave the victory to the hosts. Finally, on Tuesday (01), the defeat was to Porto, in the Champions League, away from home, with Taremi opening the scoring and Eustáqui scoring the second, while Marcano, in an own goal, scored an own goal at the end, eliminating Atleti from the competition still in the group stage.
6:05 AM3 months ago