This Group B match is over, England gets its first 3 points in the competition, the English dominated the 90 minutes, with great scores from this new revolution in the national team with Saka, Rashford, Grealish and Bellingham.
Iran tried with two goals from striker Mehdi Taremi. 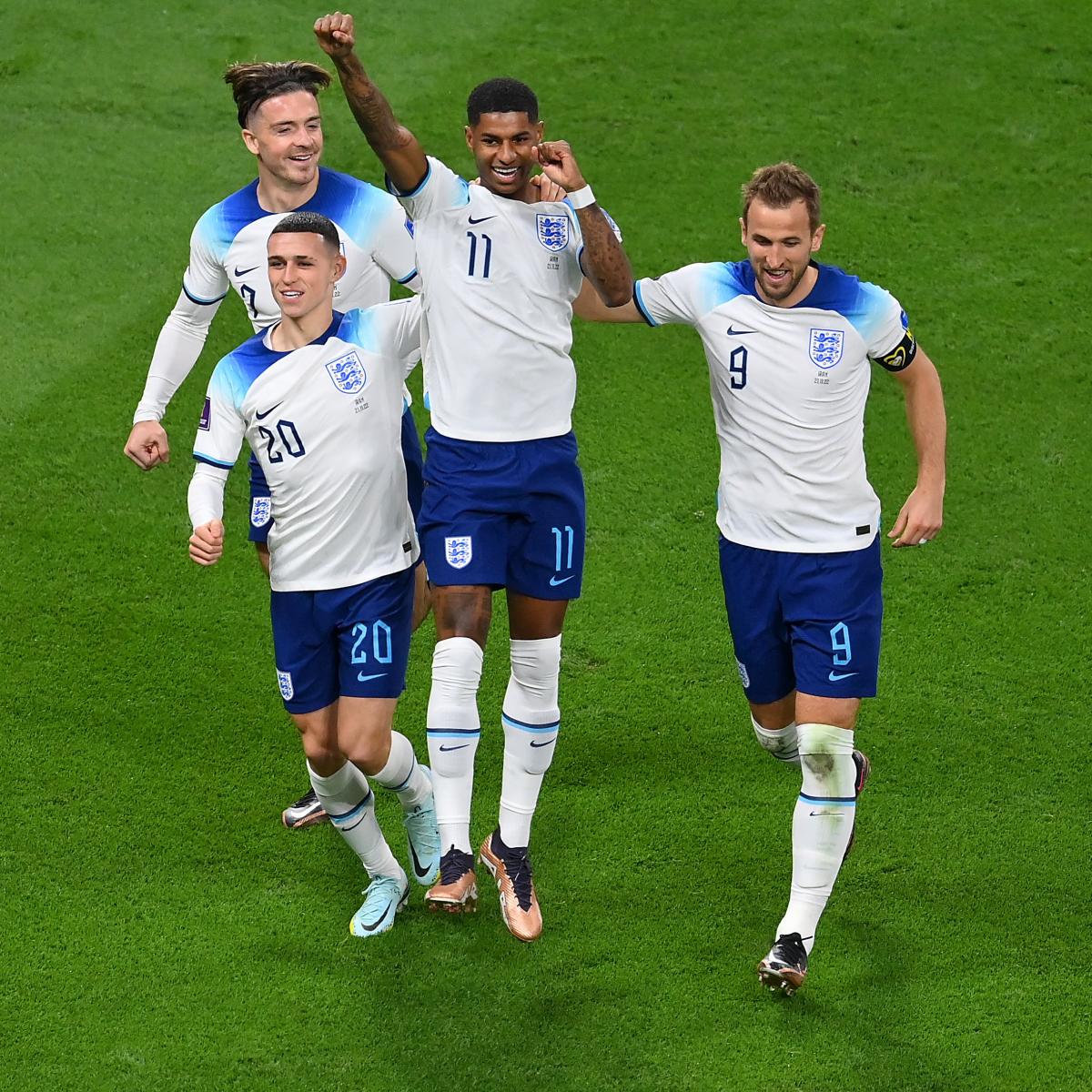 It goes to the Var!

It was a close call!
Sardar Azmoun sends a great shot and Jordan Pickford with great reflexes avoids Iran's second.
10:02 AM14 days ago

Sixth goal!
England score goal number six, approaching the 90th minute and Jack Grealish pushes it home with an assist from Callum Wilson. We leave with 10 minutes left in regulation time.
9:57 AM14 days ago

We've reached the final stretch!
We are close to 90, England are looking for the sixth goal of the morning, but Iran is not stopping and presses the English looking for the second.
9:47 AM14 days ago

Again!
Taremi is again encouraged to hit it, but his shot goes wide. Also, Harry Kane is withdrawn goalless, entering Callum Wilson.
9:43 AM14 days ago

The goal is here!

Marcus Rashford scored the fifth of the night seconds after coming on, a good individual play and the Manchester United player sent it into the goal, his first goal in a World Cup.

He will not be able to continue!
Harry Maguire can't continue, England's Eric Dier, Phil Foden, Marcus Rashford and Jack Grealish are substituted. Iran grew with their score, looking on top on offense.

The scorers Saka and Sterling leave.

A touch on goal and the fourth goes in!

Pickford sees the ball go through his goal, but without danger.

The 60th minute is reached and the pace of the match increases with Saka scoring his brace.

Once again England, after a play by Iran that is not finished, the English counterattack is launched and Raheem Sterling sends the ball over the top. Ending in an unsuccessful corner kick for Southgate's team.

Harry Kane was stopped near the Iranian penalty area, causing a free kick for England, Kieran Trippier shoots, but hits the barrier, subsequently the full-back is stepped on, ending up on the ground, but will be able to continue.

England dominates the match, with two young debutants scoring in their first World Cup, Saka and Bellingham. In addition, Raheem Sterling scored the third goal of the morning. 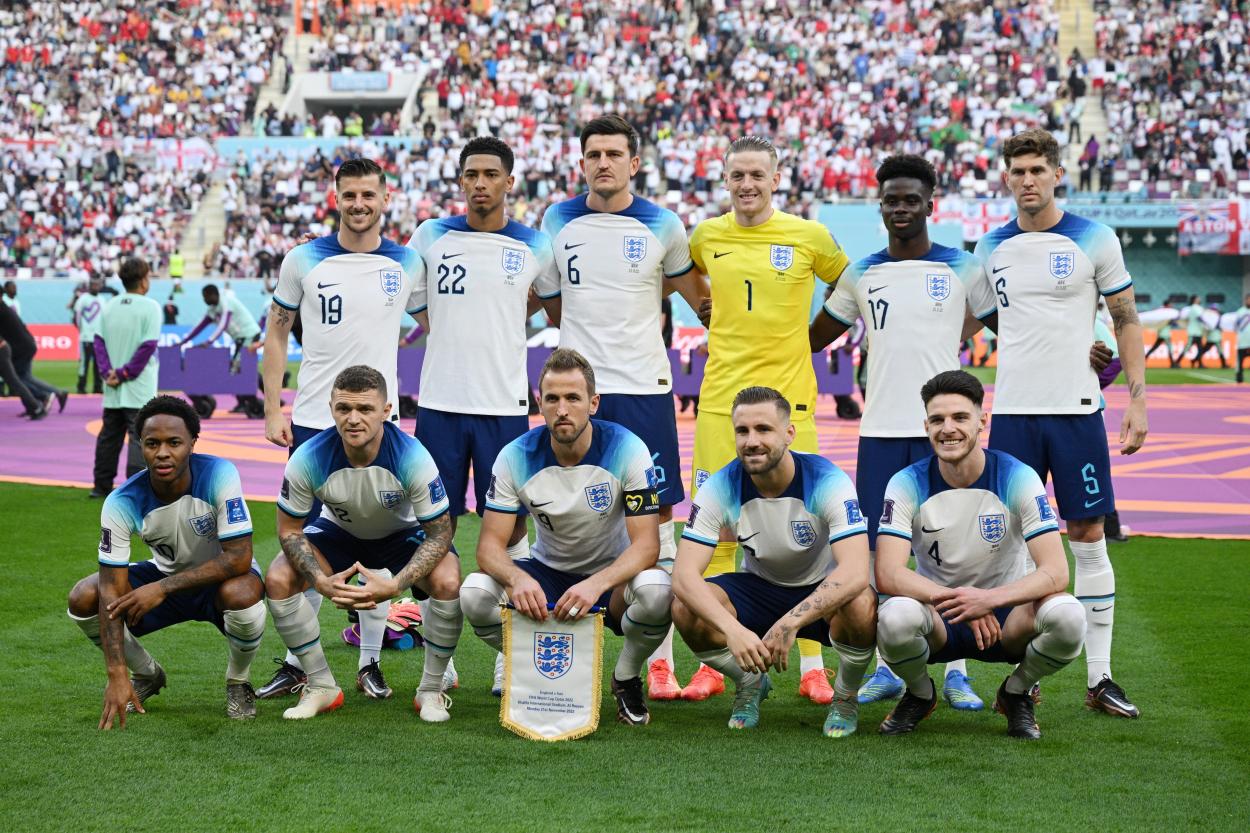 Iran's first!
Jahanbakhsk hit the ball inside the English box, but the shot was unsuccessful. However, if the ball had gone in, the goal would have been disallowed for early possession. We are minutes away from the end of the first half.
8:53 AM14 days ago

The referee gave 14 minutes of added time due to the loss of time in medical assistance to goalkeeper Alireza Beiranvand. England wastes no seconds looking for yet another score, keeping the ball with great possession.

It was the third!
England's goal, Harry Kane's assist straight to Sterling, the Chelsea winger scores the third of the morning, Iran's defenders have not been able to stop the English attack.
8:45 AM14 days ago

Here comes the second!
England's goal, now Arsenal youngster Bukayo Saka gets on the end of a great volley in the six-yard box from Harry Maguire's header, which Saka takes advantage of and scores the second.
8:38 AM14 days ago

First up!
England's goal, a good cross from Shaw finds young Bellingham, who finishes inside the box, scoring the first goal of the morning.
8:33 AM14 days ago

It was a close call!
Again England, Maguire had the first of the morning, he headed inside the box, hits the crossbar.
8:31 AM14 days ago

It was a close call!
Saka sends the cross into the box, Mason Mount had it close, he shoots inside the box but unsuccessfully, passing close to the net.
8:29 AM14 days ago

Saka had a try!
The Arsenal winger tests goalkeeper Hosseini, with a very weak shot Saka had the first of the morning, but England is already touching Iran's goal again.
8:23 AM14 days ago

The first one!
Iran has already reached the English territory, with an unsuccessful free kick, England has the ball back, coming from behind looking to attack.
8:20 AM14 days ago

Goalkeeper Alireza Beiranvand goes to the ground, asking to be substituted as he is dizzy, after the collision with his defender, substitute goalkeeper Hossein Hosseini comes in.

After the collision, the goalkeeper Alireza Beiranvand continued in the match, after the medical staff treated the goalkeeper perfectly, stopping the change.

It was a close call!
The Iranian defense fell asleep, Harry Kane sent in the cross, the shot caused a collision between Alireza Beiranvand and his defense, but Maguire was already in the back and couldn't score.

We reach the 5th minute, the English take possession of the ball, Iran tries to steal the ball, but only sees it pass.

The ball is rolling at the Jalifa International Stadium.
7:55 AM14 days ago

They go out to the field

Both teams take the field, and in a few more moments the anthems of England and Iran will be played.
7:45 AM14 days ago

Both teams are already doing stretching exercises, prior to the start of the England vs. Iran Group B game at the Jalifa International Stadium.
7:38 AM14 days ago

This new group of Englishmen is characterized by the youth of its squad, with Jude Bellingham as the youngest player at 19 years old, Phil Foden and Bukayo Saka two other promising young players whose age does not exceed 22 years old.
7:33 AM14 days ago

The English national team has not reached a final since 1966 where they were champions, the closest was Russia 2018 where they reached the semifinal, but lost to Croatia and in the game for third place they lost to Belgium, finishing in fourth place.
7:28 AM14 days ago

Keep an eye on this fact

Iran's national team has failed to advance from the group stage in all their World Cup appearances, from 1978 which was their first World Cup until Russia 2018 where it was their best performance with one win, one loss, one draw and getting 4 points.
7:23 AM14 days ago

The two teams have already arrived at the stadium, just minutes away from warming up, after which the action will begin at the Jalifa International Stadium. 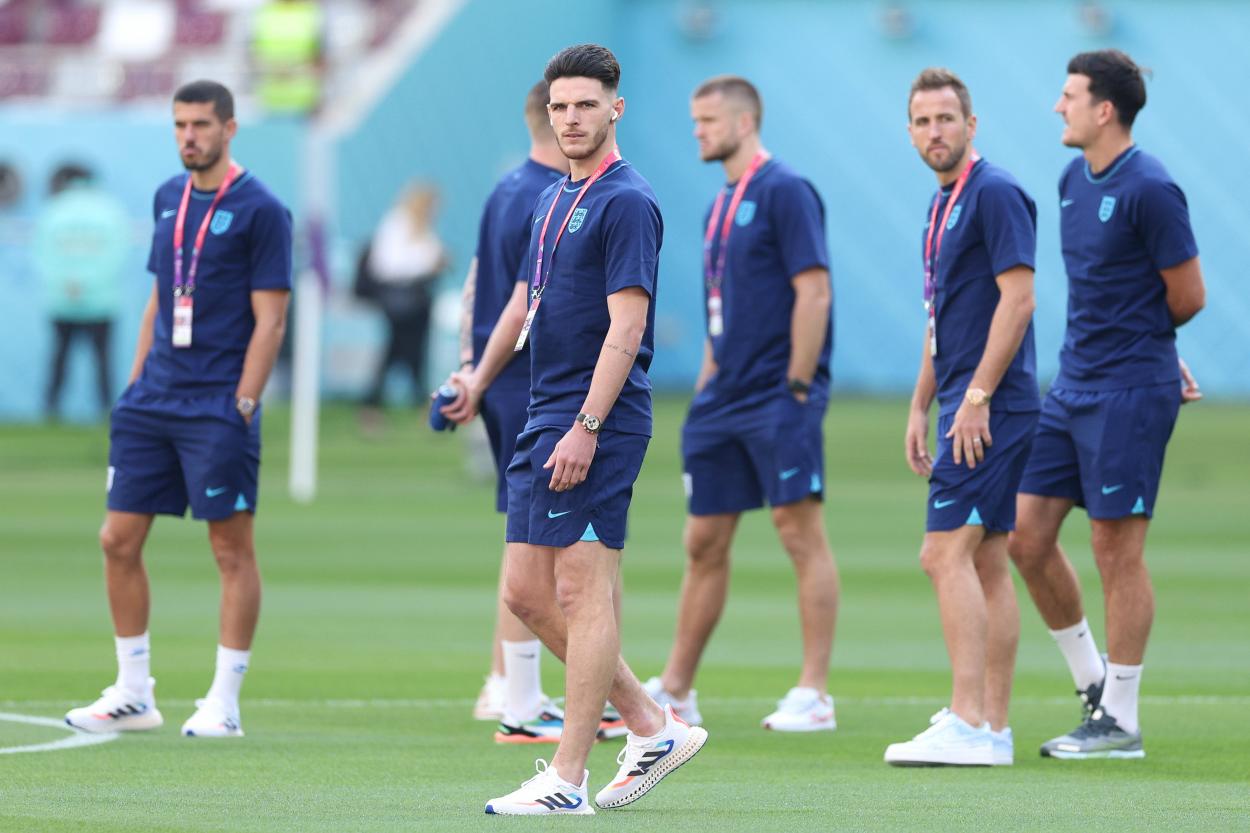 We are just a few minutes away from the start of this game between England vs Iran, from the Jalifa International Stadium, corresponding to the first game of Group B. In a few moments we will share with you the line-ups of the teams, with many surprises on both sides.
7:13 AM14 days ago

We are back for a minute-by-minute coverage of the match between Emirates England vs Iran. We will shortly share with you the confirmed lineups, as well as relevant facts about the clash between these two teams.
7:08 AM14 days ago

In a few moments we will share with you the starting lineups for England vs Iran live, as well as the latest information from the Jalifa International Stadium. Stay tuned to VAVEL's minute-by-minute live online coverage of the match.
7:03 AM14 days ago

How to watch England vs Iran Live Stream on TV and online?

If you want to watch the game England vs Iran live on TV, your options is: Telemundo Deportes

What time is England vs Iran match for the in World Cup 2022?

This is the start time of the game England vs Iran of November 21 2022 in several countries:

Watch out for this Iranian player

Let's go with the experience with the veteran goalkeeper of Persepolis FC, Alireza Beiranvand with 30 years old is going to fulfill his second world cup with Iran. Russia 2018 was his first World Cup, being a starter in all 3 games, only allowing 3 goals in the whole group stage. The lack of positive results prevented Iran from reaching the round of 16. 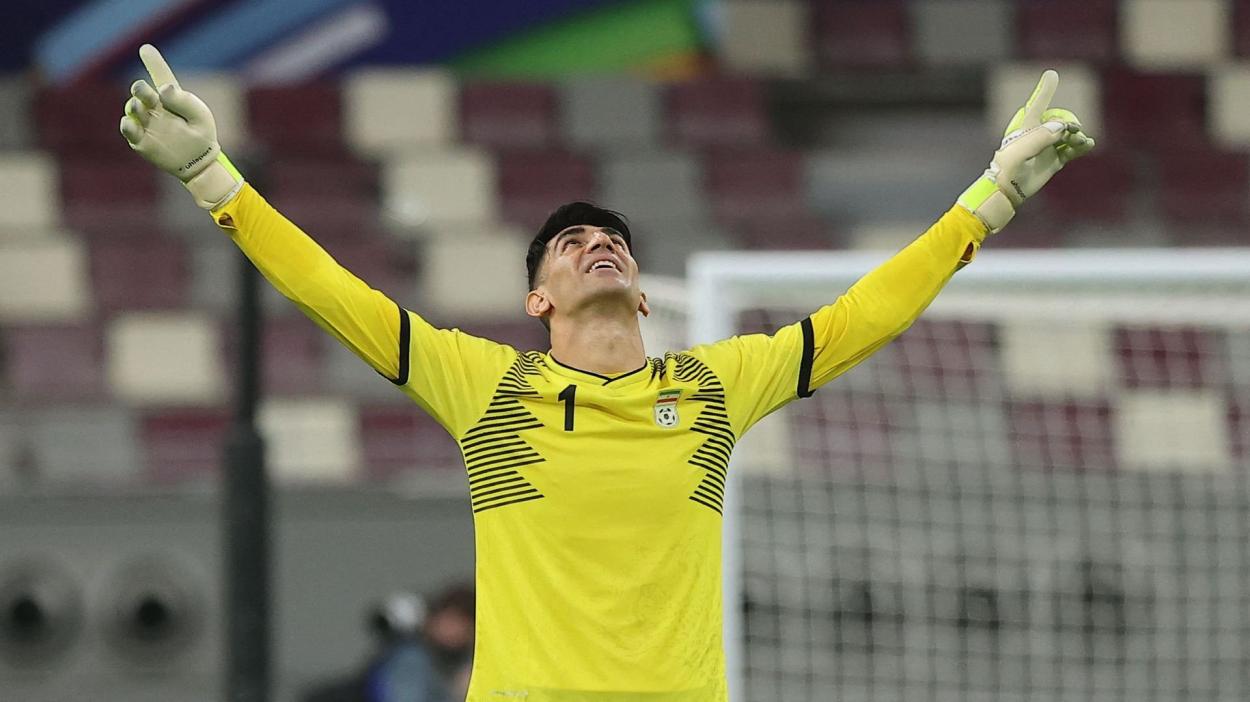 Watch out for this England player

This new generation of English players is characterized by youth, but also by experience one of them Harry Kane, the Tottenham striker and captain of the English national team.

In the last World Cup in Russia 2018, Harry scored 6 goals against Colombia, Panama and Tunisia. The 29-year-old striker is going for his second World Cup.

Starting with the 1966 world champions England, the English in the last World Cups have been far from being again in a final, in Russia 2018 they were close to touching the glory, winning the fourth place, being an acceptable performance after being eliminated in 2014 in the first phase and in 2010 reaching the round of 16.

How does Iran arrive?

"We are going to try to give a happiness to the Iranian people."

"The perception that Iran and all other Asian teams will be eliminated in the group stage only serves as additional motivation. Asian soccer is at its highest level."

Iran's national team opens against England, then faces Wales and closes the group stage against the United States. This will be historic because it will be the first time the English and Iranians will meet in a World Cup.

How does England arrive?

The English national team comes to a new World Cup, coming from a last match against Germany in the Nations League where Luke Shaw, Mason Mount and Harry Kane scored the goals.

After that match there was no friendly match before the start of the World Cup.

The path of the English will not be easy because the second test will be the United States and then Wales.

At the press day Eric Dier spoke to the media about the group that was formed, how he feels and his return to the national team: "I feel completely comfortable in any defensive position".

The English defender believes a lot in this new young group leading the national team: "I am in the England group, we are lucky to be here, there is a fantastic atmosphere, the guys know that to be successful in a tournament you really need to have an atmosphere within the team".

On his return to the England squad he added: "Not being in the squad for a while, after the European Championship was tough for me, I was very motivated to try and come back and try and be here at the World Cup, you know obviously that was a goal of mine, but at the same time during that time, I think I was just really trying to concentrate on Tottenham and playing well for my club, improving individually, being fit well, we knew there was a World Cup coming up and we all want to be part of one."

The stadium for England vs Iran today

The first match of group B between England vs Iran will be played at the Khalifa International Stadium, the home of the Qatar national team was inaugurated in 1976 but had a remodeling 5 years ago, where its capacity is for 45 thousand fans, located in Doha Qatar.
6:13 AM14 days ago

Welcome to VAVEL.com’s coverage of the 2022 in FIFA World Cup 2022 Match England vs Iran Live Updates!