WAS91
END5 hours ago

The duel between Argentina and Poland ends, the Albiceleste manages to win the match and qualify for the round of 16 of the World Cup.
3:52 PM2 months ago

The game is coming to an end! Argentina with a goal changes things in group C and Mexico would go through on goal difference.
3:38 PM2 months ago

Julián Álvarez took his shot from outside the area and almost scored Argentina's third goal.
3:29 PM2 months ago

GOOOOOOOOOL FOR ARGENTINA! GOAL BY JULIÁN ÁLVAREZ!
3:23 PM2 months ago

Nicolás Tagliafico hits it from the halfway line but his attempt is wide of the mark. Argentina goes for the second
3:19 PM2 months ago

Marcos Acuña receives a yellow card and is warned for the remainder of the match.
3:08 PM2 months ago

GOOOOOOOL FOR ARGENTINA! Mac Allister shoots in the area towards the goalkeeper's far post to score Argentina's first goal.
2:58 PM2 months ago

The first half of the match ends. Argentina and Poland are tied 0-0 at the moment.
2:47 PM2 months ago

Three minutes are added in Doha, we will see if a goal falls in this final lapse of the match.
2:39 PM2 months ago

SZCZESNY'S SAVE! He saves Messi's penalty and 0-0 draw prevails
2:37 PM2 months ago

Enzo Fernandez tried to score again but his shot went wide of the goal
2:35 PM2 months ago

THE GOAL WAS ALMOST SCORED! Di Maria took the corner kick and the ball went dramatically towards the goalkeeper's far post, but Szczesny made a good save to keep the ball out of his net.
2:30 PM2 months ago

POLAND IS SAVED! A rebound was left to Marcos Acuña and he sent a shot that went just wide of the Polish goalkeeper's post.
2:28 PM2 months ago

Poland is beginning to close its ranks and avoid getting forward, Argentina has begun to dilute its attacks on the ends of the field.
2:25 PM2 months ago

The European team uses as a fundamental tool the deliveries to Robert Lewandowski. Great work by Otamendi and Cuti Romero to control the Barcelona striker.
2:21 PM2 months ago

Julián Álvarez headed inside the area and the ball went just over the crossbar.
2:18 PM2 months ago

Messi wants his goal! The Argentine 10 hit the ball with everything he had but his attempt went over the crossbar.
2:14 PM2 months ago

Molina hits it from outside the box, looking for the near post, but Bielik sweeps in and prevents the ball from going through.
2:10 PM2 months ago

Messi dribbles between the defenders and takes a shot looking for the goalkeeper's far post, but Szczesny saves and gives security to the Polish defense.
2:08 PM2 months ago

ARGENTINA IS SAVED! Poland came out on the counterattack and Robert Lewandoski almost put the ball away, but Acuña's great cross saved the first.
2:03 PM2 months ago

Barely 1 minute in and Messi is already in the match, breaking Maradona's record of 22 World Cup appearances.
2:00 PM2 months ago

The duel between Argentina and Poland begins, both teams are fighting for a place in the round of 16 of the Qatar 2022 World Cup.
1:43 PM2 months ago

In a couple of moments we will start broadcasting the match between Argentina and Poland, a duel corresponding to the group stage of the Qatar 2022 World Cup.
1:43 PM2 months ago

This is the lineup that sends Argentina's squad to try to beat Poland and get the three points. 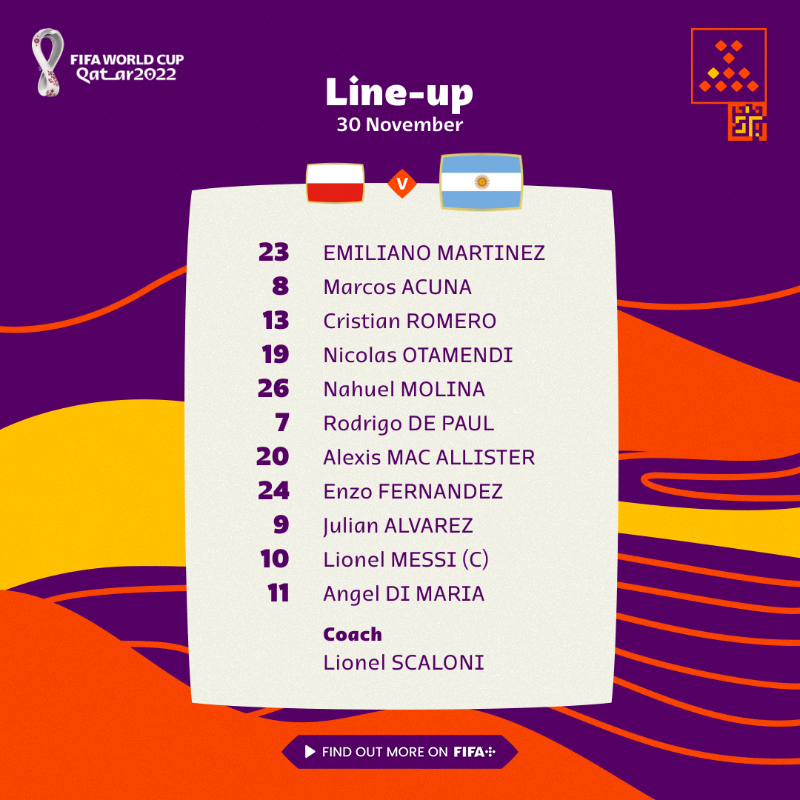 This is the lineup that sends Poland's squad to try to beat Argentina and take the three points. 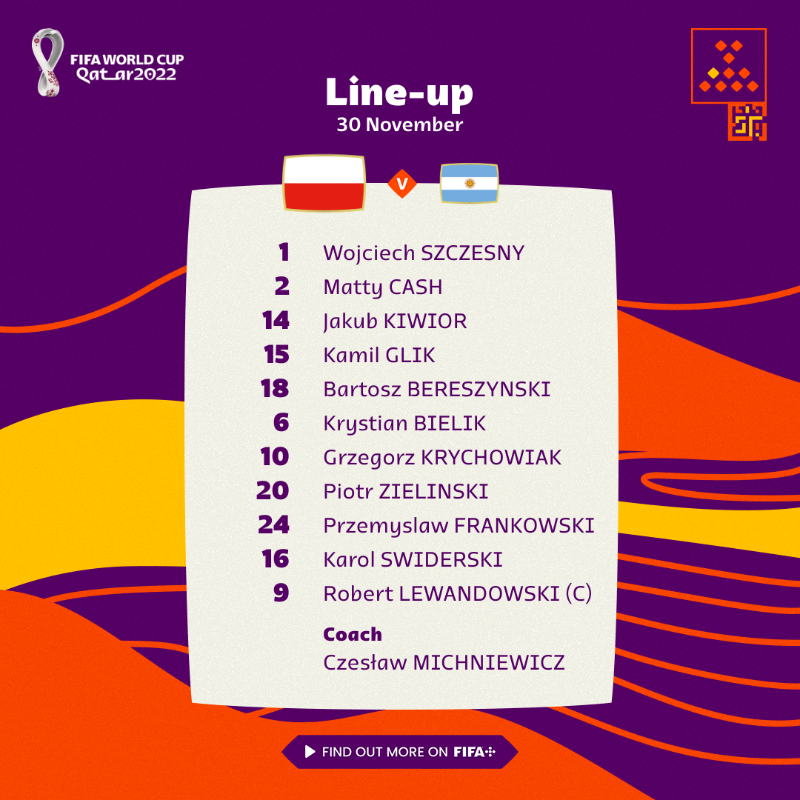 IT IS IMPOSSIBLE TO STOP MESSI

THEY EXPECT A TOUGH MATCH

Scaloni also mentioned in the conference that expecting a variation in Poland's system of play for this qualification match:
"Poland has a good game idea and the players themselves in the match can change the system. But I do believe that when facing Argentina always or almost always the opponent who has played the previous match plays against us in a different way. We expect something similar to this. Even though the players may be the same, they will adapt to our game. That doesn't mean they won't battle us".
1:17 PM2 months ago

THEY KNOW THE DANGER OF LEWANDOWSKI

Scaloni, D.T of the Argentina National Team referred to the Barcelona and Poland striker as a great player and says he is privileged to have him on the pitch.
"He is a great player. It is a privilege and a pleasure to see him up close...As to whether he has Leo's level, we have to enjoy him. We must not compare him with the others. Let's enjoy him and that's all.
1:08 PM2 months ago

On the other hand, Poland came to the second day of the group stage to face a Saudi Arabian team that had surprised the world after beating Argentina. The match started very dynamically on both sides, with Arabia playing with a quick touch and speed, while Poland was looking for a counterattack to score an advantage. Soon Poland's strategy began to pay off with Zielinski's goal in the 39th minute and late in the game, Robert Lewandowski scored the final 2-0 to give Poland three points.
1:07 PM2 months ago

In their last match, the Argentine team faced Mexico in the second matchday of the group stage of Qatar 2022. The albiceleste team had the mission of getting the victory, as another result could put the last nail in Argentina's coffin. The first half was very even between the two teams as Mexico was very well positioned on the field, preventing Argentina from creating any danger. In the second half, the match was broken and Leo Messi scored the goal to break the tie at 1-0, and later, Enzo Fernandez scored the 2-0 to seal the Argentinean triumph.
1:05 PM2 months ago

The wait is over in Qatar, the actions of the FIFA 2022 World Cup continue with the duel between Argentina and Poland as a duel corresponding to the group stage of day 3 in group C to define one of the two qualifiers to the round of 16. Both teams have a chance of advancing to the next round, however, they must win, as this is the only way to secure their ticket to the round of 16, as any other result would jeopardize their continuity in Qatar 2022.
10:30 AM2 months ago

Do not miss a detail of the match with the live updates and commentaries of VAVEL. Follow along with us all the details, commentaries, analysis and lineups for this Poland vs Argentina match.
10:25 AM2 months ago

What time is Poland vs Argentina match for World Cup Match 2022?

This is the start time of the game Poland vs Argentina of 30th November in several countries:

Watch out for this Argentina player:

The player to watch for this match will be the one and only Leo Messi, who is in charge of generating joy for all the Argentine people who dream of lifting a World Cup again with their maximum world idol and for many considered the best player of all time. Leo Messi will be in charge of leading the entire Argentine squad to obtain the victory in this match and to find the perfect formula so that all the passes and shots to goal come from his left foot. 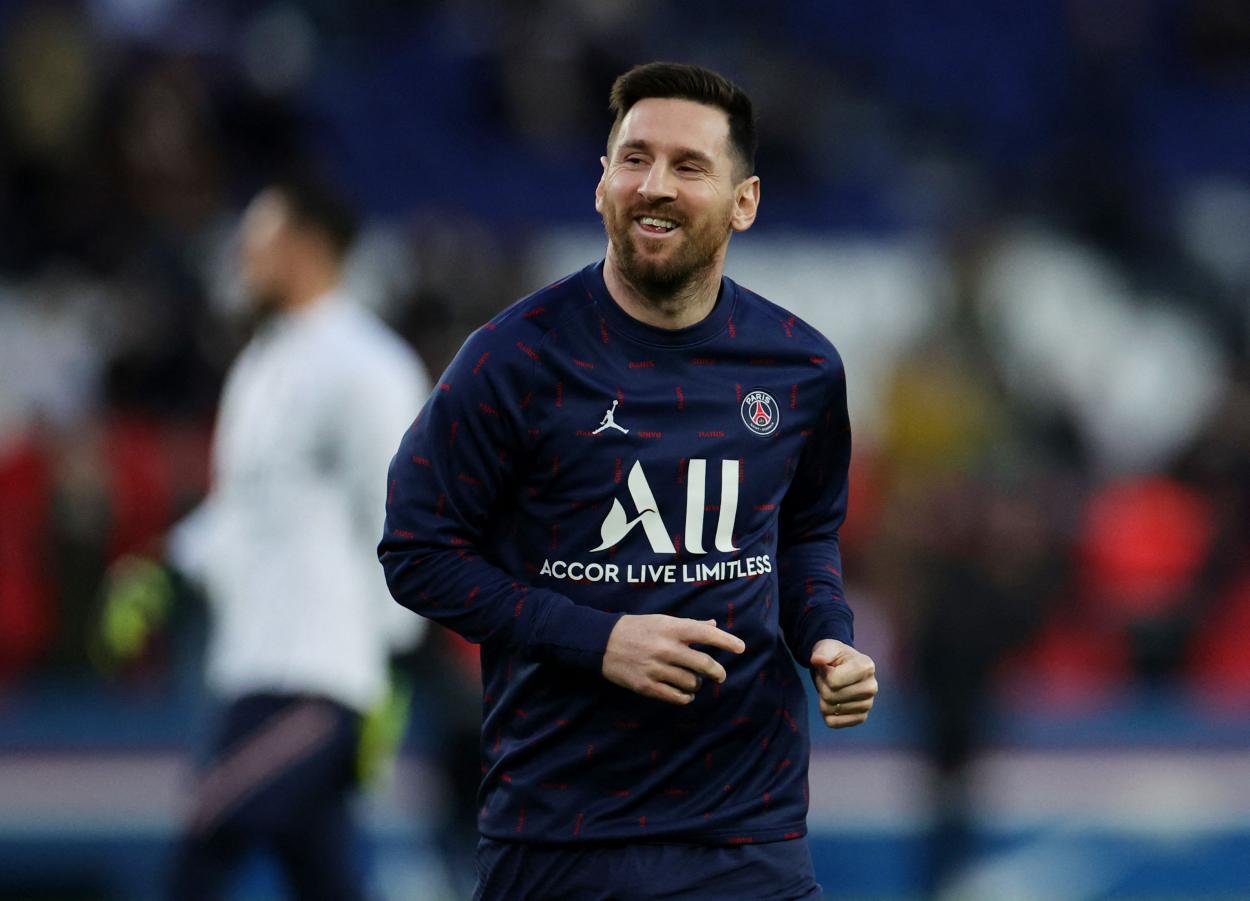 Watch out for this player from Poland:

The player to watch in these 90 World Cup minutes will be the star of Barcelona and the offensive benchmark of the Poland National Team, Robert Lewandowsky. The Polish killer has become Poland's offense because of his great agility to move behind the backs of the defensive defenders, his spectacular shot from outside the box from any part of the field and his great astuteness to shoot at goal despite the mark he may receive during the game. In this match, Poland will have to play excellent to generate chances that Lewandowsky can take advantage of and tip the scales in Poland's favor. 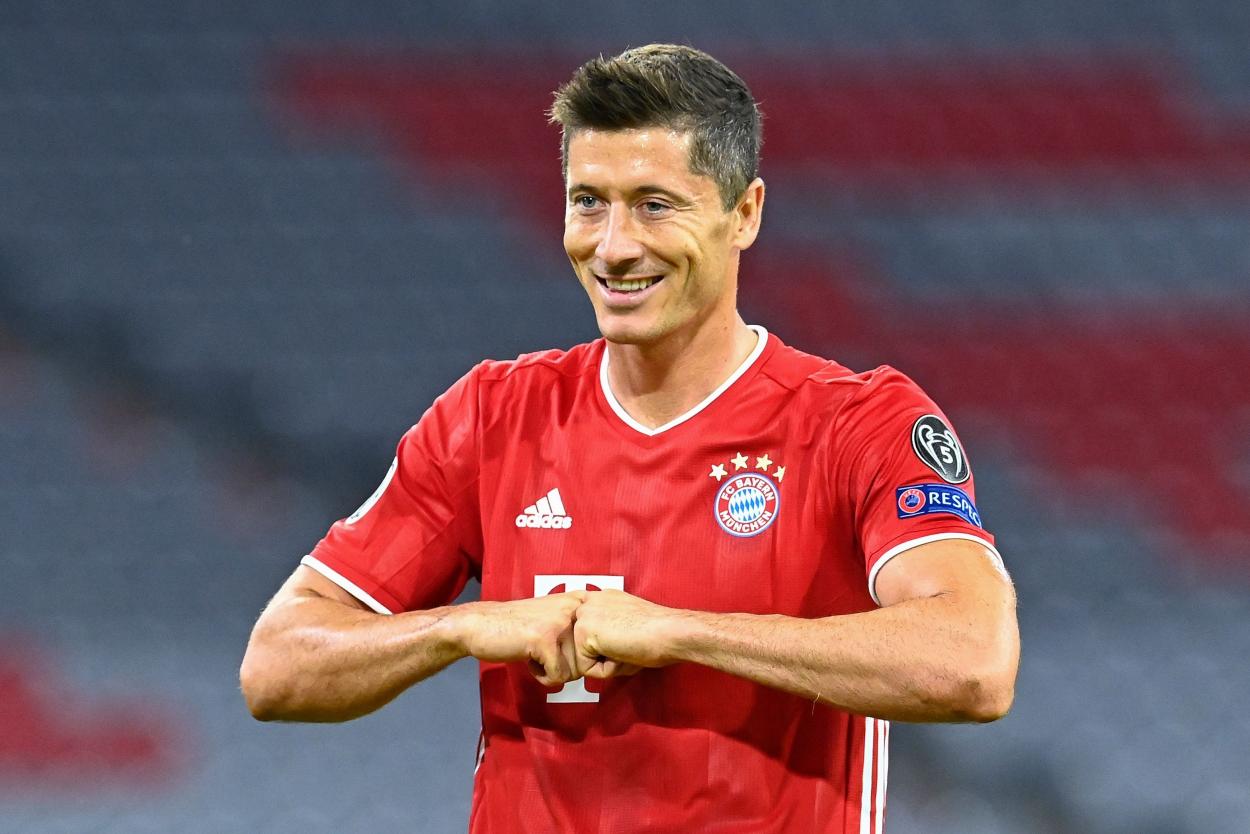 Poland and Argentina have met on a total of 11 occasions (3 wins for Poland, 2 draws and 6 wins for Argentina) where the advantage leans in favor of the Argentines. In terms of goals, the Albiceleste team has scored 18 goals against Poland, while the Poles have scored 12 against Argentina.  Their last meeting was a friendly match in 2011, where the Poles won by a score of 2-1.
9:55 AM2 months ago

The 974 Stadium is a sports venue dedicated to the practice of soccer at a professional level, it is located in Doha, Qatar and was inaugurated on November 30, 2021 to host matches of the Qatar 2022 World Cup with a capacity for 40,000 spectators. At the end of the tournament, the stadium will be dismantled.

A curiosity of this enclosure, is that it is mostly made of containers to avoid spending on new materials and continue polluting the environment, being an architectural jewel of the Persian Gulf country.

The 974 Stadium in addition to hosting the duel between Poland and Argentina, will still host the matches between Serbia and Switzerland and the round of 16 between the first place of group G and the second place of group H.

They will be looking to seal their place in the round of 16.

The Albiceleste team is still alive in this Qatar 2022 World Cup after defeating Mexico by a score of 2-0, which was enough for them to get their first three points and reach the second place in Group C, putting a foot and a half in the round of 16. However, not everything is settled yet, because if they lose against Poland and Mexico or Arabia wins, the Albiceleste will be out of the World Cup, so winning this match will be key if they want to keep fighting to win the FIFA title.
9:45 AM2 months ago

The Polish national team has one foot and a half in the round of 16 of the Qatar 2022 World Cup, but in order to do so, they will have to get the three points against Argentina to seal their ticket to the next stage of the World Cup. The Polish team debuted with a 0-0 draw against Mexico and then managed to win against Saudi Arabia by a score of 2-0, reaching 4 points that put them almost in the round of 16, now, they are just one step away from breaking their bad streak of not advancing from the group stage since 1986, so they will want to give their best against Argentina and beat the team of the best player in the world.
9:40 AM2 months ago

The FIFA World Cup Qatar 2022 has arrived with the mission of bringing new emotions, many joys and above all a lot of soccer in the search to see who will be crowned as the new monarch of the world. In this first phase of the tournament, the 32 teams will be divided into 8 groups of 4 members where each one will have to play three matches, that is, face the members of their group and only the first 2 of each group will be the lucky or deserved winners to advance to the round of 16 of the World Cup in Qatar, the two countries in third and fourth place will be eliminated and the path will only continue with 16 remaining teams. In this match, Poland and Argentina will face each other as part of the third date of the group stage in group C, both teams will be looking to get the three points and give a joy to their fans who have been present in their last two matches, cheering and supporting their national team.
9:35 AM2 months ago

Welcome to VAVEL.com’s LIVE coverage of the Friendly Match 2022: Poland vs Argentina!