Thank you for following Croatia vs Belgium on VAVEL, continue to visit the VAVEL portal to keep up to date with everything happening in the world of sports.
11:57 AM2 months ago

The match between Belgium and Croatia ends, the match is tied 0-0 and the runner-up of the World Cup qualifies to the round of 16.
11:52 AM2 months ago

4 MINUTES ADDED! Belgium is already going all out on the attack in search of a goal to qualify.
11:48 AM2 months ago

CROATIA IS SAVED! Lukaku takes a shot at the ball but it goes wide. Belgium are dying on the line.
11:42 AM2 months ago

Croatia continue to press forward down Luka Modric's flank but Belgium's defensive saga has managed to neutralize the attacks.
11:37 AM2 months ago

Belgium continue to push forward and advance the lines but have failed to get back into the box after Lukaku's misses.
11:28 AM2 months ago

MODRIC GOES FORWARD! The Croatian player receives and hits it as he can but Courtois dives to prevent the fall of his goal and revive the Croatian hopes.
11:21 AM2 months ago

CHANGES! In comes Thorgan Hazard and out comes Leandro Trossard as Belgium look for fresh legs for qualification.
11:12 AM2 months ago

Croatia begins to dominate more possession of the ball
11:12 AM2 months ago

The second half begins between Belgium and Croatia, both looking for the winning goal.
10:51 AM2 months ago

Four minutes are added to the first half, it is not clear where Belgium or Croatia can find the desired goal.
10:43 AM2 months ago

The match is very tight, both teams reach the box but are unable to score.
10:34 AM2 months ago

Kramaric's shot goes wide of the goal. Croatia continues to look for a goal to secure their qualification.
10:27 AM2 months ago

Another goal from Morocco is reported, with this score Croatia is qualifying as first and Morocco second. Belgium eliminated for the moment.
10:20 AM2 months ago

The VAR is called into action! The VAR calls the central referee to review the play and the referee says that it is not punishable. The penalty kick is disallowed.
10:19 AM2 months ago

The VAR is called into action! The VAR calls the central referee to review the play and the referee says that it is not punishable. The penalty kick is disallowed.
10:18 AM2 months ago

PENALTY FOR CROATIA! The referee calls penalty for Croatia and things get complicated for Belgium.
10:12 AM2 months ago

Belgium tries to attack with balls behind the center backs but Croatia has been able to hold the line to defend itself
10:08 AM2 months ago

Morocco is reported to be winning its corresponding match. With this score, Belgium is obliged to win against Croatia.
10:05 AM2 months ago

Perisic took a shot just as the game started and already had the Belgian goal shaken.
10:02 AM2 months ago

The match between Belgium and Croatia kicks off, both teams are looking to qualify for the Qatar 2022 World Cup.
9:49 AM2 months ago

In a couple of moments we will start with the broadcast of Croatia vs Belgium, match corresponding to the third day of the group stage of the Qatar 2022 World Cup.
9:46 AM2 months ago

This is the starting eleven that Belgium is sending to the field to face Croatia and snatch the qualification from them. 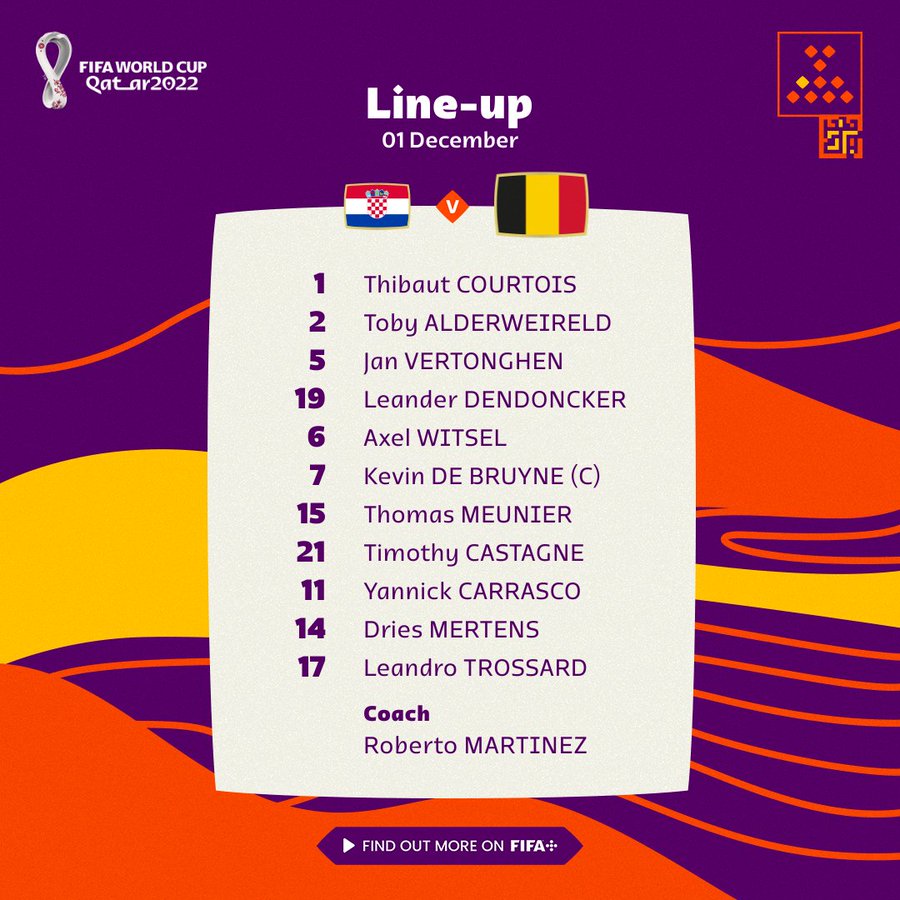 This is the lineup that Croatia is sending to secure its place in the round of 16. 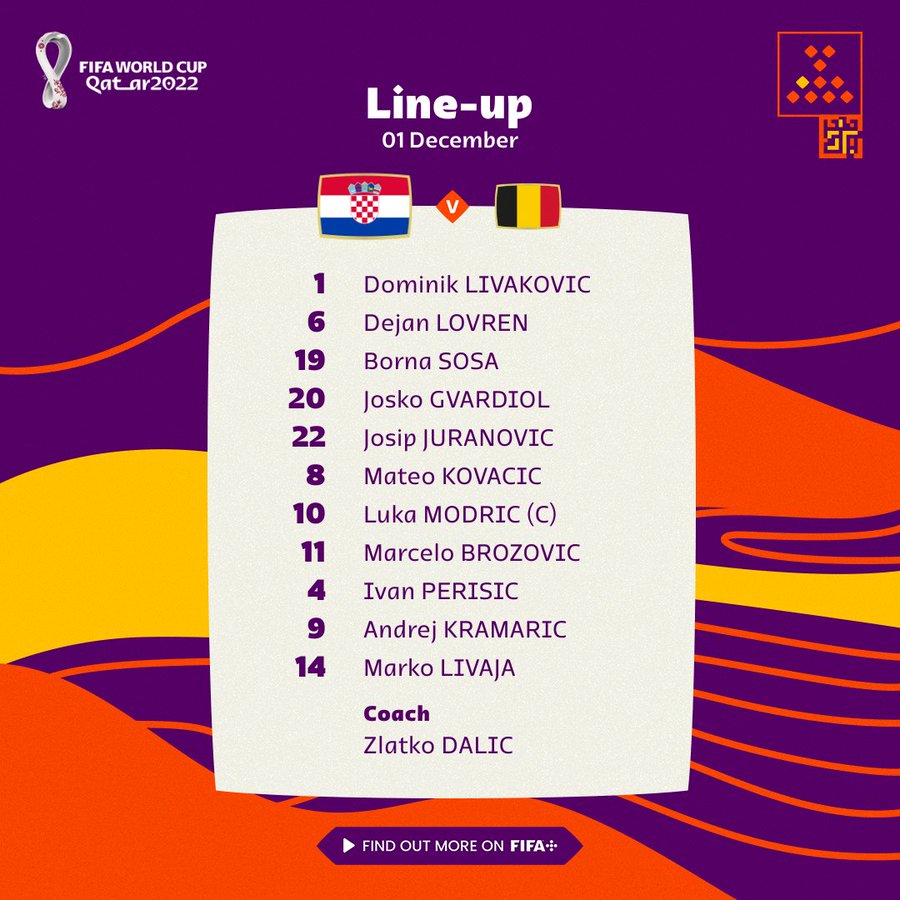 WHEN THE ROUND OF 16 WILL BE PLAYED

WHAT DO YOU NEED TO QUALIFY?

This will undoubtedly be one of the matches of the day. Belgium, which on paper was a candidate to fight for the World Cup, could be left out in the Group Stage if it does not get a win or a draw. If they finish third in the group, they could even finish as leaders, provided they win and Morocco does not beat Canada.

Croatia, meanwhile, could qualify for the round of 16 even if they lose against Belgium, but for that, the Moroccans would also have to lose against the Americans, who are no longer playing for anything as they reach the last matchday of the first phase with no points.

On the other hand, the Belgian national team faced Morocco with the objective of winning, since if they won, they would automatically qualify to the next round. However, they did not count on the surprise of the Moroccan team, which was vastly superior and quickly managed to make itself felt in the match, sealing a 2-0 victory and staying alive for the last matchday.
9:19 AM2 months ago

In the last match played by the Croatian national team, they faced Canada as part of date 2, who were playing for their lives because if they did not win, they would have to say goodbye to the World Cup. The match began with the dominance of the team from the land of the Maple, which was reflected in the scoreboard with a goal by Davies. However, the Croatian team was able to recover from the blow and managed to turn the score around with a 4-1 victory, sealing 80% of their place in the round of 16 and eliminating Canada.
9:14 AM2 months ago

The wait is over between Croatia and Belgium, both teams will once again play a World Cup match to define the lucky ones who will advance to the round of 16 in Group F. So far, Croatia is in the qualification zone, however, a defeat could take them out, on the other hand, Belgium needs a win to advance, since a draw would make them depend on Morocco's result.
9:09 AM2 months ago

Do not miss a detail of the match with the live updates and commentaries of VAVEL. Follow along with us all the details, commentaries, analysis and lineups for this Croatia vs Belgium match.
9:04 AM2 months ago

What time is Croatia vs Belgium match for World Cup Match 2022?

This is the start time of the game Croatia vs Belgium of 1st December in several countries:

Watch out for this player from Belgium:

The player to watch for this match will be the one who is today the best goalkeeper in the world; Thibaut Courtois. Currently, if we want to talk about leaders under the three posts, we must talk about the Belgian-born goalkeeper, Thibaut Courtois, after signing for Real Madrid, the goalkeeper began to demonstrate why he is in charge of defending the goal of the most coveted team in the world, becoming a human wall that conquered Europe last season. Now, as the defender of the Belgian goal, his duty will be to prevent them from breaking the deadlock until they reach the Qatar 2022 final. 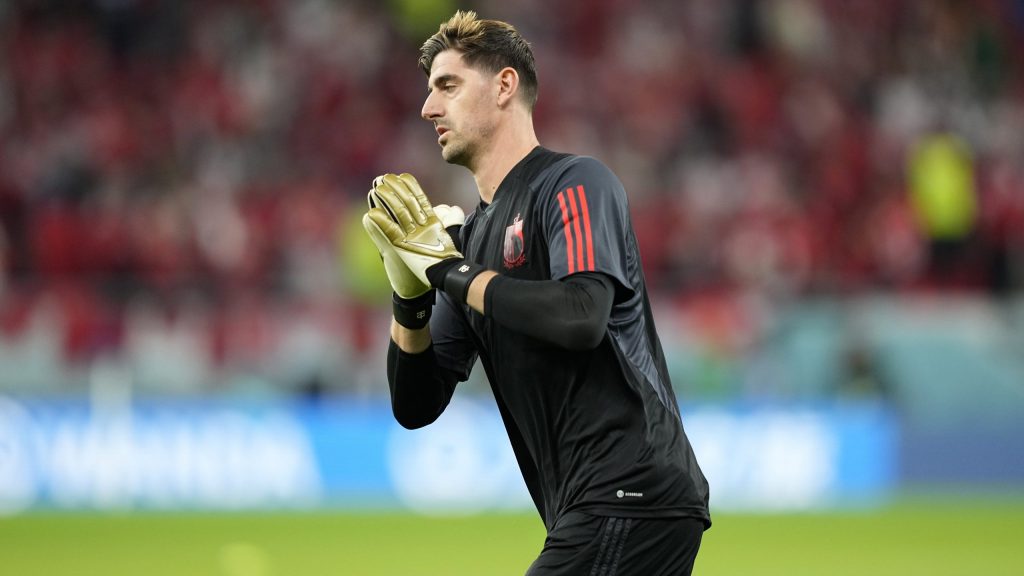 Watch out for this Croatia player:

The player to watch in these 90 World Cup minutes will be Real Madrid star and hero of the entire nation of Croatia, Luka Modrić. The Croatian midfielder became an icon after the great performance he had with his country in the Russia 2018 World Cup, after leading them in a surprising World Cup until the great final where they got their first World Cup runner-up. Currently Luka is one of the most important players in the midfield worldwide and he proved it last season being one of the most important pieces for Real Madrid to win the Champions League, now, in this World Cup he will seek to complete the feat not achieved, to return to Croatia World Champions. 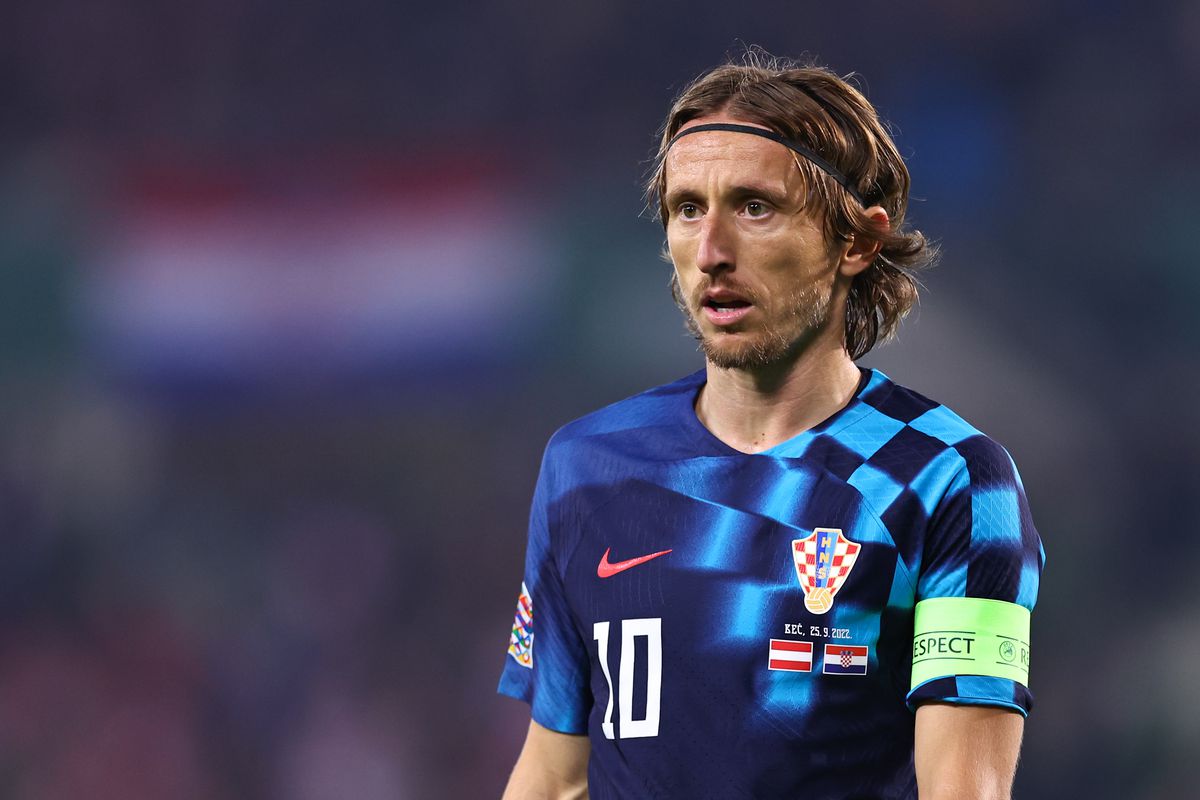 The Croatian national team and Belgium have met on a total of 8 occasions (3 wins for Croatia, 2 draws and 3 wins for Belgium) where the scales are totally balanced. In terms of goals, the Croatian team has scored 9 goals against Belgium, while the Belgians have scored 6 goals against Croatia.  Their last duel corresponds to an international friendly in 2021 where Belgium beat Croatia by the minimum.
8:34 AM2 months ago

The Áhmad bin Ali Stadium is a sports venue dedicated to the practice of soccer at professional level, it is located in Rayan, Qatar and was inaugurated in the year 2003, however, it had a reconstruction that ended in the year 2020 to host matches of the Qatar 2022 World Cup with a capacity for 60,000 spectators.

The Ahmad bin Ali stadium is inspired by the cultural symbols of Qatar to reflect the beauty of the desert and its surroundings, and also has a shopping mall inside the stadium. Once the World Cup is over, the capacity of the stadium will be reduced to 30,000 spectators.

The Ahmad bin Alin Stadium will still host one more World Cup match corresponding to the Round of 16 of between Group C First Place and Group D Second Place.

They got a big surprise

Belgium had started their World Cup adventure on the right foot after having beaten Canada by the minimum difference, who gave them a match worthy of a World Cup, however, Morocco prepared a surprise for the second match as they did not allow the Belgians to play comfortably on the field, causing mistakes that ended up costing them a tough defeat that left them as second in the group. Belgium can advance to the round of 16 with combinations of results but in their hands is also the opportunity to go through without complications with a victory.
8:24 AM2 months ago

For a place in the round of 16

The Croatian team is just half a step away from qualifying to the round of 16 of Qatar 2022, in their debut they drew 0-0 with Morocco and in the second match they won against Canada after beating them 4-1, the same result that helped them to position themselves as group winners. The team led by Luka Modric is just one point away from qualifying, however, they will have to beat Belgium, who will be looking for the three points to avoid being left out of the competition.
8:19 AM2 months ago

The FIFA World Cup Qatar 2022 has arrived with the mission of bringing new emotions, many joys and above all a lot of soccer in the search to see who will be crowned as the new monarch of the world. In this first phase of the tournament, the 32 teams will be divided into 8 groups of 4 members where each team will have to play three matches, that is, face the members of their group and only the first 2 of each group will be the lucky or deserved winners to advance to the round of 16 of the World Cup in Qatar, the two countries in third and fourth place will be eliminated and the path will only continue with 16 remaining teams. In this match, Croatia and Belgium will face each other as part of the third date of the group stage in group F, both teams will seek to obtain the three points and give joy to their fans who have been present in their last two matches, cheering and supporting their national team.
8:14 AM2 months ago

The Croatia vs Belgium match will be played at Áhmad bin Ali Stadium, in Rayán, Qatar. The kick-off is scheduled at 11:00 am ET.
8:09 AM2 months ago

Welcome to VAVEL.com’s LIVE coverage of the Friendly Match 2022: Croatia vs Belgium!