It's over! Germany turns the score around and ends up beating Costa Rica.
3:56 PM2 months ago

Musiala's shot ends up in the hands of Navas.
3:54 PM2 months ago

Matarripa's cross ends up in Neuer's hands.
3:52 PM2 months ago

Close! Havetz crosses and Füllkrug heads the ball over the goal.
3:49 PM2 months ago

Goal, goal, goal for Germany! Füllkrug sends in a lethal shot to make it four. The goal is validated after several minutes of review.
3:43 PM2 months ago

Goal, goal, goal for Germany! Havertz popped up to poke the ball home and take the lead.
3:39 PM2 months ago

A back and forth match, Costa Rica is looking for the third goal that will give them the victory and the pass.
3:31 PM2 months ago

Goal, goal, goal for Germany! Havertz receives the ball inside the box and shoots to tie the match.
3:28 PM2 months ago

Goal, goal, goal for Costa Rica! Vargas makes the most of Neuer's poor save to tip the ball into the back of the net.
3:23 PM2 months ago

Changes in Germany. Raum and Müller are replaced by Gotze and Havertz.
3:19 PM2 months ago

Close! Musiala's powerful shot, but the ball went to crash at the far post.
3:17 PM2 months ago

Goal, goal, goal for Costa Rica! After Neuer's rebound, the ball is left in the box and Tejeda pops up to tie the match.
3:11 PM2 months ago

Tejeda's shot, but Neuer keeps the ball.
3:06 PM2 months ago

Change per team. Germany bring on Goretzka for Klostermann. Costa Rica sends on Salas for Aguilera.
3:04 PM2 months ago

Halftime in the meeting. Germany wins by the narrowest of margins against Costa Rica.
2:43 PM2 months ago

Goalkeeper! Great save by Neuer, preventing Fuller's shot from entering his goal.
2:40 PM2 months ago

Kimmich's powerful shot, but the ball is well saved by Navas.
2:29 PM2 months ago

Venegas' cross, but Campbell fails to hold the ball inside the area.
2:24 PM2 months ago

Gnabry fails to control the ball inside the opponent's box and misses a clear chance.
2:18 PM2 months ago

Germany dominates the game, Costa Rica has had few opportunities
2:13 PM2 months ago

Goal, goal, goal for Germany! Gnabry finds Gnabry's cross and with a lethal header he opens the scoring for the first.
2:08 PM2 months ago

Close! Kimmich's cross is headed in by Müller, but the ball goes wide.
2:03 PM2 months ago

The first few minutes were quite intense, with both teams looking to reach the opponent's goal.
1:58 PM2 months ago

The actions in the duel begin.
1:53 PM2 months ago

Both teams are already on the field warming up before the start of the match.
1:38 PM2 months ago

Costa Rica is already at the stadium; the team will be looking for a win or a tie to advance to the round of 16.
1:33 PM2 months ago

Germany's World Cup has not been as expected, the Germans will be looking to emerge victorious and advance to the next stage.
1:28 PM2 months ago

It's time to win!

Germany needs to win if they want to stay alive in this World Cup, if they don't qualify it will be a major setback.
1:23 PM2 months ago

This is what Costa Rica's dressing room looks like with all the clothes ready to qualify to the next phase. 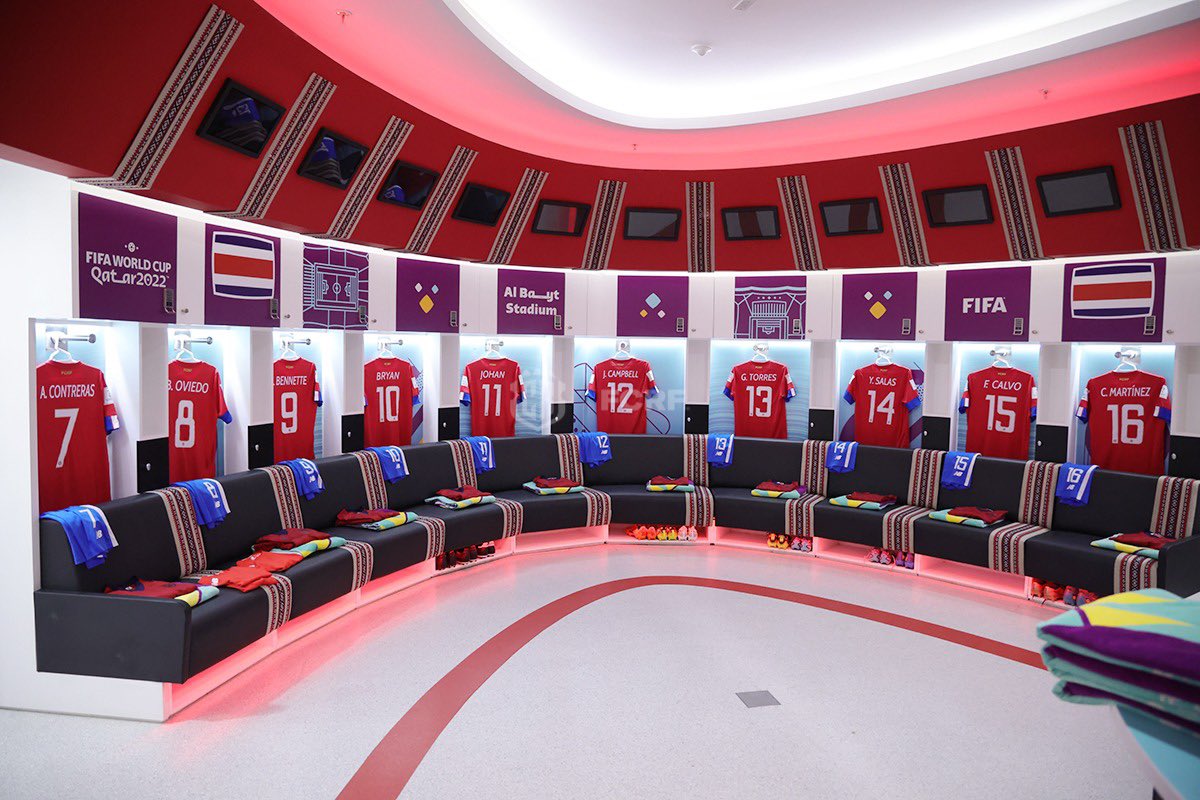 Costa Rica has won only one of the last eleven matches against European teams in World Cups, against Italy in 2014.
1:13 PM2 months ago

This match will be the first in a World Cup to be refereed by a woman, in addition to the all-female trio. Stéphanie Frappart will be in charge of the match, accompanied by Karen Diaz and Neuza Back.
1:08 PM2 months ago

Germany has won six out of eight matches against CONCACAF teams, with one draw and one defeat, the last being their loss to Mexico in 2018.
1:03 PM2 months ago

We're back for a minute-by-minute coverage of the Costa Rica-Germany match. We will shortly share with you the most relevant information, as well as the confirmed lineups.
12:58 PM2 months ago

Stay tuned for the Costa Rica vs Germany live stream.

In a few moments we will share with you the starting lineups for Costa Rica vs Germany live, as well as the latest information from the Al Bayt Stadium. Stay tuned for up-to-the-minute live coverage of the match on VAVEL.
12:53 PM2 months ago

Where and how to watch Costa Rica vs Germany live online

The match will be broadcast on TUDN, Sky Sports.

Costa Rica vs Germany can be tuned in from ViX live streams, Blue to Go App.

What time is the match of Costa Rica vs Germany, matchday 3 of the Qatar 2022 World Cup?

Hansi Flick spoke ahead of this important match: "I'm not going to say we're going to score eight goals. "It would be disrespectful, this is a head-to-head. Our game will also depend on the result of the other match."

"What I expect, if you look at the table, is that Costa Rica have a chance to advance if they draw and Spain win. That will be enough for them, so I assume they will try to defend as they did against Japan. It's not just up to us, we have pressure in this competition and sometimes that pressure can come in handy. It will be important that we find a solution to this."

"I'm an optimistic person, I don't consider the chances if we go down. I can't confirm it for my part (his continuity). I don't know what's going to happen, my contract runs until 2024, then there's a European Championship at home. We will have to wait for that date. We will approach the match with the intention of setting the tone from the start, with pressure. It's going to be difficult against a defensive team. We have to show the same attitude as we did against Spain.

On Niclas Fullkrug's repeat appearance against Spain, Flick said his introduction benefited the team in that game: "Not only did he score the goal, he also helped keep possession and close down passing lanes and inside lanes.

"I trust the referee 100 percent. She deserves to be here, we're really looking forward to it and I hope she is too. I'm sure she will do very well."

Luis Fernando Suarez spoke ahead of the match: "We are aware of how difficult it is going to be. We are aware of our chances. We are going to do our best. We are in good spirits. We want to do important things. We want to qualify. There will be a lot of attention and a lot of demands. I assume the opportunity with the greatest responsibility. We are playing for an entire country that wants to transcend. We have to think with a lot of responsibility and a lot of attention".

"It would be to disdain the capabilities of others. We have been able to show the group how Kimmich works, but not only that. The players have already been warned."

"It's possible that there will be changes. We will evaluate it until the end. We need to improve, we are aware of that. There is a good emotional contagion. The group can do important things to transcend in this World Cup. If we go on and Germany is on the way, it would be a source of pride. We are working for it. We went from day to night. After qualifying for the World Cup, it was like a piece of cake. Then the situation changed dramatically after losing 7-0. There was the unknown of how the group was going to respond. I'm happy with this group because they surprise me more and more. They said to each other 'they gave us a tremendous one, but we'll get out of this one'. I expect another surprise tomorrow.

"You have to respect any concept. Deep respect. I can't go on any diatribe about other people's opinions."

"They talked about the high pressure they have. You have to avoid it. They have a lot of density inside. We have to be compact. With the ball we have to have clarity. We have to know how to choose, when to have the ball and when to know how to make a transition. The players know how to play against Germany. I'm very calm about the meltdown when Calvo plays or when Vargas plays."

"I am a deep admirer of everything that women have conquered and want to continue conquering. This sport is very macho and I am pleased that they are getting to this point where they are now. It is good for soccer. It is opening up soccer to everyone. Soccer has always been very democratic and this step is very democratic. To have a woman referee a game at a World Cup."

"Everyone took this on as everyone's responsibility. It could have been a critical situation. The worst thing is to look for culprits. That's the hardest thing to handle. And that's what I didn't see.

How is Germany coming?

Germany has not had a good tournament, as they have failed to win in these two matches and depend on a victory in this match to qualify for the round of 16; in their last match they tied against Spain by one goal. 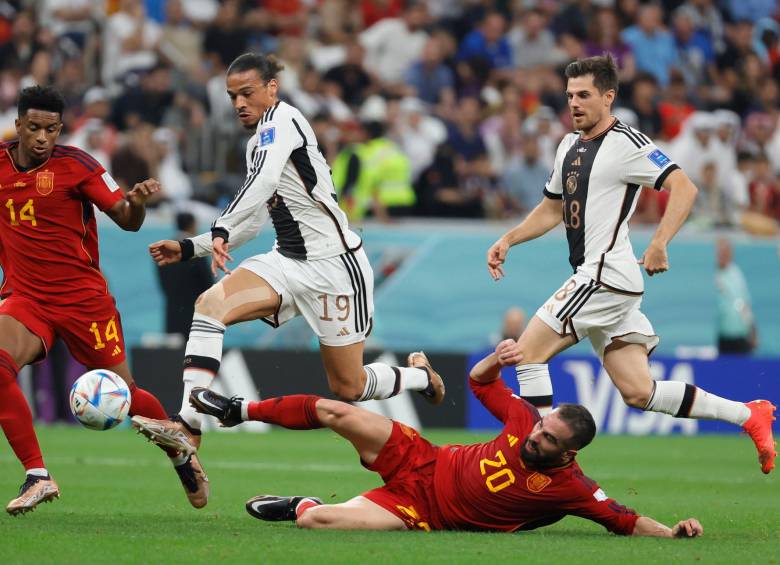 How does Costa Rica fare?

Costa Rica defeated Japan by the minimum in their last match, but in the previous match they were defeated by Spain by seven goals to zero. 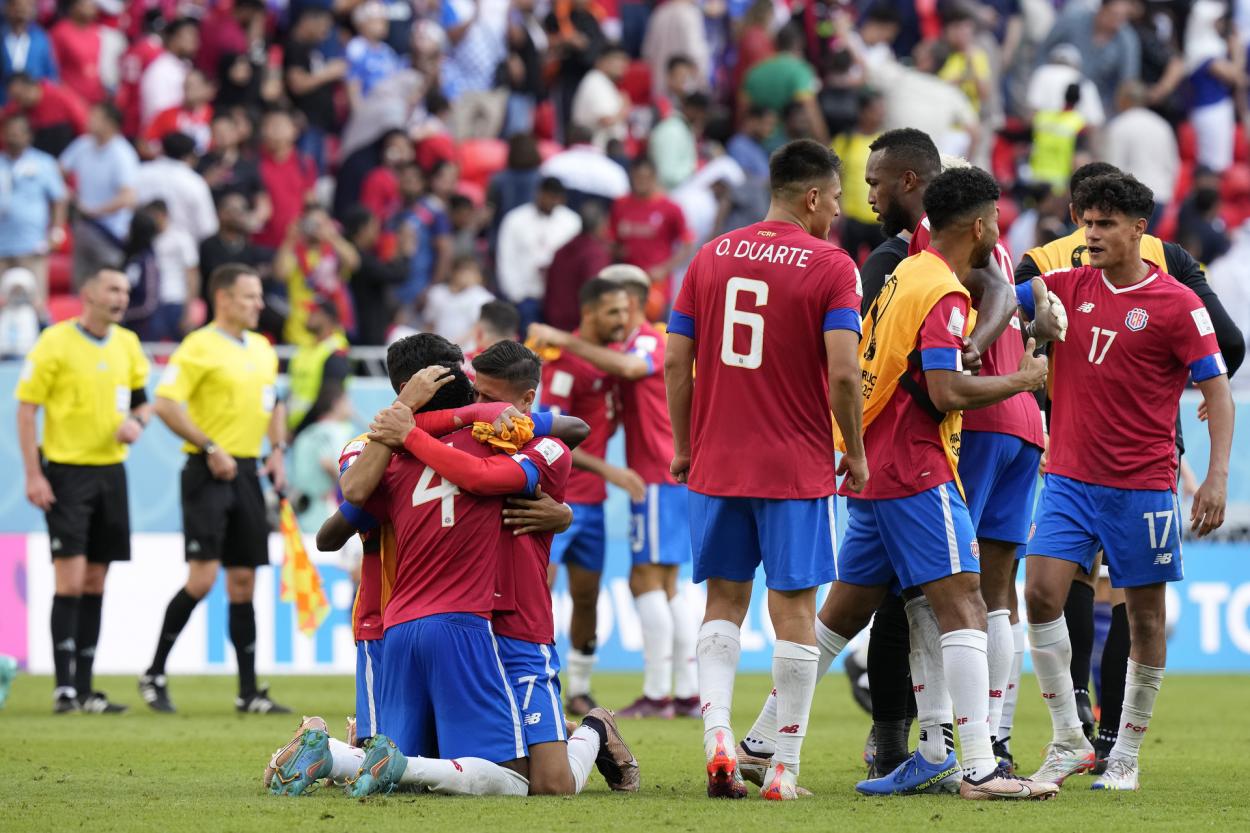 The match will be played at the Al Bayt Stadium.

The Costa Rica vs Germany match will be played at the Al Bayt Stadium, located in Doha, Qatar. The stadium has a capacity for 40,000 people.
12:08 PM2 months ago

Welcome to the Costa Rica vs Germany live stream, corresponding to Matchday 3 of the Qatar 2022 World Cup. The match will take place at the Al Bayt Stadium at 15:00 hrs.