Thank you very much for joining us to watch Brazil vs Cameroon matchday 3 of the group stage in group G of the Qatar 2022 World Cup. Follow the sports information on VAVEL.
4:00 PM2 months ago

Double yellow card for Vincent Aboubakar (Cameroon) who is sent off.
3:53 PM2 months ago

Nine minutes are added in Lusail.
3:48 PM2 months ago

Brazil remains the leader with seven points and Switzerland qualifies with six points after its partial victory over Serbia.
3:44 PM2 months ago

Ntcham (Cameroon)'s shot is blocked by Ederson!
3:34 PM2 months ago

Gabriel Martinelli (Brazil) has a shot blocked again by the goalkeeper!
3:14 PM2 months ago

Out: Alex Trelles, Fred and Rodrygo

Vincent Aboubakar (Cameroon) right footed shot from inside the box is off target!
3:06 PM2 months ago

The second half begins in Lusail!
2:49 PM2 months ago

Pierre Kounde (Cameroon) has a header blocked by Ederson (Brazil).
2:47 PM2 months ago

Four minutes of repositioning are added.
2:43 PM2 months ago

This score keeps Brazil as leader and helps Serbia to qualify as second.
2:37 PM2 months ago

Antony (Brazil) sees his shot blocked by the goalkeeper.
2:32 PM2 months ago

Alex Telles (Brazil) is fouled in attack.
2:15 PM2 months ago

Gabriel Martinelli (Brazil) sees his shot blocked by the goalkeeper.
2:12 PM2 months ago

Antony (Brazil) sees an effort go off target and wide to the left.
2:09 PM2 months ago

Antony (Brazil) header from outside the box is blocked.
2:01 PM2 months ago

The ceremonial acts and the small opening show begin.
1:53 PM2 months ago

Arrival at the stadium - Cameroon

Arrival at the stadium - Brazil

On the other hand, if Cameroon manages to qualify, it would only be enough to finish second, so it would play against Portugal.

The designated referee for this match is Ismail Elfath.
1:30 PM2 months ago

The game will start in 45 minutes from the Lusail Stadium. Both teams have already confirmed their line-ups.
3:00 AM2 months ago

In a few moments we will share with you the starting lineups for the Cameroon vs Brazil match, as well as the latest information from the Lusail Stadium in the city of Lusail. Don't miss a single detail of the match updates and commentary from VAVEL's coverage.
2:55 AM2 months ago

If you want to watch Cameroon vs Brazil on TV, your option is: DirecTV Sports, Telemundo, Tigo Sports, Sky HD and SporTV.

If you want to watch Cameroon vs Brazil on streaming, your option is: DirecTV Go.

What time is the Brazil vs Cameroon World Cup match?

This is the kickoff time for the Brazil vs Cameroon match on December 2, 2022 in several countries:

Venezuela: 3:00 AM on DirecTV Sports

Brazil also has its tactics for the match against Cameroon and Fabinho explained in a recent press conference:

He also referred to Cameroon's game against Switzerland:

"The Cameroon national team is very good. I think, in the first game against Switzerland, they even played better than them, and they created a little bit more chances, but after Switzerland scored, they got a little bit complicated. I have played against some of them, so I know them personally, but whatever the situation of our opponent, we will always try to shape our ideas on the field, play our game and, of course, always adapt to every situation."

Rigobert Song, Cameroon's coach, explained to FIFA his theory for beating Brazil. It's called "the theory of danger" and he explains it as follows:

"The theory is simple and came to me naturally. It applies to our daily lives as well."

"When you know you are in danger, you are actually no longer in danger, because you acquire awareness of that danger. However, when you don't know you're in danger, that's when you're (really) in danger."

He also commented that the theory occurred to him in the match against Algeria which was the definitive match for World Cup qualification and the Cameroonians, had the score against them:

"We were between a rock and a hard place, and we had no choice but to beat Algeria at home to qualify."

The five-time world champions have an extensive roster. Both starters and substitutes have a lot of quality and Brazil's age range allows for a mixed roster of young players and legends such as Thiago Silva and Dani Alves. Among all that list of players, there is one who has played an incredible World Cup and that is Richarlison. The 25-year-old striker, who plays for Tottenham Hotspur, has been a protagonist in this group stage, as he scored a brace in his debut in a World Cup against Serbia and had a great game against Switzerland.
2:25 AM2 months ago

Cameroon's star player is Eric Choupo-Moting. The 33-year-old Bayern Munich striker has already scored his first goal in a World Cup, precisely in the agonizing three-goal draw against Serbia. This is the Cameroonian player's third World Cup, debuting at South Africa 2010, then at Brazil 2014 and finally at Qatar 2022. In both competitions, Cameroon did not pass the group stage, so Choupo-Moting and the rest of his teammates will do whatever it takes to get that place.
2:20 AM2 months ago

Brazil has already qualified. Together with France and Portugal, they qualified for the round of 16 from the second day, as they won their two matches against Serbia and Switzerland. They have six points that keep them at ease, but they are still playing for the leadership of the group with the rest of the group, specifically with the Swiss, who are the most likely to qualify. Brazil will be without Neymar for this match, but for the next round, the Brazilian star will be back on the field.
2:15 AM2 months ago

Cameroon has a complicated outlook to qualify. Still without a win in the tournament and with one loss and one draw, they have only one point. To qualify, Cameroon would have to beat Brazil and for Serbia and Switzerland to draw goalless. Cameroon is also suffering from the departure of its first-choice goalkeeper, André Onana, who left the training camp after a couple of disagreements with coach Rigobert Song. Mathematically, Cameroon still has a chance and although the percentage is small, anything can happen in this World Cup.
2:10 AM2 months ago

The designated stadium for this match is the Lusail Stadium in the city of Lusail. It is a multi-sport arena and is the venue for several matches in this World Cup, including the final of the tournament. Its construction began in 2010 and was built exclusively for the World Cup. Although almost all Qatari stadiums have a particular design that represents some traditional element of Qatari culture, this stadium does not. It was designed by the late architect Albert Speer Jr. However, its design is of high quality, as its roof is covered with silver and its facade is covered with gold. It has its own hotel and several boxes for spectators. Ten matches will be played in this stadium, including the final of the competition. It has a capacity of 80,000 spectators and probably, when the World Cup is over, the stadium will be dismantled or its capacity will be reduced. 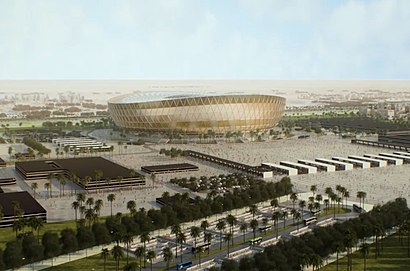 My name is Sofia Arevalo and I will be your host for this match. We will bring you pre-match analysis, score updates and live news here on VAVEL.