Thank you for following Arsenal vs Lyon on VAVEL. Continue to visit the VAVEL portal to keep up with all the latest sports news.
12:33 PM2 months ago

The match is about to end and the Gunners lower their intensity of the pace of play. Lyon, for their part, are just trying to keep possession of the ball.
12:02 PM2 months ago

A change of freshness at Arsenal. The entire squad comes out and the substitutes' bench comes in.
11:54 AM2 months ago

Tierney makes a great defensive cross to prevent the Gunners' frame from falling off
11:53 AM2 months ago

Dembeleé's shot goes over the three posts and he misses the chance to equalize.
11:44 AM2 months ago

The first half is over, Arsenal beat Lyon without complications.
11:13 AM2 months ago

GOOOOOOOOOL FOR ARSENAL! Vieira unleashes a left-footed shot that beats Lopes to score the third Gunner goal.
11:08 AM2 months ago

GOOOOOOOOOL FOR ARSENAL! Nkitiah hits the ball into the net for his second of the day.
11:00 AM2 months ago

Elneny dribbles inside the box and takes a shot that is well blocked by Lopes.
10:54 AM2 months ago

Caqueret tries to put a filtered pass between the lines to find one of his two strikers but the referee disallows the play due to an offside.
10:49 AM2 months ago

GOOOOOOOOOL FOR ARSENAL! Gabriel gets on the end of a corner kick and nails the first of the match for the Gunners.
10:46 AM2 months ago

Dembelé takes an awkward shot but the ball just bounces wide.
10:41 AM2 months ago

Nelson crosses to Nketiah but the Gunners' center forward does not finish well and misses the chance.
10:35 AM2 months ago

Odegaard's shot from mid-range ended up in the goalkeeper's hands, Arsenal had already warned.
10:30 AM2 months ago

The friendly match kicks off in Dubai, Arsenal and Lyon face each other in their preparation duel.
10:19 AM2 months ago

In a couple of moments we will start with the broadcast of Arsenal vs Lyon, duel corresponding to the friendly match 2022.
10:12 AM2 months ago

This is the starting eleven that Lyon sends to the field to look for the victory against Arsenal. 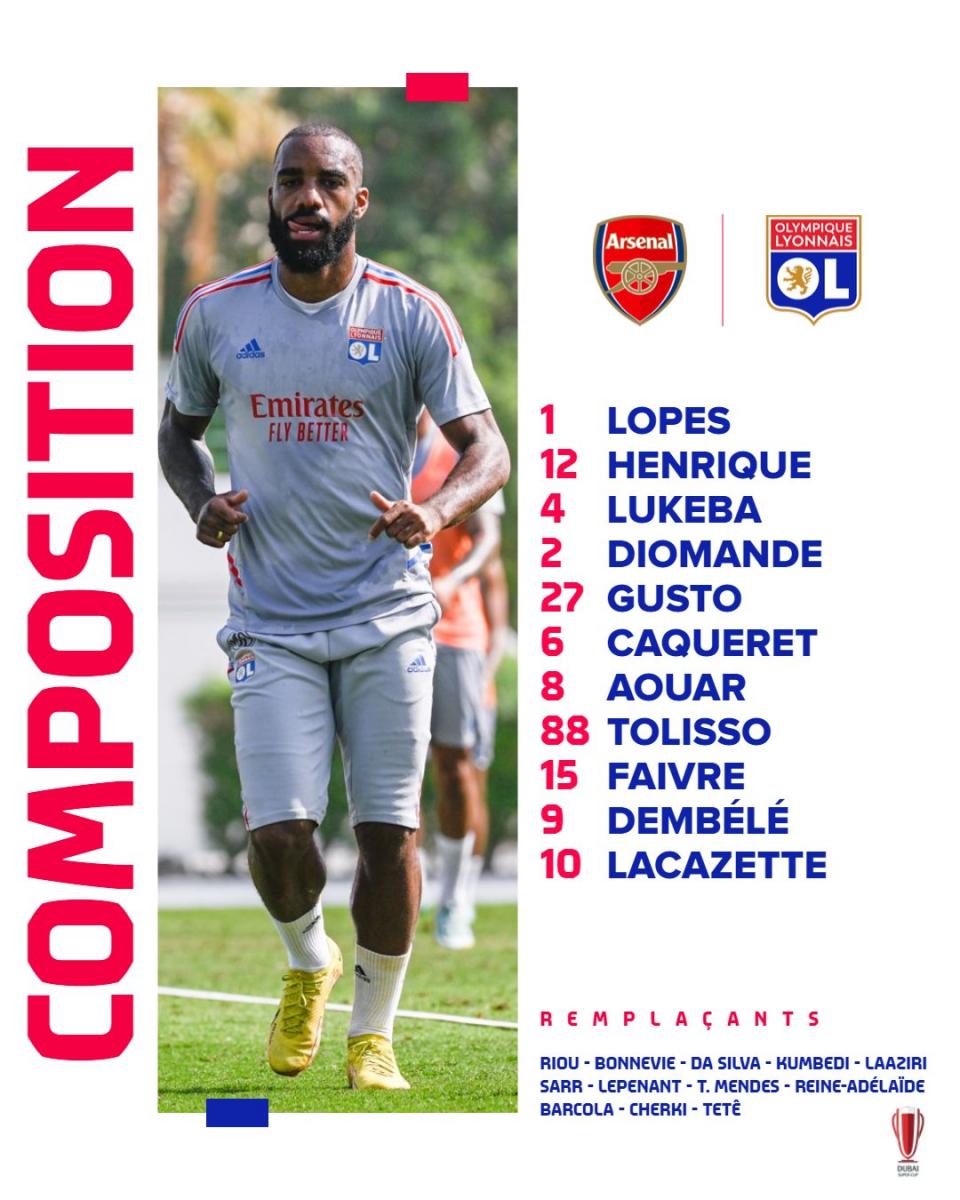 This is the starting eleven that Mikel Arteta sends to the field to seek victory against Lyon. 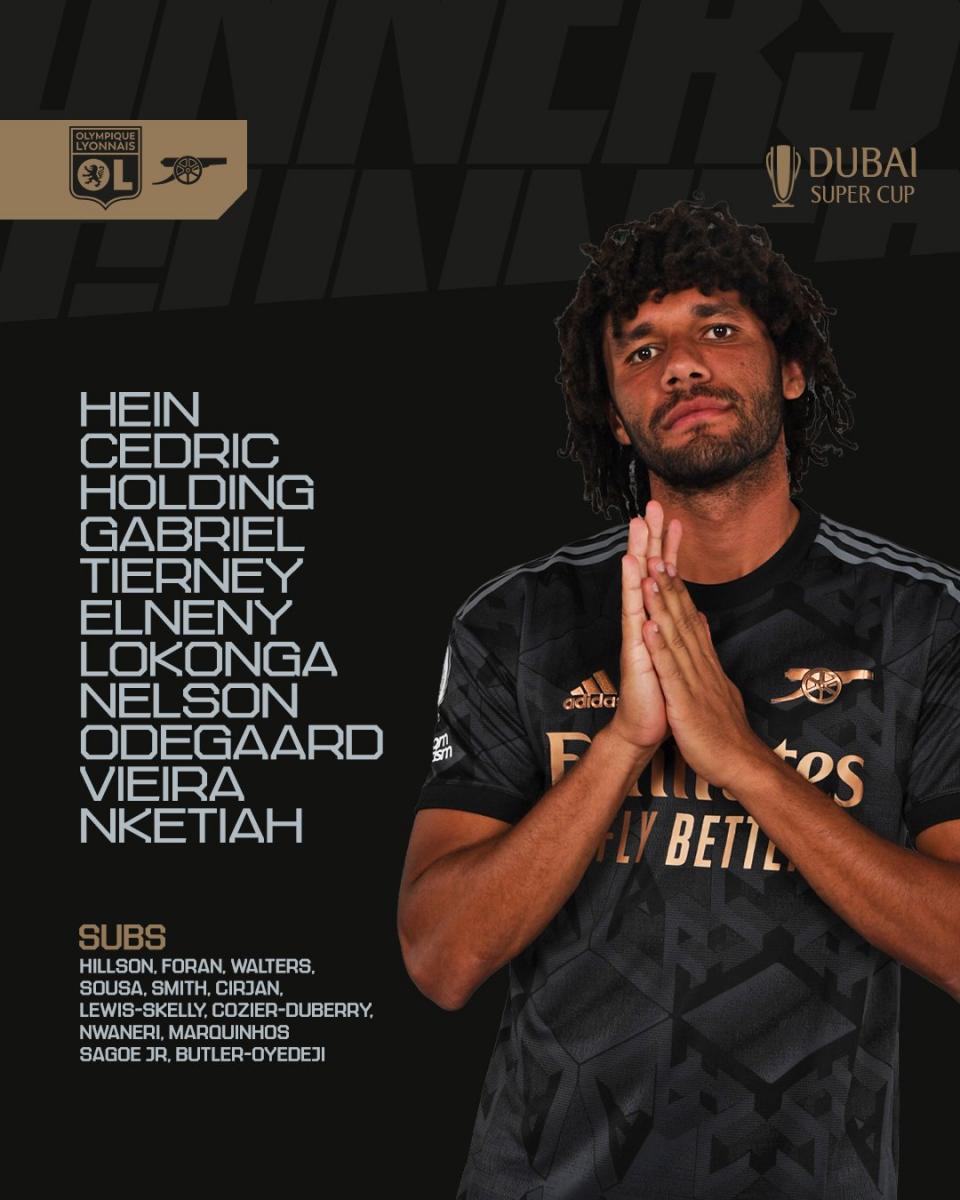 NO TEMPORARY SUBSTITUTE TO BE BROUGHT IN

After learning of Gabriel Jesus' injury, according to Football Insider, the Gunners will not turn to the winter market in order to locate a guaranteed replacement for the canarinho.The striker has undoubtedly more than earned the backing of manager Mikel Arteta at the Premier League leaders.
10:02 AM2 months ago

FC Barcelona has long been aware of the need to balance its economic balance, which is why the departure of the former PSV Eindhoven, Manchester United and Olympique Lyon striker could take place during the month of January and everything seems to indicate that there will be a return to his former home.
9:57 AM2 months ago

According to GiveMeSport, Arsenal is working on planning its squad for the second half of the season and one of the names that is sounding strong to arrive in the coming weeks is that of Leroy Sané. The objective is to reinforce their offensive zone in order to offer Mikel Arteta as many variants as possible.
9:52 AM2 months ago

On the other hand, Lyon faced Nice in the last matchday played in Ligue 1 1-1 so the fans could not go to the season break with the joy of a victory. Lyon are currently in mid-table in their respective domestic league, so they will be looking to prepare in the best way possible against English opponents to come back with everything they can in the second half of the season and climb up the standings.
9:47 AM2 months ago

Arsenal faced Wolves in their last Premier League duel where the Gunners managed to win 2-0 and continue to increase their lead in the league as leaders of the general table, and have been considered as the number 1 candidate to win the trophy in England. They are also still alive in the UEFA Europa League and will be looking for a double this season.
9:42 AM2 months ago

The wait is over, the World Cup actions are beginning to reach their final stages and this means the resumption of the leagues around the world, so the teams are already starting to work on the preparation of the squads since there will be a couple of dates to play before leaving for the Christmas vacations. In this match, Arsenal and Lyon will face each other to prepare for the restart of their respective championships and get one more victory before the end of the year.
9:37 AM2 months ago

Do not miss a detail of the match with the live updates and commentaries of VAVEL. Follow along with us all the details, commentaries, analysis and lineups for this Arsenal vs Lyon match.
9:32 AM2 months ago

What time is Arsenal vs Lyon match for Friendly Match?

This is the start time of the game Arsenal vs Lyon of 7th December in several countries:

Watch out for this Lyon player:

The player to watch for this match will be the attacking midfielder, Maxence Caqueret, the current Defensive Midfielder has been an important piece throughout the season for Lyon and he proved it by scoring last match, now, he will look to break the nets again and be the difference that balances the scales in favor of his team. 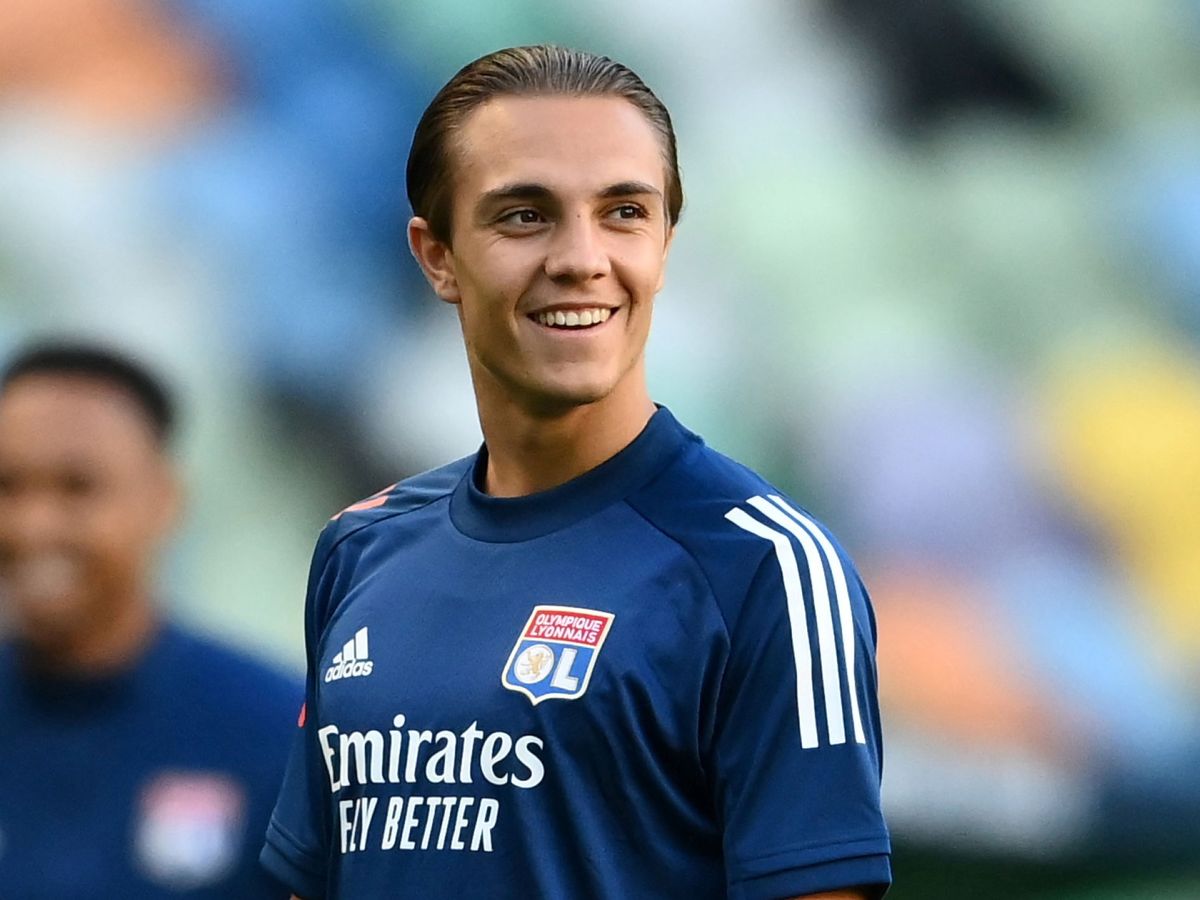 Watch out for this Arsenal player:

The player to watch for this match will be the attacking midfielder, Martin Ødegaard, the current Gunners pivot has been an important piece throughout the season for Arsenal and he proved it last match, now, he will look to break the nets again and be the difference that balances the scales in favor of his team. 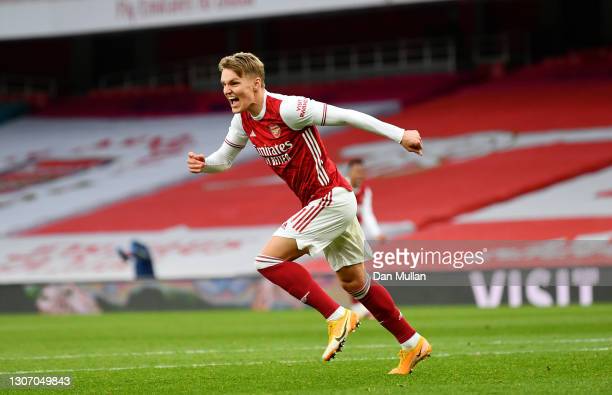 Arsenal and Lyon have met on 3 occasions (1 win for the Gunners, 1 draw and 1 win for Lyon) where the scales are completely even. In terms of goals, 3 have been in favor of Arsenal and 3 in favor of Lyon. Their last duel dates back to the 2019 season in a friendly where Lyon beat Arsenal 2-1.
9:02 AM2 months ago

The stadium was one of the venues of the 1996 and 2019 Asian Cup where it hosted seven matches, also, it hosted the 2003 U-20 World Cup where Group D matches and two round of 16 matches were played.

To iron out mistakes

Lyon will use this match to continue improving, find details and fix mistakes within the team, as they are currently in eighth place in the overall Ligue 1 table with 6 wins, 3 draws and 6 defeats. Likewise, in their last match they drew 1-1 with Nice, a good result for their current situation, however, this does not discourage them to return with the desire to come back for the second part of the season and try to reach European positions.
8:52 AM2 months ago

Aiming to win the Premier League in 2023

Arsenal closed the first part of the season or before stopping for the World Cup with a victory at home against Wolverhampton Wolves by a score of 0-2 and as far as the Premier League is concerned closed in position 1 of the overall table with 12 wins, 1 draw and 1 defeat, being a statistic that puts them as the number 1 contenders for the Premier League title and for now they are securing European places, in addition, they are qualified in the round of 16 of the UEFA Europa League so the possibility of winning this season's championship is high. Arsenal will have to come back stronger than ever to continue to secure their place as Premier League leaders and try to increase their advantage over the other teams in the quest for the championship.
8:47 AM2 months ago

The 2022-23 season is just a few days away from returning after having stopped engines due to the Qatar 2022 World Cup, which is why the teams must start preparing for the resumption of the season as there are still dates to play before the end of the year, and also start working with an alternate squad to the one presented at the beginning of the season as they must temporarily cover the absences of players who went to participate in the World Cup and have not been able to train in rhythm with their corresponding team. In this match, Arsenal will face Lyon in a friendly match in order to get ready for the restart of the Premier League and Boxing Day, so it will be important to test the players and the rhythm of the Gunners' team.
8:42 AM2 months ago

The Arsenal vs Lyon match will be played at Estadio Al-Maktoum, in Dubaí, UAE. The kick-off is scheduled at 10:30 am ET.
8:37 AM2 months ago

Welcome to VAVEL.com’s LIVE coverage of the 2022 Friendly Match: Arsenal vs Lyon!