Thanks for joining us in this game

Thank you for joining us in the broadcast of the PSV Eindhoven vs Vitesse match, we are waiting for you at VAVEL for more broadcasts.
4:03 PM11 days ago

The referee whistles the end of the game, PSV won the match.
4:02 PM11 days ago

PSV Eindhoven has accumulated 3 corner kicks, 5 shots on goal and 59% possession of the ball.
3:46 PM11 days ago

PSV Eindhoven keep pressure on the entire field in search of a defensive error.
3:43 PM11 days ago

PSV Eindhoven keep pressure on the entire field in search of a defensive error.
3:23 PM12 days ago

PSV Eindhoven looking to score their first goal and put pressure on the entire pitch.
2:37 PM12 days ago

Bad news for PSV, Luuk de Jong is injured and is replaced by Johan Bakayoko.
2:26 PM12 days ago

First yellow card of the game and it is for the player Mitchell Dijks from Vitesse.
2:20 PM12 days ago

A very even game, no team dominates the game and we are still waiting for the first dangerous play of the game.
2:10 PM12 days ago

Tight match in midfield, both teams looking for their first chances to score.
2:03 PM12 days ago

These are the XI players that will start the match:
1:58 PM12 days ago

These are the XI players that will start the match: 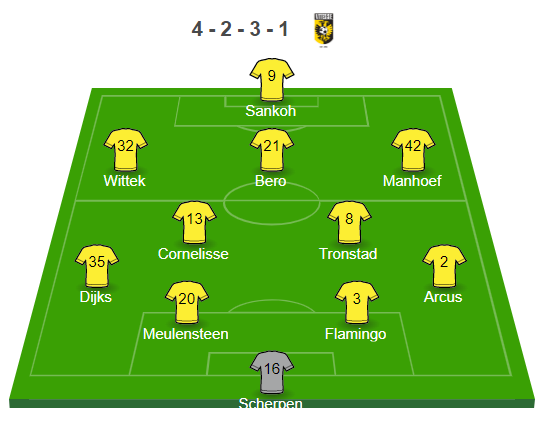 The referee appointment for today's game is as follows:

A great match between these two teams from the Netherlands is coming up. Do not take off and below we share the statistics of both teams in their last confrontation.
1:17 PM12 days ago

The last time these two teams met was on February 12, 2022 and on that occasion the match ended in a 5-0 win for PSV Eindhoven at the Gelredome. That confrontation was full of fouls, yellow cards, corner kicks and many goals that we hope will be repeated today.
1:10 PM12 days ago

The Eindhoven team is already in the stadium and is ready for its fifteenth game of the 2022-2023 season.

We are just under an hour before the game between PSV Eindhoven and Vitesse kicks off at the Philips Stadion. Both teams will go out looking for victory. Who will make it this afternoon? Follow our coverage on VAVEL.
10:00 AM12 days ago

Do not miss a detail of the match with the live updates and commentaries of VAVEL. Follow along with us all the details, commentaries, analysis and lineups for this PSV Eindhoven vs Vitesse Eredivisie match.
9:55 AM12 days ago

What time is the PSV Eindhoven vs Vitesse match for Eredivisie Match 2023?

This is the start time of the game PSV Eindhoven vs Vitesse of January 21st in several countries:

There are three Vitesse players that we should keep an eye on and that play a very important role in the team. The first is midfielder Matus Bero (#21), he is the team's top scorer in the tournament with 3 goals in 16 games played and he scored in the last game against Go Ahead Eagles. Another player is Maximilian Wittek (#32), he plays defense and at 27 years old is the team's top assister with 5 assists in 15 games. And finally, we should keep an eye on defender Million Manhoef (#42), he is the second highest scorer on the team with 3 goals in just 15 games played. He has been a great substitute who gives the team a change every time he steps on the field.
9:35 AM12 days ago

Vitesse in the tournament

Vitesse had a bad start to the season in the Eredivisie, he is at the bottom of the tournament. Until week 16 of the tournament they have a total of 15 points with 3 games won, 6 tied and 7 lost. They are located in the fourteenth position of the general table and if they want to steal thirteenth place from Fortuna Sittard they must win the game. Saturday's game will be very difficult as PSV Eindhoven is one of the best teams in the Eredivisie and they have only lost four times in the entire tournament. Their last game was on Sunday, January 15, 2023, in a 0-0 draw against NEC Nijmegen at the Gelredome for their sixth draw in the tournament. They arrive as the least favorites to win this game since they are playing as a visitor, however they could surprise and win.
9:30 AM12 days ago

The next three players are considered key to PSV Eindhoven's attacking attack and any one of them is likely to be able to score or assist in the game against Sparta Rotterdam. Midfielder Xavi Simons (#7) is the team's top scorer in the 2022-2023 season with 9 goals in 16 games and also the best assister with 4 assists. He will be very important for the game because of his experience and his control of the ball on the pitch. Another player is Guus Til (#20), he plays in the midfielder position and is the second highest scorer of the team with 5 goals in 14 games played. He got his fifth last game against FC Emmen and could get his sixth on Saturday. Finally, midfielder Joey Veerman (#23) who is a very important player for creating dangerous plays. He is the second highest assister on the team with 3 assists.
9:25 AM12 days ago

PSV Eindhoven in the tournament

The Eindhoven soccer team started the 2022-2023 season of the Eredivisie (first soccer division of the Netherlands) well, they are in fourth position in the general table with 10 games won, 2 tied and 4 lost, getting 32 points . PSV Eindhoven seeks to be at the top of the tournament this season, so they must win as many games as possible and they will become champions. Their last game was on January 15, it ended in a 2-2 draw against Fortuna Sittard at Fortuna Sittard Stadion and thus they got their second draw in the tournament. They arrive as the favorites to win this game, because of the great team they have and the good moment they are going through. They also have an advantage when playing at home and that their fans can support them.
9:20 AM12 days ago

The Philips Stadion is located in the city of Eindhoven, the Netherlands. It will host this match and has a capacity of 35,000 spectators. It was inaugurated on December 12, 1910 and is currently the home of PSV Eindhoven that plays in the Eredivisie.
9:15 AM12 days ago

Welcome to VAVEL.com’s LIVE coverage of the Eredivisie Match: PSV Eindhoven vs Vitesse!